Hungary announces that they will veto the punishment operation in Brussels

Poland is Not Alone Before Brussels: a Nation Does Honor to Its Old Bonds of Brotherhood

On Wednesday the European Commission activated the procedure to sanction Poland for its judicial reform, which could leave the Slavic country without the right to vote in the European Union.

As I have already pointed out, the most shocking aspect of this punishment operation is that influential EU countries - among them France and Germany - maintain a dubious independence of Justice, and yet they are not sanctioned. Is there a double yardstick in the EU?

It is not the first time that Poland is practically alone

In any case, it is clear that Poland's position is delicate. As at other times in its history, the Rzeczpospolita is practically alone in the face of danger. It was when Russia, Austria and Prussia divided their territory, deleting it from the map in 1795 (ironically, in 1683 Austria would have been erased from the map and Europe would have been under Turkish rule if the Polish King Jan III Sobieski had not come to his aid, obtaining a spectacular victory in Kahlenberg). Two years after reappearing on the map, in 1920 Poland was invaded by the Red Army and almost no country came to its aid; moreover, all the ambassadors - except the British and the Pope's Nuncio - left Warsaw in the proximity of the Soviet forces. Only a handful of US aviators volunteers, the Kościuszko Squadron, came to the aid of the Poles, who miraculously defeated the invaders in the end, preventing a communist invasion of Europe.

In 1939 France and the United Kingdom declared war on Germany after it invaded Poland, but not a single French or British platoon put its feet on Polish soil to help them (the Polish fighters who managed to flee did help the defense of France in 1940, and the Polish pilots had a prominent role in the Battle of England that same year to stop the German bombing of the island). After the war, the Western allies, who had received the help of Poland (was the fourth country that contributed more human resources to the Allied side), left the Polish people in the hands of Stalin. After sacrificing themself in the defense of France, in Narvik, in the skies of England, in Tobruk, on the slopes of Montecassino, in Breda, in Ancona, in Loreto, in Berlin and in other places that many have forgotten, after watering Europe with Polish blood to regain the freedom of others, the Poles were not even allowed to participate in the Victory Parade in London on June 8, 1946. Treason after treason, the Poles took half a century to recover their freedom, reconquered in 1989.

The old brotherhood between Hungarians and Poles

But this solitude has not always been absolute. Since the Middle Ages the Poles maintain a relationship of camaraderie and brotherhood with the Hungarians. An old Polish song says the following:

Pole and Hungarian — two brothers,
Good for saber and for glass,
Both courageous, both lively,
Let God bless them.

In 1919 there was a people that offered to send 30,000 fighters to support Poland against the Soviets: Hungary. That help could not come because Czechoslovakia did not let them pass through their territory, but in the absence of being able to send soldiers, the Hungarians sent weapons to their Polish friends. In March 1939, when the Hungarians regained their millenary common border with Poland in the passage of Verecke, the Polish and Hungarian border guards embraced, as if they were brothers who had been separated for a long time (it is the moment that reflects the photo that head this post). In September of that year, and in spite of the good relations between Hungary and Germany, the Hungarians did not allow the passage of German troops by Verecke to invade the south-east of Poland. In the same place that the Germans wanted to cross, the Hungarians allowed the government of Poland and tens of thousands of fighters to flee, to continue the fight in France. In 1944, when the Varsovians rose up against the Nazis, the Hungarian Army not only allowed many to flee, but also provided them with weapons and other supplies; some soldiers of the Royal Army of Hungary even joined the Polish insurgents; seven Hungarians fell in the combats and today their bodies rest in Polish land, next to their Polish brothers.

The often forgotten cause of the Hungarian Revolution of 1956

When in October 1956 thousands of Poles rushed to protest against communist oppression (a revolution today almost forgotten, which had its epicenter in Poznan and was brutally repressed by the communists, with dozens of dead), tens of thousands of Hungarians took to the streets in Budapest, carrying a Polish flag to the monument to József Bem, the Polish patriot who had supported the Hungarian Revolution of 1848 (as seen in the photo below); that was the beginning of the Hungarian Revolution of 1956, one of the biggest popular uprisings against communism. To this day, both countries celebrate their mutual friendship every March 23. It is a unique case in Europe. 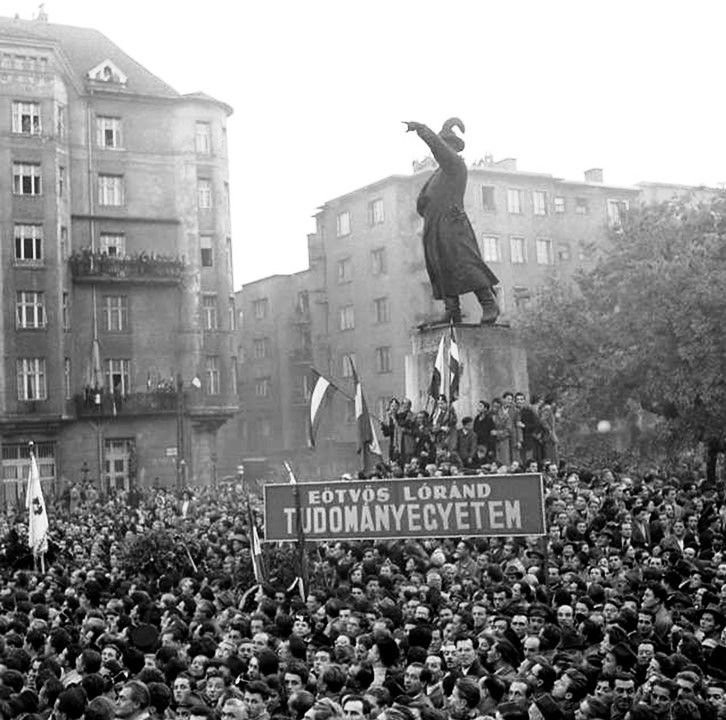 The Hungarian president comes out in support of Poland

For Hungarians and Poles, succoring each other in the face of adversity has long been a matter of honor. They are peoples who have spilled their blood together in defense of freedom. That is why no one would have missed a predictable news: Hungarian President Viktor has announced that he will veto the punishment operation of Brussels against Poland. "It is not even worth starting the process against Poland since there is no possibility of carrying it out. Hungary will be there and will form a barricade that they will not be able to overcome," Orbán warned, adding: "no European decision can be taken to punish Poland, because Hungary will use its right to avoid this." He also pointed out clearly that "if someone attacks Poland, all of central Europe is being attacked. Without Poland there is no strong central Europe."

A question of honor in an increasingly materialistic Europe

It must be said that the start of a formal warning procedure to Poland must be approved by four fifths of the 28 member countries of the European Union. Taking into account the relations of servility that France and Germany have created with the distribution of European funds, it is foreseeable that Brussels will have that support. Then the matter would pass the European Parliament, where the Brussels elites will also have no problems to get enough support. However, the final step requires the unanimous support of the member countries in the European Council. That is where Hungary will exercise its right of veto. And they will be able to do it not only because they has that right, but also the reason to exercise it, because this operation of punishment against Poland is an abuse in a Europe where almost all the judicial systems are strongly intervened by the political class; in the end, they were only looking for an excuse to punish Poland for its firm defense of Christianity, something intolerable for the progressive elite of Brussels. An elite that is believed to be able to fold entire countries based on threats of economic sanctions, as if that only mattered. For the Hungarians this is a matter of honor, as it was to support the Poles against communist oppression in 1956. It is worth recalling now that the European Union is becoming increasingly similar to the Soviet Union, including the imposition of ideological theses contrary to the the Christian values ​​on which the roots of Europe are based, values ​​that the Poles and Hungarians are not willing to renounce.