Orbán: the EU "wants to dilute the population of Europe and to replace it"

Last Thursday Hungary celebrated the 170th anniversary of its 1848 Revolution against the Austrian Empire. In Budapest there was a large march that brought together tens of thousands of people.

In the rest of Europe, with the exception of Poland, this call has barely been reflected in the main media. But the images speak for themselves, as seen in this video posted by the Hungarian Prime Minister Viktor Orbán on his Facebook page:

The presence of Polish flags in the march has been striking. In fact, at the end of the march, Orbán has started his speech - which can be read in English in Visegrád Post - addressing his "Polish friends":

"Our closeness is natural, and our embrace is a source of strength. In the time of our forefather Kossuth, it was written that "Hungary and Poland are two imperishable oaks which have grown two separate trunks, but whose roots have intertwined. Therefore the existence and strength of one is the precondition for the life and health of the other". It is no different today: if Poland is strong, then Hungary cannot be lost; if we are strong, we can help our Polish friends. Therefore the Peace March is not simply a rally for the cause of our country, but also a stand we take alongside Poland. Honour to Poland! Honour to Hungary!" 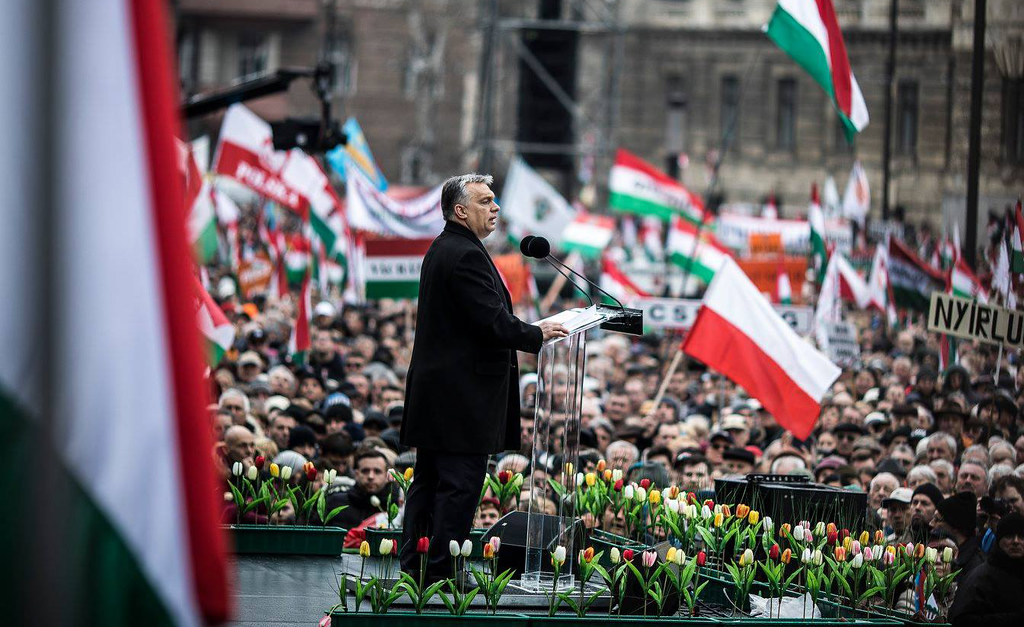 In addition, Orbán has defended the "Christian culture" of Hungary and Europe against the Hungarian billionaire George Soros, who is financing leftist organizations in several countries to promote government policies favorable to their ideological dogmas:

"We have grown from Christian culture, and we make a distinction between a person and their actions. We have never hated anyone, and we shall not hate anyone. On the contrary, we continue to believe in the power of compassion and solidarity. But we shall fight against what the empire of George Soros is doing to Hungary, and what it wants to do to Hungary. This is our homeland, this is our life, and we have no other. Therefore we shall fight for it to the end and we shall never surrender."

Orbán also referred to Brussels and its policy favorable to the massive influx of immigrants:

"Brussels is not defending Europe and it is not halting immigration, but wants to support it and organise it. It wants to dilute the population of Europe and to replace it, to cast aside our culture, our way of life and everything which separates and distinguishes us Europeans from the other peoples of the world. It will be small consolation that the peoples of Europe will not forgive those leaders who completely changed Europe without first asking its people. Let us be proud of the fact that we are the only country in the European Union which has asked people whether or not they want mass immigration."

The Hungarian Prime Minister also mentioned the importance of Christianity in the definition of the national identity of Hungary:

"It truly is a mystery how after so many defeats we have always risen up again. And how could it be that we are still here after one thousand years? Perhaps because we have always known that our existence has a meaning beyond ourselves. We have always known that here there is a culture, a soul and a spirit which over the centuries has lifted hearts, consoled people and sustained us. We have a uniting and unifying notion: we have national self-respect. We have not drifted so far from Christianity that our anchor chain has broken. Of course sometimes our faith is rocked, and at such times our national pride is also dented. But we have never given them up, and so we have not lost them; and therefore they rise up again and again, overflowing and conquering hearts."