This Saturday has celebrated the 30th anniversary of the fall of the Berlin Wall. The unification of the two Germanies took place on October 3, 1990. But what happened to their armies?

The armed forces of communist Germany were officially called Nationale Volksarmee (NVA, National People’s Army) and were divided into four branches: the Land Forces (Landstreitkräfte), the Peoples Navy (Volksmarine), the Air Forces (Luftstreitkräfte) and the Border Troops (Grenztruppen). Prior to reunification, East Germany abandoned the Warsaw Pact (the alliance of the USSR and its satellite countries) on September 24, 1990 (the Pact was finally dissolved on July 1, 1991). The NVA was dissolved on the eve of the unification, on October 2, 1990. At the time of its disappearance it had more than 176,000 military personnel, half of them professionals.

Although today the process of union of the two Germans is known as “unification”, in reality what happened between both was an absorption of communist Germany by free Germany. The same thing happened with their armies. The NVA was absorbed by the Bundeswehr (Federal Defense, name received then and still today by the armed forces of free Germany). At the time of the disbanding of the NVA, all its means, materials and facilities became part of the Bundeswehr. However, all those resources were excessive for the new unified Germany, so that almost all the old NVA facilities were closed, and most of their material was sold or scrapped.

The material that was not preserved by the Budeswehr included 767 aircraft, 208 vessels of various types, more than 2,199 artillery pieces, 2,761 battle tanks, 9,467 armored vehicles, 133,900 wheeled vehicles, 1.3 million firearms and more of 300,000 tons of ammunition. Scrapped material, sold or delivered to museums included all 549 T-72 tanks that passed to the Bundeswehr. A part of all weapons systems owned by East Germany was transferred to the United States for analysis. The scrapping of former T-55 tanks from the East German army, after German reunification (Image: Budeswehr).

The greatest jewel of all military equipment that passed from the NVA to the Budeswehr were the 24 Mikoyan-Gurevich MiG-29 “Fulcrum” fighters newly released by East Germany (between 1988 and 1989 this country had received 20 single-seaters MiG-29A and 4 two-seater trainers MiG-29UB). These planes were very advanced for the time, and they flew for some years with the Luftwaffe emblems. Finally, of the 24 airplanes one was scrapped, another (a single-seater) was sent to the Berlin Military Museum, where it is currently preserved, and the remaining 22 were sold in 2004 to Poland for the symbolic amount of 1 euro (to the Polish Air Force, which still retains these planes, cost 43 million euros to modernize them). 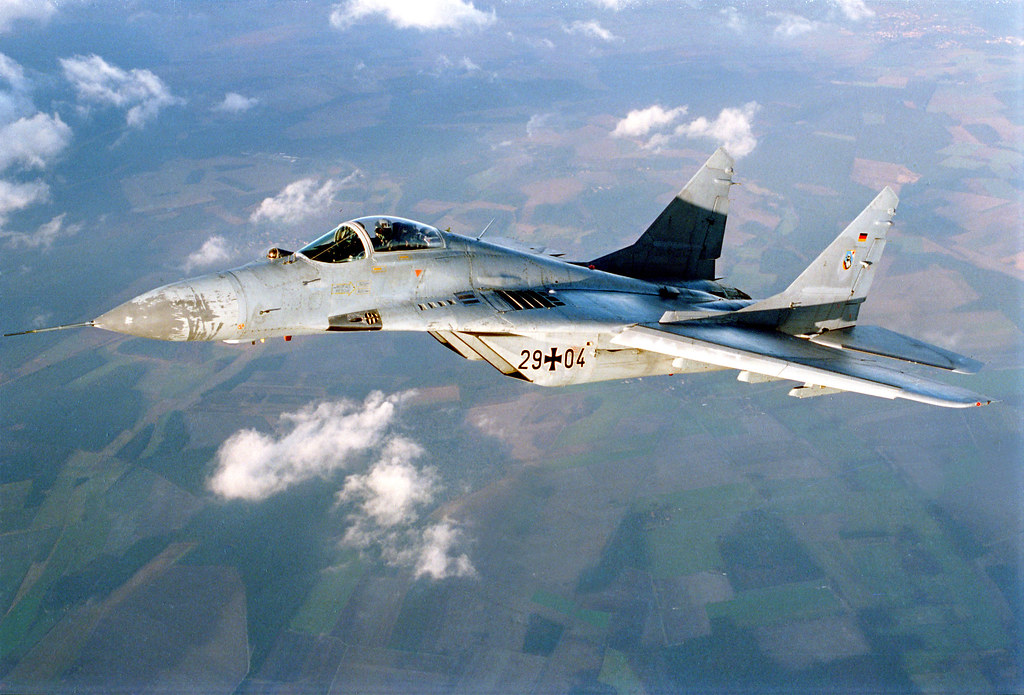 One of the former MiG-29 fighters of the Luftstreitkräfte of communist Germany flying with the Luftwaffe emblems after reunification (Photo: Budeswehr). 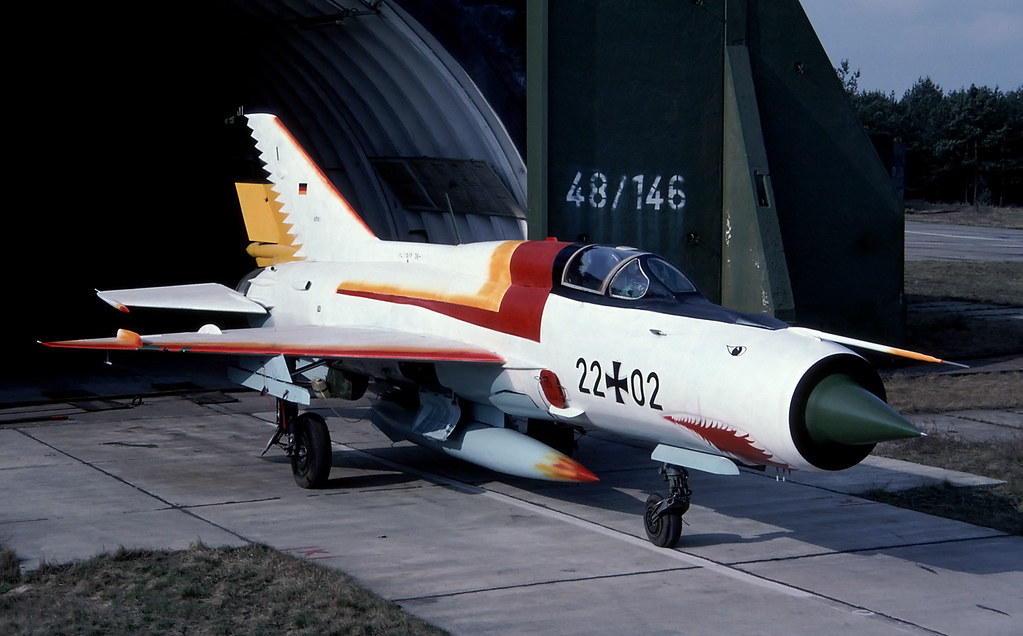 As for the Peoples Navy, many of its ships – most of them mine-hunters, small missile ships and smaller vessels – were sold to various countries and others were scrapped, since the Bundeswehr had no special interest in conserving that entire fleet. Some of the ships were preserved in museums. Among the countries that acquired old material from the Volksmarine was Spain, which in 1992 bought one of the seven transport ships of the Darss class that had belonged to East Germany, specifically the “Jasmund”, launched in 1982. It was literally purchased “by weight”, paying 24 euros per ton, and was renamed “Alerta” A-111 and today is an electronic warfare ship, with secret equipment and dedicated, among other tasks, to intelligence missions. It is, without a doubt, one of the least known ships of the Spanish Navy. 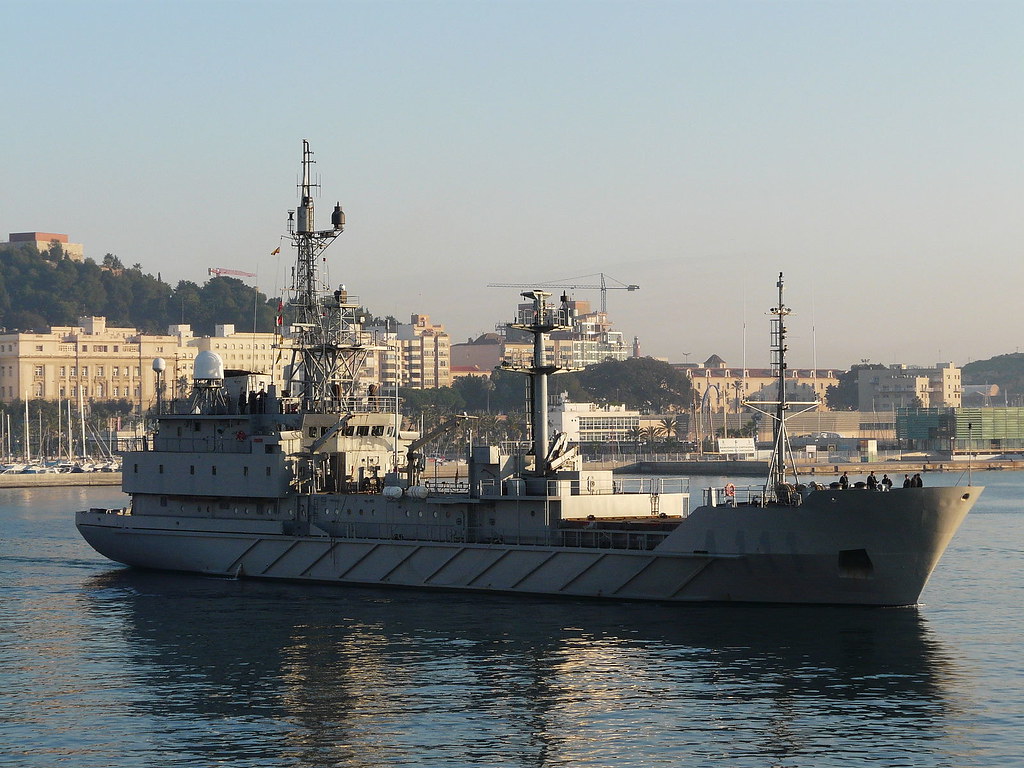 The former transport ship “Jasmund” of East Germany, currently serving with the Spanish Navy as an electronic warfare ship with the name “Alerta” A-111 (Photo: Antonio Galán Cees).

The integration of the NVA military in the Bundeswehr

With regard to personnel, at the time of reunification, Germany met with armed forces that included almost 600,000 soldiers, among those who already belonged to the Budeswehr and those who had belonged to the disbanded NVA. With the integration there was a paradox: the new comrades in arms came from armies that had been considered enemies, and whose formation in the case of the NVA included a strong Marxist ideological burden. The former NVA soldiers who passed to the Bundeswehr were provided with new uniforms and had to spend a period of adaptation. Military of the NVA folding the flag of communist Germany for the last time before its integration into the Bundeswehr (Image: Bundeswehr).

Even before the disappearance of the NVA, the training of its officers had begun to be transferred to the Budeswehr. On September 9, 1990 280 officers of the NVA air forces joined the Luftwaffe School of Officers to adapt to their future duties. On September 12, 1990, the two Germany, the United States, France, the United Kingdom and the USSR had signed a treaty that limited 370,000 military personnel of the future unified Germany. After the merger of the two armed forces, the vast majority of the NVA officers were licensed, as well as a considerable part of the noncommissioned officers. None of the East German military with rank superior to Lieutenant Colonel joined the Budeswehr. Many of the NVA officers and non-commissioned officers who passed the Bundeswehr saw their graduation reduced by up to two ranks. Likewise, all the women who served in the NVA were licensed, because by then Budeswehr still did not admit women (something that changed in 1993). At present it is estimated that only 20% of the Bundeswehr troops come from the NVA. Until 2005 it was legally considered that for the sake of history, former members of the East German army came from a foreign army, which harmed them in terms of pensions. Unlike veterans of the Budeswehr, NVA veterans who left the service with reunification are not allowed to indicate their rank with their name in civil life.

In the case of the Border Troops, they were disbanded a few days before the other branches of the NVA, on September 30, 1990. Its 15,000 members were licensed. This corp is credited with the deaths of 1,200 people who tried to flee to free Germany or West Berlin, a fact that had made communist Germany, in practice, a huge prison. After the reunification, only 4,500 of the former members of the Border Troops were recruited by the Budeswehr to dismantle the border barriers between the two Germans that they themselves had guarded. 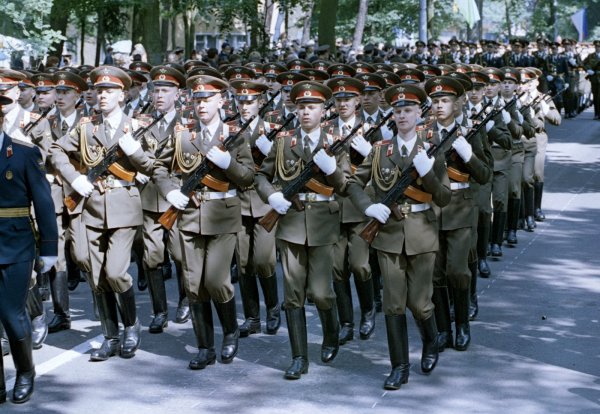 Soviet troops in Germany in the unification and withdrawal in 1994

On the other hand, it should be noted that in 1989 there was still an important Soviet military force stationed in East Germany, a presence that had not ceased since World War II. In total, there were 337,800 soldiers, accompanied by more than 200,000 family members, including 90,000 children. Its withdrawal was not easy or fast, and Germany had to contribute money for the process, but in the last days of the USSR and in the first days of Russia, that power faced serious economic problems.

In the material sphere, Soviet forces in the former territory of East Germany included 276 barracks, 47 air bases, 116 training camps, 4,200 tanks, 8,200 armored vehicles, 3,600 pieces of artillery, 106,000 wheeled vehicles, 690 aircraft, 680 helicopters, 180 missile systems and 677,000 tons of ammunition. On June 25, 1994 the Russian forces made a farewell parade in Berlin, and on August 31 of that year the last Russian soldiers left Germany after almost half a century of military presence in that country.