A Director of a Progressive Newspaper Explains Her Goal in 2018: “Kill All Men”

The Huffington Post (now called HuffPost), a progressive media in whose Spanish edition the PRISA Group participates, is once again controversial due to the efforts of one of its collaborators.

According to Justin Caruso in The Daily Caller, on Friday, December 29, Emily McCombs, a Huffington Post journalist, published a tweet with the following text: 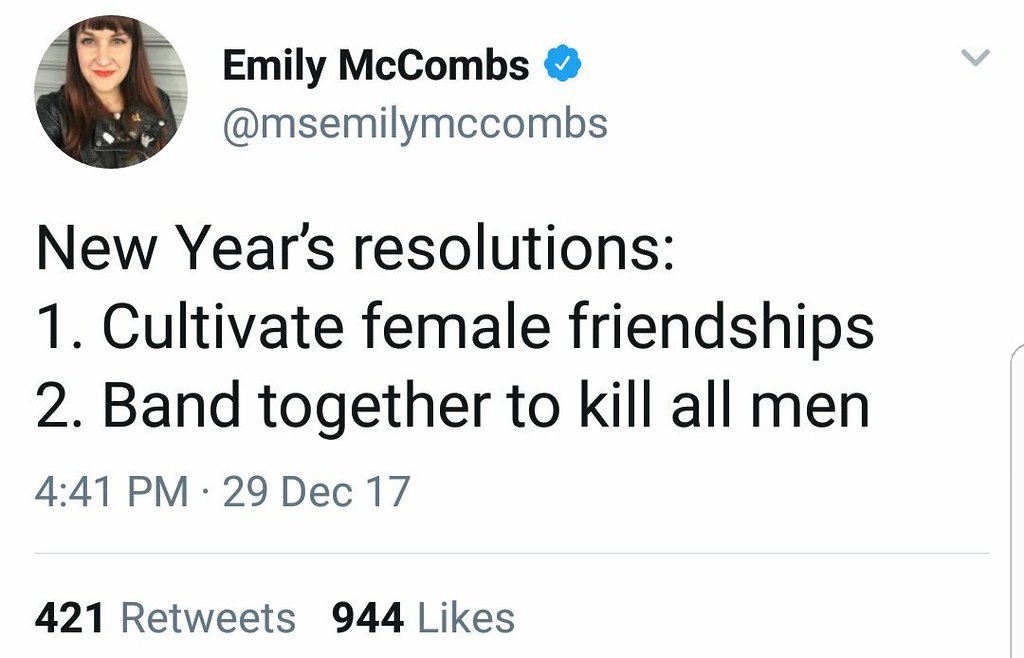 This journalist, who in her Twitter biography appears as “Editor HuffPost”, has more than 21,000 followers in that social network and her account is verified. Because of the reactions to this tweeting, McCombs has put a lock on his Twitter profile, so that only followers accepted by her will be able to read her comments. But by then on Twitter there were already circulating a multitude of captures of his controversial wish list for the year that has just begun.

McCombs says she has ‘feminist nightmares’ about her little son

In her page of author of the HuffPost, McCombs appears as Editorial Director of Parents of that media. Her articles usually deal with family issues, and she also takes the opportunity to present her feminist theses. Occasionally she even brings up his misandry, even to refer to the son she adopted in 2014. In April of last year she wrote an article entitled “4 tangible things I do every day to raise a feminist son”, in which she stated the following : “As a feminist mom to a 5-year-old boy, I fear the day when the “man” part kicks in.” And then she explains that in her “feminist nightmares” she can “imagine a future in which my own spawn makes some woman feel as voiceless as the boys in my high school once did”. The curious thing is that one of the tips is to propose her life as a single mother. Will she think that married mothers are bad mothers?

If you do not like the pink and yellow Power Rangers, are you a rapist?

A few months later, in November, she published another article entitled “I don’t know if I can raise a good man”. In this article she bluntly exposes her worst thoughts about her own son (according to her, now the child is 6 years old): “When I became the mother of a son, I thought I’d dodged a bullet. All I had to do, I figured, was make sure he never raped anybody, and I’d be OK. These days, that seems like a pretty tall order.“ A few paragraphs below she refered to her previous article, stating the following:

“Of course, we all want to raise feminist sons. I wrote an article a few months ago detailing the ways I try to do just that. But my efforts are starting to seem like grains of sand against a steady wave-crash of misogyny and rape culture.“

And what is this woman based on to think that her son is going to become a rapist? He says it in another paragraph: “my son loves Power Rangers, “except the pink and the yellow ones.” He scoffs also at the pink Wonder Woman shirt he used to wear before he started school and began picking up gender stereotypes like a communal cold.” If a child does not like Wonder Woman and the pink and yellow Power Rangers, that makes him a potential rapist? It’s crazy. In her article, McCombs began to look for guilty everywhere: from the sports of the TV – “that the whole neighborhood cheers for through our too-close and poorly insulated walls”, she states – until the cartoons of Peppa Pig. Finally, she confesses that she is giving up with the child (let’s remember that she is only 6 years old): “Children never fully belong to their parents. I started losing mine to the world of men years ago.“ And then she explains her difficulty finding male references for her son that fit her particular ideological views: “when I look around at the adult men I know, I’m not sure exactly who I’m supposed to be raising him to emulate. Even the men whom I love and trust seem tied up in knots about this gender business“.

A month later, the author of those lines affirms on Twitter that one of her goals for this year is “to kill all men”. I wonder if social services will do something. Imagine for a moment what would happen if a Christian father spoke like that in a social network. How long would it take to lose custody of your children? Recall that according to a law passed a few months ago, Canada can withdraw custody of their children to parents who oppose the gender ideology. The same ideology that promotes hatred of men, presenting us all as oppressors and even as rapists and murderers. It is time to raise your voice: the frightening thing is not that a child dislikes the color pink, but that someone who would like “to kill all men” is proposing mandatory guidelines to indoctrinate the children of others.