Thousands of prisoners used in its construction were buried in it

The Road of the Bones: a mass grave of the stalinist genocide of 2,000 km long

There are roads associated with sinister stories, but none can be compared to the Russian federal highway of Kolymá, or M56, known worldwide as the Road of Bones.

A road linked to the Gulag, the web of concentration camps of the USSR

This icy route (the average temperature there is around -50ºC, with extremes of -70ºC) has a length of just over 2,000 kilometers, that is, something more than what measures the shortest road route between Madrid and Munich, in the south of Germany. The road connects Yakutsk, a city with some 300,000 inhabitants in eastern Siberia, with Magadan, a city of 92,000 inhabitants on the shores of the Sea of Okhotsk. During the dictatorship of Stalin, many of the prisoners of the Gulag, the huge web of concentration camps created during the Lenin regime, passed through Magadan.

The region of Kolymá, which gives its name to this road, was a territory known for its abundance of Gulags. Hundreds of thousands of zeks or political prisoners passed through it. One of them was the Russian writer Varlam Shalamov, who was imprisoned in several camps in that region for 17 years and wrote his experience on that horror in a work entitled “The Kolyma Tales”, which began to spread in the 1960s. Aleksandr Solzhenitsyn also wrote about the fields of Kolymá in his famous work “Archipelago Gulag”:

“Kolyma was the greatest and most famous island, the pole of ferocity of that amazing country of Gulag which, though scattered in an Archipelago geographically, was, in the psychological sense, fused into a continent — an almost invisible, almost imperceptible country inhabited by the zek people. “

An area rich in deposits of gold and uranium

The interest of the Stalin regime in that remote region was due to its abundant deposits of gold, and later to uranium. In the end, the Gulag ended up being a huge supplier of slaves, condemned by any pretext, with two main purposes: extract the valuable mineral from the bowels of the earth and liquidate the enemies of the communist regime. 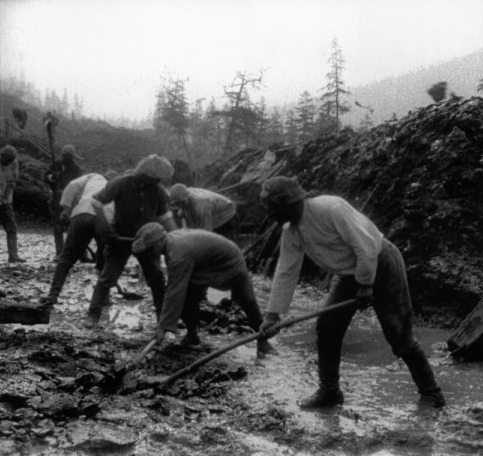 Prisoners of the Gulag working on the Kolymá highway (Photo published by Tomasz Kizny in “Gulag: Life and Death Inside the Soviet Concentration Camps”)

Among the slaves who were sent to that white hell of Kolyma there were not only Russians: many prisoners were Poles deported after the Soviet invasion of eastern Poland in September 1939. The Soviet occupation of Lithuania, Latvia and Estonia also provided labor slave of these three Baltic republics for the mines and the Kolymá road. Although Stalin’s “gold rush” to Kolymá had begun in 1929, the only possible year-round access was by boat from Khabarovsk, which made that region an island in the middle of an ocean of snow and ice. In 1932 the construction of the city of Magadán and the Kolymá highway began, in order to exploit more gold deposits throughout that region. To this purpose, about 80 concentration camps were built in Kolymá, led by the Latvian Eduard Berzin, an officer of the Cheka, the brutal political police created by Lenin.

The corpses of the prisoners were buried in the road

In Kolymá, hundreds of thousands of prisoners of the Gulag died, many of them by freezing. It is said that the Kolymá highway cost one death for every meter of road built. The work was done with very rudimentary methods, such as shovels and wheelbarrows, and when the prisoners died -something very usual-, the sentries did not bother to bury them, but left their corpses in the foundations of the road, using the meat as mortar and the bones as substitutes for the stone. Hence, the route is known today as the “Road of the Bones”: in fact, to circulate on it involves traveling over a colossal mass grave that houses many thousands of corpses.

Driving on the Kolymá highway today

To this day, this white hell is being depopulated. The reason is obvious: among the localities located in the Carretera de los Huesos is Oimiakón, a small town of less than 500 inhabitants that has the record of showing the lowest temperature recorded so far in an inhabited area: -71.2°C. Most of the year the route remains covered by snow or mud, being one of the most dangerous roads in the world. Paradoxically, the road is safer in winter than in spring, because when the melting begins, the route fills with mud and fallen trees, and the bridges that form the ice on the rivers disappear. You can see here a recording of some sections of that route made in August 2014:

Every year the Kolymá highway charges dozens of lives in traffic accidents. To these dangers, and as Wikitravel points out, we must add the presence of hungry bears and ticks – which transmit encephalitis in the depopulated areas (that is, in most of the route). On the route there are also ghost towns such as Kadykchan, to which the blog Fronteras dedicated a post. Next to this road is also the Gulag de Dneprovsky, one of the rare Soviet concentration camps of which there are still remains (the rest were dismantled almost in their entirety before the fall of the USSR). You can see here a video of a trip in the middle of winter on the highway of Kolymá: