The sober ‘Beacon of the Dead’ of Monteferro: history of the Monument to the Universal Navy

In the Galician Lower Rias, specifically in Nigrán (Pontevedra, Spain), is the Monteferro Peninsula, on top of which there is a big granite monument with a statue of the Virgin of Mount Carmel.

There are some websites that date this monument in 1913, but the data is wrong. The most reliable information about this monument can be found in issue 20 of the bulletin “Glaucopis” of the Boletín de Estudios Vigueses, in an article entitled “Remains of consular life in Vigo (1653-2002)” written by Gerardo González Martín. This document indicates that the idea of ​​the monument was of Arthur Nightingale, British consul in Vigo since 1915. Shortly after the end of the World War I in November 1918, Mr. Nightingale proposed to build a monument in the Cíes Islands in memory of the Spanish merchant sailors disappeared during the war. González Martín comments that “the national newspaper El Sol entered the fray, when publishing an article by the Count of Santibáñez del Río highlighting the lack of suitability of the chosen place”. Manuel Gómez Román, architect of Vigo, supported the opinion of the Count, who proposed to raise the monument in Monteferro. 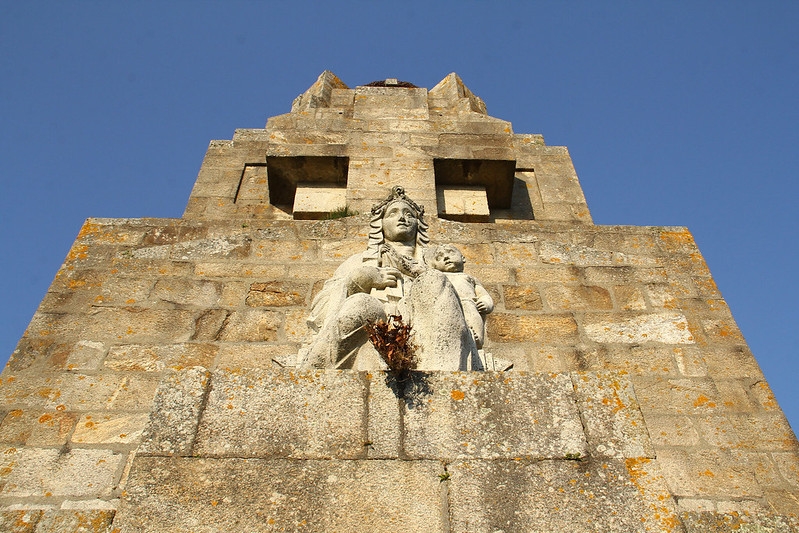 According to González Martí, La Gaceta de Madrid (which was the equivalent of the Official State Gazette at that time) published the authorization of the monument in 1924. I searched for that authorization in the La Gaceta archive, but unfortunately I have not found it. On the east face of the monument, the date of July 28, 1924 is currently the date of its inauguration, and this usually leads to confusion. That date corresponds to the act of placing the first stone of the monument, an act attended by the president of the Military Directorate, Miguel Primo de Rivera -who was the one who laid the first stone-, together with the generals Severiano Martínez Anido, Luis Bermúdez de Castro, Minister of War, and Ángel Rodríguez del Barrio, Military Governor of Vigo.

The act counted with the blessing of the Bishop of Tuy, Manuel María Vidal Boullón. According to González Martín, in that act of placing the first stone “there were gathered, according to the media, no less than a thousand people”. The businessman Tomás Mirambell Maristany, founder of the Vigo Mercantile Circle and chairman of the monument’s promoter committee, made the offering speech: “We wish that all men who cross these seas when they see it feel the emotion of being greeted by Spain, knowing that the Spanish soul thought of them when erecting it.” Rafael Areses, engineer of the afforestation also gave a speech. Below these lines you can see a photo of the construction process, appeared in number 275 of “Vida Gallega”, in May 1925, and published by ValmiñorTV. 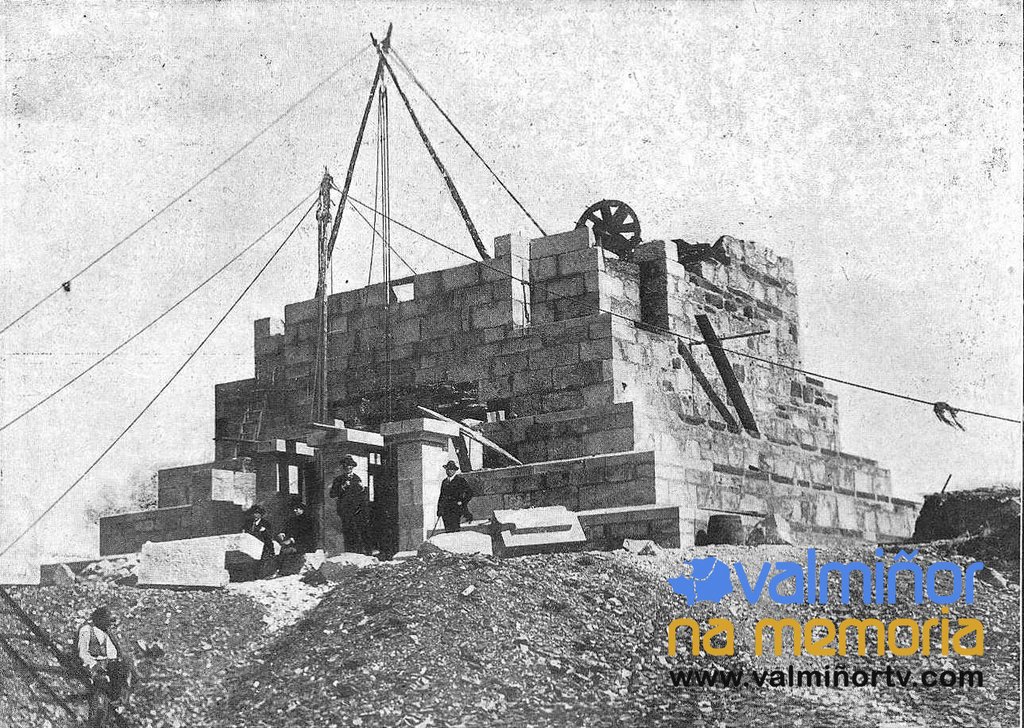 The aforementioned Vigo architect Manuel Gómez Román took over the projection of the monument. In number 87 of the Céltiga magazine it is indicated that Enrique Marín was the author of the sculpture of the Virgin of Mount Carmel and the Child Jesus. It refers to the sculptor Enrique Marín Higuero, also author of the five statues that crown the Banco Pastor building in Vigo, on Policarpo Sanz Street, a building that was also designed by Gómez Román.

The construction was not exempt from setbacks. According to González Martín, the monument “collapsed in full construction”. Mirambell offered to raise it at his expense, but he was not alone in financing the monument, as a popular subscription was made. According to Francisco Javier Torres Goberna, the Navy Ministers of the United Kingdom, the United States, Brazil, Italy and France also contributed, collecting 201,216 pesetas. In March 1925, La Gaceta de Madrid published a Royal Decree granting a subsidy of 37,930 pesetas to the Navy Monument Committee of Monteferro, “for the construction of the road that has to give easy access.”

The definitive inauguration took place in 1928 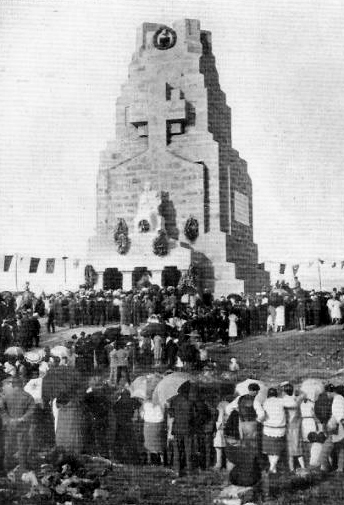 Once the monument was finished, on July 16, 1928, it was inaugurated by General Severiano Martínez Anido, then vice president of the Council of Ministers, who, as I have indicated, had already attended the laying of the first stone (next to these lines, a photo of the opening ceremony published by Vigopedia.com). The next day, the newspaper Abc gave notice of the act, noting that the general was received by the mayor of Vigo -position that then occupied Mauro Alonso Cuenca-, the commander of the Navy squad, Admiral Roji, the civil and military governors, the commander of Navy de Vigo and a large public, including children waving small Spanish flags. A company of the Infantry Regiment “Murcia”, which had its barracks in Vigo, paid tribute to the general.

After having lunch in Canido, General Martínez Anido traveled to Monteferro, where the bishop blessed the monument and Mirambell explained the work done. The general thanked the construction of the monument and gave it for inaugurated. The mayor of Vigo, Alonso, present at the event, asked for a reward for Mirambell for the work done, a request that the general promised to take into account. 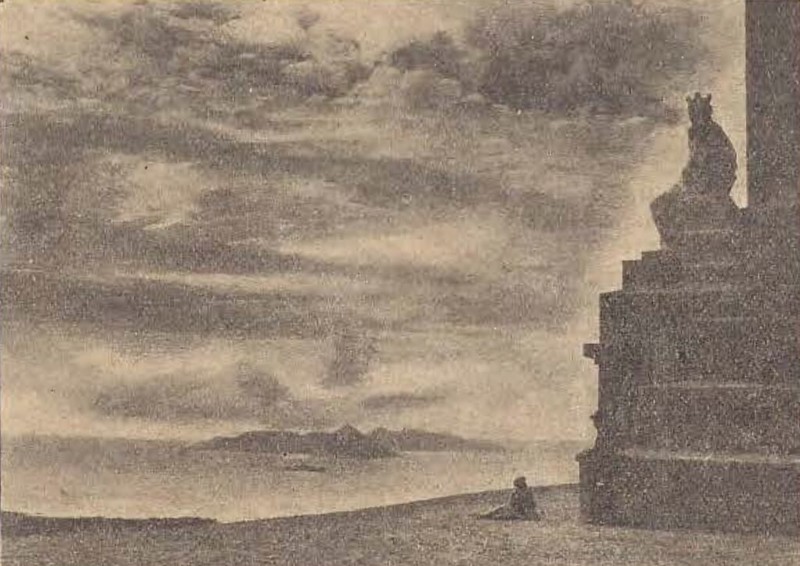 “The Beacon of the Dead”

It is necessary to say that then Monteferro was practically depopulated of trees, as it shows this photo published by Céltiga in the mentioned date. From that magazine, Ramón Fernández Mato, a Vigo journalist who had attended the inauguration of the monument, pointed out the following in reference to the World War I: “A silence of relief filled the world as soon as the fight was over. And that was when Vigo, son of the sea and proud of the sea, thought of raising this amputated tower to the memory of the dead that the ocean hid in its voracious depths.” The article thus commented on the curious aspect of the monument: “It emerges on the coast like a beacon, but the light does not flourish and gesticulates at its peak, because this beacon does not illuminate vital marine routes, but evokes the silent radas of the Hereafter.” For this same reason, Fernandez Mato described the monument as “The Beacon of the Dead” in the subtitle of his article, adding then some verses by Edgar Allan Poe, specifically from the poem “Spirits of the Dead”:

“Be silent in that solitude,
Which is not loneliness—for then
The spirits of the dead who stood “.

So are the elements that make up the monument

Certainly, the monument looks like a mixture of a pantheon and a lighthouse. Its interior is hollow, as if it were a chimney. 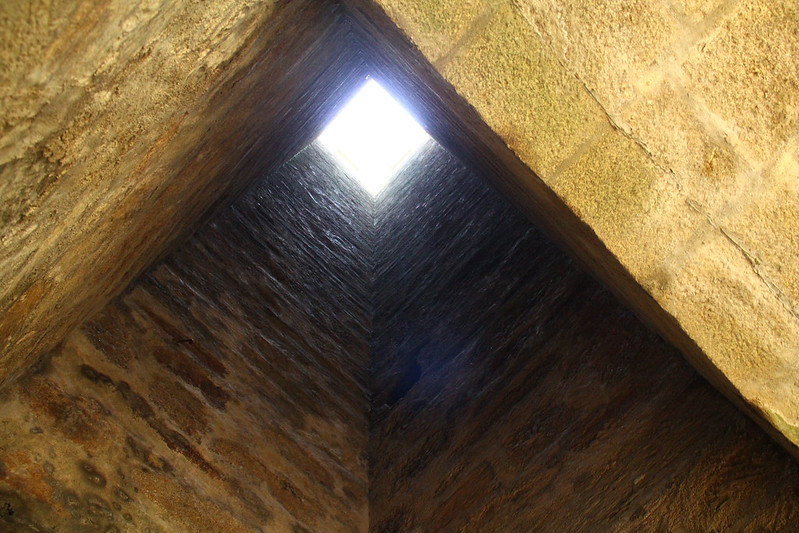 At the bottom of that “chimney” garbage accumulates, and there is a metal door thrown, that surely closed the access to the interior. 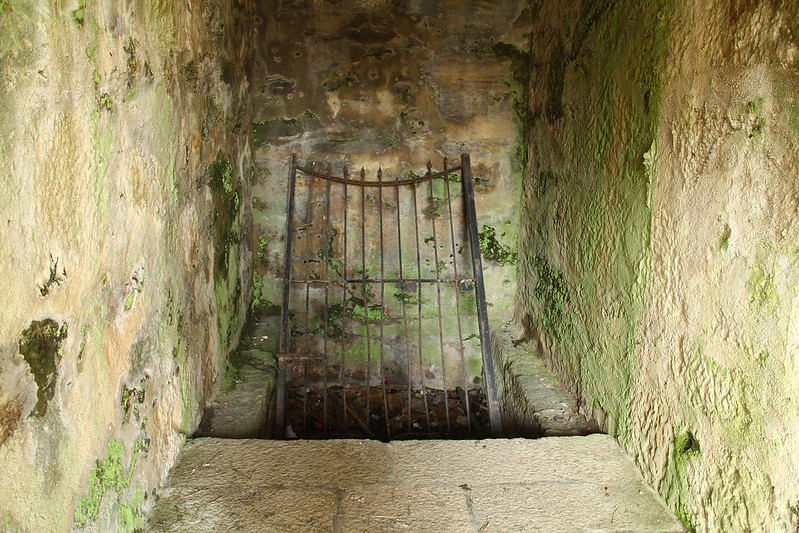 As I have pointed out, on the western side there is the statue of the Virgin of Mount Carmel -patron of the sailors- and the Child, looking towards the west. At his feet there is a Latin inscription that says “Salve Regina Marium” (Save Queen of the Seas). On the Virgin there is a cross. 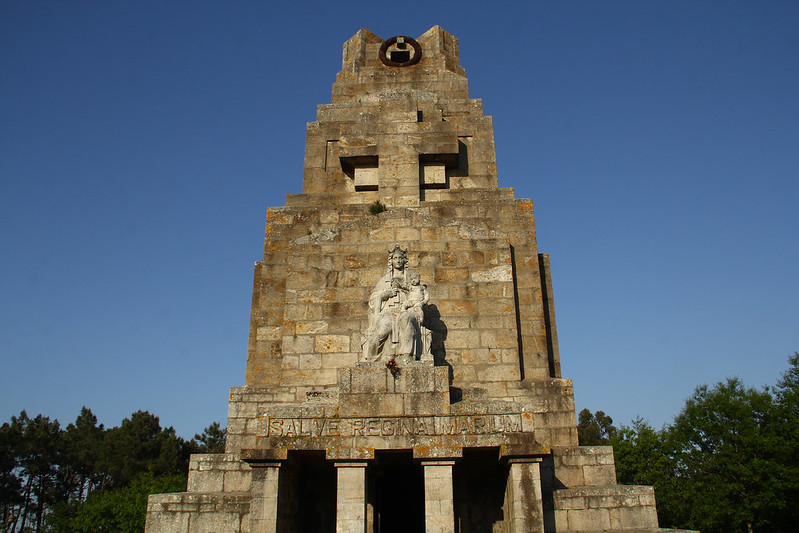 At the foot of the western side there are four square columns, which give way to the short gallery that leads to the interior of the monument. 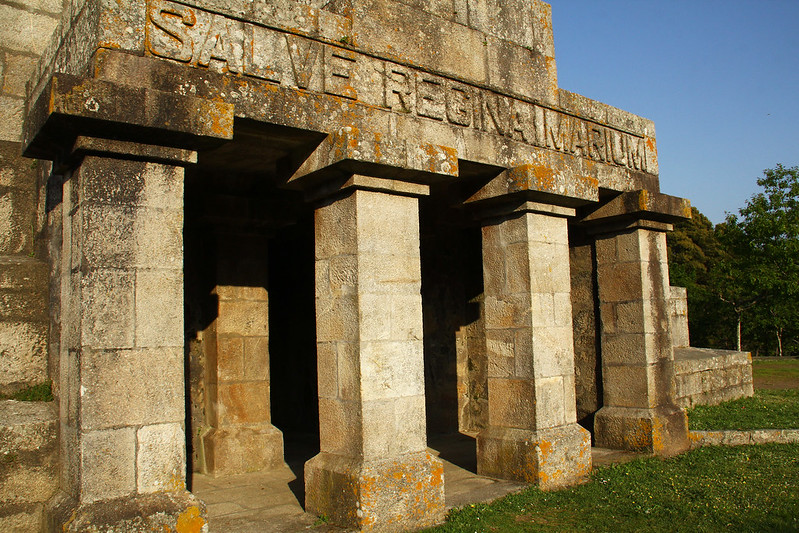 On the north face there is a white marble tablet that reads as follows:

“A prayer for the navigators who, in the struggle for existence, found their graves in the sea, for those who perished fighting for the honor of their Homeland or for the ideal. For many tragedies, in short, buried in the bottom of the Atlantic.” 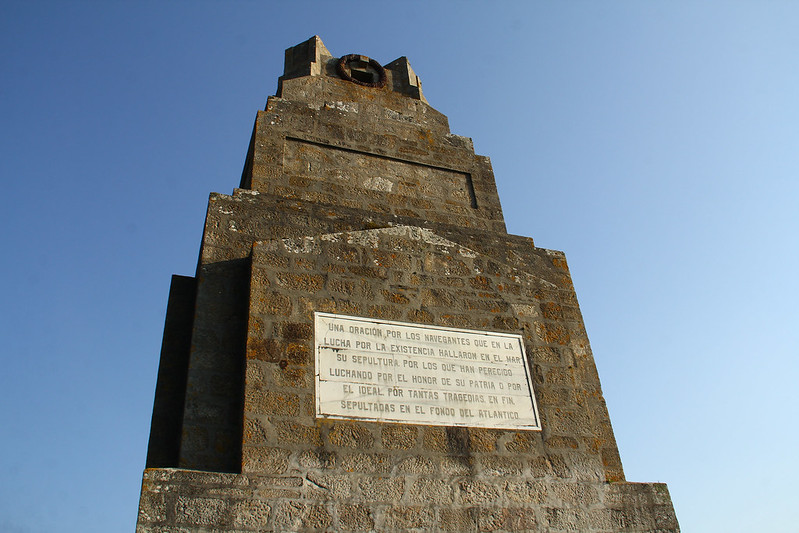 On the south face, another white marble tablet explains the purpose of the monument:

“This Monument was raised to the Universal Navy so that the navigators, upon seeing it, feel the emotion of being greeted by Spain. That from this granite emanate perpetually effluvia of love that comforts the lonely travelers of the splendid Atlantic plain.” 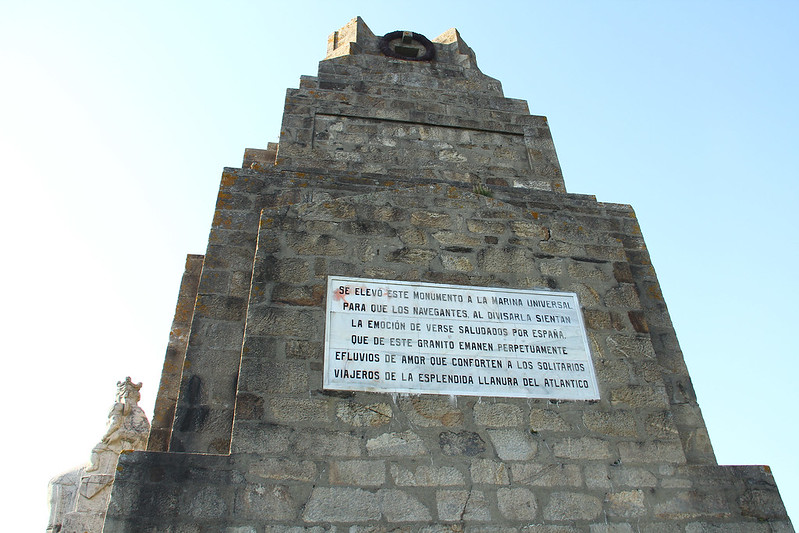 On the east face, another white marble tablet, narrower and longer, offers the details of the laying of the first stone:

This last tablet carries down, to the right, the signature of the “Marmolería ‘Sousa’ Vigo”. 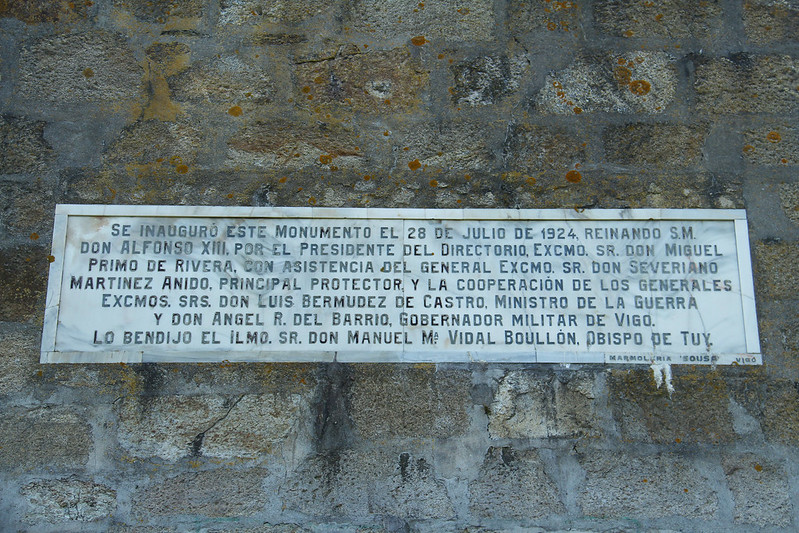 Today the environment of the monument is very wooded, so that the image of the Virgin is not visible from the sea. In the distance it is only possible to distinguish the upper part of the monument.

You can see here a series of photos that I recently made of this monument, uploaded to my Flickr account:

Finally, I indicate here the location of the monument in Google Maps: