The USSR and their satellites drowned in the opening in Czechoslovakia

The Ending of the Prague Spring of 1968: Communism Sent Tanks Against Freedom

The Prague Spring: a policy of openness without abandoning communism

Eight months earlier, on January 5, Alexander Dubček had been appointed general secretary of the Communist Party of Czechoslovakia (KSČ), taking power in that socialist dictatorship. The new president initiated an opening process called, in Czech, as “socialismus s lidskou tváří” (socialism of human face). Starting in April – the reason why the process ended up being known as the “Prague Spring” -, Dubček initiated a transformation of the communist regime, with a certain freedom of the press, a greater popular participation in political life, a limited opening to the private initiative in the economy and also an international policy of good relations with the western countries, but without breaking the ties with the communist bloc. There was even talk of calling democratic elections in the medium or long term. Part of the Czechoslovak population soon claimed more. Once the censorship was abolished, the press began to read criticism of communism and the USSR. The cultural world also experienced a certain opening. In this area he highlighted the figure of the playwright Václav Havel, who three years earlier had written a black comedy, “The Memorandum”, which parodied the iron communist bureaucracy. 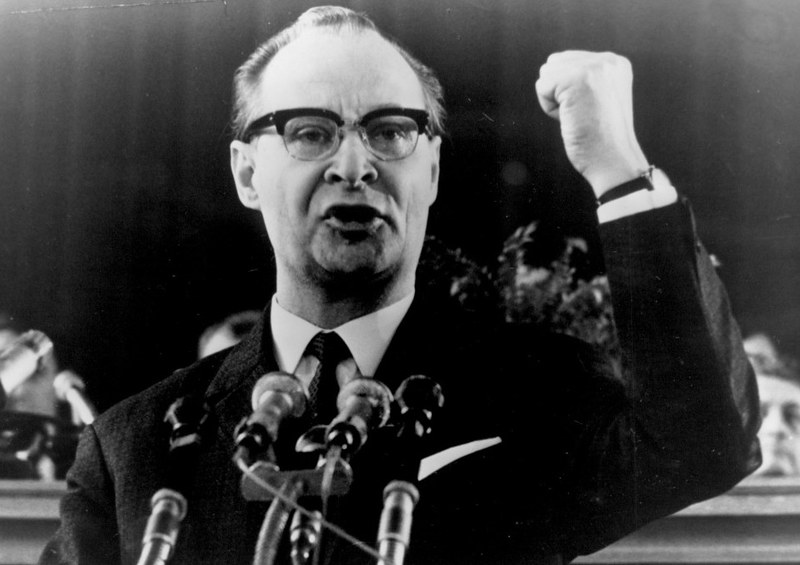 Alexander Dubček in March 1969. After his appointment as general secretary of the Communist Party of Czechoslovakia in January 1968, he initiated an opening policy that ended abruptly with the Soviet invasion of August of that year. He signed a few weeks earlier the Bratislava Declaration, which resulted in the death sentence of the Prague Spring.

Soviet anger and the Bratislava Declaration

The Soviets and their Warsaw Pact partners began to get uneasy. They knew that the road to freedom is necessarily a way out of communist oppression, and they could not allow it. Recall that in 1956 the USSR had already sent its tanks to crush the Hungarian Revolution, and in 1961 East Germany had become a huge prison, raising the famous Berlin Wall, built with the excuse of being a “wall of antifascist protection” but that in practice it was intended to prevent the flight of the subjects of the GDR in that city. But in addition, the 1,382 kilometers of border that separated the Federal Germany from the badly named Democratic Germany (that paradoxically, was the most undemocratic of the two) were covered with walls, barbed wire, fences, ditches and minefields and were patrolled by tens of thousands of soldiers of the GDR. During its existence, 140 people died trying to flee across this border into free Germany. A Soviet soldier chasing a young Czechoslovakian who threw stones at Soviet tanks during the invasion.

In July, the Czechoslovak government was summoned to a meeting with the Soviet government near the border between the two countries. The Czechoslovak delegation promised loyalty to its Warsaw Pact allies while defending its reforms, but promising to stop the anti-communist drift that was taking place in the process through greater control of the press. On August 3, the USSR and Czechoslovakia and other dictatorships of the Warsaw Pact (East Germany, Bulgaria, Hungary and Poland) signed a declaration in the Slovak city of Bratislava expressing their “loyalty to Marxism-Leninism”, the official doctrine of the Soviet Union since the time of Stalin. The statement contained a threatening prediction for the Czechoslovaks, as well as committing itself to “vigilance” against “anti-Communist forces”, the text noted that its signatories would never allow “nobody to separate a wedge between the socialist states or undermine the foundations of the socialist social system.“ Alexander Dubček himself signed this text, which was the death sentence of the Prague Spring. 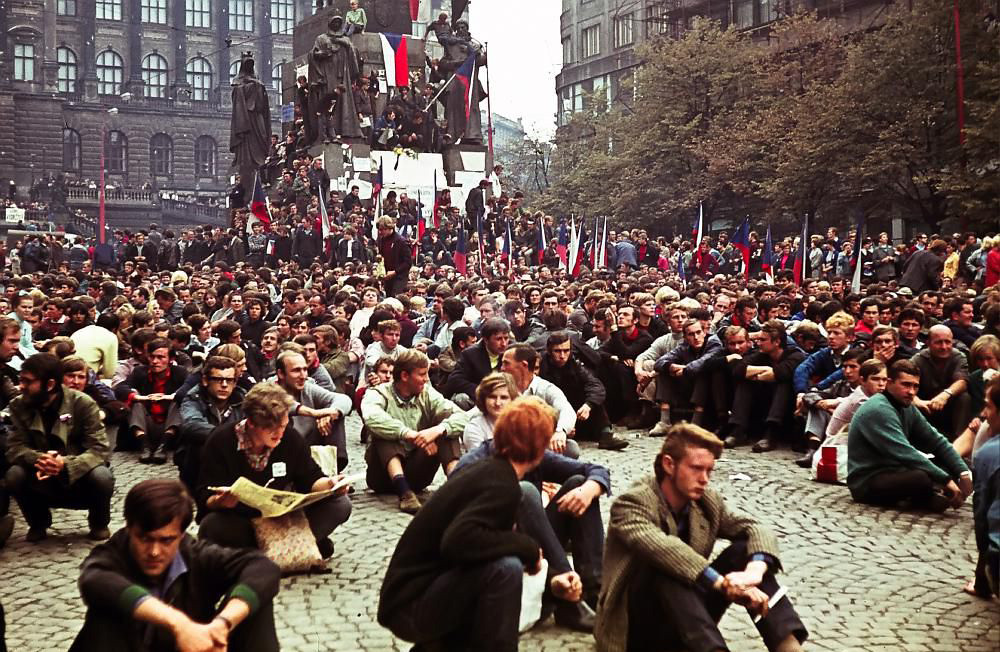 Demonstrators with Czechoslovakian flags sitting on the Wenceslas Square, next to the Wenceslas Monument in Prague, awaiting the arrival of the Soviets (Photo: Leszek Sawicki / Radio Praha)

Surprisingly, the Western countries did not lend any support to the Prague Spring. Partly, logically, because the communist regime continued to maintain its one-party system and its alignment with the Warsaw Pact. In addition, the president of the United States, Lyndon B. Johnson, was focused on the Vietnam War and did not want direct conflicts with the Soviets in their area of European influence. In 1963, the so-called “distension” policy had begun, following the serious Cuban missile crisis. A line of direct communication between the president of the USA and the dictator of the USSR (the popularly known as “red telephone”) was established. In addition, the United States, the USSR and the United Kingdom signed the first Treaty of non-proliferation of atomic weapons on July 1, 1968. Because of this policy, both the United States and NATO left the way free for the USSR and its partners to invade Czechoslovakia. 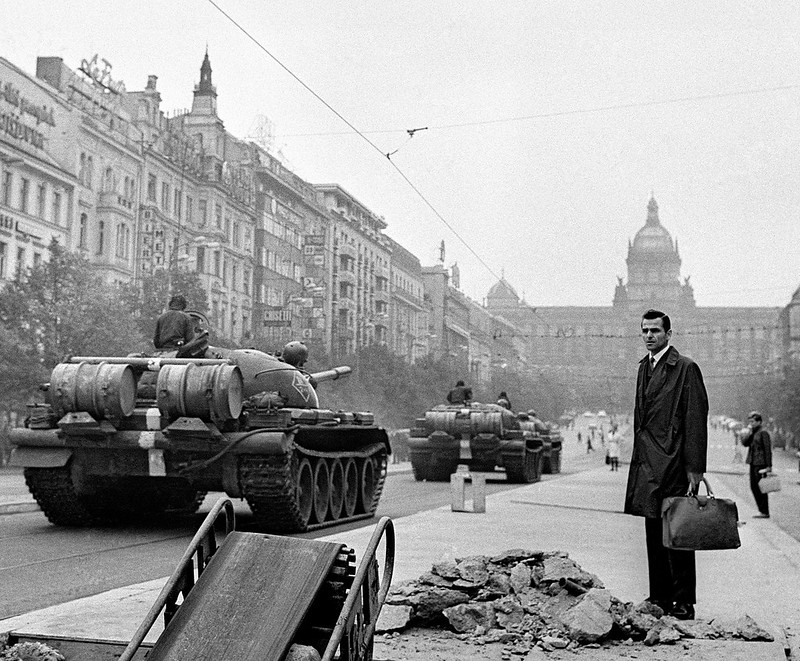 Prague citizens in the Wenceslas Square (Václavské náměstí), surprised by the arrival of the Soviet tanks in the Czechoslovak capital on the morning of August 21, 1968. At the end of the square is the imposing Prague National Museum, which it was riddled with Soviet tanks, believing it was the Parliament.

The beginning of the invasion and the cynical Soviet justification

On August 17, the Soviet regime issued a resolution promising to “provide aid to the Communist Party and the people of Czechoslovakia through a military force,” an aid that neither the Government nor the Czechoslovak people had requested. The Soviet dictator, Leonid Brezhnev, announced on the 18th to his Warsaw Pact partners that the military operations would start on August 20 at night. As announced, the invasion began on the night of August 20-21. As I pointed out at the beginning, the USSR and its allies mobilized a force the size necessary to face a war. East Germany withdrew from the invading force at the last minute, after being warned by Czechoslovakian communists related to Moscow that the invasion of their country by German soldiers would enrage the resistance of the Czechoslovak population, who still had very present the occupation of their country for Germany 30 years earlier. 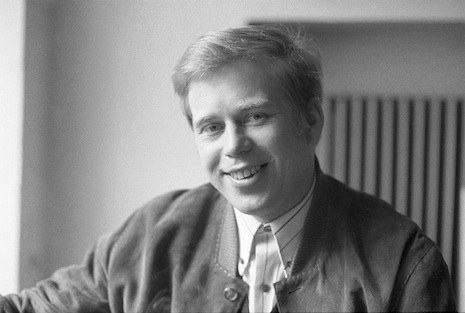 Václav Havel in a photo taken in March 1968. This Czech playwright became the voice of resistance against the invasion with his radio transmissions from the city of Liberec, in the north of the country.

Václav Havel: the voice of resistance from Liberec

On August 21, Václav Havel began a series of radio broadcasts from a station in the city of Liberec, in the north of the country. In the first issue he pronounced these words: “The foreign military units entered Czechoslovakia in immense numbers, without the knowledge of the government. They are occupying our towns and cities, our public institutions, our homes, our streets and highways; they are shooting at the civilian population, and there have even been instances of looting. In Prague they are arresting our leading politicians who, until yesterday, were in charge of the country”. Likewise, Havel added: “Every voice in support of Czechoslovakia today is important. People are walking through the streets with transistors radios glued to their ears. Broadcasts from free transmitters that are still functioning can be heard in public squares and from loud speakers in the streets. We are hungry for news of any expression of support that comes from anywhere in the world. Every such expression strengthens us, and we are grateful for each one.” In this way, Havel’s voice became a means to encourage the Czechoslovaks to the resistance. 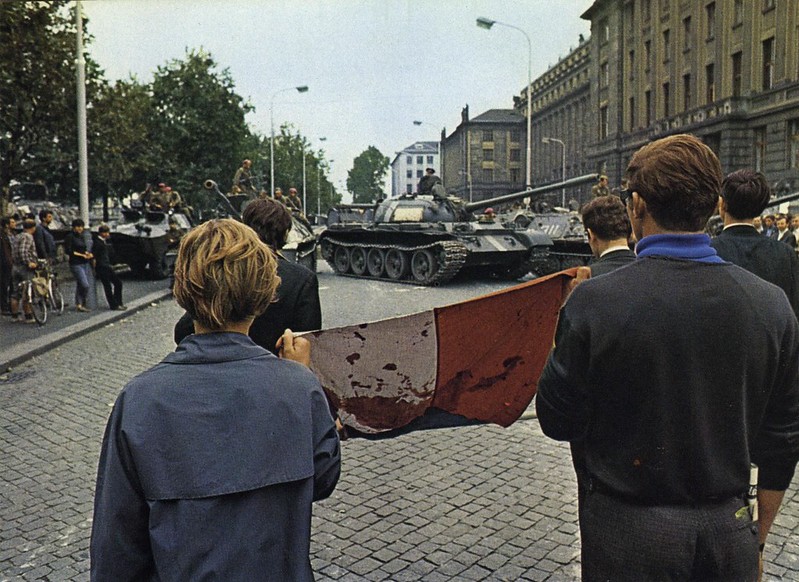 Demonstrators with a Czechoslovak flag full of blood, before the tanks and armored that tried to reach the headquarters of Radio Prague.

A bloody invasion with more than a hundred dead

It was a bloody invasion: although Alexander Dubček called his people not to resist the invaders, and although most of the signs of rejection of the invasion were non-violent, 137 Czechoslovaks were killed and several hundred were wounded in dealing with the Soviets. Young and old came to stand up to the tanks, some with words and others with stones. Some tanks were burned down. Dubček was arrested the same night of the invasion and taken to Moscow. He was allowed to return to Prague on August 27, and remained in office until April 1969. After the Soviet repression of the First of Prague censorship was re-imposed, the works of Václav Havel were vetoed and he was forbade to leave the country, being imprisoned several times for his activity in defense of freedom. Tens of thousands of Czechoslovaks fled the country to the West. 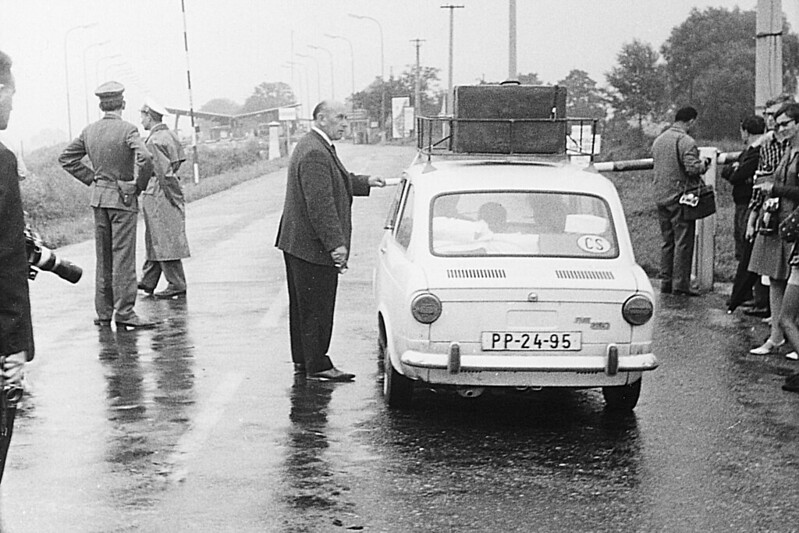 A Czechoslovak family passing the border on their Fiat 850 in the direction of Berg, Austria, after the Soviet invasion of their country. Tens of thousands of Czechoslovakians fled to Western countries.

In spite of the repression that existed in those communist dictatorships, there were small protests against the invasion of Czechoslovakia in the streets of East Germany, Poland and the USSR. The biggest street protests were recorded in Finland, a neighboring country of the USSR. In the diplomatic arena, protests and condemnations were issued by the United States, the United Kingdom, West Germany, France, Italy, Canada, Denmark, Greece, the Netherlands, Belgium … Even communist China protested, calling the USSR “fascist”. However, the Chinese Communist regime itself would send its tanks to suppress the protests of Tiananmen Square in June 1989, causing hundreds of deaths and thousands of wounded. 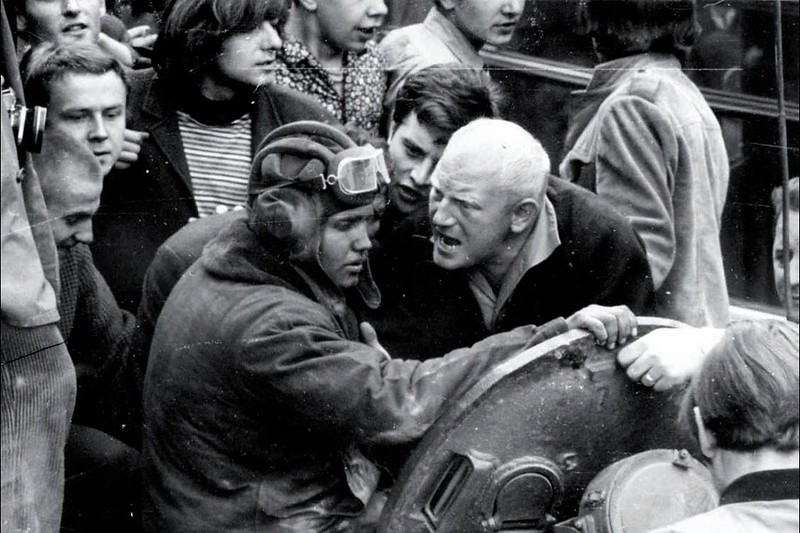 The reaction of the communist parties

One of the deepest international consequences of the invasion was a split between the left parties. The communist parties of Italy, France and even Spain (which had supported the German-Soviet invasion of Poland in 1939) rejected the invasion. The Communist parties of Finland and Greece were fractured by the division between supporters and opponents. The only Western Communist Parties that openly supported the invasion were those of the United States and Portugal (the latter still maintains openly Stalinist approaches today). 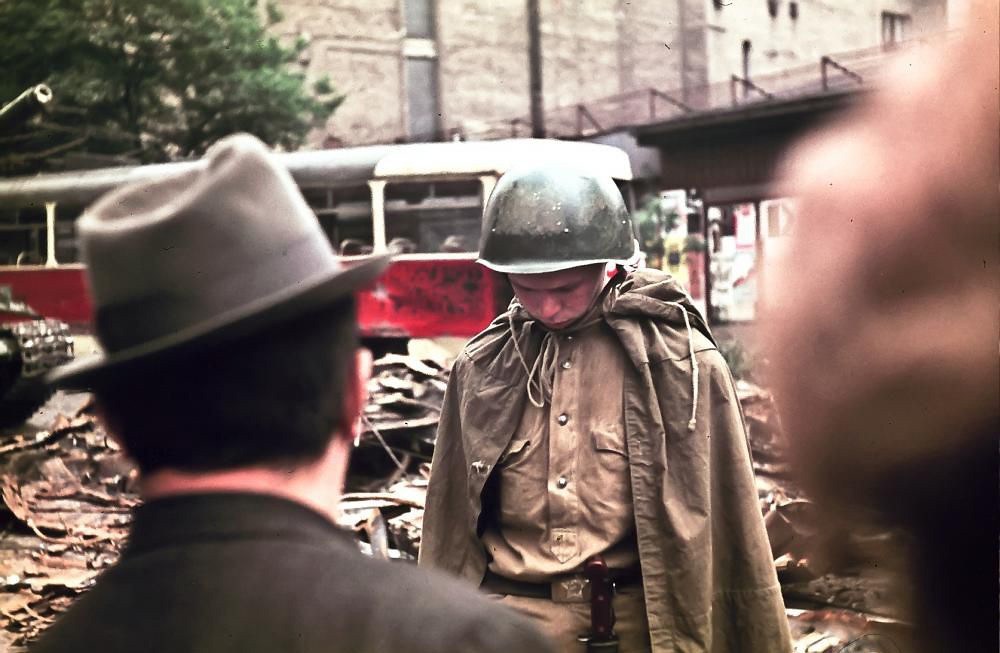 Among the critics of the invasion emerged a current, called Eurocommunism, with which apparently distanced themselves from the USSR, although in practice they remained loyal to Moscow: even today the Communist Party of Spain continues to defend the USSR, despite of his disappearance 27 years ago. Eurocommunism did not deceive the western electorate, who continued to identify these parties with communist dictatorships, and these formations have ended up being marginal in their respective countries, lasting only thanks to electoral covers that disguise their communist status (Izquierda Unida and Podemos Spain, the Partito Democratico della Sinistra in Italy and Syriza in Greece). 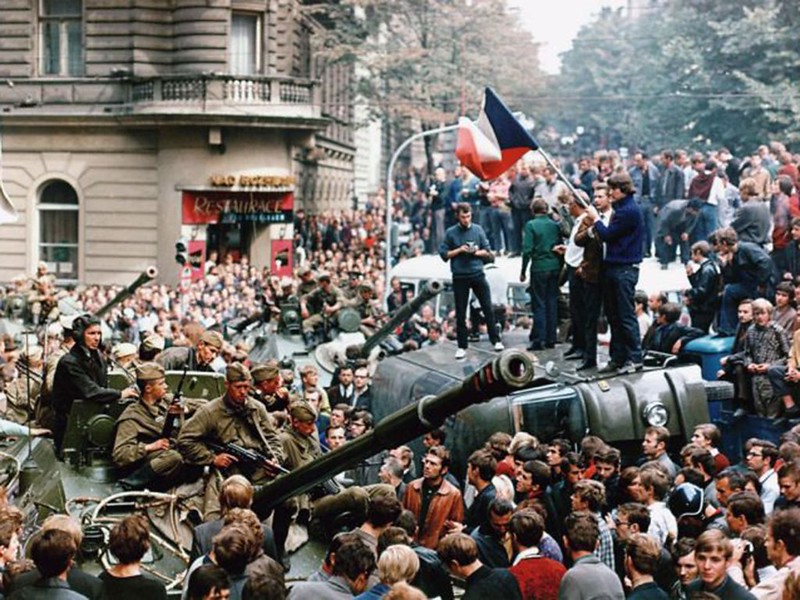 Soviet troops and armored vehicles trying to get to the headquarters of Radio Prague, in the midst of a crowd of citizens who came to demonstrate against the invasion.

The Czechoslovaks had to wait 21 years to have democracy and freedom, with the fall of communism, with the so-called Velvet Revolution. On December 29, 1989 Václav Havel became the first president of the new democratic Czechoslovakia. Today Slovakia and the Czech Republic, separated in 1993, are part of the Visegrad Group together with Hungary and Poland: it is the group most firmly opposed to communism – totalitarian ideology that they had to endure for decades – between the member countries of the Union European. Serve this post as a tribute to the Czechoslovaks who faced the communist invasion and those who died because of it. 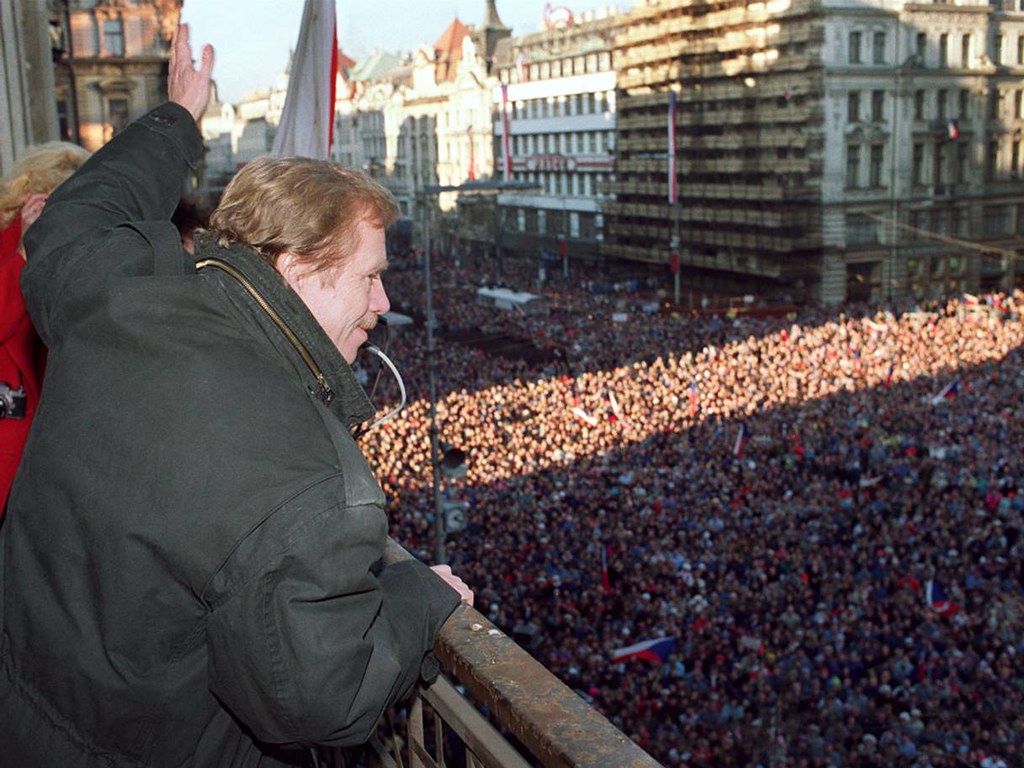 Václav Havel during the Velvet Revolution in 1989, which achieved the fall of communism in Czechoslovakia.

(Main photo: Citizens of Prague with a Czechoslovakian flag stained with blood in the Wenceslas Square, watching Soviet tanks pass by at the beginning of the invasion.)