In September 2015 I spoke here about the equidistance and pacifism adopted by the Communist Party of France (PCF) about the German invasion of Poland, by direct order of Moscow.

On August 23, 1939, Hitler and Stalin's foreign ministers signed the Ribbentrop-Molotov Pact, a non-aggression agreement between Germany and the USSR, which included a secret protocol by which both powers were distributing Poland, the Baltic Republics and Finland, a protocol discovered by the Allies in 1945 and which the Soviet Union denied until 1989. The Communist International, controlled by Stalin and based in Moscow, ordered the communist parties to sabotage the war effort against the Germans. This sabotage resulted, in particular, in propaganda actions by the Communists to promote defeatism and justify the invasion of Poland. On September 9, 1939, Georgi Dimitrov, general secretary of the Communist International, addressed a telegram to the PCF leadership stating: "The world proletariat must not defend the fascist Poland." It was eight days before Soviet troops penetrated the East frontier of Poland, so that this slogan referred to the German invasion. In response to the reaction of the governments of France and the United Kingdom declaring war on Germany, Dimitrov said: "The strategy of Communist parties in all warring lands at this stage of the war is to oppose the war, to expose its imperialist character; where Communist deputies are available, to vote against war credits, to explain to the masses that the war will not bring them anything but adversity and ruin." Communist propaganda actions focused on directing most of their criticism against the British and French governments as if they were the real culprits of war.

The Communist Party of Spain directed its propaganda against Poland

The Communist Party of Spain (PCE), like the others, followed these slogans of Moscow to the letter. It did so from the newspaper "España Popular", edited from Mexico and that served like spokesman of the PCE during the contest. The first number (can be downloaded here) was released on February 18, 1940. On the front page it included an article by Dolores Ibárruri, "La Pasionaria", a member of the PCE exile in the USSR, dismissing the war as "imperialist war" and blaming "France and England" for the Republican defeat in the Spanish Civil War the previous year. But the leader of the PCE went further. In the final part of that article, on page 6 of the paper, Ibrruri wrote: "The social-democratic spokesmen of English and French imperialism repeat every day that they wage war to "restore Poland"in the name of democracy and the people." And a little further down, he added: "They claim to help (although we know how much this aid is worth today) to Poland, where millions of Ukrainians, Belorussians and Jews did not even have the right to speak their language freely, In terms of outcasts." These Ibárruri words are a clear justification for the invasion of Poland. It is a paradox that invoked the Jews to justify a invasion that would lead to a genocide against that people. 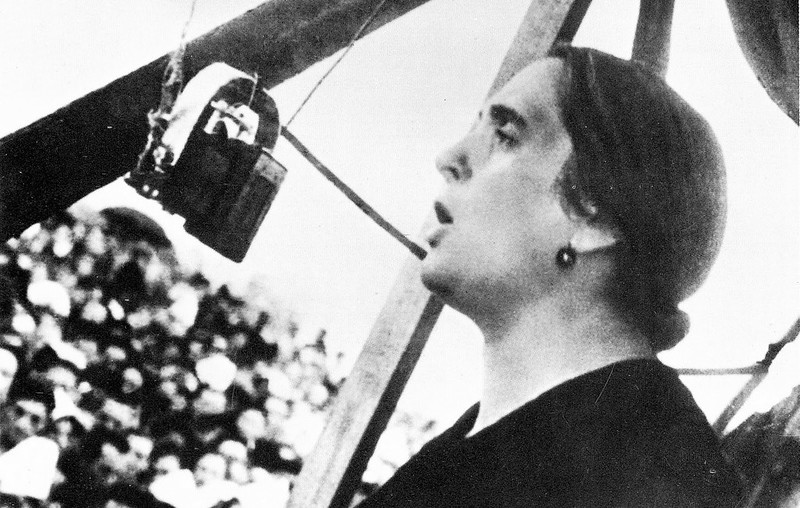 The lies of Ibárruri to discredit the Poles

The communist leader insisted, a paragraph below, on his justification of the Nazi-Soviet invasion and his criticisms of British and French: "They declare solidarity with the rulers of reactionary Poland, vanished without honor and without glory, because Polish landowners, the bribable colonels, who formed their government and who did not represent the will of the Polish people -who had no voice or vote to decide their fates- represented, nevertheless, the interests of the bankers and great capitalists of London and Paris." Ibárruri was lying: Poland was a democracy and the Polish people admirably resisted the German invasion. What was to be a military trip led to a more complicated operation and it took more than a month to finish. Even before the invasion, the Poles began to organize resistance movements. In fact, the largest resistance movement of the Polish contest was, Armia Krajowa, who was loyal to the Polish government in exile, the legitimate government of Poland. 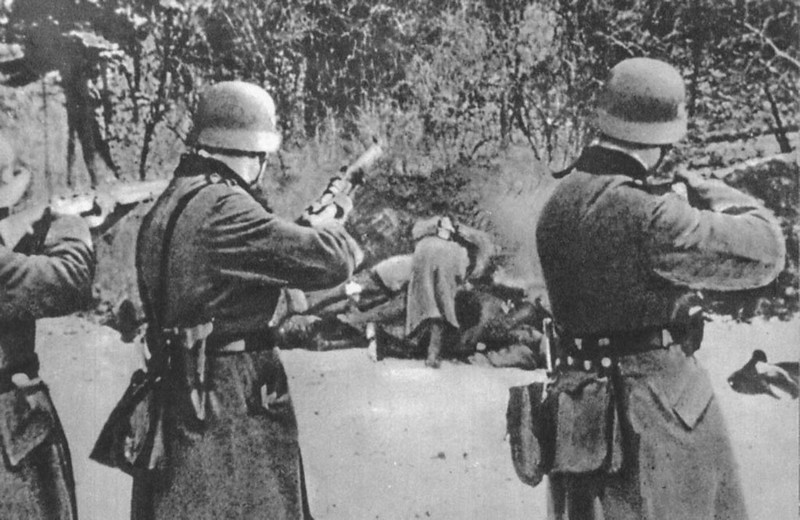 Justifying the revenge of Stalin against Poland

Of course, with his justification of the invasion of Poland, Ibrruri was not thinking particularly of the German offensive, but of the soviet offensive. In its article, the Communist leader endorsed the historical Soviet invasion of Poland, which in 1920 had restrained the Bolshevik invasion of Central Europe at the Battle of Warsaw. Stalin remembered these facts well, and Dolores Ibárruri expressed the desire for revenge of the USSR without bluntness: "The desire to reestablish that sanitary cordon again, that base for military attacks against the country of Socialism, which was the role played by Poland, an State artificially created and that was a heterogeneous conglomerate created by the Treaty of Versailles: Poland should serve no other purpose." Once again the Spanish communist leader demonstrated his ignorance or bad faith: Poland appeared as a kingdom in the tenth century, And was one of the great European powers in the sixteenth and seventeenth centuries. In 1683 it was the Polish cavalry of Jan III Sobieski -the famous winged hussars- who saved Vienna and stopped the Turkish expansionism in Europe, a battle that deserves to be equated with the naval victory of Lepanto in 1571. In addition, it is a paradox that Ibárruri, a defender of a state as heterogeneous as the USSR, criticized Poland for its heterogeneity. As has so often happened, communist propaganda failed in terms of logic. 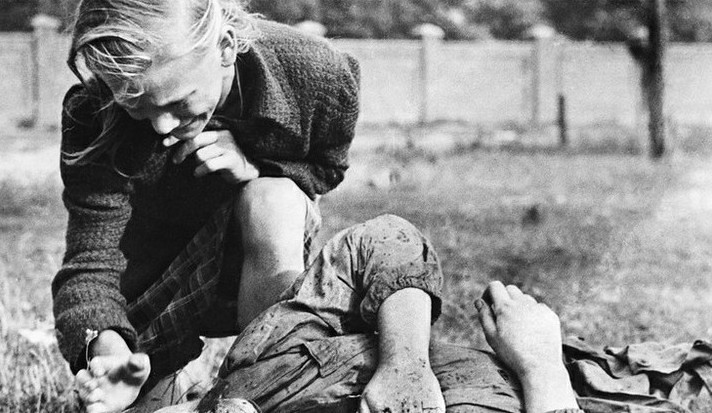 Kazimiera Mika, a ten-year-old Polish girl, cries before her sister's corpse, killed by the Germans while picking potatoes in a field outside Warsaw, in September 1939

Finally, Ibárruri launched a radical anti-Polish remark: "Poland yesterday, prison of peoples, Republic of concentration camps, traitorous rulers of its people, which was constituted in the image of democracy of the Blum and Citrine! Social-Democracy weeps over the loss of Poland, because imperialism has lost a foothold against the Soviet Union, against the homeland of the proletariat. Cry for the loss of Poland, because the Ukrainians, Belarussians, thirteen million human beings, have conquered their freedom." I wonder what the Spanish communists have to say today in the face of these infamous statements made while the Nazis massacred the Polish people. It is grotesque to read Ibárruri to call Poland "Republic of concentration camps" from the capital of the Gulag Republic, a communist state that deported and sent entire masses to concentration camps for political, religious and even ethnic reasons. As a Spaniard and as a Democrat, I can only express my disgust at the servile attitude of the PCE, which merely repeated like a parrot the slogans dictated by Stalin. I want to end these lines with a tribute to the millions of Poles who fought for their freedom while Ibárruri justified the Nazis who were invading them: 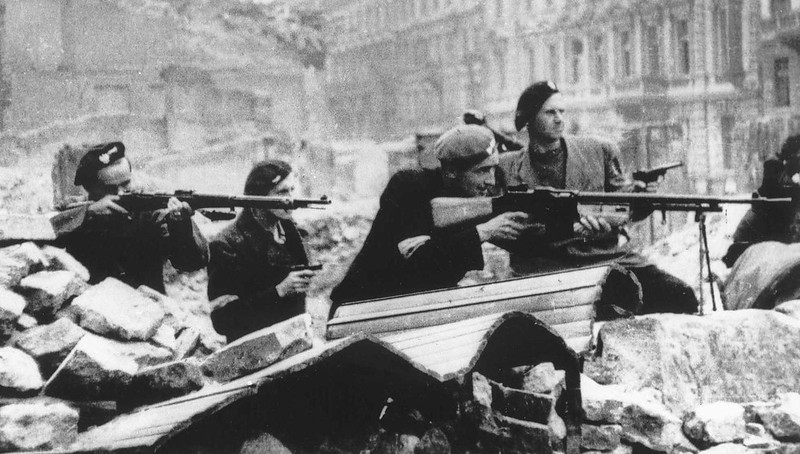 Soldiers of the Polish Resistance at the Warsaw Uprising of 1944