Nine of those ten national flags belong to European countries.

Flags are elements that have been used since Antiquity as a method of identification and since the High Middle Ages as national emblems.

There are flags so old that it is difficult to determine their origin. However, we could say that these are the ten oldest national flags in the world that are still in use (I exclude those of England, from the 13th century, and Scotland, from the 14th century, as they are not independent countries and become part of the United Kingdom). Significantly, nine of the ten oldest national flags are from European countries. 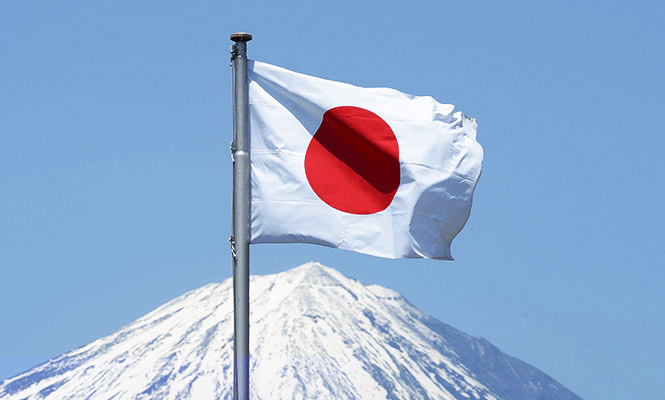 Japanese flag with Mount Fuji in the background (Photo: Kinashi-san.com).

The Flag of Japan, known there as "Hinomaru", is so old that its origins are very uncertain. The oldest documents place the use of the rising sun as the flag of the Japanese Empire in the year 701. However, the white flag with the red circle was officially adopted on February 27, 1870. 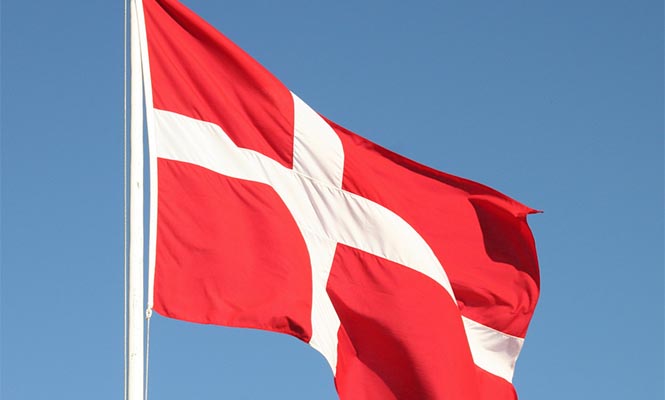 The "Dannebrog" is considered by many to be the oldest national flag in the world (Photo: Pxhere.com).

The Flag of Denmark, known as "Dannebrog" in that country, has its origin according to legend in the Battle of Lindanise in 1219. However, it was made official as the national flag in 1625 and its proportions were fixed in 1748. It was the first flag with the Scandinavian Cross, so it could be said that other later national flags such as those of Sweden, Norway, Finland, Iceland and the Faroe Islands, among others, derive from its design. The Guinness Book of Records considers it the flag oldest national flag still in use. It is a condition that is also granted by many sources, due to the difficulty of establishing the origin of the Japanese Flag. 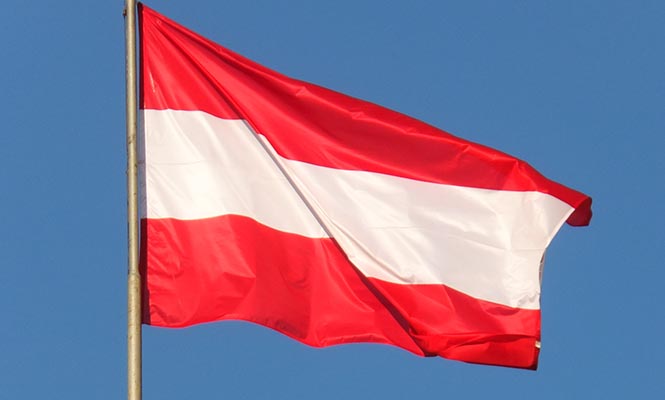 The Flag of Austria, or "Flagge Österreichs" (in German), has been documented since 1230 and derives from the heraldic shield of the Babenberg dynasty, which ruled Austria from the 10th to the 13th century, succeeded by the Habsburg dynasty. It is the oldest horizontal striped flag in Europe, and its heraldic version has appeared on the coats of arms of the Kings of Spain since Carlos I until Alfonso XIII. 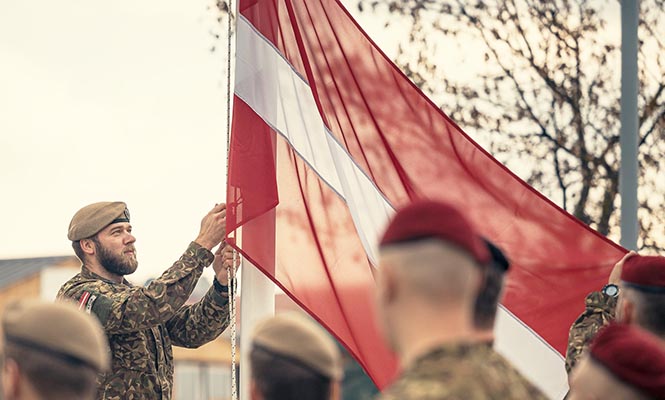 The Flag of Latvia, or "Latvijas Karogs" (in Latvian), is one of my favorite flags because of its peculiar design. It is documented for the first time in a medieval work, the "Livländische Reimchronik", in which it is described during a battle that took place in 1279, in which the Latvian tribes of Cēsis carried a red flag with a white stripe. It was officially adopted in 1921 after the country's independence from the Russian Empire, and made official again when Latvia separated from the USSR in 1990. The Latvian Flag is the only one in the world that includes the maroon color, although in Latvia call it "Latvian red". Unlike the Spanish Flag, in which the red stripes are half as thick as the yellow stripe, in the Latvian Flag the red stripes are twice as thick as the central white stripe. 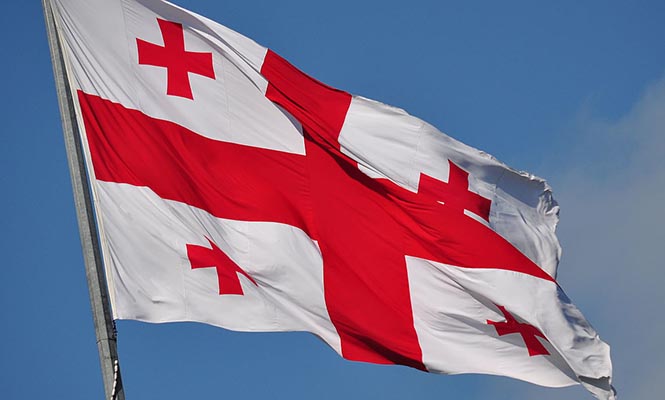 A Georgian flag waving in the city of Batumi (Photo: Frank Miller).

The Flag of the Republic of Georgia, or "Sakartvelos Sakhelmtsipo Drosha" (in Georgian), is documented at a Map by Domenico and Francesco Pizzigano from 1367 preserved in the Palatine Library in Parma, showing a red Jerusalem Cross on a soft background waving over the city of Tbilisi. Supposedly that standard, possibly with its origin in the Crusades, would have become the flag of the Kingdom of Georgia during the reign of George V (1299-1302 and 1314-1346). The Republic of Georgia regained it and officially adopted it on January 14, 2004. 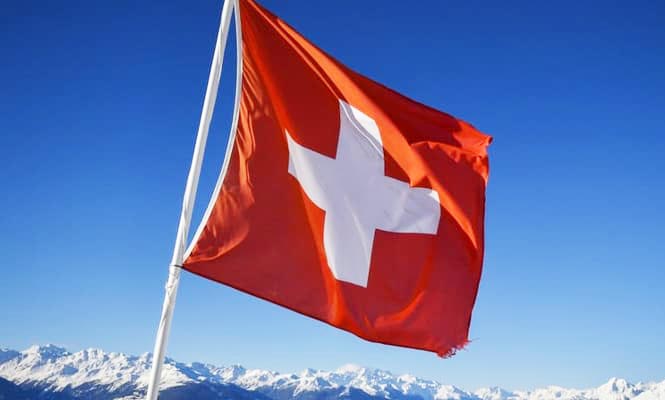 A Swiss Flag with the Alps in the background (Photo: Thelocal.ch).

The Flag of the Swiss Confederation is historically linked to one of the traditions of the Swiss people: the military. Its soldiers were among the best in Europe and used to work as mercenaries for various armies, including that of the Holy Roman Empire, whose war flag, the "Reichssturmfahne", also known as the Saint George Flag, bore a white cross on a red background. Everything seems to indicate that the Holy Empire granted the use of its white cross to the troops of the Swiss canton of Schwyz, whose standard until 1475 was entirely red.

The use of the white cross eventually spread to all of Switzerland, using that emblem for the first time on a red flag as a representation of the Confederation in 1422, during the Battle of Arbedo. The current Flag of Switzerland was officially adopted in 1841, and as a curiosity, it is the only square national flag in Europe, next to that of the Vatican, a characteristic that is possibly due to its use as a military emblem hundreds of years ago (in the Modern Age, military flags were square). 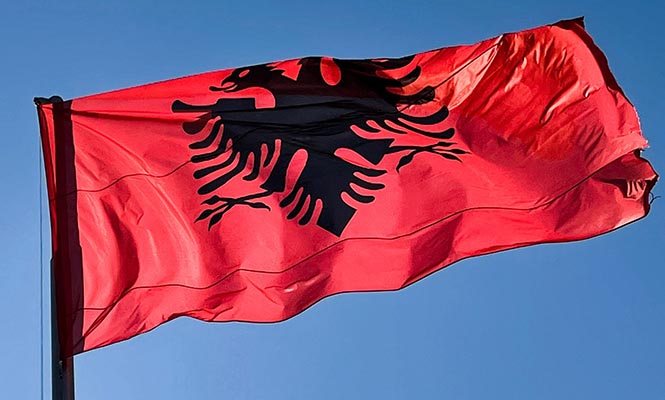 The Flag of Albania, a black double-headed eagle on a red background (Photo: Eric B.).

The Flag of Albania, or "Flamuri Kombëtar" (in Albanian), dates to the time of Gjergj Kastrioti "Skanderbeg" (1405-1468), an Albanian feudal lord who led a rebellion against the Empire Ottoman between 1443 and 1468, adopted the traditional symbol of the Byzantine Empire, which was a double-headed eagle, on a red flag. Albania got that flag back in 1912 when it seceded from the Ottoman Empire. In 1946, the communist dictatorship added a red star with a yellow border above the eagle. The star was removed in 1992, after the fall of communism. 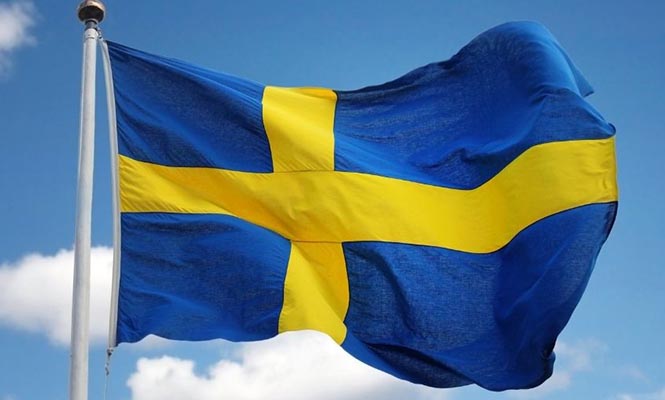 The Swedish Flag, or "Sveriges Flagga" (in Swedish), is documented since the 16th century, being made official on April 19, 1562, which makes it one of the oldest legally established. In 1663 the use of the flag with three tails was also regulated, as a naval and state flag. 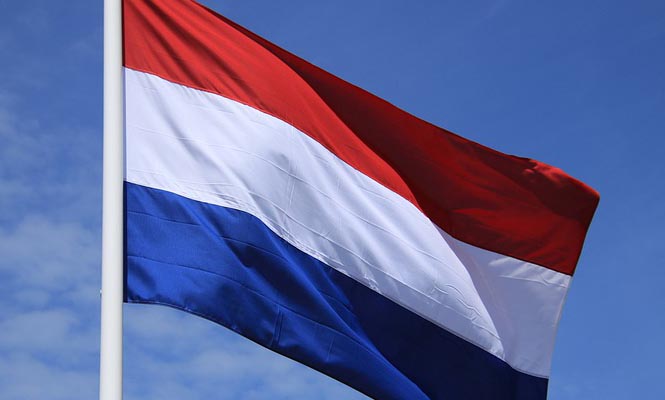 The tricolor flag of the Netherlands (Photo: Amsterdamfox.com).

The current Dutch flag has its origins in the "Prinsenvlag", the tricolor flag made up of three bars (orange, white and blue) adopted by the United Provinces of the Netherlands after its independence from Spain in 1581 Due to the problems that orange caused in the sea (we could say that it is one of the most misunderstood colors), it ended up changing the orange stripe to a red one in 1630, although the change was occurring gradually prior to that date. The current flag was regulated in 1937. As a curiosity, the old "Prinsenvlag" was declared the flag of South Africa in 1928, due to the presence of settlers of Dutch origin in that country. 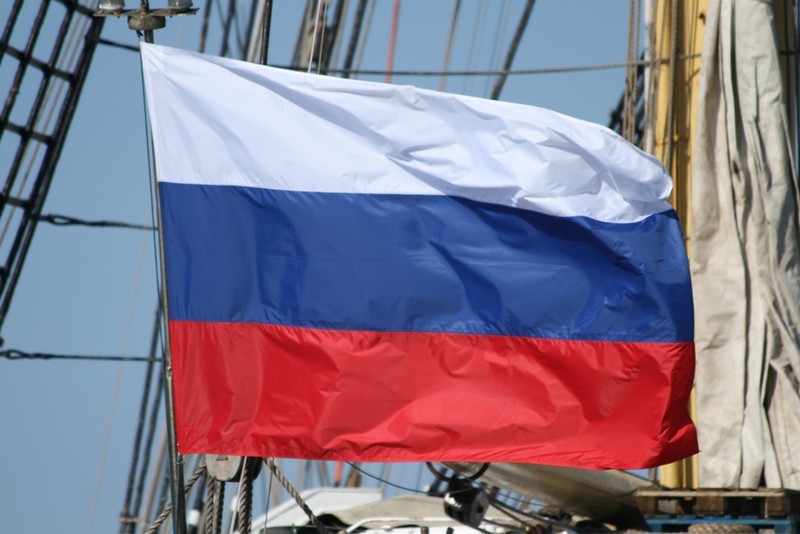 A Russian Flag waving on the "Kruzenshtern", the training ship of the Russian Navy, during its visit to the port of Vigo, Spain, on the occasion of the 2009 Tall Ships Race (Photo: Elentir).

The current flag of the Russian Federation was used for the first time as the merchant flag of the Russian Empire in 1696. This flag inspired 19th-century Pan-Slavism to design the flags of other Slavic countries, which is why which white, blue and red are common colors of many Central and Eastern European countries. Curiously, the Russian Empire ended up adopting a different flag in 1858, made up of three stripes (black, yellow and white) and used today by some Russian nationalist groups. The use of the white, blue and red tricolor flag was not authorized on the mainland until 1883, and finally became the national flag in 1896 after the coronation of Tsar Nicholas II. The Soviet dictatorship replaced the tricolor flag with the communist red flag. After the disappearance of the USSR in 1991, the Russian Federation recovered the tricolor flag, which was made official by Boris Yeltsin in 1993.