The military salute is one of the most common elements of the military trade throughout the world. Beyond being a mere ceremonial gesture, today it constitutes a symbol of respect and unity.

The origin of the military salute

The origin of the military salute is uncertain. A possible explanation has its origin in the Middle Ages, when the knights carried metal helmets that covered the face with a folding visor. Some believe that the gesture of bringing the tip of the fingers to the temple evokes the movement that the knights made when raising the visor of their helmets before the combat, as a gesture of respect and greeting towards the enemy. The drawback of this explanation is that if the military salute had a medieval origin, it would have been used to a greater or lesser extent for centuries, but the reality is that it is a rather recent salute, which extended into the Contemporary Age.

Another explanation, more likely, points out that centuries ago there was a habit of saluting a superior by raising his hat. In the eighteenth century the ordinances of the British Army suppressed the obligation to uncover the head to greet a superior. Instead, the custom of grabbing the end of the hat was established as if one were to remove the hat, a gesture that would have given rise to the military salute we know today. Perhaps that explains a detail: as a general rule, in almost all armies, soldiers are exempt from military salutes if they do not wear any headgear.

Currently, and with a few exceptions that I will point out below, in the world military salutes are divided into two main types: with the palm down and with the palm forward. The salute with the palm down consists of raising the arm leaving it at right angles to the body, then stretching the forearm toward the right temple, with the hand extended and the palm of the hand facing the ground. This salute is the one used in the armed forces of the USA, Russia, China, Spain, Portugal, Italy, Germany, Austria, Belgium, the Netherlands, Ireland, Turkey and practically all the countries of Central and Eastern Europe and in all the countries of Central and South America, and also in the naval forces of the United Kingdom and the Commonwealth: Australia, Canada, New Zealand, India, Pakistan and others (Photo: Spanish Air Force).

The other most usual military salute is with the palm in front. The procedure is the same as with the palm down, with the difference that in this case the palm of the hand is left facing the front and perpendicular to the ground. This military salute is used in France (where it is called “raquette”) and in many of its former colonies, as well as in the armies and air forces of the United Kingdom and the Commonwealth countries (Photo: Australian Army). 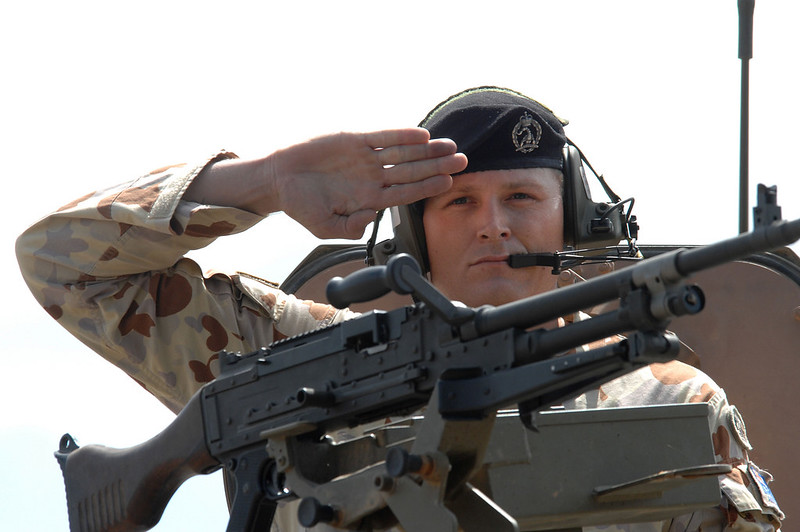 The origin of the different salutes in the British armed forces

As you will have noticed, in the United Kingdom and in the Commonwealth countries the two salutes are used: with the palm down in the case of the naval forces, and with the palm in front in the rest of the military branches. What is this about? There is an anecdote that could explain it: on one occasion Queen Victoria visited a warship and a sailor greeted her with his palm in front, his hand rather dirty. The Queen had then decreed that the crew salute with the palm down, because by the work of the ships, it was more frequent that the sailors had their dirty hands and it was bad to salute like that (Photo: British Ministry of Defense). 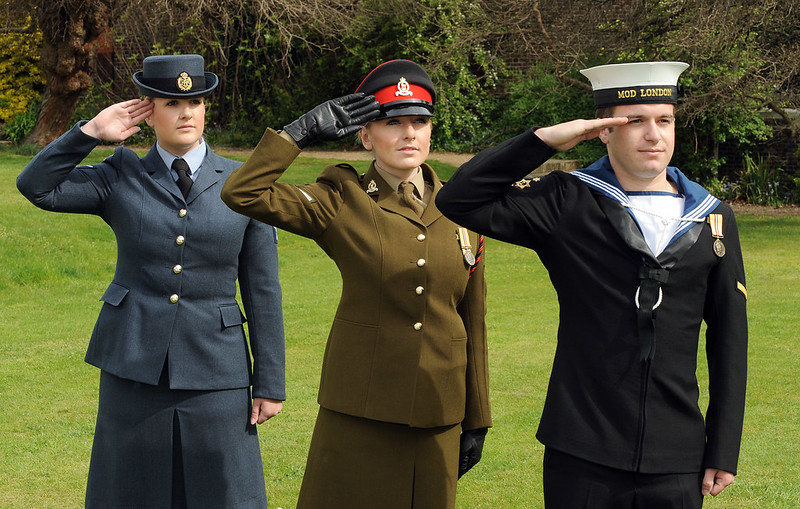 One of the most peculiar military salutes is the Polish, known there as “salutowanie dwoma palcami”, that is, salute with two fingers. The name is because the salute is done as in other nations, but extending only the index finger and the middle, and bending the ring finger and little finger, closing them with the thumb. The Polish salute has another peculiarity: the main purpose of the salute is to point out the white eagle, the national emblem of Poland, which is why Polish soldiers always wear the eagle in their headwear – with some exceptions – on the front in the center, even when wearing a beret. Currently, the Polish salute is done like French, that is, with the palm facing forward (Photo: Ministry of Defense of Poland). 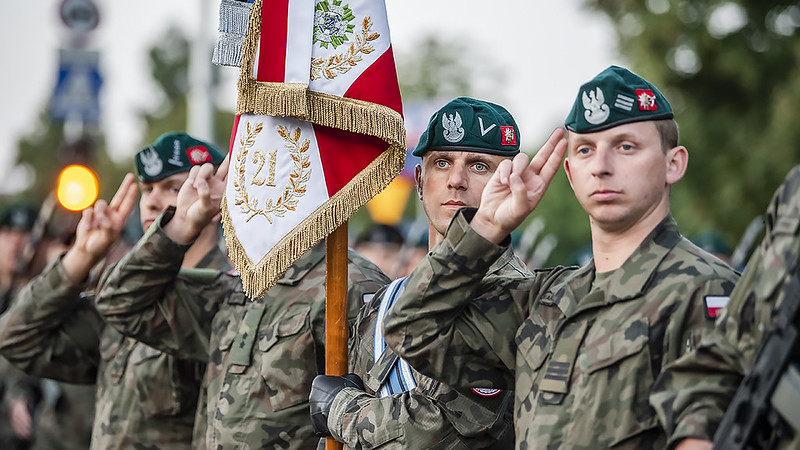 However, and with some exceptions, during the Second Polish Republic (1918-1939) it was usual to make the salute with the palm down (as we see in the photo under these lines). 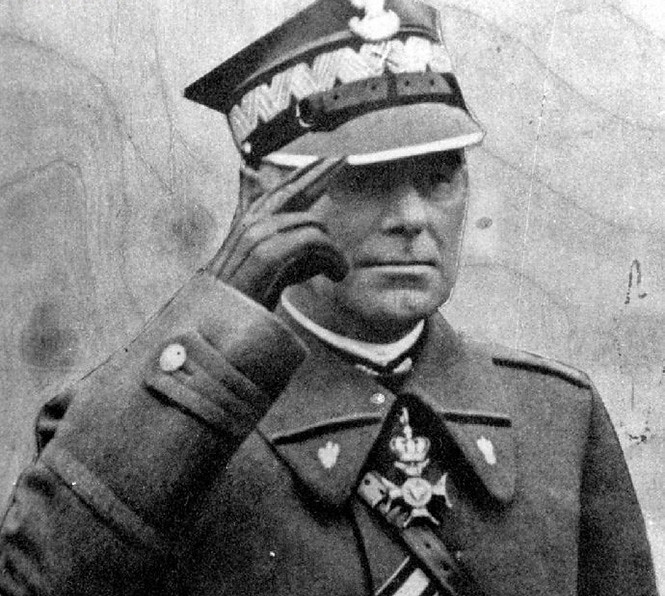 Perhaps the custom of saluting with the palm to the front extended in the Polish Army because many soldiers of that country ended up fighting framed first in the French Army and then in the British. Incidentally, the Polish two-finger salute caused some complaints of British officers during the Second World War, as they considered it a lack of respect, as he thought that the Poles were giving them the Boy Scout salute (which is identical to the Polish, but extending three fingers instead of two). For this reason, the Polish soldiers in the British Army used to make the British salute with the palm in front, at least in the presence of British officers.

The origin of the Polish salute is as uncertain as the rest of the military salutes. The most common legend in Poland locates its origin in the Napoleonic Wars, when a military courier was hit by shrapnel, in spite of which he fulfilled his mission and when arriving before Prince Józef Poniatowski, he greeted him with the three remaining fingers of the hand, dying later. Poniatowski, admired by the bravery of the soldier, would have adopted the military salute for the Polish forces. However, other sources indicate that the salute did not appear until 1863 and would be of Russian origin, being adopted by Marshal Józef Piłsudski after the recovery of Polish independence in 1918, at which time the two-finger salute was made official.

Curiosities of the military salute in Spain

In Spain there is a very peculiar form of military salute that I have not seen in any other army: the salute with a weapon. It is done when a soldier is in arm position out of a formation, for example, during a guard. The weapon is taken with the right hand, the same one that is used for the traditional salute, so in this case the arm is extended and the forearm is folded until touching the right clavicle with the outstretched hand, as this image of the Manual of the Soldier of Marine Infantry of the Spanish Navy: 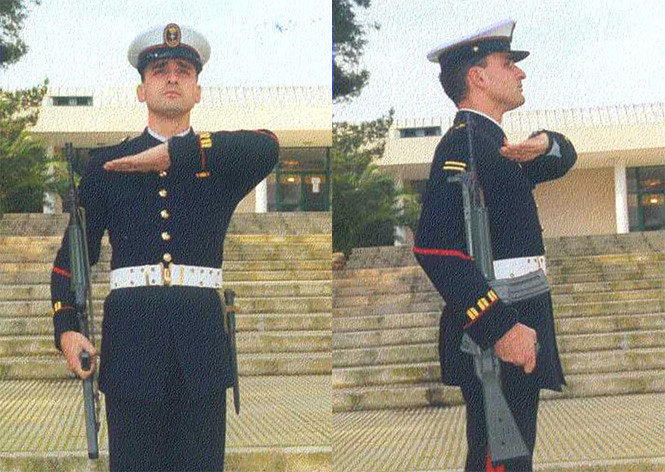 In Spain there was also an exception to the traditional military salute during the Spanish Civil War. Due to the communist influence and perhaps eager to differentiate themselves from the military of the other side, the People’s Army of the Republic adopted a salute like the military but with the fist closed, as we see in the following photo of an Assault Guard. 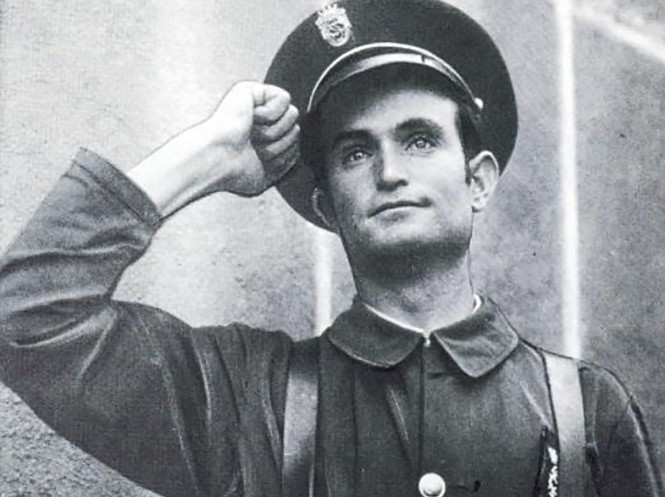 It was an absurd politicization of the military salute, since the traditional military salute was also used in the USSR. In the following photo we can see Soviet officers waving at the Victory Parade in Moscow in 1945. 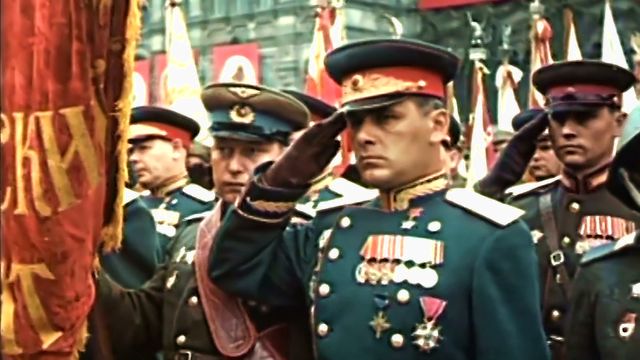