A while ago, seeing the photos uploaded by the US Navy to its Flickr account, I observed a detail that I found very curious: US sailors wearing the Spanish flag.

Specifically, they are the sailors of the destroyer USS Carney DDG-64, of the Arleigh Burke class. Since September 2015, this vessel has been deployed at the Rota Naval Base (Spain) as part of the NATO anti-missile shield. I’ve been searching through this destroyer’s album on Flickr and the first photo that appears of a sailor with the Spanish flag with the bull on his cap is this one taken on March 5, 2018 in the Mediterranean Sea. In it we see a member of the destroyer’s crew practicing shooting with an M-4 rifle on the ship’s flight deck. In this case he wears a navy blue cap. 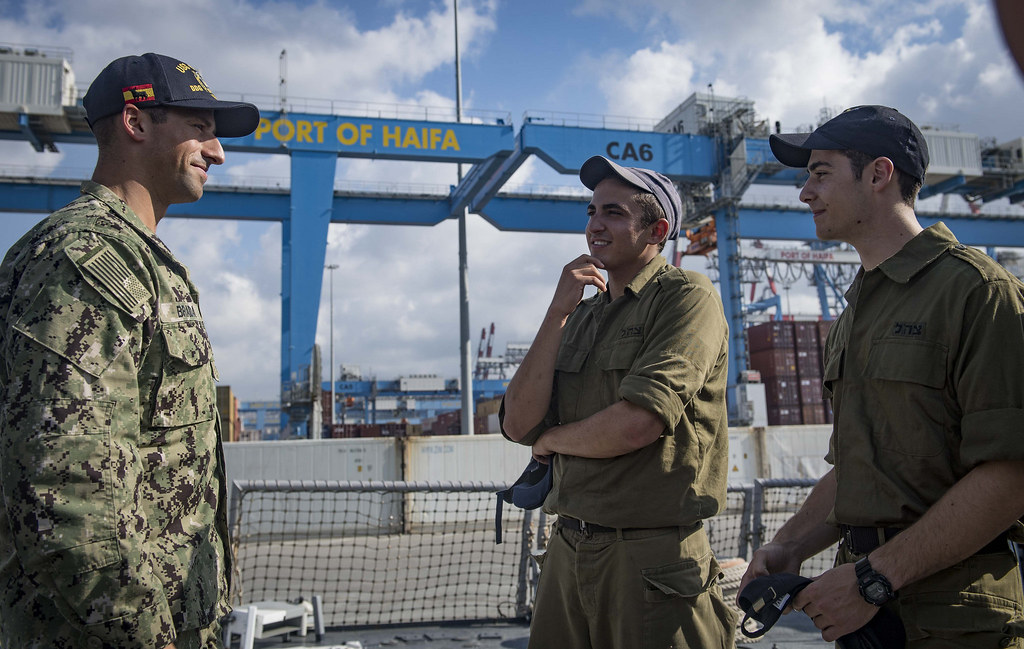 In this photo we see Lieutenant Zachary Braida wearing the flag of Spain on his cap during a visit of the USS Carney to the port of Haifa, in Israel. The officer was showing the ship to two Israeli sailors. In this case, the US seaman wears the Navy Working Uniform (NWU) Type III, with a wooded AOR-2 camouflage. Until now this camouflage was used by the Sea Bees (the US Navy’s construction battalions), by the Navy SEALs and their SWCC colleagues. However, this type of uniform has been extended to all sailors since 2017 and it is planned that by October 1, 2019, it will completely replace the NWU Type I, with pixelated camouflage in blue tones that became famous for the series “The last ship.” 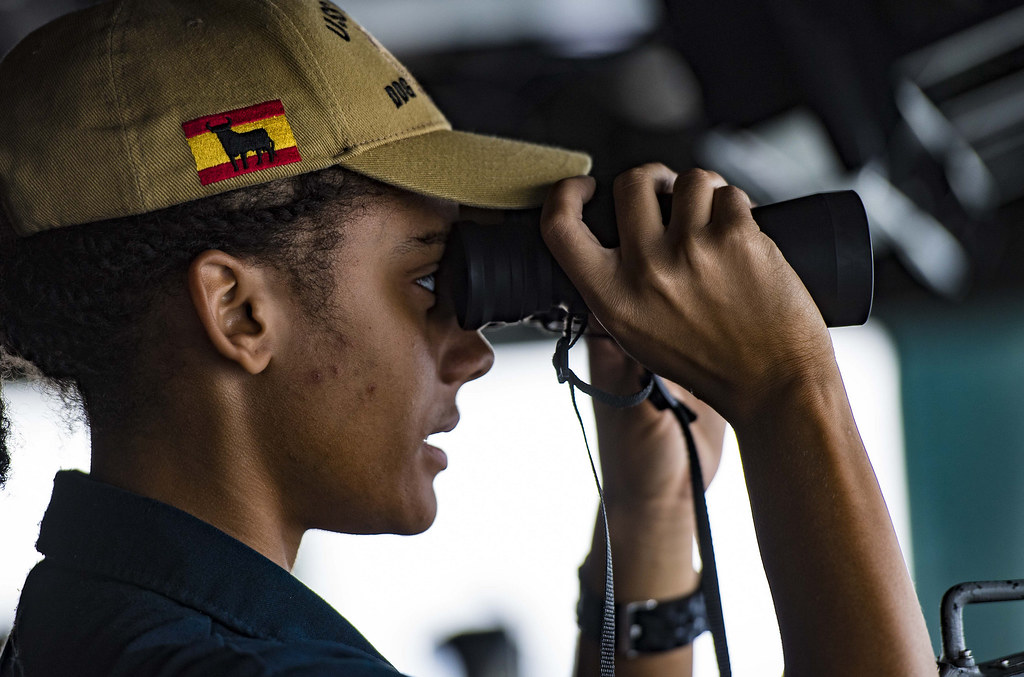 In parallel with the extension of the NWU Type III to all US Navy personnel, two years ago the use of coyote brown ball caps was also approved with the NWU Type III and Type II uniforms (the latter it looks like the pixel desert camouflage AOR-1). 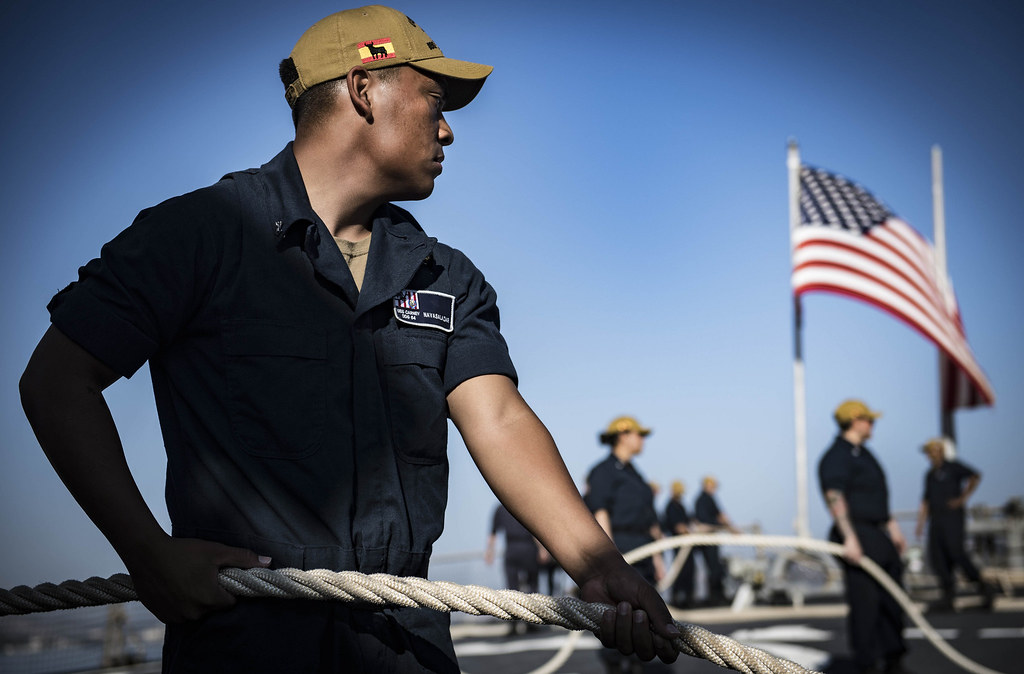 As seen in this image, coyote brown caps are also being worn in blue work uniforms known as IFRV (Improved Flame Resistant Variant), introduced in January 2017. 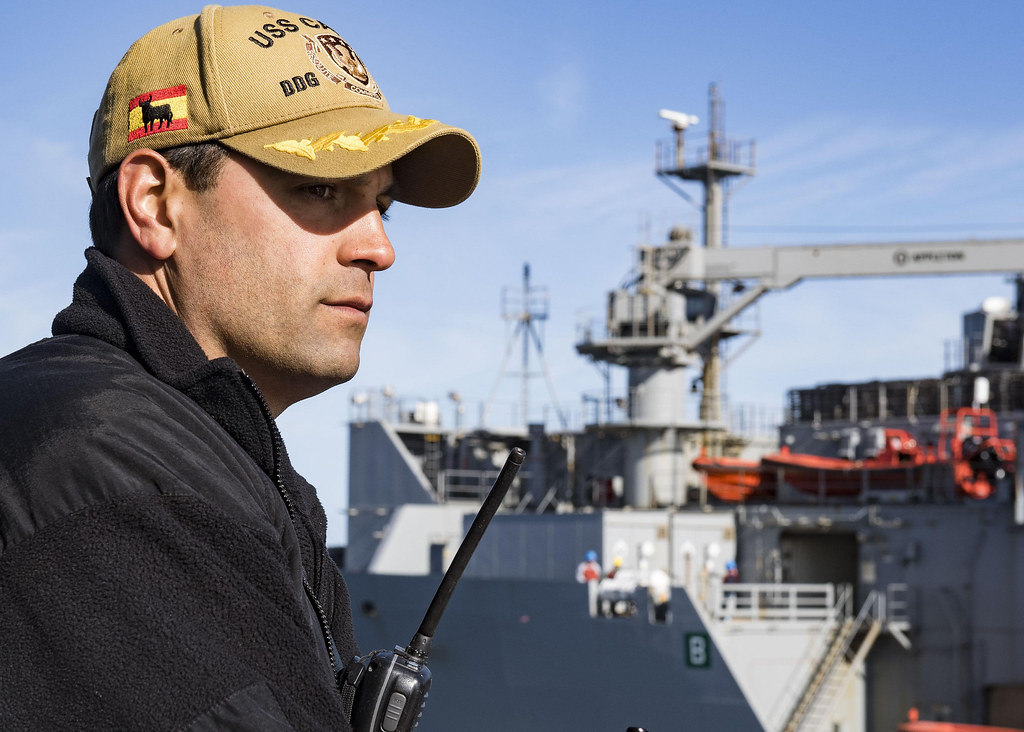 These caps are also authorized to wear rank badges, as we see in this picture of Commander Tyson Young, the commanding officer of the USS Carney. The use of these badges is strictly regulated by Article 3501.8 of the Uniform Regulations of the US Navy. 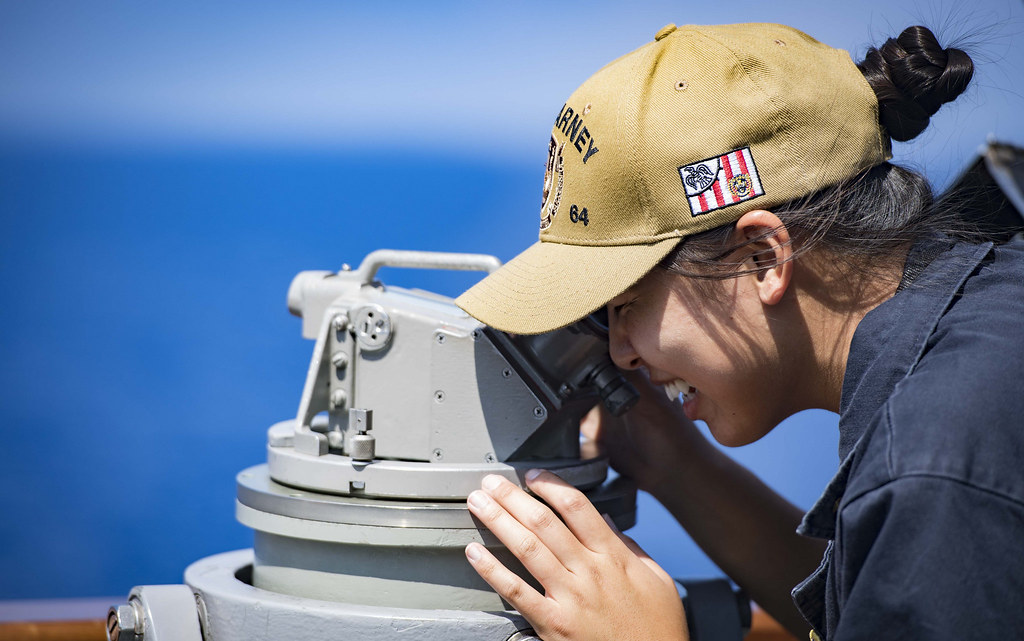 In the case of the USS Carney, the caps carry the ship’s flag on the left side. However, in the design of these caps there is a certain freedom. Each ship designs its own. For example, these are the caps they carry on the destroyer USS Donald Cook, another of Rota’s anti-missile shield ships. 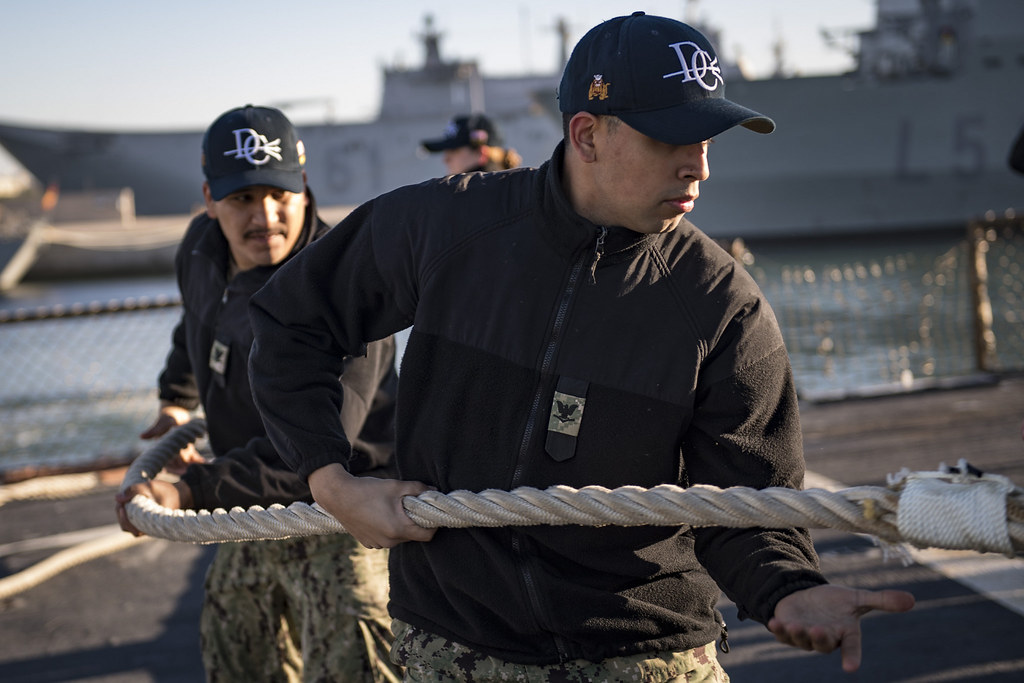 In the case of the USS Donald Cook, on the right side they carry the ship’s coat of arms, and on the left side they wear the United States Navy Jack (known in Spain as tajamar or torrotito flag). In the following photo you can see the USS Porter destroyer cap, also deployed in Rota. 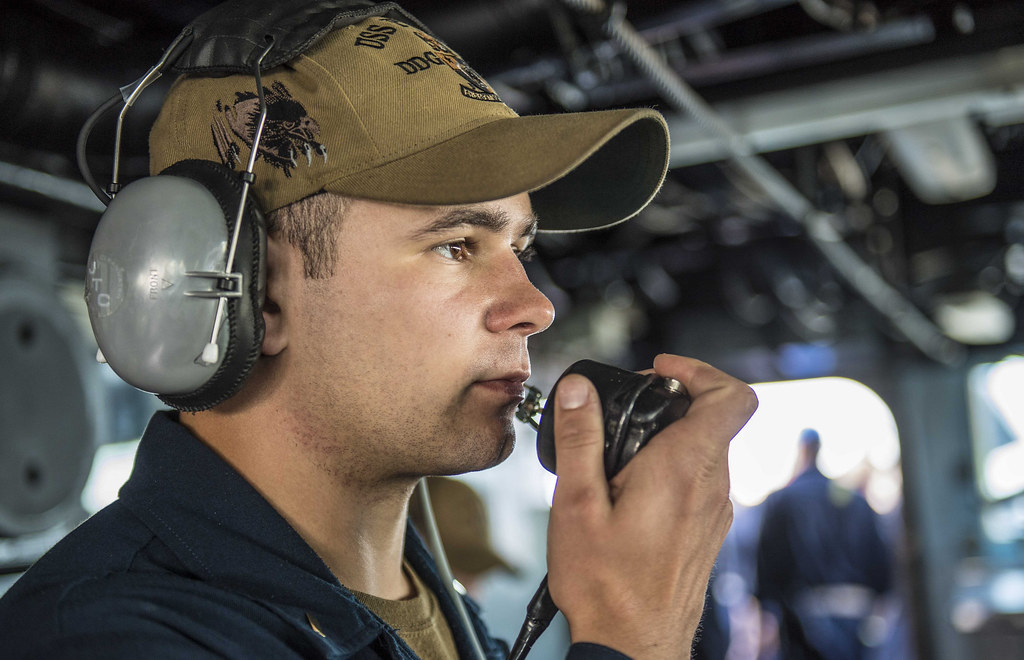 In the fourth destroyer of the Rota antimissile shield, the USS Ross, they wear a blue cap with no emblems on the sides, as shown in the following photo. 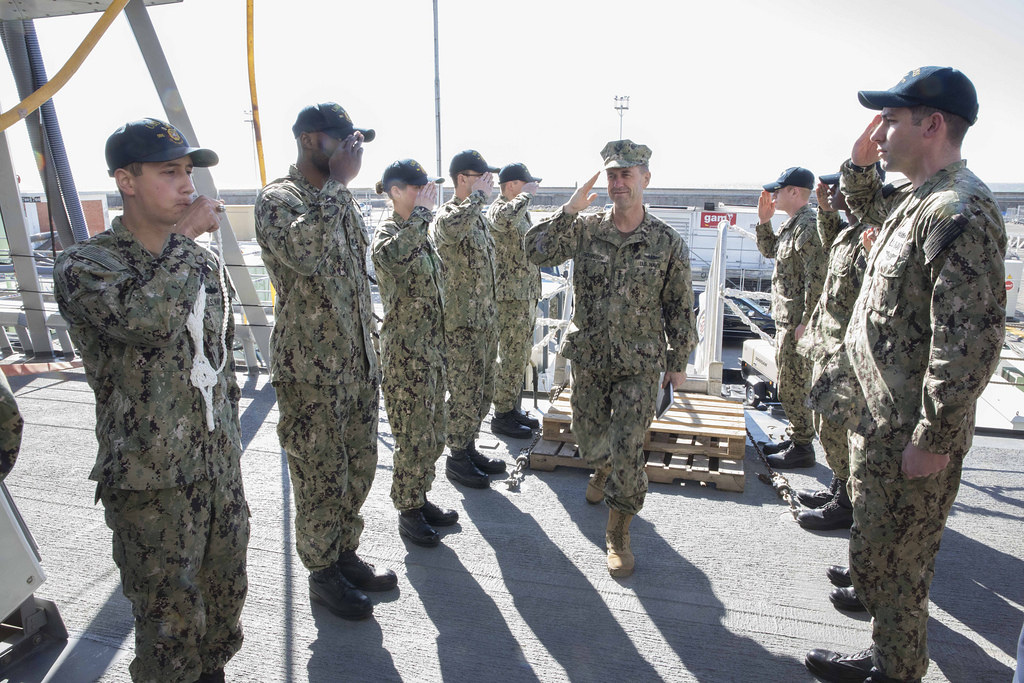