Censorship returns. Tàber, a public school in the Spanish town of Sarriá (Barcelona), has removed 200 stories from its library because they are not liked by leftist feminism.

“Toxic stories with a gender perspective”

The public television of Barcelona, Betevé, controlled by the municipal government of far-left that Ada Colau presides, announced the censorship in a news item broadcast the day before yesterday: “Tales emblematic as ‘The Legend of St. Jordi’, ‘Little Red Riding Hood’ or ‘The sleeping beauty’ are exemplars of toxic stories in gender perspective.” The arguments, purely political, correspond to the thesis of gender ideology, defended by leftist feminism.

According to the news, censored books represent 30% of the funds of the school’s children’s library. The censorship was carried out after an “exhaustive analysis of its content”, which has taken into account “the number of characters of each sex, if they were secondary players or what roles they develop”. The news adds that “it has been concluded that most of the female characters are secondary and they are attributed care or mothering tasks or have roles related to love.” But interestingly, two of the censored books, “Little Red Riding Hood” and “The sleeping beauty”, have female protagonists. On the other hand, do they want to censor all the literature that projects in stories the social reality in which we live, simply because left-wing feminism does not like that reality? Will the children end up with the only available story “The Communist Manifesto” by Marx?

The questions are nothing exaggerated. The news affirms, in addition, that “60% have some gender stereotype, but they have been maintained by not leaving the library without books.” In fact, only 11% of the books have been considered “positive in gender perspective”. The entity that has carried out this censorship exercise for ideological reasons alleges that “the stories that are read as a child have a great impact on the formation of the identity of the person, since concepts are naturalized at an age in which you do not have critical capacity.” They also consider that “if the stories are sexist they can contribute, in the long run, to violent, macho or even gender-based violence.” That is to say, these people consider that if you read “Little Red Riding Hood” or “The sleeping Beauty” that can cause you to end up being an abuser of women. Crazy.

The news of Betevé also warns that after censoring the library of early childhood education, is now “analyzing the primary library to discard sexist books.” The news ensures that this totalitarian initiative will be carried out in other Catalan public schools. What it does not explain is what they will do with the censored books: do they burn them, as the Nazis and the Communists did with the books they considered “incorrect”? These facts come to demonstrate, once again, the serious setback in liberties that the imposition of the gender ideology in Spain is implying. The Spanish Constitution protects in its Article 20 the right to literary creation and expressly prohibits prior censorship. The most curious thing is that those apprentices of dictators of progressive feminism are censoring children’s books in public schools because they do not conform to their ideology and then still have the face of calling “fascists” those who do not think like them. 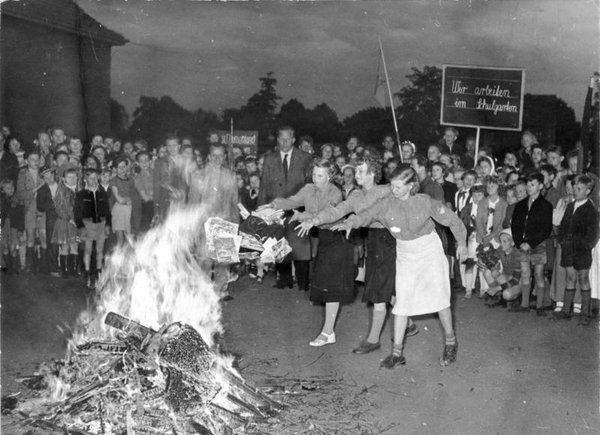