The so-called “feminist strike” of March 8 in Spain was not only a politically leftist call, but also showed a blatant Christianophobia, with attacks on Catholic buildings.

The attacks of the left feminists did not even respect the historic buildings. In Corunna, the Collegiate Church of Santa María del Campo was attacked. It’s a temple from the 12th century (photo by @zorbanticton). 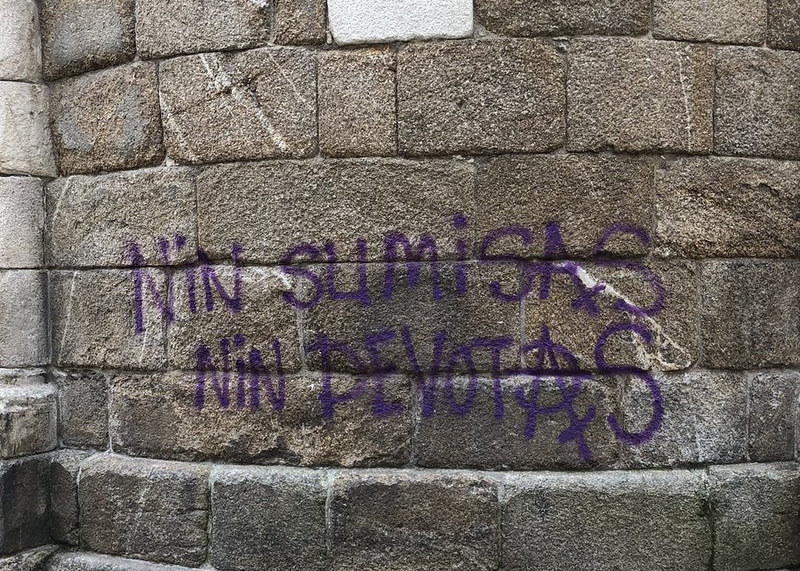 In Granada, the Convent of the Incarnation was attacked. It’s a historic building of the sixteenth century. It was painted with blasphemous slogans allusive to the feminist strike (photos of @granadacofrade). 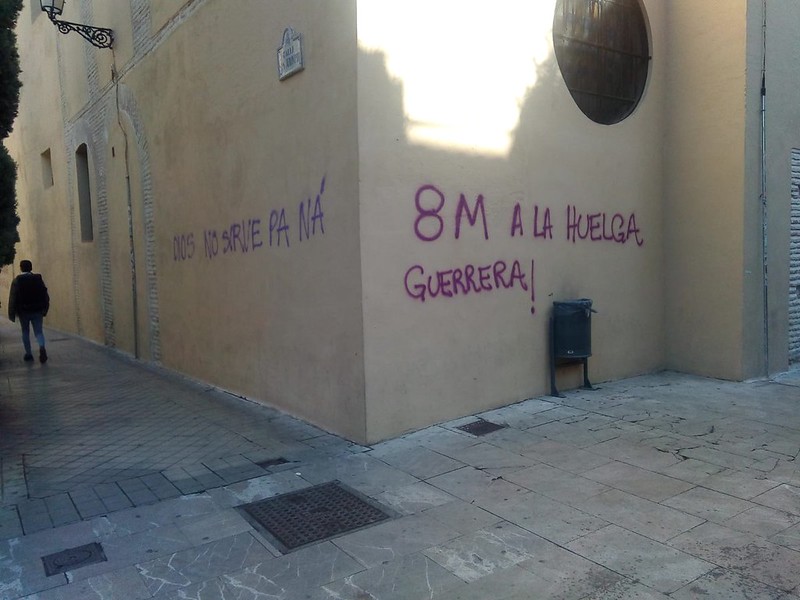 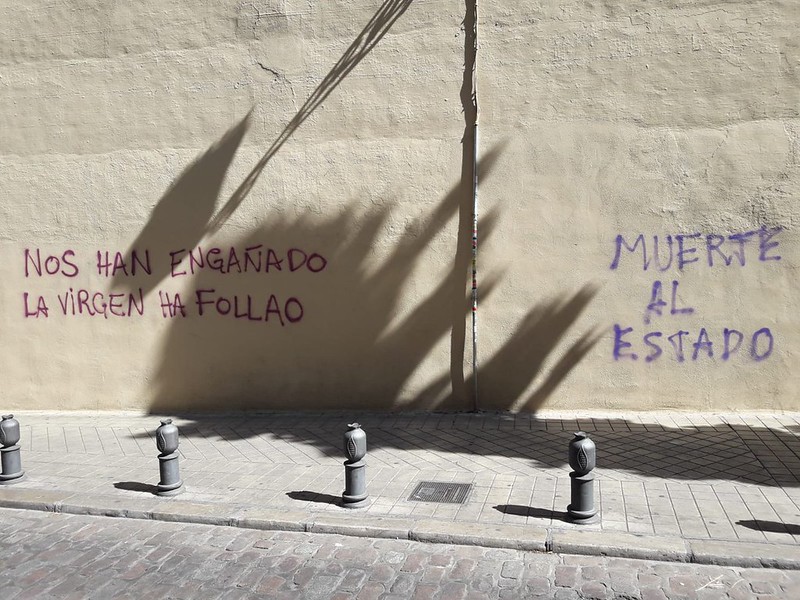 Also in Granada, they made graffitis in the Parish of the Immaculate Conception (Capuchinos), which had already been attacked last year also on the occasion of March 8 (photo by @hierbaamarga). 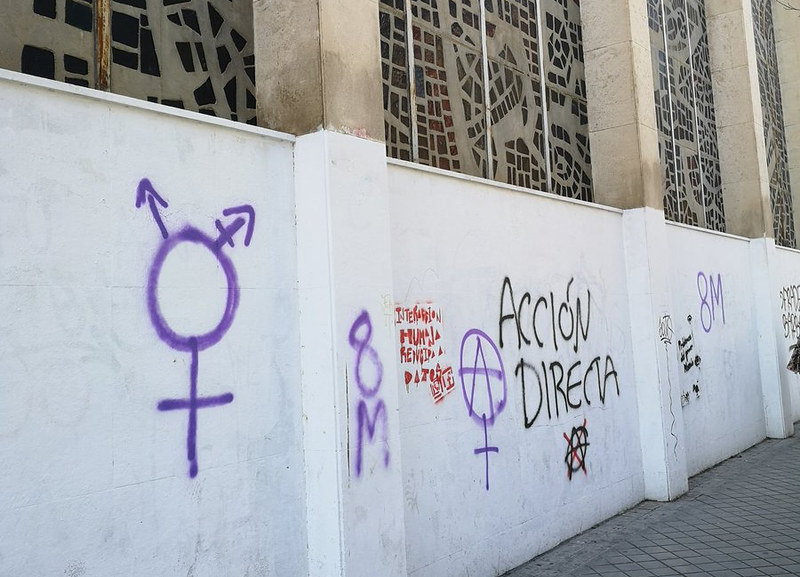 In Cartagena, San Fulgencio Cartagena Parish has been attacked (photo by @cartagena_hoy). 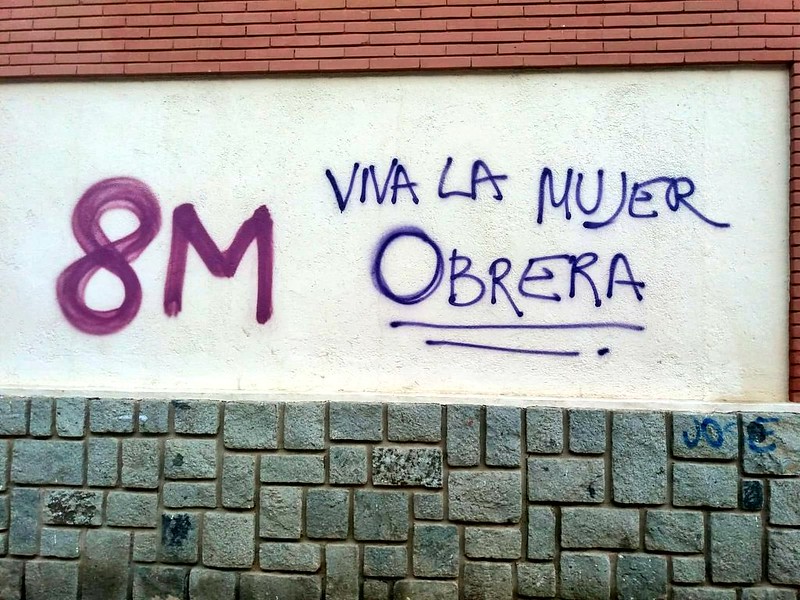 In Logroño, a feminist group of the extreme left hung a banner in the Cathedral of Santa María de la Redonda with the text “you will drink the blood of our abortions”. A message of psychopaths that has caused outrage in the capital of the region of La Rioja. The banner was withdrawn by the National Police (photo: @Mujeres_enREBEL).

In Madrid, according to the archbishopric denounced on its website, “several temples of the diocese have dawned with offensive graffiti to the Catholic faith on their facades and even with some locks covered with silicone” (photo: Archbishopric of Madrid). 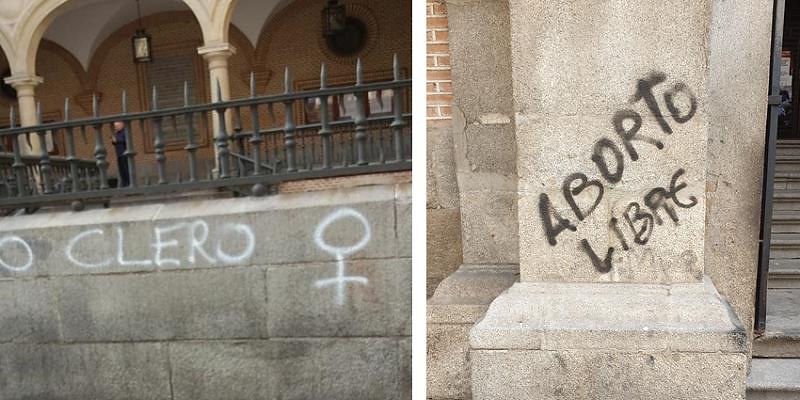 In Rivas Vaciamadrid, a town in Madrid governed by a far left coalition led by Izquierda Unida, the Santa Monica Parish was attacked; it had already been attacked in 2018 by March 8 (photo by @P_Ovetensis). 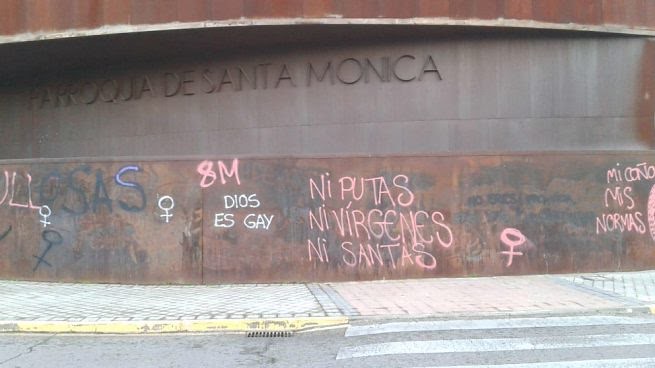 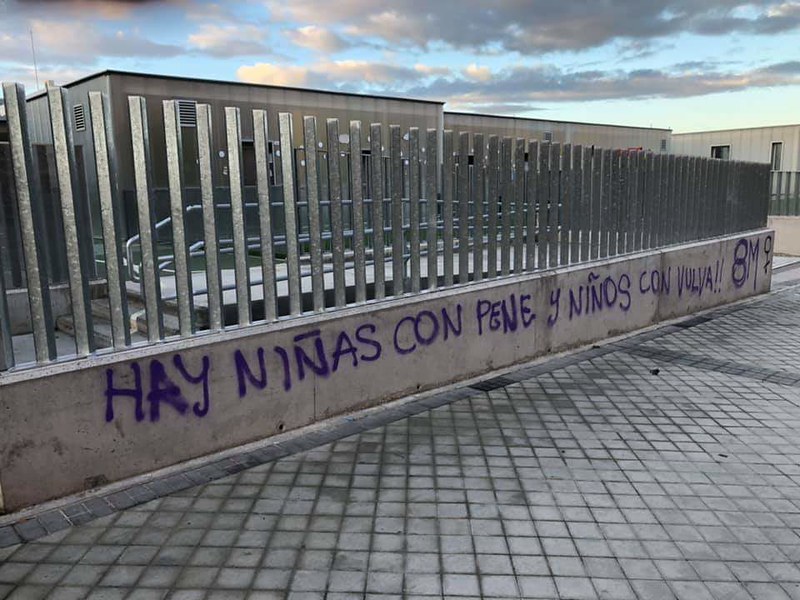 In Seville they painted on the facade of the Church of San Roque (photo by @_JoseMDelgado_). 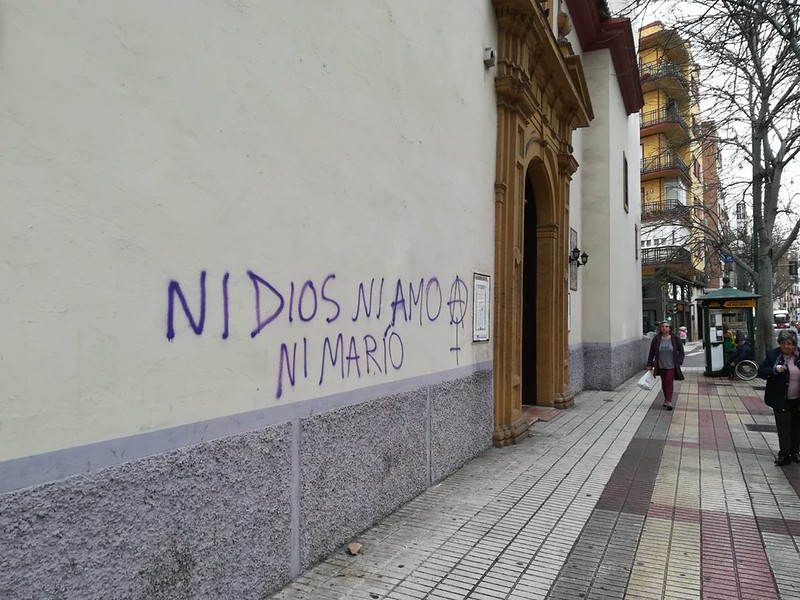 In Valladolid, far-leftists of the CNT assaulted the Archdiocese and proffered insults against the Catholic Church, as well as shouting in favor of prenatal murder (photo: @CNTValladolid). 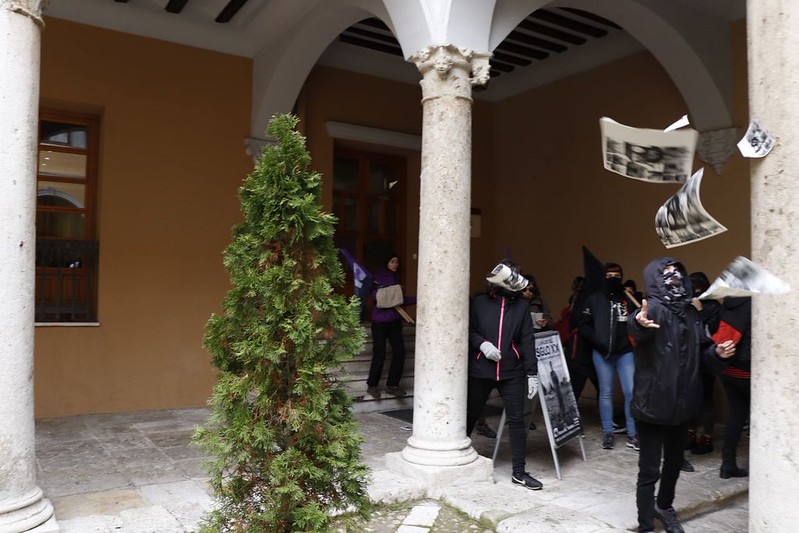 Leftist feminists did not attack any Islamic center

The most curious thing is that no matter how much I searched, I have not found a single piece of news or a tweet that shows attacks on Islamic centers. As I mentioned here on March 2, the State Federation of Feminist Organizations had launched a manifesto facing the March 8 that attacked the Church and at the same time claimed against “Islamophobia”. The text criticized countries such as the United States, Brazil or Italy, but did not contain a single criticism against Islamic regimes such as those of Saudi Arabia or Iran, which discriminate badly against women, treating them as second-class human beings. Apparently, leftist feminism wants us to believe that women are treated worse in the Christian West than in Islam.

However, not even an organization as openly progressive as the UN supports that idea. In its “Gender Inequality Index”, among the 20 most egalitarian countries there are 15 mostly Christian countries: Norway (whose State is confessionally Lutheran), Switzerland, Australia, Ireland, Germany, Iceland, Sweden, Netherlands, Denmark (also a confessionally Lutheran state), Canada, the United States, the United Kingdom, Finland, New Zealand, Belgium, Liechtenstein and Austria. Spain is currently ranked 26 out of a list of 189 countries. Among the 20 countries with the least equality, 14 belong to the Organization for Islamic Cooperation: Niger, Central African Republic, Chad, Sierra Leone, Burkina Faso, Mali, Mozambique, Yemen, Guinea-Bissau, Guinea, The Gambia, Djibouti, Malawi and Costa of Ivory. Leftist feminism should recognize it once and for all: women’s rights matter to them much less than continuing to feed a visceral hatred against Christianity.

(Main photo: @Mujeres_enREBEL. Anti-Catholic banner and with a message of psychopaths -‘You will drink the blood of our abortions’- placed by a left-wing feminist group in the Cathedral of Santa María de la Redonda, in Logroño, on the occasion of March 8)