On the occasion of Women’s Day, ultra-left feminists have attacked Catholic parishes in several Spanish cities. There is no news that they have attacked any mosque.

They attack several parishes in Madrid

This morning the Archdiocese of Madrid has denounced that “Church of the Holy Spirit (Serrano, 125) and several surrounding buildings have dawned with some painted in favor of abortion and offenses to the Catholic faith, as well as several silicone-covered locks.” The Archdiocese has published these two photos of the attacked parish: 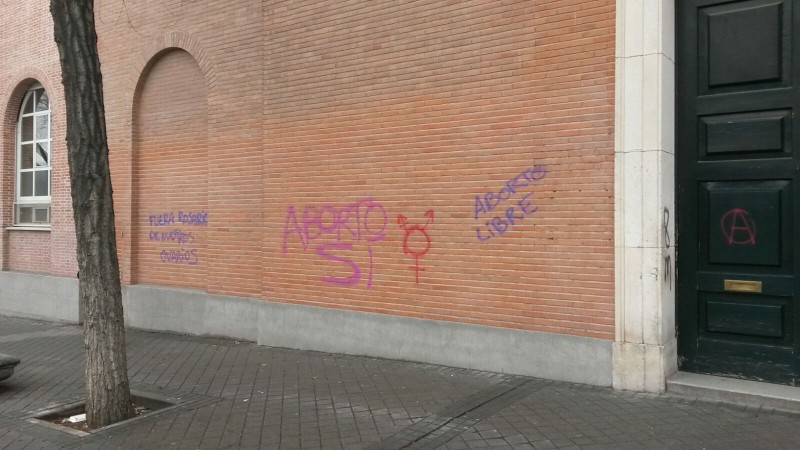 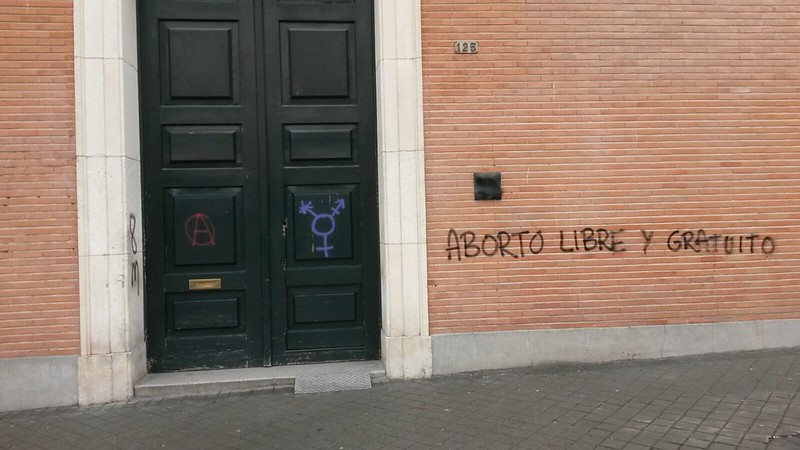 The Archdiocese of Madrid has also denounced another attack with graffiti to the parish of San Cristóbal, in Ciudad Pegaso. One of the painted, in the height of cynicism, claimed “respect.” As we see in the photo that heads this entry. Another painting said “the Virgin would also go”, in reference to the feminist and abortionist strike called today by the far-left, as we see in this photo published by Aci Prensa: 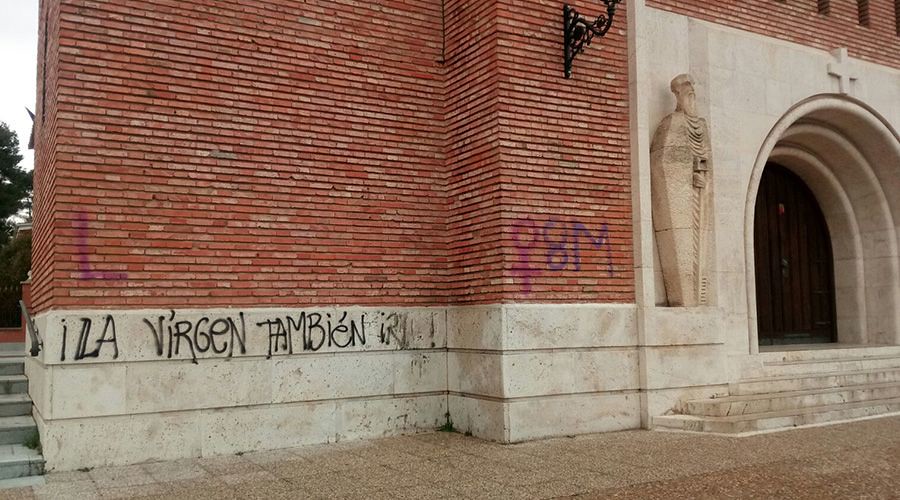 It is necessary to remember that in September of 2016, before an attack with paint in a mosque, the party of the communist mayor Manuela Carmena go quickly to condemn what happened. However, and despite the fact that the Archdiocese of Madrid denounced graffiti against Catholic parishes this morning, Carmena’s party has not yet condemned these christianophonic attacks.

Likewise, COPE Coruña has posted on its Twitter account this photo of another feminist painting appeared yesterday in the Castrense Church of San Andrés, in La Coruña, with the text “I did not leave your rib, you came out of my pussy”, in Galician: 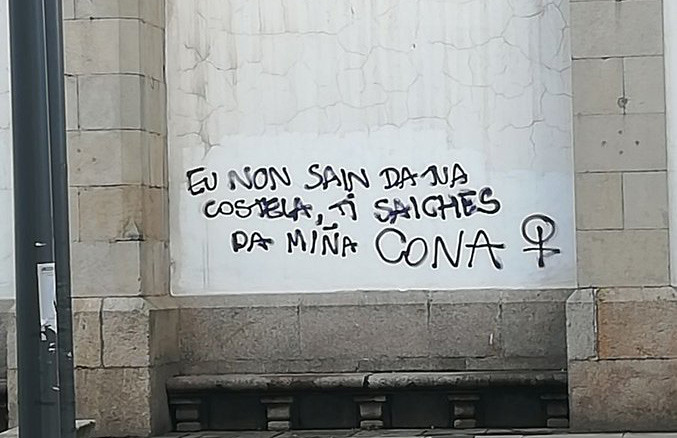 Noemí Noguerol has published this morning on her Twitter of another cristianophobic painting in the Church of San Jorge, very close to the Town Hall. It is in the part of the temple that faces Calle San Agustín and says, in Galician, “the Church that illuminates the most is the one that burns”. 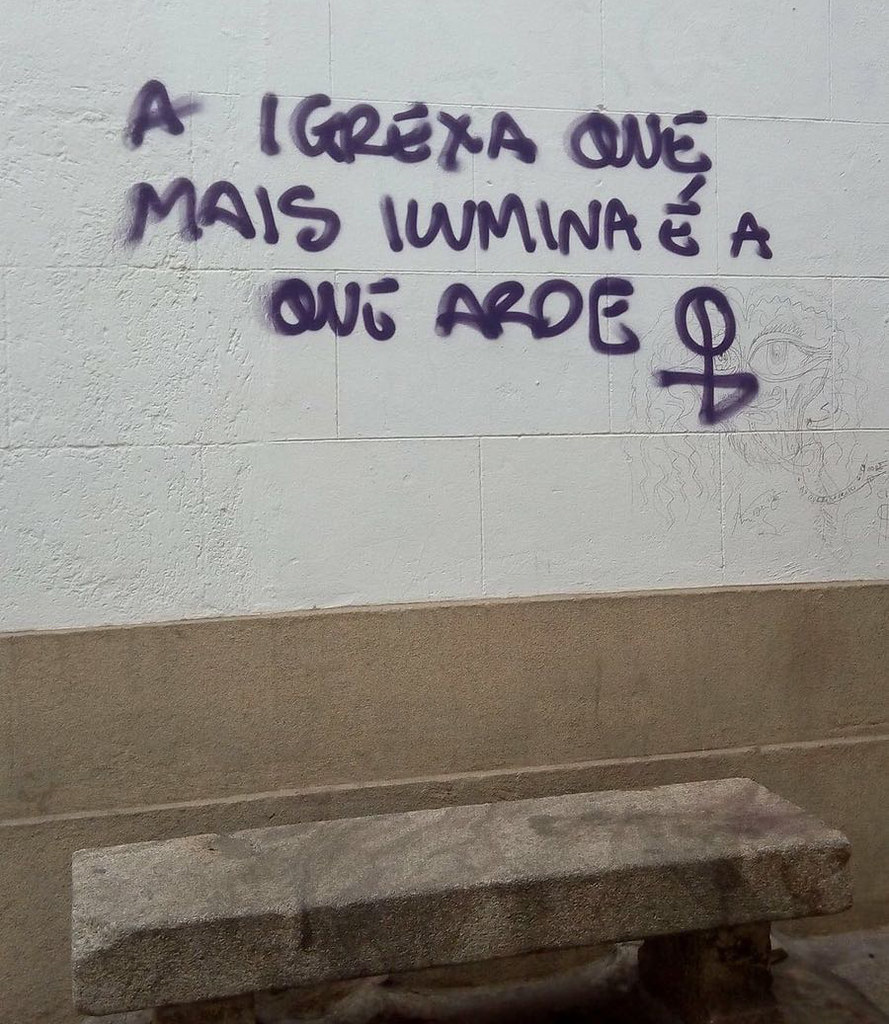 As reported by the local newspaper El Ideal Gallego, feminists graffitis have also appeared in the Church of Santo Tomás, in Monte Alto, and in the headquarters of the Royal Galician Academy, in the Old City, among other places. According to COPE Coruña, among the temples attacked is also the parish of the Divina Pastora (Capuchinos) of the herculine city. The fact is that, like Madrid, the capital of A Coruña is governed by one of the electoral brands in which Podemos -a far-left party- participates, the Marea Atlántica (Atlantic Tide). Although the graffiti began to appear yesterday, the Twitter account of the City of La Coruña has not yet published any condemnation of those attacks.

They attacked a parish in Granada

Several christianophobic graffitis and in favor of abortion have also appeared in the Parish of the Immaculate Conception (Capuchinos) of Granada, specifically on the walls that face the Calle Ancha de Capuchinos, as seen in this photo from @_Albertibiri_:: 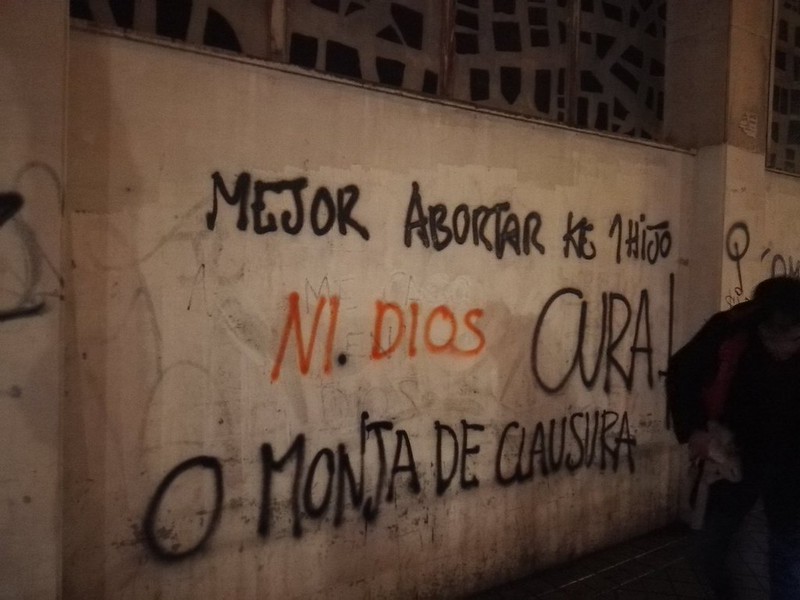 Graffiti in a parish in Seville

In Seville, this Thursday a graffiti appeared with the text “Ni Dios ni amo” (Neither God nor master) in the church of the old convent of La Paz, on Bustos Tavera Street, as denounced by Gente de Paz website, which has published this photo of the parish attacked: 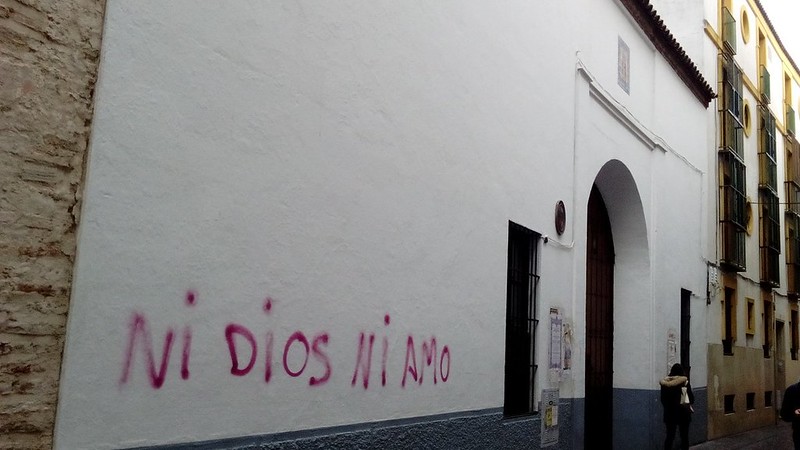 Attack on a parish in Rivas Vaciamadrid

This morning the Popular Party councilor Ricardo Gómez Alonso has published on his Twitter these two photos of feminist graffitis in the Parish of Santa Monica in Rivas Vaciamadrid: 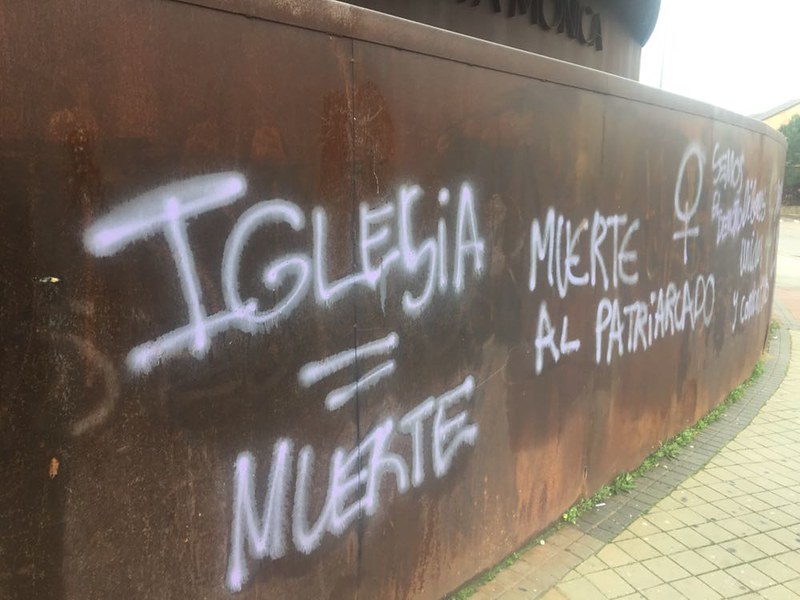 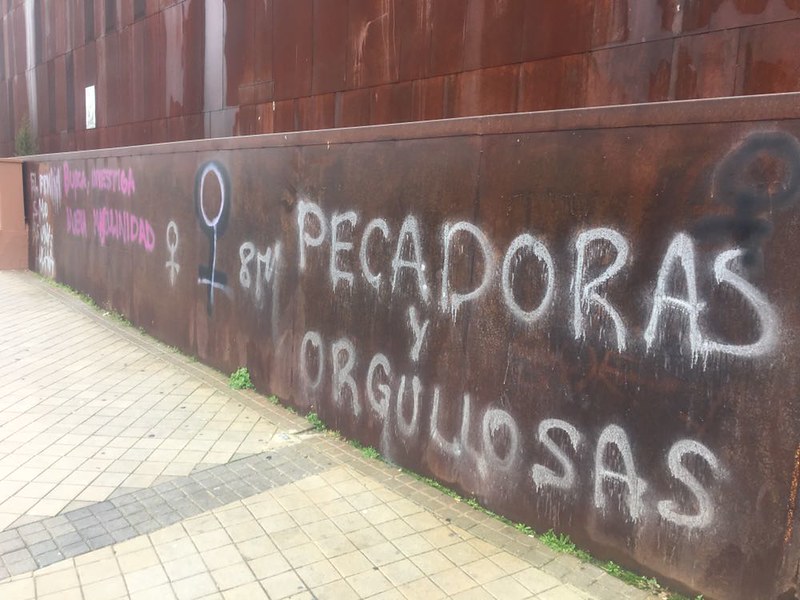 Coincidentally, Rivas Vaciamadrid is also governed by an far-left coalition formed by Izquierda Unida, Equo and Somos Rivas, the local brand of Podemos. Although the City Council’s Twitter account has been cheering on today’s feminist strike, it has not yet posted a condemnation message of the Christian-Phoenician attack on the parish of Santa Monica.

Communist attack on a hermitage in Getafe

Last night, the Observatory for Religious Freedom and Conscience published on its Twitter this photo of the Hermitage of San Isidro, in Getafe (Madrid), attacked with a graffiti in favor of the feminist strike signed with the acronym UJCE, which correspond to the Union of Youths of Communists of Spain, organization integrated in Izquierda Unida, the parliamentary partners of Podemos. 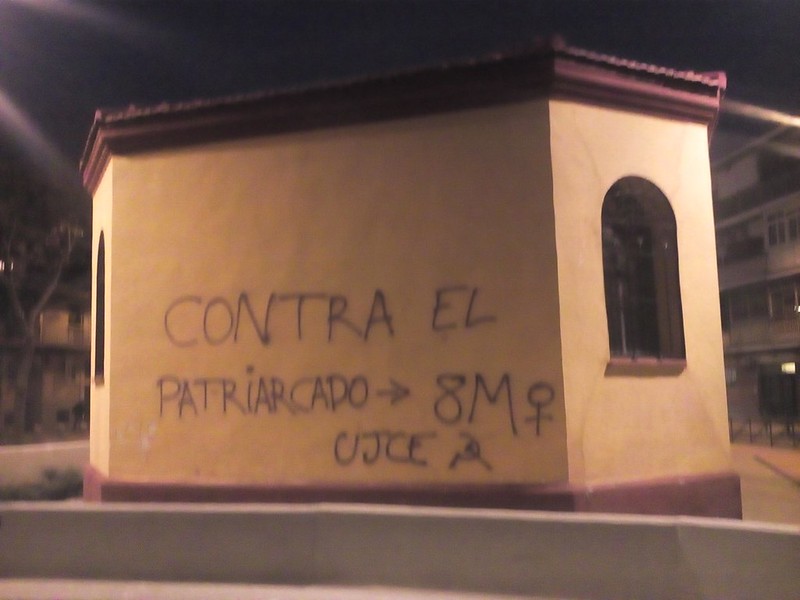 Attack on a parish in Córdoba

On the other hand, the Parish of Santa Isabel de Hungría, in Córdoba, appeared yesterday with a green painted “Femislam” (photo by @osdiol): 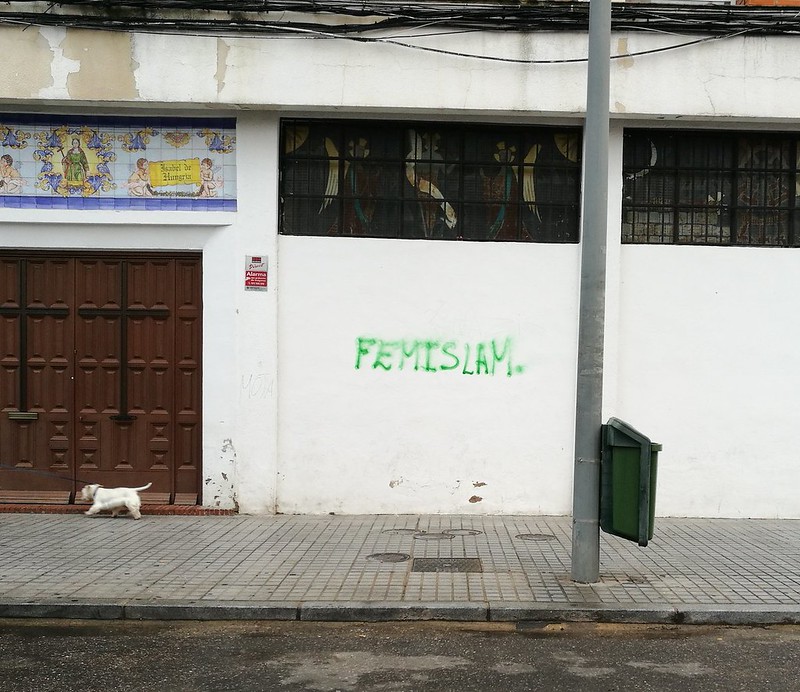 To complete this wave of christianophobic attacks, feminist writer Bel Olid, militant of the far-leftist party CUP, called today to “burn the Episcopal Conference” before the cameras of TV3, the Catalan public television, as shown by this video published by VoxTempli:

Precisely the far-leftists of Arran, a group linked to the CUP, have perpetrated attacks on Catholic and evangelical churches in recent years, bluntly signing their attacks with their brand. The CUP has never condemned these attacks but it has condemned graffitis against a mosque in San Celoni (Barcelona).