The party, anti-Semitic and favorable to Iran, says it has adopted a centrist turn

Hungary: the left joins the racists of the Jobbik party against the conservative Viktor Orbán

There is the often mistaken custom of labeling as “far right” every extremist movement that resorts to a patriotic discourse. A new example again challenges that scheme.

A turanist and anti-capitalist party, and contrary to the European Union

In 2003 a new party was founded in Hungary: the Jobbik Magyarországért Mozgalom (Movement for a Better Hungary), also known as Jobbik. For years it has been considered one of the most radical parties of what some call “extreme right”. For years it has stood out as an anti-Semitic and anti-Gypsy party. One of the most peculiar theses of this party has been its defense of the turanism, an ideological current that considers that the Hungarians are related with the Turkmens peoples. For this reason, the Jobbik has called for closer ties with Turkey and has supported the Erdogan government. In addition, like other similar movements, the Jobbik is anti-liberal and anti-capitalist and also contrary to the European Union. In jobbik rallies the European flag has even been burned. 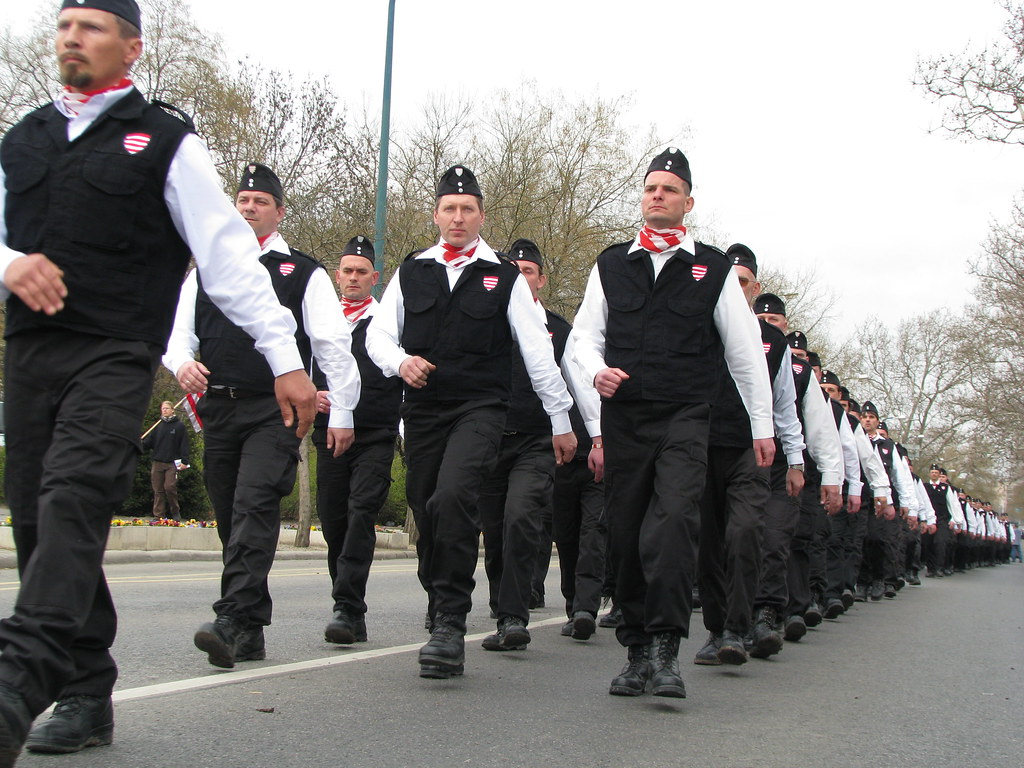 Members of the Hungarian Guard at a march held in Budapest. This paramilitary organization, linked to Jobbik, was outlawed in 2009 but has continued to act under other names (Photo: Orange Files).

The anti-Semitism of the Jobbik

The Jobbik has some similarities to classical fascism, including the creation of militias. In 2007 members of the Jobbik formed the Magyar Gárda (Hungarian Guard), a paramilitary group that was outlawed in 2009, despite which it has continued to act under other names, often at Jobbik rallies. In November 2012 a deputy of the Jobbik, Márton Gyöngyösi, caused a scandal when he claimed to create blacklists of Jews, including members of Parliament, invoking “national security”. In 2013, the Jobbik held a demonstration against the celebration of the Jewish World Congress in Budapest; in the march, the leader of the Jobbik Gábor Vona declared: “The Israeli conquerors, these investors, should look for another country in the world for themselves because Hungary is not for sale.” In 2015, a local leader of the Jobbik, Tibor Ágoston, was condemned for describing the Holocaust as “Holoscam”. These statements have caused great outrage. It must be remembered that the Holocaust killed hundreds of thousands of Hungarian Jews. As some extreme left groups do, the Jobbik combines this anti-Semitism with its support accusations of “genocide” against the State of Israel.

Jobbik: in favor of the Islamic dictatorship of Iran and against the United States

The party also coincides with other extreme left and far right groups in its affinity to Putin’s Russia and its anti-Americanism. For example, in 2011 the Jobbik made a demonstration of support for Iran in front of the United States Embassy in Budapest. On the Jobbik website the speech of Deputy Márton Gyöngyösi was published in that protest: “the West subordinated to the Zionist interests has been operating indirect propaganda-campaign for decades against the ancient and proud, freedom and independence-loving Persian nation.” The Jobbik deputy even made a laudatory reference to that Islamic dictatorship for supporting two markedly anti-Jewish terrorist groups: “Iran’s only crime is that in the democratic Lebanon she helps Hezbollah and the Hamas, which is governing in the Gaza Strip as a result of a democratic election, and consistently supports the fight of the suffering Palestinians against the occupying Zionist terror. This is why the Persian people and their leaders are considered pariahs in the eyes of the West serving Israeli interests.” Gyöngyösi ended his speech with these words: “God bless the Persian people, all the peace-loving people of the world, God bless you!” 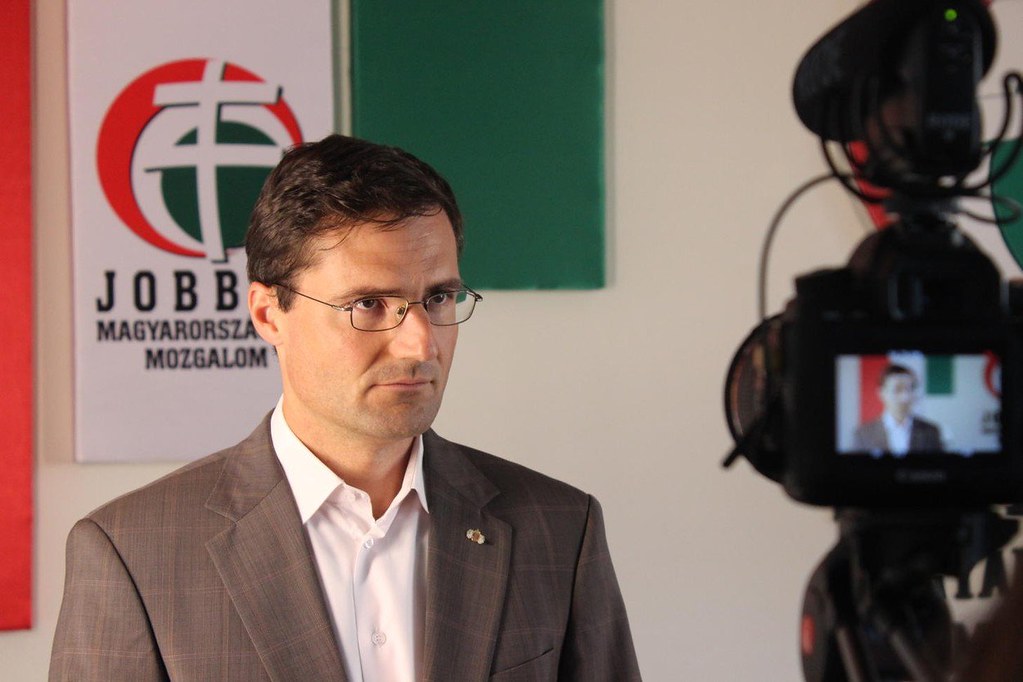 Deputy Márton Gyöngyösi is one of the leaders who lead the alleged centrist turn of the Jobbik. In 2011 he led a rally in favor of the Islamic dictatorship of Iran, and in 2012 he called for blacklists of Jews in Hungary (Photo: rofimedia.cz).

The Hungarian left, delighted with the alleged centrist turn of the Jobbik

In 2018 the Jobbik launched a new strategy to adopt a centrist image, led first by Gábor Vona and now by Tamás Sneider. International media spread this supposed change. However, and as the website of the party indicates, the aforementioned Márton Gyöngyösi is currently vice president of Jobbik. Has he gone from asking for blacklists of Jews and supporting Iran to becoming a centrist in a few years? Although there are serious doubts about the change of direction of that party, its new centrist suit has been good on the left. In March, an agreement was announced between the Jobbik and the leftists of Lehet Mas a Politika (LMP) to present publicist Róbert Puzsér as a joint candidate for the Budapest mayor’s office. The LMP is part of the European Green Party. In April the German MEP Ska Keller, co-chair of the European Green Party, was asked about this alliance between the Jobbik and the LMP, and whether this alliance will mean the expulsion of the LMP from her Party. Heller was unable to give a clear answer and simply said: “It’s crazy”. 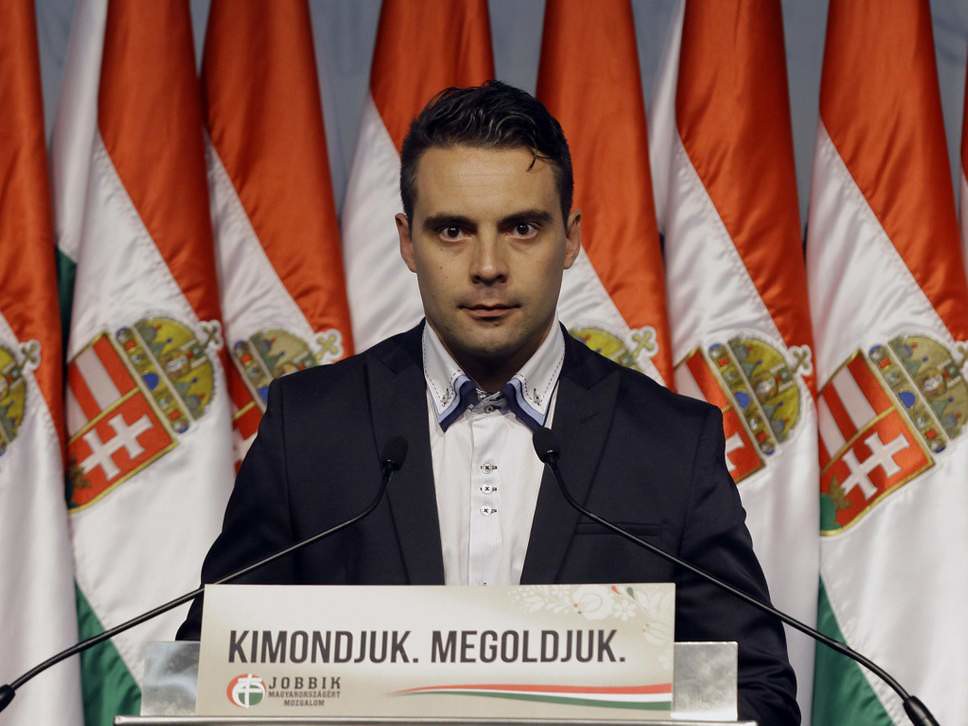 Gábor Vona was the president of Jobbik when this party began its apparent centrist turn in the spring of 2018. In 2013, Vona led a Jobbik demonstration against the Jewish World Congress in Budapest (Photo: AFP PHOTO/Peter Kohalmi).

The left and the Jobbik: “anti-Orbánism at any cost”

The withdrawal of the candidacy of Róbert Puzsér, supported by the Jobbik and the LMP, has caused another party of the left to show an interest in allying itself with the Jobbik. Yesterday Gergely Karácsony, leader of Párbeszéd (a leftist green party), acknowledged that “we are discussing with the Jobbik and LMP for a total opposition”. Karácsony was a candidate for Hungary’s presidency last year in the coalition formed by the Hungarian Socialist Party (MSZP) and Párbeszéd, getting 12% of the vote. Orbán won the elections in a resounding way. The Jobbik was the second force with 20% of the votes. It seems that the Hungarian opposition is willing to put aside the ideological differences to defeat Orbán. The Visegrád Post has described this coalition as “anti-Orbánism at any cost”. 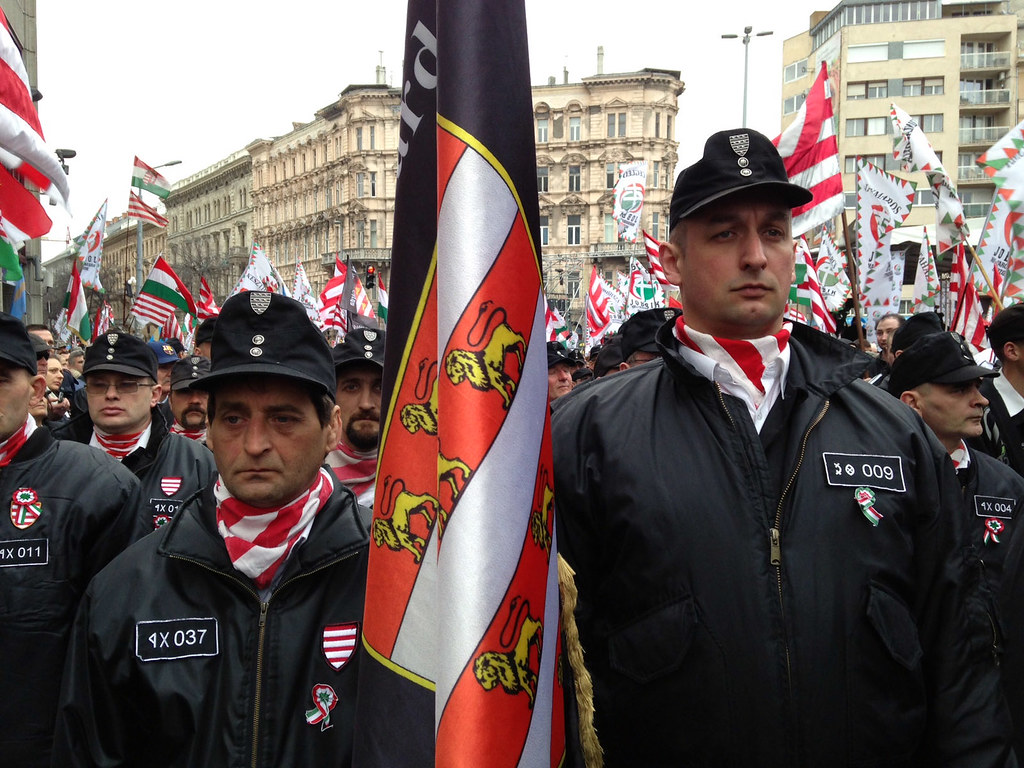 Members of the New Hungarian Guard at an meeting of the Jobbik in March 2013 (Photo: Botos Tamás).

An operation supported by the influential progressive newspaper The Washington Post

The contacts between the Jobbik and the left are not recent. In March 2018, before the last parliamentary elections won by Orbán’s Fidesz, the progressive American newspaper The Washington Post already opted for an alliance between the left and the Jobbik: “On the surface, at least, the ideological divisions alone would seem insurmountable. The two largest opposition parties come from opposite sides of the political spectrum — the far-right Jobbik party and the left-of-center Socialists,” Griff Witte said in the news. In addition, he assured that the Jobbik “has tried to stake out ground in the center, apologizing for its prejudicial past and even moving toward the left by emphasizing calls for economic justice and equal pay. The conversion would seem to make possible what was once unthinkable: cooperation between Jobbik and three smaller left-of-center parties, including the Socialists.“

The leftist Karácsony, willing to cooperate “even with the devil”

This support of a very influential newspaper in the world and the inability to defeat Orbán has been bringing positions between the Jobbik and the left. In January, the Hungarian conservative magazine Figyelő denounced that the opposition is willing to dance with the devil to defeat Orbán, adding: “Recent anti-semitic controversies affiliated with Jobbik clearly shows: their remission announced a few years back is just an act.” The magazine recalled that before the parliamentary elections of 2018, Karácsony had already declared: “We must cooperate with everyone, even “with the Devil,” in a veiled reference to the Jobbik. In February, Karácsony made a controversial statement denying that making blacklists of Jews is Nazism, when asked about the controversial anti-Semitic proposal made by Jobbik in 2012. 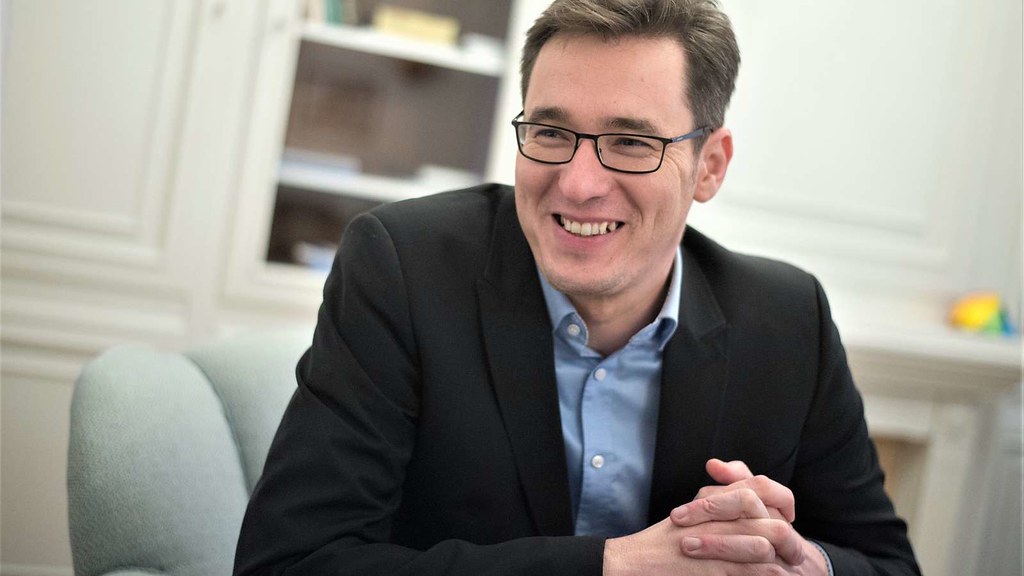 The leftist Gergely Karácsony, leader of the progressive party Párbeszéd, was the candidate of the coalition of lefts between that party and the Hungarian Socialist Party in the Hungarian parliamentary elections of 2018, obtaining 12% of the votes. Yesterday he acknowledged that his party maintains contacts with the Jobbik to present joint candidacies to the local elections (Photo: Orange Files).

One wonders what position the European left will adopt in the face of these contacts. The Spanish partners of the LMP are the far-leftists of Equo and ICV, both electoral partners of Podemos. The leader of Podemos, Pablo Iglesias, launched an “antifascist warning” against the liberal-conservative party Vox after achieving 12 deputies in the regional elections and Andalusia in December 2018. The leader of Vox, Santiago Abascal, has shown affinity to Viktor Orbán. In fact, both Vox and Orbán consider themselves friends of Israel. In addition, Vox and Orbán have shown their support for Donald Trump. Both are far from the anti-Semitism and anti-Americanism of the extreme left and the neo-Nazi movements. Will the Spanish left continue to boast of anti-fascism while its Hungarian franchises flirt with the Jobbik? Remember that the Greek communists of Syriza, allies of Podemos, have ruled with the antisemites of ANEL, a party similar to the Jobbik: an alliance that no leftist media questioned. Do racists cease to be so when they ally with the left?

Main photo: Members of the New Hungarian Guard in a Jobbik assembly in March 2014. Although the Hungarian Guard was outlawed in 2009, it has continued to act under other denominations (Photo: Orange Files).