Poland 1970: when a communist dictatorship sent tanks to massacre a workers' protest

In free countries, the left asserts that it is absurd for workers to vote for the right. And could it be that these workers know what happened under communism?

Lenin himself urged the execution of "a large number of strikers"

In all communist dictatorships, strikes have been illegal. They remain so in those that still endure. Workers' protests have been brutally repressed in some of these dictatorships. I have already explained here that in 1920 Lenin called for the execution of "a large number of strikers for the crime of sabotage" in the Urals. A year earlier, on the occasion of a strike at the Putilov factory, the Bolshevik dictatorship arrested 900 workers and executed 200 of them without trial. It is estimated that thousands of workers were executed for participating in strikes in the USSR already only during the Lenin dictatorship.

The workers' protests of December 1970 in Poland

Today marks the 50th anniversary of the beginning of a wave of workers' protests known in Poland as Grudzień 1970 (December 1970), due to the rise in food prices just before the start of shopping for the festivities of the Christmas. Prices were set by the state, and "the public was officially informed about the increase only the night before its introduction, when stores across the country were already closed, so that no one could buy stocks of goods at the previous prices plus low", the National Institute of Remembrance (IPN) says. "Of course, the mass of society was aware that, as it was officially called, the 'price-fixing operation' mainly affected lower-income families." 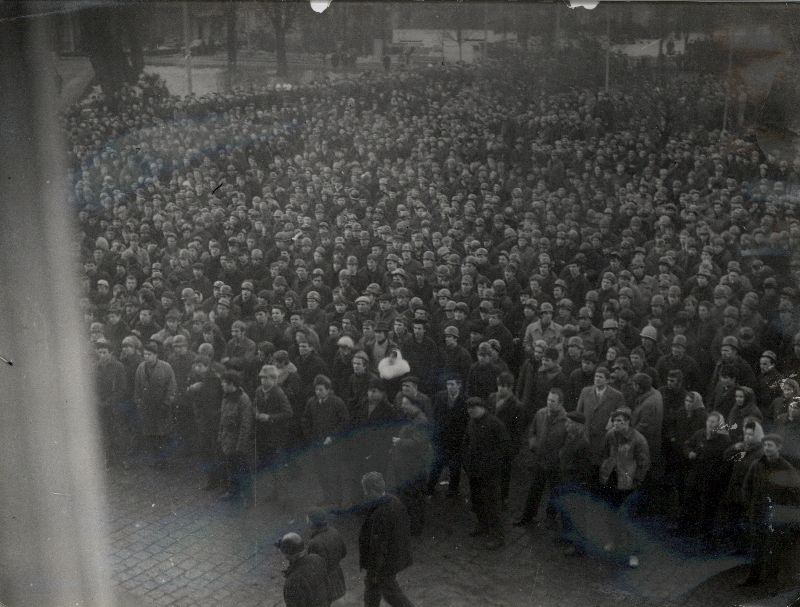 The December 1970 protests in Poland began at the Lenin Shipyard in Gdańsk on December 14. In the image, the workers in front of the shipyard's administration building, shortly before the first demonstration of these protests began (Photo: Instytut Pamięci Narodowej).

Before this "price setting" was announced, according to the IPN, "in many households it was already difficult to make ends meet." The first of the protests took place on December 14, 1970 at the Lenin Shipyard in Gdańsk, where ten years later the Catholic union Solidarność would appear. There a workers' march began with the direction of the Provincial Committee of the Polish Unified Workers Party, the single party of the communist dictatorship.

Along the way, many young people joined the march. The demonstration lasted five hours and proceeded peacefully. Despite this, a little before four in the afternoon, near the Błędnik Bridge, the protesters were attacked with tear gas grenades thrown by the Citizen Militia (MO), the military police of the communist regime. Thus began a wave of disturbances that lasted into the night and left dozens of injuries. 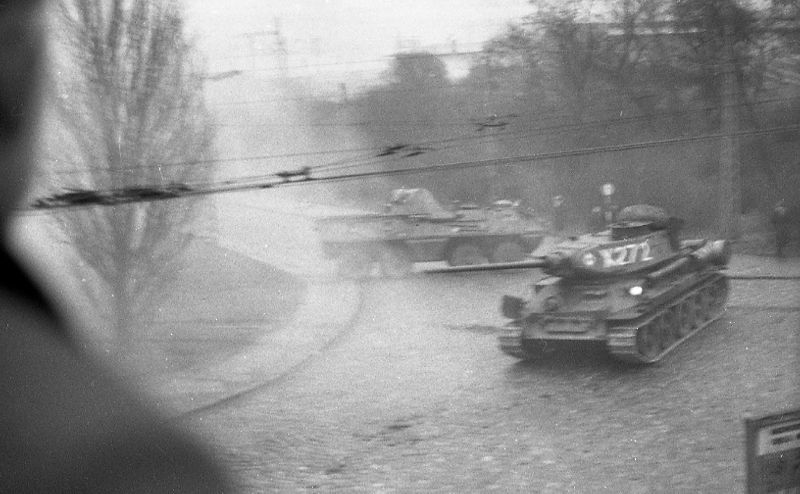 A tank and an armored vehicle of the Polish Army blocking the intersection of Czerwonych Kosynierów (now Morska), Podjazd and Śląska streets in Gdynia. The communist dictatorship used armored vehicles to suppress the protests (Photo: Instytut Pamięci Narodowej).

The communist dictatorship sent the Army with heavy weapons

After what happened in Gdańsk on December 14, the protests increased in intensity in that city. The MO again used force to repress the protesters. Despite this, the demonstration drew 20,000 people. In view of the success of the protest and the failure of the communist dictatorship to intimidate the workers, on the same day the regime sent Army forces equipped with machine guns and heavy weapons to Gdańsk. The violent repression of the protest in that coastal city that day left seven dead, several hundred injured and some 500 protesters arrested.

The following day, when the workers of the Lenin Shipyard in Gdańsk were preparing to start a new protest march, MO militiamen and soldiers fired on the demonstrators, causing two deaths and eleven injured. After this brutal repression, the dictatorship not only failed to defuse the protests, but they spread to Elbląg, Gdynia, Słupsk and Szczecin. 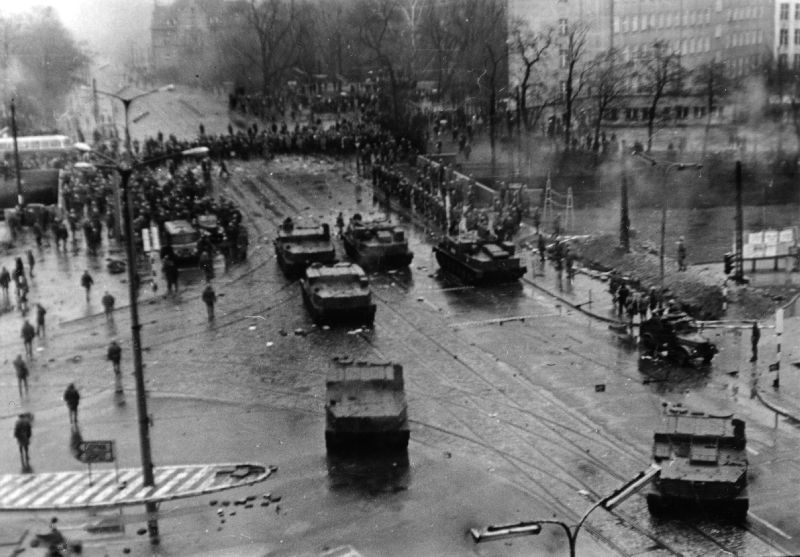 A column of armored vehicles from the Polish Army and MO militiamen blocking the intersection of Hucisko and 3 Maja streets, in Gdańsk, on December 15, 1970, on the second day of the protests. (Photo: Instytut Pamięci Narodowej).

A military man refused to shoot women and children

In Szczecin, workers from the Adolf Warski Shipyard were violently attacked by MO militiamen. That day, in that city, a crowd of 20,000 people gathered in anger outside the headquarters of the single party. Its occupants, afraid of an assault, decided to evacuate it. Colonel Henryk Ziemiański, who was inside the building, was ordered to fire on the crowd. He refused to obey, replying, "Who the hell am I going to shoot? There are women and children."

The funeral march with the corpse of Zbigniew Godlewski in Gdynia

In Gdynia, where the protests had raged peacefully, on December 17 the MO and the Army opened fire on defenseless people on their way to work, killing 18 of them. Following the massacre, there was a funeral march of protesters carrying the body of a murdered young man, Zbigniew Godlewski, only 18 years old, along with two bloodstained Polish flags. The image became a symbol of these protests. 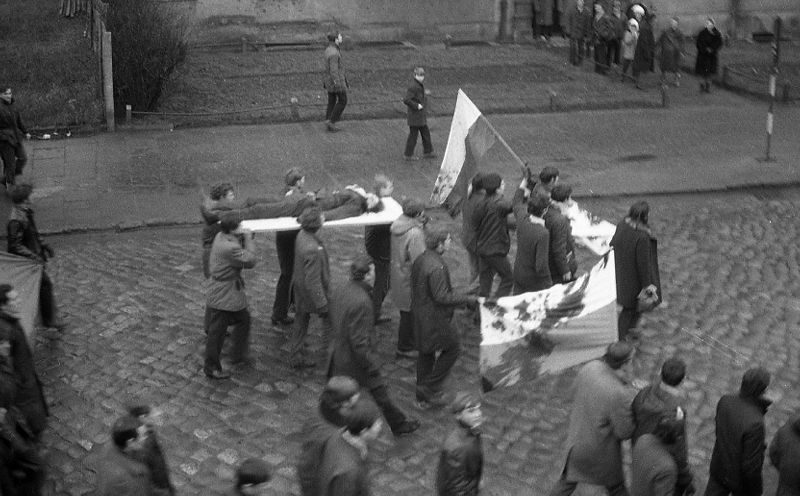 A march of citizens on Czerwonych Kosynierów street in Gdynia on December 17, 1970, carrying the body of the young Zbigniew Godlewski, 18, killed by the communists during the brutal repression of protests in that city. The protesters carried two bloodstained Polish flags. This funeral procession became one of the most famous images of these protests (Photo: Instytut Pamięci Narodowej).

The means used by the communist dictatorship to suppress protests

In addition to the aforementioned coastal cities, the protests ended up also spreading to inland cities, such as Krakow, Wałbrzych and Białystok. Tens of thousands of Poles participated in these demonstrations. In several cities the headquarters of the single party were attacked. The most striking figures are those of the media used by the communist dictatorship to suppress the protest, according to the IPN:

Apart from martial law in 1981, "never in peacetime has the Polish Army been put into combat readiness on such a scale and has not been used to such an extent to ensure public order," the IPN notes. In total, this Institute puts the victims of the brutal communist repression at 45 dead and 1,165 injured. In view of these facts, and returning to what I pointed out at the beginning of the entry, the strange thing is not that there are workers who vote for the right. The absurdity is that there are still workers who continue to vote for communist parties.