The ’13 de Marzo’: the murder of 11 children and 30 men and women by Cuban communism

If all communist dictatorships have something in common, it is that many people have risked their lives trying to flee from them in search of Freedom.

Cuba: a dictatorship in which the Caribbean Sea played the role of the Berlin Wall

The case of those who tried to flee – and some succeeded – through the Berlin Wall or over the border wall that divided free Germany from communist Germany is well known. In the case of Cuba, being an island, there is a natural wall around the country that makes escape difficult: the Caribbean Sea. For decades, many Cubans have ventured into its waters trying to cross the 150 kilometers that separate the Cuban coast from Key West, Florida. This is the story of a group of those Cubans who wanted to flee from communist oppression. 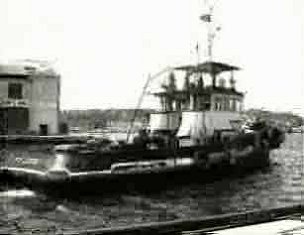 The “13 de Marzo”, the tugboat of the port of Havana used by 72 people to try to flee from Cuba. She was sunk on July 13, 1994 after being hit by three ships of the communist dictatorship that came out in pursuit (Photo: Cuba Militar).

The escape of 72 men, women and children aboard the tugboat ’13 de Marzo’

The escape began to be planned in the summer of 1993. The means of escape was to be a tugboat from the port of Havana, called “13 de Marzo”. Its former captain, Raúl Muñoz, was one of those who planned the escape, in which Fidencio Ramel Prieto, chief of operations of the port and who had the ship under his control, also took part. On July 13, 1994, 72 people, including 16 children (the youngest being only 5 months old) boarded the tugboat, setting sail some 300 meters from the Harbor Master’s Office. Unfortunately for them, the State Security Organs (OSE), the particular Gestapo of the dictatorship of Fidel Castro, already knew of their plans. 200 meters from the El Morro fortress, another tugboat began to pursue them, spraying pressurized water at them with hoses.

The brutal persecution and sinking of the ship by the communists

When the persecution began, the women and children went up to the deck of the “13 de Marzo” to make the persecutors see that if they continued with their attack they would commit a massacre, but that did not stop the communists. After a first clash between the two ships, the “13 de Marzo” went out to sea, but upon leaving the Bay of Havana, two other ships that were hidden behind the El Morro fortress joined the pursuit, firing the “13 de Marzo” with their hoses with high pressure water. 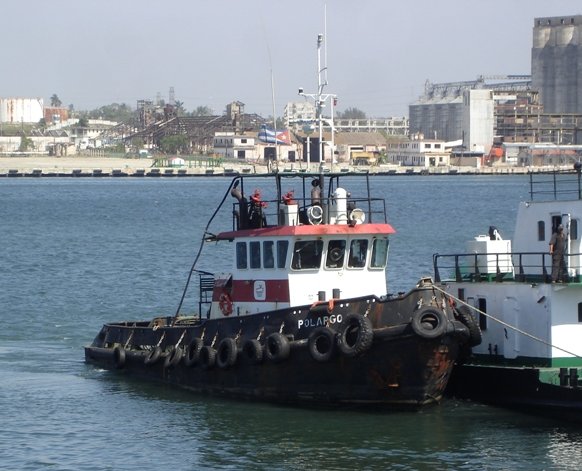 The pursuing ships began to try to drive the “13 de Marzo” away to the sea, as there were people walking along the coast who shouted at the pursuers. Everything seemed to indicate that the communists did not want witnesses for what would come next. The pursuers began to attack the “13 de Marzo”, trying to overturn the tug occupied by 72 people, initially without success, thanks to the power of the ship.

Finally, the pursuing boats managed to surround the “13 de Marzo”, damaging the tugboat and causing it to begin to sink from the stern. Despite seeing that children and women were in the tugboat, the other boats insisted on the maneuvers to sink the “13 de Marzo”, one of them trying to get on top of it to accelerate the sinking of it. It was a full-blown murder. For 40 minutes, the pursuing boats sailed at high speed around the tugboat to try to generate eddies and precipitate the sinking of it. 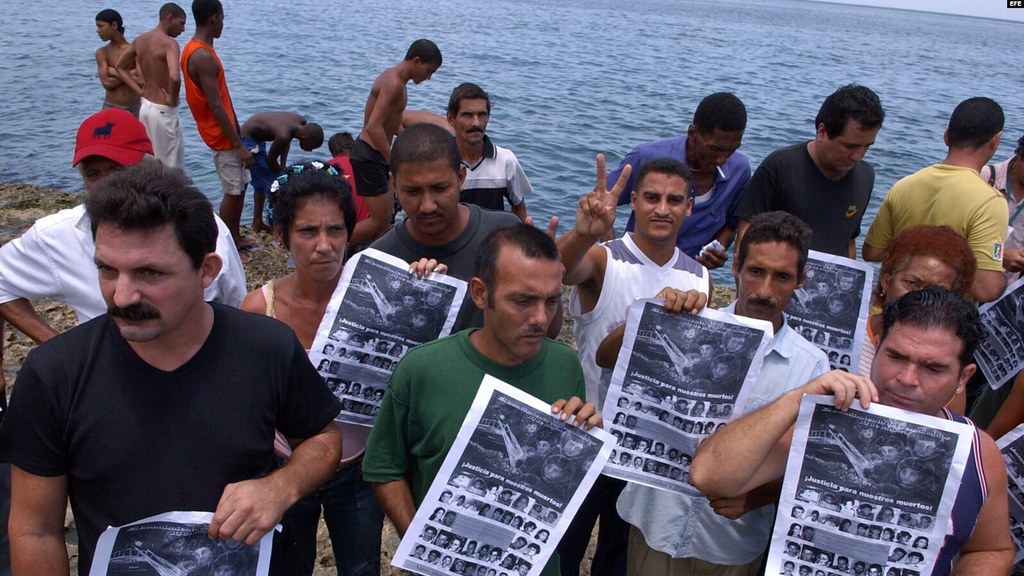 Cuban dissidents demonstrating in Cuba with photos of the children and adults killed in the massacre of the tugboat “13 de Marzo” (Photo: Radio Martí).

On the “13 de Marzo”, already half sunk, 30 people had been trapped in the hold. Finally a torpedo boat that had joined the pursuers began to rescue some of the castaways. The other three ships stopped their maneuvers. The appearance of a ship with a Greek flag heading for the port of Havana was what stopped the communists.

41 of the 72 occupants of the ship died, including 11 children

But by then it was too late. Of the 72 people who were on board the “13 de Marzo”, 41 died in that savage murder committed at sea. 11 of those killed were children between the ages of 5 months and 12 years. Of the 31 survivors, the children and women were taken home after being held for hours at the Jaimanitas Naval Base. The men were taken to the headquarters of the State Security Directorate, where they remained for 20 days, after which they were subjected to house arrest. The dictatorship did nothing to recover the bodies of the drowned. 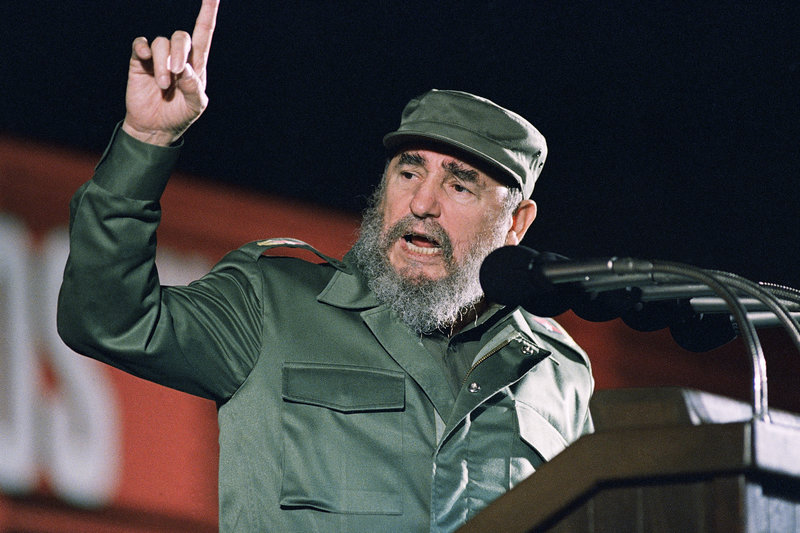 Communist dictator Fidel Castro cynically called the massacre of the tugboat “13 de Marzo” an “accident”, and at the same time praised the crew of the pursuing ships, stating that they made “a truly patriotic effort.”

Fidel Castro described the sinking as an “accident”

On August 5, 1994, in the regime’s media, dictator Fidel Castro cynically described the sinking of the “13 de Marzo” as an “accident” but at the same time affirmed that the crew of the pursuing ships made “a truly effort patriotic” when trying to prevent the escape of the tugboat occupied by 72 people. Once again, the lie became the means of a communist dictatorship to hide its crimes.

Some of the survivors attempted a new escape on August 23, 1994, jumping into the sea on a raft. In this almost, when they were 50 miles from the Cuban coast, they were rescued by United States Coast Guard vessels and carried to the US base at Guantanamo, from where a few months later they were transferred to Miami. 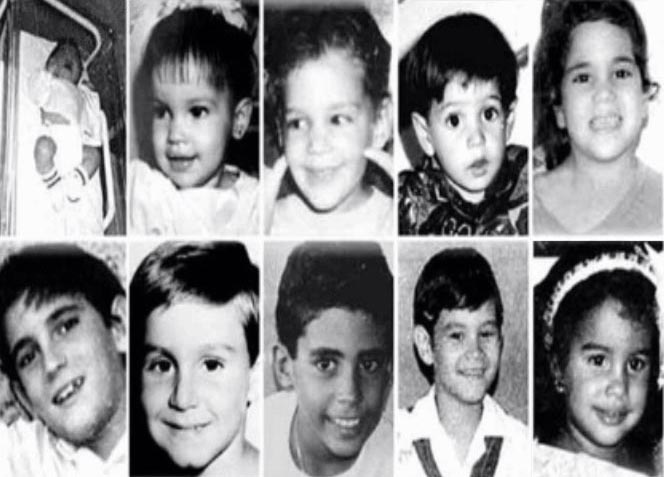 Photos of ten of the eleven children murdered in the massacre of the tugboat “13 de Marzo” on July 13, 1994. The youngest of them was only 5 months old (Source: Cuba Militar).

These are the names of the children killed in the sinking of the “13 de Marzo”: 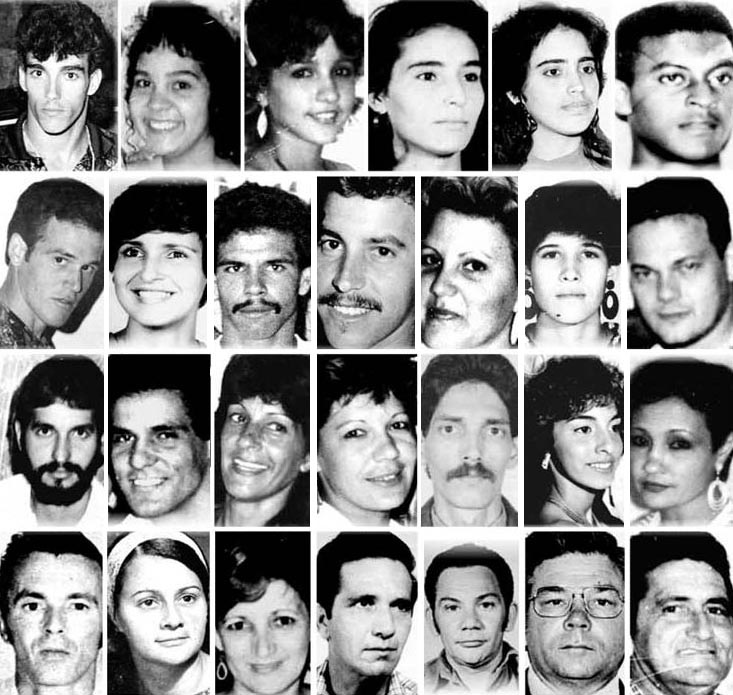 Photos of men and women killed in the massacre of the tugboat “13 de Marzo”. To this day, several of the dead remain unidentified (Source: Cuba Militar).

Here are the names of the murdered men and women:

Three of the deceased could not be identified, so their names are unknown to this day. This post is dedicated to the 41 murdered people. May God have them with him and may Cuba soon have Liberty again.