A forgotten fact about Auschwitz: most of its first prisoners were Catholics

On June 14, 1940, its first 728 prisoners arrived at the Auschwitz concentration camp. All of them were men of Polish nationality.

Undoubtedly, the Jewish people were the main victims of the Holocaust. Against them was directed, mainly, the criminal hatred unleashed by nazism. There were also other very significant groups of victims, and one of the most ignored, despite its importance, was that of ethnic Poles, mostly Catholic and considered by the Nazis as “subhuman.” Nazism directed a hatred against them almost as atrocious as it did towards the Jews. Suffice it to note that the Germans killed between 5.47 and 5.67 million Poles in World War II; of them, two and a half million were ethnic Poles. 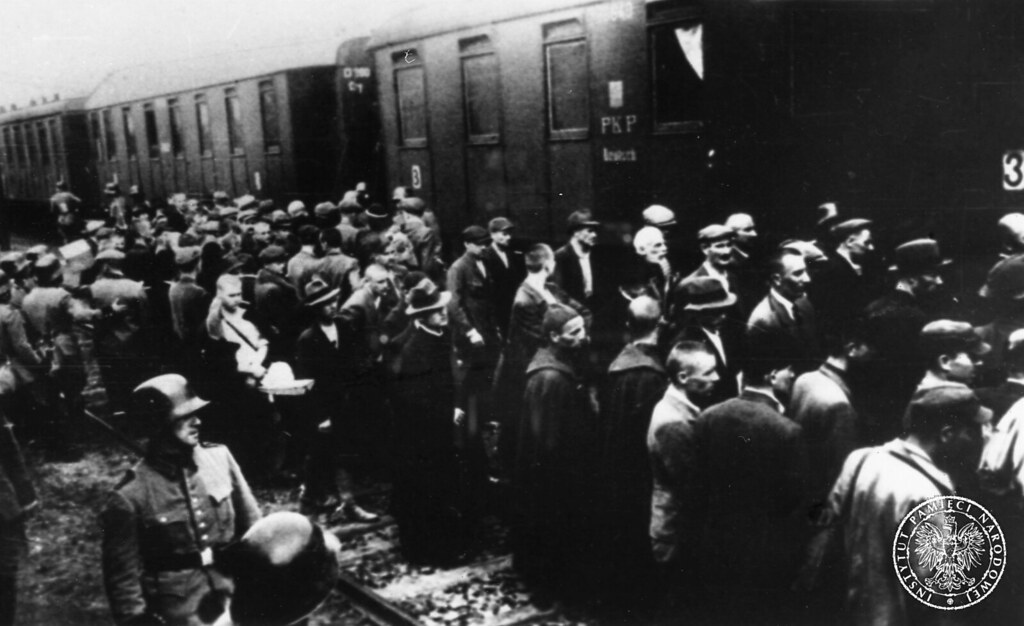 The shipment of the first 728 deported prisoners to Auschwitz at the Tarnów station, from whose prison they came. They were entirely Polish men, mostly Catholic (Source: Instytut Pamięci Narodowej).

Most of the first 728 Auschwitz prisoners were Catholics

One of the most forgotten facts about those first Auschwitz prisoners, transferred from Tarnów prison, is that the majority of the 728 were ethnic Poles, mainly Catholics. According to the Auschwitz Memorial, there were also at least eleven Jews among them. Many of those 728 were young students – a part of them belonged to the Scout movement – and also soldiers from the September 1939 campaign. Among them were many who were captured when they tried to flee from Poland to Slovakia, which is why the Germans told them they called “tourists” and “border men.” All of them wore the red triangle that identified them as political prisoners and the letter “P” that identified them as Poles. 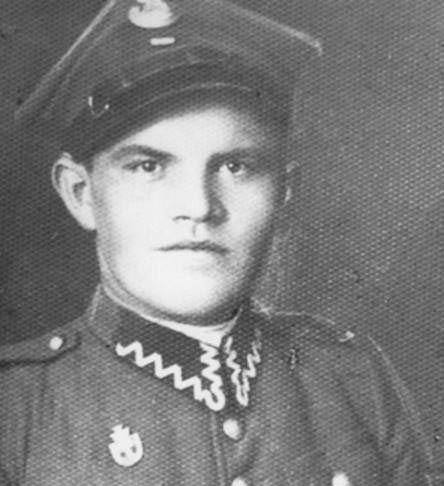 The shoemaker Tadeusz Wiejowski, tattooed with the number 220 and an ethnic Pole, was the first prisoner to escape from Auschwitz on July 6, 1940. Here we see him in the uniform of the Polish Army.

Tadeusz Wiejowski, the first prisoner to escape from Auschwitz

Among those 728 prisoners, too, were many members of the early Polish resistance organizations, activated shortly after the Germans and Soviets completed the invasion of Poland. There were also Catholic priests, athletes, lawyers, teachers, doctors, musicians… Also a shoemaker, Tadeusz Wiejowski, prisoner number 220 and an ethnic Pole who on July 6, 1940 became the first prisoner to escape from Auschwitz. Of the 1.3 million prisoners held at Auschwitz, only 150 managed to escape. Wiejowski was again captured by the Germans, being assassinated in the Jasło camp in 1941. In retaliation for his escape from Auschwitz, a Jewish prisoner, Dawid Wongczewski, was assassinated on July 7, 1940. He was the first prisoner to be assassinated in that camp.

Those 728 prisoners were registered with the numbers from 31 to 758, as the first 30 were reserved for German “kapos”, criminals who were designated as trusted prisoners, with the mission of monitoring – and often mistreating – the other prisoners. Number 31, the first of the registered Polish prisoners, was Stanisław Ryniak, a 24-year-old who was captured by the Germans in Sanok for being a member of the Polish resistance. He managed to survive and passed away on February 13, 2004. 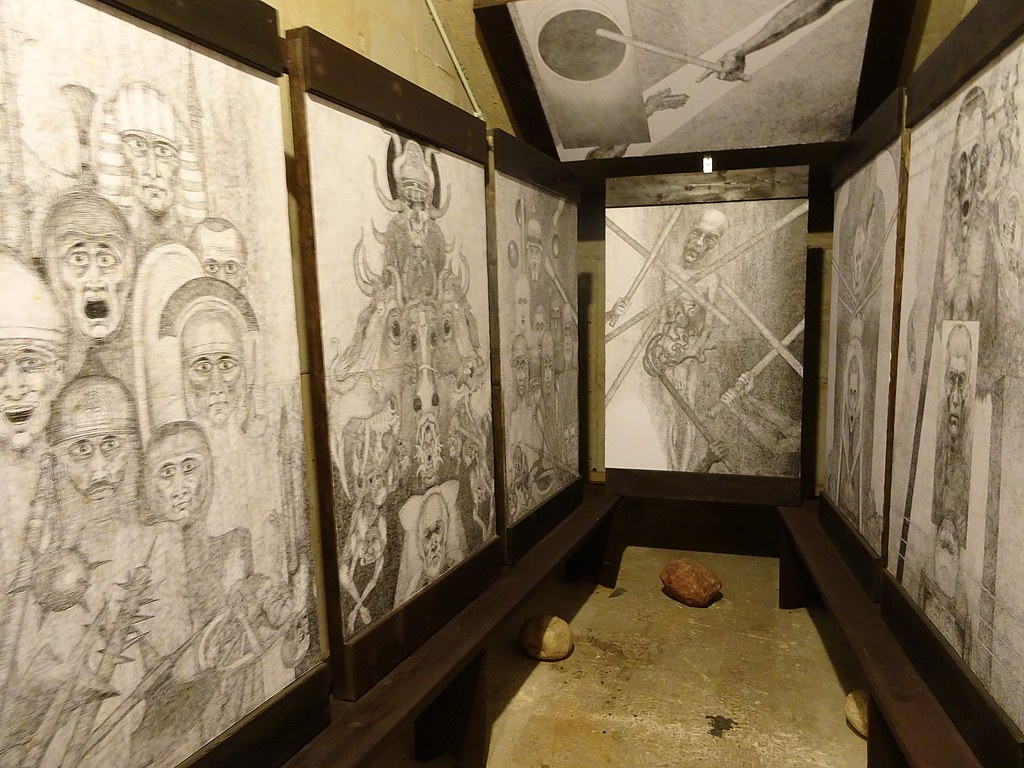 Illustrations on Auschwitz by the Polish artist Marian Kołodziej, one of the survivors of those 728 first prisoners of the camp. The illustrations are on display today in the Franciscan Convent of Harmęże, near Oświęcim (Source: Media Wnet).

Of those 728 first prisoners, 298 survived, 272 were killed and the fate of 158 is unknown, according to data published by the Auschwitz Memorial. The last to die of the survivors of those 728 first prisoners was Kazimierz Albin, tattooed with the number 118. He was captured by the Germans in January 1940 when he tried to flee to Slovakia to join the Polish Army that was forming in France. He managed to escape from Auschwitz on February 27, 1943, joining the Polish resistance, specifically Armia Krajowa. He passed away on July 22, 2019. 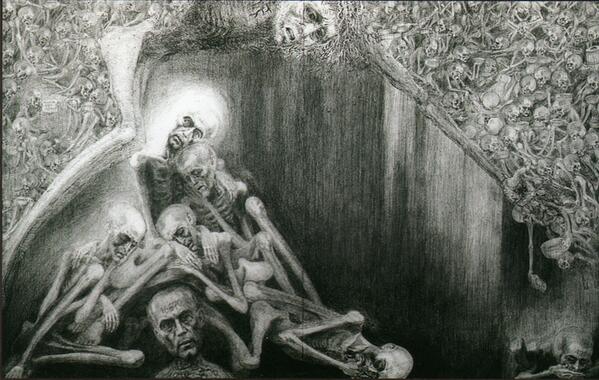 One of Marian Kołodziej’s illustrations of Auschwitz. The illustration shows Christ in the cell in which Saint Maximilian Kolbe, a Polish Franciscan friar, spent his last days before being assassinated in that camp.

One of those first 728 prisoners of Auschwitz was the artist Marian Kołodziej, tattooed with the number 432 and who survived the Holocaust (he died on October 13, 2009 in Gdansk). He was the designer of the altars used by Pope Saint John Paul II on his visits to Poland in 1987 and 1999. In his last years of life he made a series of illustrations about his experience at Auschwitz, which can be seen today in a permanent exhibition in the Franciscan Convent of Harmęże, near Oświęcim (where that death camp was built). This morning a mass was celebrated there in honor of those first deportees to Auschwitz. Serve this post as a tribute to those 728 prisoners and all those who were interned in that hell.