Mateusz Morawiecki: the brutal torture that communists did him, and he did not surrender

Poland is facing, once again, some thugs who believe that this Nation is capable of giving up its Freedom through blackmail.

A Pole stoically enduring a cascade of expletives

One of the most representative images of this week has a name and surname: Mateusz Morawiecki. The Prime Minister of Poland stoically endured, and without lowering his eyes, the insults of the left and the People’s Party, in a shameful session of the European Parliament that was intended to humiliate Poland and make it bend to the attempts to impose the agenda ideological of the left over the national sovereignty of the member countries. The Polish people rejected that ideological agenda at the polls, and now Brussels is trying to impose it on them through blackmail, threatening to withdraw EU funds if they do not submit to the anti-democratic impositions of the EU. 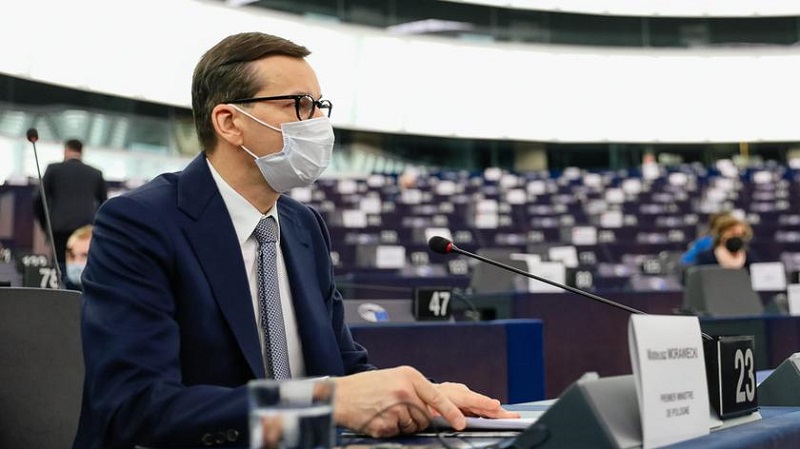 The Prime Minister of Poland, Mateusz Morawiecki, in the European Parliament last Tuesday, stoically enduring the expletives hurled at him by MEPs from the left and centrist parties (Photo: Kancelarii Prezesa Rady Ministrów).

«I reject the language of threats, hazing and coercion»

Perhaps the German Ursula von der Leyen, president of the European Commission, thought that the threats and insults would have made a dent in that shy and calm Pole, whose mood is so far from what one expects from a politician. It was not so. Mateusz Morawiecki made a calm, analytical and at the same time firm speech (it can be read here in English). I quote from him the two paragraphs that best capture the character of Poland and her prime minister, and her response to the threats and blackmail from Brussels:

“I reject the language of threats, hazing and coercion. I do not agree to politicians blackmailing and threatening Poland. I do not agree blackmail to become a method of conducting policy towards a Member State. That’s not how democracies do things.

We are a proud country. Poland is one of the countries with the longest history of statehood and democracy. Three times in the 20th century, at the cost of great sacrifice, we fought for the freedom of Europe and the world. In 1920, when we saved Berlin and Paris from the Bolshevik invasion, then in 1939, when we were the first to enter into a murderous battle with Germany and the Third Reich, which had an impact on the fate of the war and finally, in 1980, when “Solidarity” gave hope for the overthrow of another totalitarianism – the cruel communist system.“

He made a fool of politicians who tried to lynch him

In his speech, Morawiecki cited judicial decisions that prioritize national law over community law. And he added: “I can see the agitation on your faces, I understand that you disagree with it, at least in part, in this Chamber. But I do not understand why. Because these quotations come from decisions of the French Constitutional Council, the Danish Supreme Court, the German Federal Constitutional Court. I omitted the quotations from the Italian and Spanish court.” 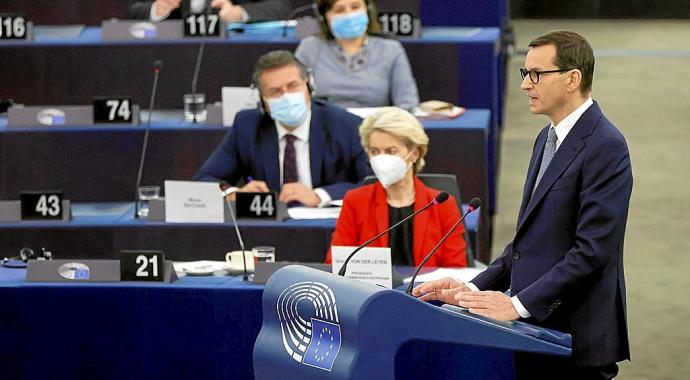 Mateusz Morawiecki in his speech to the European Parliament on Tuesday (Photo: Efe).

That fabulous reply should have embarrassed those who harass Poland, because it made it clear that they were applying a very evident double standard (I already commented here that nine other European countries have handed down sentences in this regard, and the most Germany: 19 times). However, the blackmail continued on Thursday. Those who attack Poland do so believing that having power proves them right even if they are not, and that Poland and its government will yield to pressure and blackmail. Maybe they don’t know what kind of people and what kind of ruler they are dealing with.

His father was a prominent figure in the anti-communist resistance

Last night, on the Spanish channel El Toro TV, the Polish journalist Małgorzata Wołczyk recounted an experience of the Polish prime minister that I think can give an idea of his character. Mateusz Morawiecki is the son of Kornel Morawiecki, a leading figure in the Polish resistance against communism. Kornel was the founder and leader of Solidarność Walcząca (SW, Fighting Solidarity), an underground anti-communist organization created in 1982 after the outlawing of the Catholic union Solidarność during the time of Martial Law (1981-1983). SW became an important organization that came to support the anti-communist resistance in Lithuania, Czechoslovakia, Hungary, Russia, Belarus, Ukraine and Georgia. 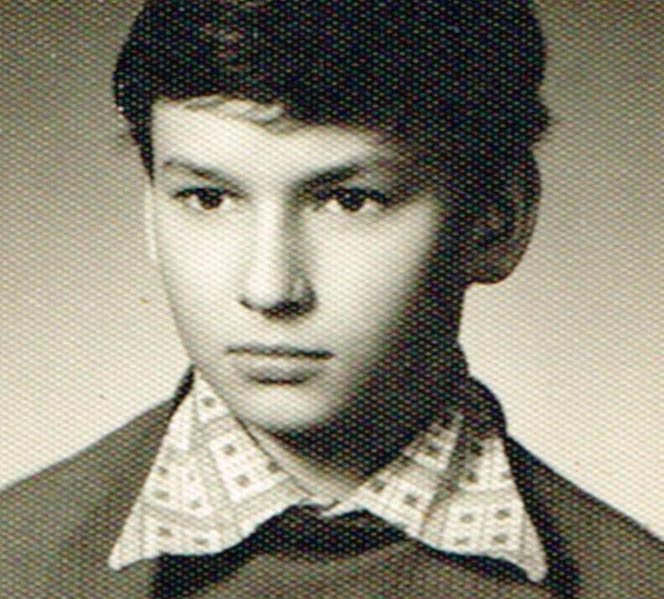 At the age of 15, the communists gave him a brutal beating and made him dig his own grave

The secret police of the communist dictatorship tried to blackmail Kornel several times, attacking his family. Mateusz, born in 1968, was very young at the time, but he soon started collaborating in the SW activity, putting up posters, doing graffiti and printing lampoons. In January 2018, Anna Dąbrowska published an article on Polityka.pl in which she recounted what happened to Mateusz in 1983:

“As a 15-year-old he went to the cathedral for mass for his homeland. After leaving, the police asked him for his name and when they heard “Morawiecki”, they pulled him into a police car. At the urging of his sister, he described this incident in the “Dolnośląski Bulletin”. We got to this account, here is its fragment: “Two were holding me by the hands and feet, and one was hitting me with a club. 3 times in the ass and thighs, alternately, until each of the three fought at me. (…) They ordered me to get up. I got up. Suddenly, the youngest one hit me with his fist on the face, the other one in the stomach … and I fell. They kicked me twice in the back and, laughing, commanded “baczność” [order to stand in the Polish Army]. I did not have the strength to do it. They said they would teach me what an order meant. They put me on my feet and the youngest punched me on the nose again – blood flew, then on my mouth – he broke my lip. The bastard was strong! In the end, they kicked me out of there and said goodbye with curses.””

Anna Dąbrowska explains that Mateusz signed that story with the pseudonym “Dziki” (Wild), as his older sisters used to call him, since as a child he was a bit of a mess (who would say it today seeing how formal and calm he seems). Dąbrowska added: “He was subsequently arrested and beaten a few more times, made to dig a grave for himself in the forest and threatened to rape his younger sister.“ An anti-communist opposition activist, Wojciech Myślecki, stated in 2017 that the police of the communist dictatorship threatened to kill Mateusz if he did not reveal where his father was hiding: “They even ordered him to dig his own grave.” Anna, Mateusz’s sister, remembers: “Then he was badly beaten, he returned home all bruised and his fingerprints stayed with him for a long time.“ 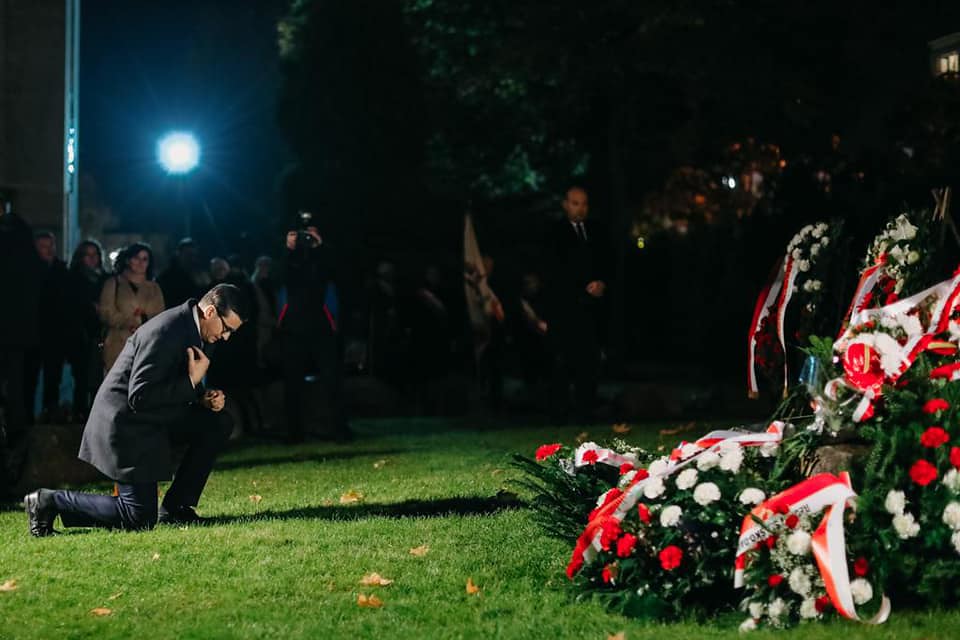 The political lynching against Mateusz Morawiecki took place on the anniversary of the murder of the Polish priest Jerzy Popiełuszko at the hands of the communists in 1984. That night, after returning to his homeland, the Polish prime minister, a fervent Catholic, went to pay tribute to the Catholic martyr: “I have said many times how important it is for Poland, but also for my family, the figure of Father Jerzy Popiełuszko. He could not miss today, on the anniversary of his death, in his grave in the St. Stanislaus Kostka Church in Warsaw. Blessed Father Jerzy, pray for us all” (Photo: Mateusz Morawiecki).

Others would have given up then: Mateusz didn’t give up

Anyone else, only 15 years old, would have been overcome by fear and would have surrendered to threats. But, showing the same courage as his father, Mateusz did not give up: he continued collaborating with SW, and also being the best candidate of 1987 at the University of Wroclaw, obtaining 94 points out of 100. He graduated in History in 1992, already after the fall of communism.

I wonder if last Tuesday, when Mateusz stoically endured that rain of expletives in the European Parliament – some launched by Communist MEPs -, those who attacked him knew that they were trying to intimidate a 53-year-old man who at 15 endured a brutal beating from the Communists, who made him dig his own grave with the intention of intimidating him, who threatened to rape his younger sister and who lived part of his childhood with his father persecuted and hidden, but who never gave up and continued fighting. The European left and its accomplices in the Popular Party have come across a tough nut to crack. 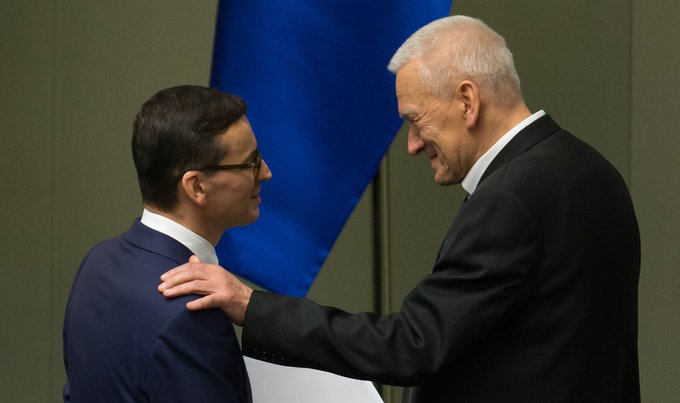 They try to scare the Poles with a Blitzkrieg of bureaucrats

The Polish people are also a tough nut to crack. At the Battle of Wizna, in 1939, 700 Polish soldiers managed to stop an attack by 42,000 Germans for three days, in an episode that today is remembered as the Polish Thermopylae. Likewise, Poland was one of the few countries occupied by the Nazis that did not surrender and continued to fight. The Polish resistance was already formed in 1939, and Polish soldiers fought in Norway, France, defending the skies of the United Kingdom, in North Africa, in Italy, Belgium, the Netherlands … being Poland one of the countries that contributed the most combatants to the Allied side and the one with the highest percentage of deaths of all the countries involved in World War II. Now others are trying to scare this noble and brave people with a Blitzkrieg of bureaucrats. How little they know the Poles.