The demonstrations called by Vox on November 27 throughout Spain have been silenced or cornered by many Spanish media.

A protest against a government betrayal of the rule of law

Last Sunday, the third most voted party in Spain called rallies in Madrid and in all the provincial capitals, managing to mobilize a crowd in the Plaza de Colón in Madrid to protest against the betrayal of the government of Pedro Sánchez to the Rule of Law, by agreeing with its separatist partners to eliminate the crime of sedition as payment for their support to continue governing for another year. A pact that implies a covert amnesty to the authors of the 2017 separatist coup in Catalonia and that would leave our democracy disarmed in the face of a new separatist coup.

Many Spanish media hid the protest or cornered it

The treatment received by this protest in many Spanish media has been embarrassing. Some hid the news on their front pages and others cornered it. By way of example, the newspaper La Razón did not even publish news about the protest (it is a medium closely related to the Popular Party, which did not support the mobilizations) and Cadena COPE published a brief news of the protest without any image (the radio station of the Spanish Episcopal Conference has acted as a propaganda organ for the Popular Party for years).

The complete chronicle of Telewizja Polska from Poland

Interestingly, in Poland Telewizja Polska (TVP) published a comprehensive chronicle of the protests, with this headline: "Manifestacje przeciwko rządowi Sancheza w całej Hiszpanii" (Demonstrations against the Sánchez government throughout Spain). The news was published on the TVP website on Sunday at 21:57 CET. The first paragraph stated the following:

"Tens of thousands of people gathered this Sunday in the center of Madrid to protest against the government of Pedro Sánchez. Demonstrations were also held in front of the town halls of all the Spanish provincial capitals. "Today, once again we are starting a great reaction in the streets. I have no doubt that we represent the social majority," said the leader of the VOX party, Santiago Abascal, in the Spanish capital."

TVP devoted seven paragraphs to the news (two more than COPE), but also included five videos and two images of the protests. 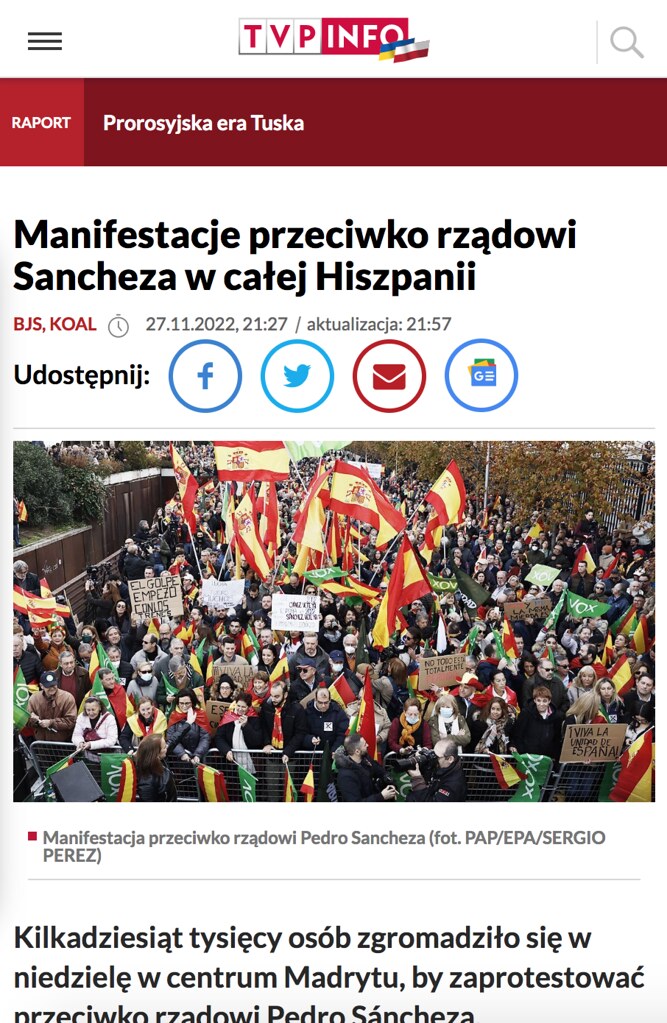 It is worth wondering if we Spaniards will have to end up learning Polish to find out what is happening in our country, given that some Spanish media decide to silence such relevant news. If learning that language is difficult for you, with Google Chrome you can visit Polish websites and easily translate them into Spanish automatically.