The fight was only going to last a few days, but they resisted two months

Warsaw 1944: when Poland rose against the Third Reich … and Stalin stand idly by

On the occasion of this anniversary, I bring you today a series of photos of that heroic deed, with which the Poles intended to take the reins of their own Nation before the imminent arrival of the Red Army in Warsaw. However, Stalin ordered his forces to stop on the eastern shore of the Vistula, and allowed the Germans to repress the Poles with blood and fire, even denying the Western Allies the possibility of sending aid from Soviet bases. What was expected to last a few days, ended up being extended more than two months, until October 2, exhausted their reserves and without food, the insurgents had to capitulate.

The Warsaw Uprising of 1944 is one of the most heroic episodes of World War II, but sadly many overlook it, perhaps because its failure resulted in the Poles going from being subjected to the Nazi yoke for five years to be subjected to the communist yoke for four decades. I dedicate this entry as a tribute to all those who fought and gave their lives to conquer the freedom of Poland, those who fought in the ranks of the Polish resistance and the thousands of civilians who were victims of German revenge. 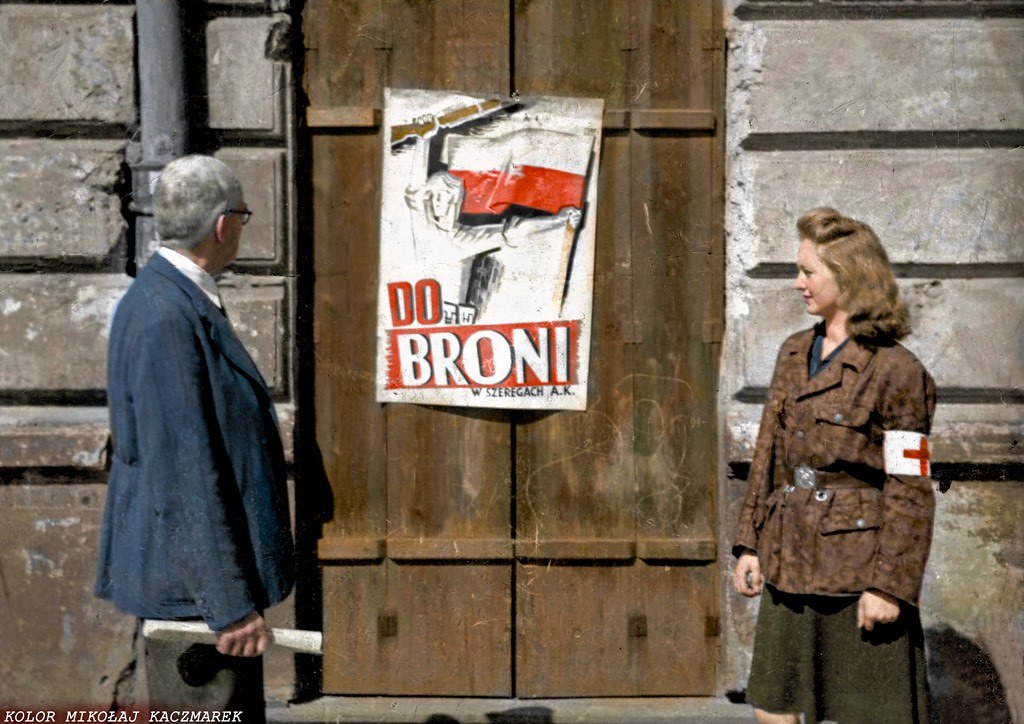 The sanitariuszka (paramedic) Janina Marisówna-Tomiak with her father, Adam Tomiak, in the Muranowski Square in the old town of Warsaw, observing a sign with the motto «Do Broni», To the armas (photo colored by Mikołaj Kaczmarek). 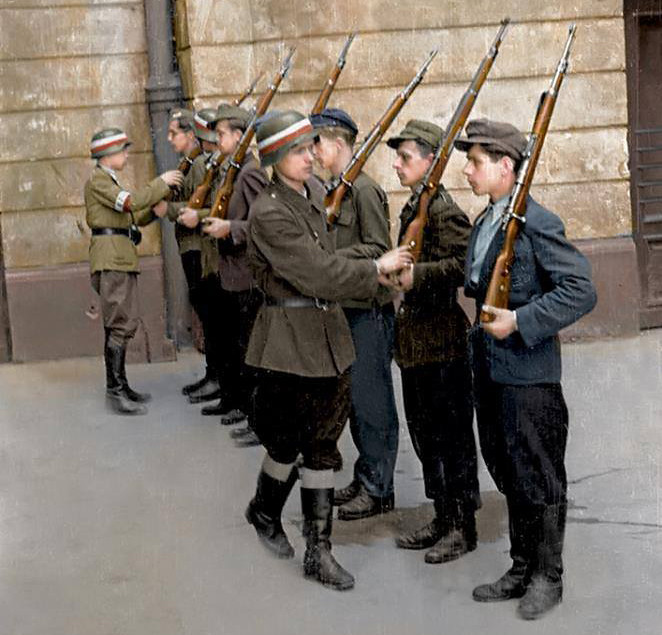 Drill of the 1st platoon of the «Koszta» Company of the Armia Krajowa, the main organization of the Polish resistance, in the courtyard of the house in Moniuszki 12 during the Warsaw Uprising of 1944. Unlike the resistance movements in others Countries occupied by Germany, the Polish resistance was organized as a true army, with a ranking and a typically military structure. The influence of the military tradition of Polish society allowed to form a clandestine movement with units of infantry, intelligence, military health, logistics and even cavalry. 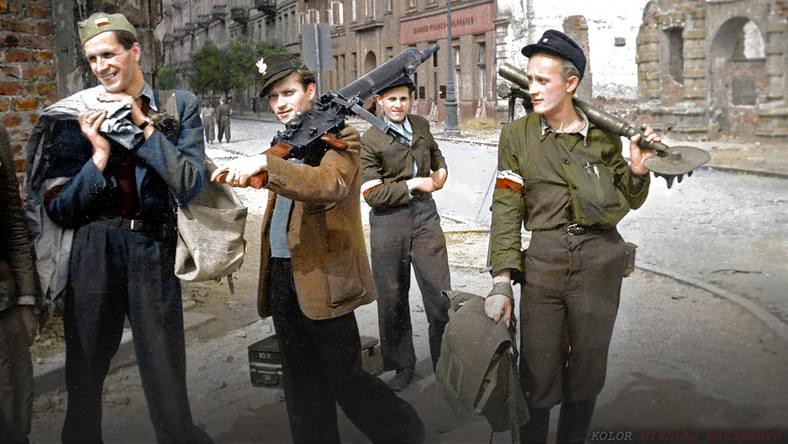 Insurgents with captured weapons at the police headquarters on Krakowskie Przedmieście Street on August 23, 1944. Members of the Polish resistance during the Uprising often wore pieces of captured German uniforms. In the photo we see two of the insurgents with German black caps. The common element that identified all the insurgents was the bracelet with the colors of the Polish flag on the right arm (although initially worn on the left). On the bracelet was printed the Polish eagle and the letters «WP» from «Wojsko Polskie», Polish Army. 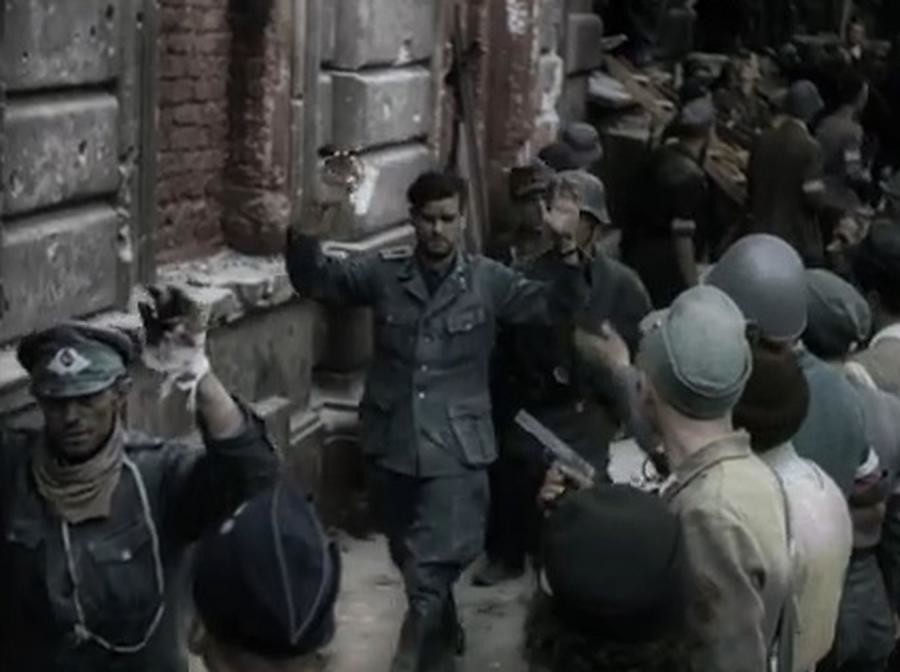 German soldiers captured by Polish insurgents. Unlike what happened during the invasion of Poland (Germans and Soviets killed many Polish prisoners of war), the Polish resistance respected the Geneva Convention, and often even had to save German prisoners from the wrath of the civilian population, which had been enduring all kinds of abuse and atrocities for years. 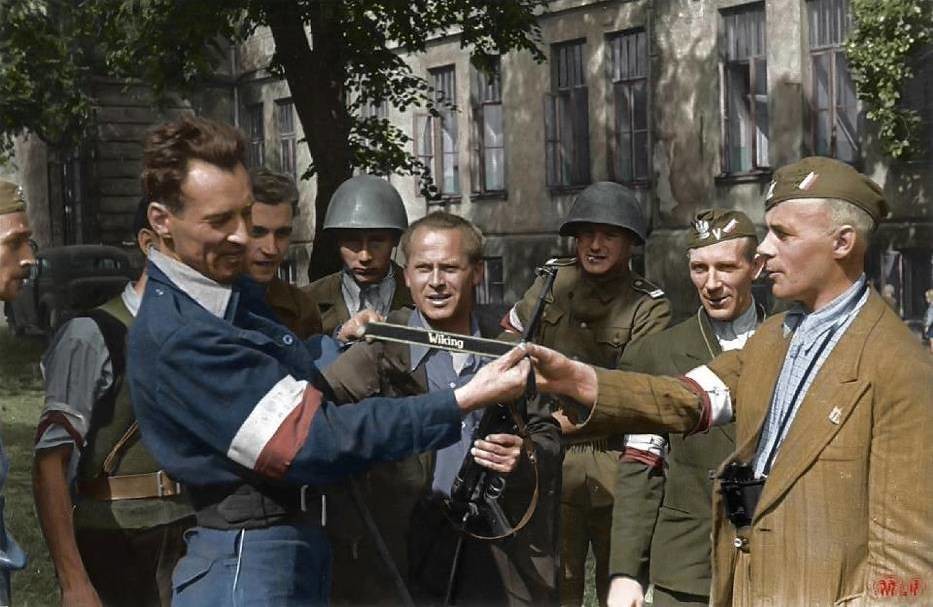 Captain Cyprian Odorkiewicz, aka «Krybar» (on the right), Wacław Jastrzębowski «Aspira» (right), and other insurgents next to the Warsaw Conservatory, on Okólnik Street, on August 14, 1944. They show a bracelet of a German soldier, specifically of a member of the 5th Panzer SS Division «Wiking». Two of the insurgents wear Soviet helmets model SSh-40. 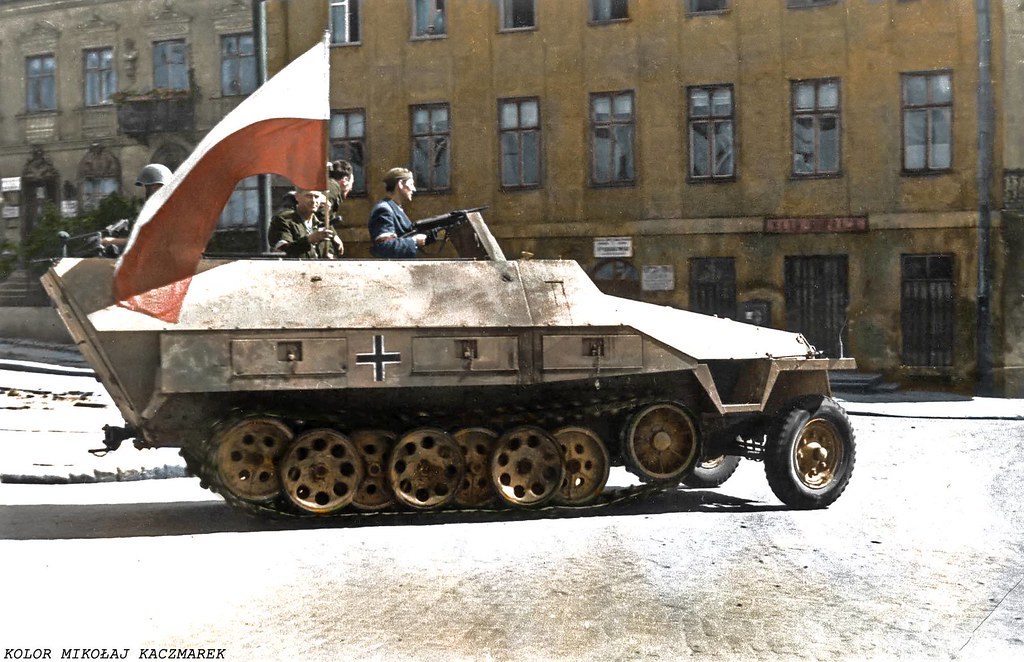 A German half-track vehicle SdKfz 251 was captured by insurgents of the «Krybar» Group of Armia Krajowa on August 14, 1944. It was nicknamed «Szary Wilk» (Gray Wolf). He had belonged to the 5th Panzer SS Division «Wiking». The AK used this vehicle in two rounds without success to the University of Warsaw, occupied by the Germans. 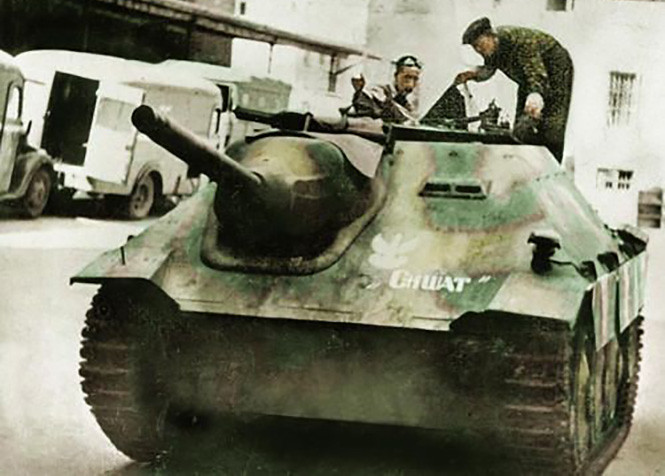 A German Hetzer tank destroyer captured by Armia Krajowa during the Warsaw Uprising. On the front of the vehicle they painted the white eagle, the national symbol of Poland. This tank destroyer was nicknamed «Chwat» by the Polish insurgents. It belonged to the 743rd Panzerjäger Battalion of the German Army and was captured on August 2, 1944. Due to the damage that the vehicle suffered during its capture, it was integrated into one of the barricades installed by the Polish resistance in Napoleon Square. He was then taken to the Post Office building, in whose vicinity this photo was taken on August 14, 1944. The destruction of that building by the Germans left the tank destroyer buried. He was unearthed after the war and taken to the Polish Army Museum. However, in 1950 the communist authorities ordered to get rid of him, perhaps because it was a symbol of a Polish resistance that was harshly repressed by Stalin. 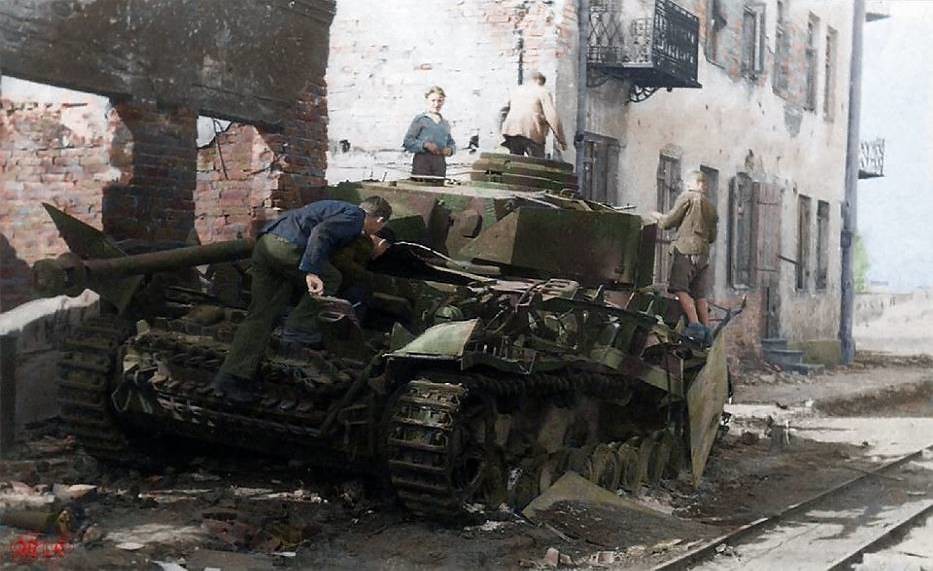 Warsaw children playing in a German tank Pz.Kpfw IV destroyed by the insurgents on Gorokhovskaya Street, on September 14, 1944 (photo colored by Mikołaj Kaczmarek). 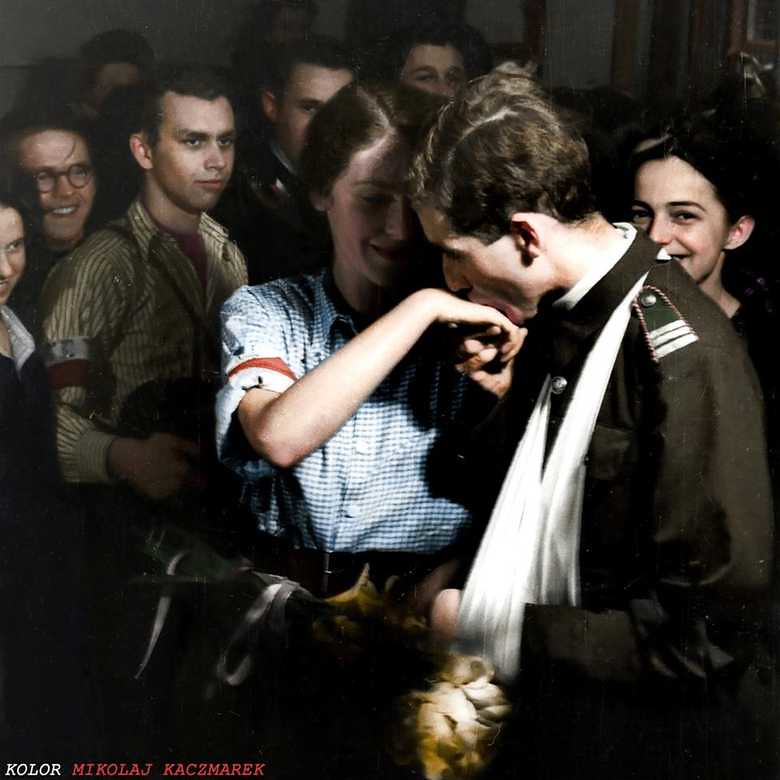 On August 13, 1944, two insurgents were married: the sanitariuszka Alicja Treutler «Kale» and the cadet Bolesław Biega «Pałąk» of the «Kiliński» Battalion of Armia Krajowa. In this photo taken by Eugeniusz Lokajski «Brok» we see the boy, with his left arm in a sling, kissing his girlfriend’s hand. The wedding was held in the chapel of Moniuszki Street and was officiated by an AK chaplain, Father Wiktor Potrzebski «Corda», who died a few weeks later, on September 4, during a German bombing. Between death and horror there was also room for love: some 500 couples of insurgents married during the Uprising. Alicja and Bolesław survived the war and had a long life together. The video that was recorded of their campaign wedding is today one of the most beautiful historical documents of the Uprising (photo colored by Mikołaj Kaczmarek). 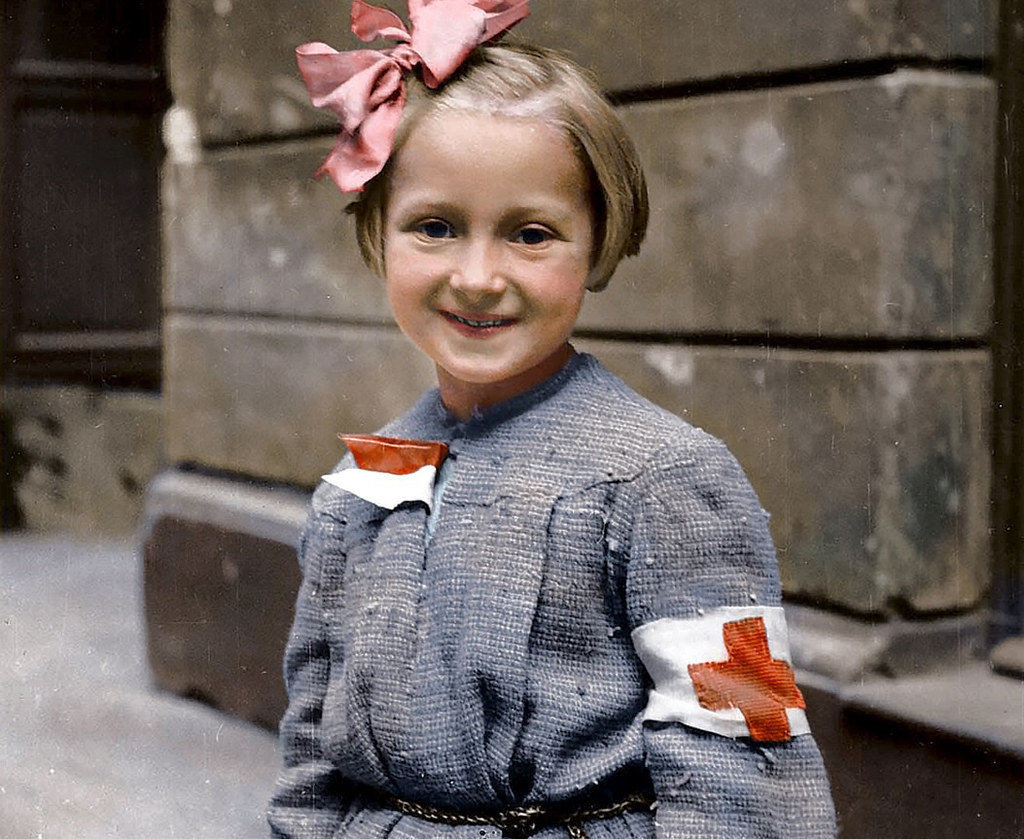 The youngest sanitariuszka of the Uprising was Róża Maria Goździewska and was 8 years old. In this photo taken by Eugeniusz Lokajski we see her smiling and with her bracelet with the red cross. She helped in the field hospital of the «Koszta» Company of Armia Krajowa in the basement at 11 Moniuszko Street, where she helped bring water to the wounded, frightening the flies – which were a plague – and offering her beautiful smile. Róża’s father had been killed by the Gestapo in 1943. After the war she went to France, where she married and had two children. She died in 1989 (photo colored by Mikołaj Kaczmarek). 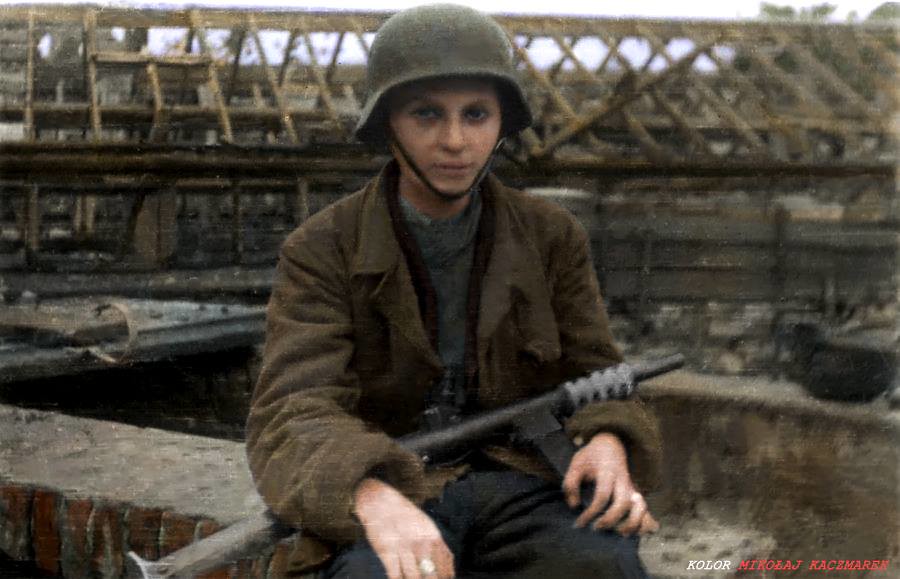 Tadeusz Rajszczak «Maszynka» was 15 years old when the Uprising began. It belonged to the «Torpedy» Squad of the «Miotła» Battalion. He fought in several areas of Warsaw, including the Wola district, where the Germans perpetrated the worst killing of those they committed in the Uprising, killing 40,000 people. Many young Poles like Tadeusz, including many members of the Scout movement, joined the Szare Szeregi (Gray Ranks) of Armia Krajowa, helping with propaganda and other auxiliary tasks. During the Uprising, many members of the Szare Szeregi also engaged in combat tasks. After the defeat of the Uprising, Tadeusz managed to leave Warsaw in the company of civilians. In 1978, he, his sister Mirosławą Rajszczak and his parents, Weronika and Feliks, were recognized by Israel as Righteous Among the Nations for helping Jews escape during the Warsaw Ghetto Uprising (photo colored by Mikołaj Kaczmarek). 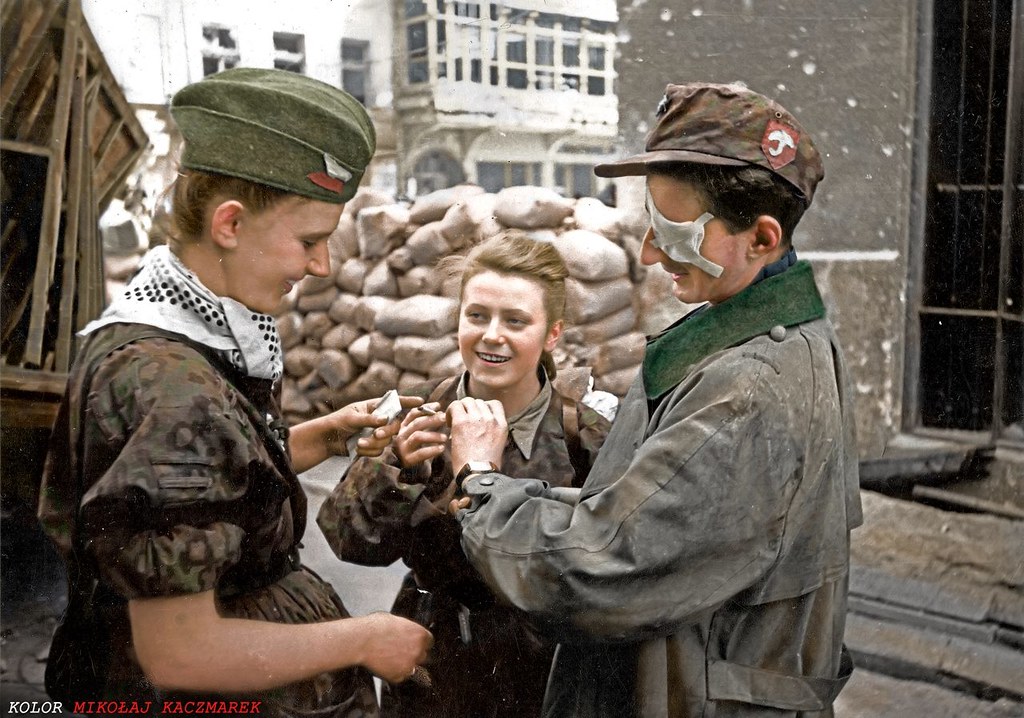 Two sanitariuszkas and a soldier from the «Parasol» Battalion of Armia Krajowa on September 1, 1944, smoking after leaving a sewer on Warecka Street. Maria Stypułkowska-Chojecka «Kama» (in the center) was 17 years old and had already participated in the defense of Poland in 1939 in the ranks of the Scout movement. During the war he participated in sabotage tasks with the Szare Szeregi and also in intelligence work. She was injured twice during the Uprising, and after the defeat she managed to leave the city in the company of civilians. He died on February 5, 2016 and was buried in the Powązki Military Cemetery in Warsaw (photo colored by Mikołaj Kaczmarek). 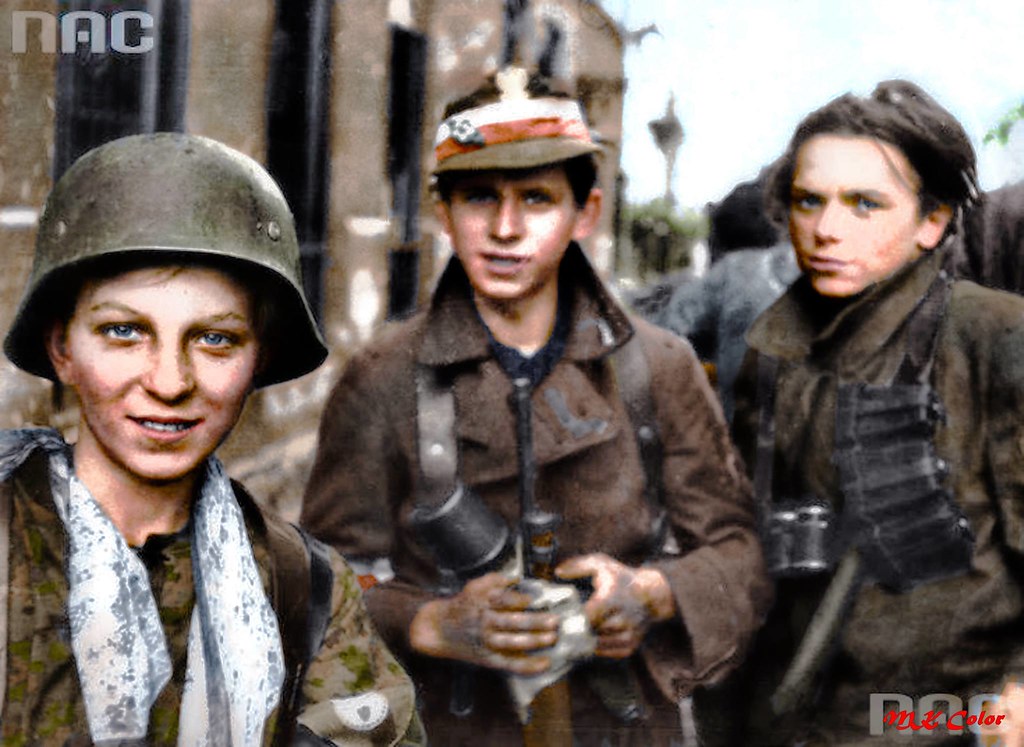 One of the most famous photos of the Uprising: three young insurgents of the Szare Szeregi, belonging to the «Miotła» Battalion of the «Radosław» Group, in a photo taken on September 2, 1944, when they had just toured the sewers that connected the Krasiński Square and Warecka Street, in the Śródmieście district. The boy with the helmet is Tadeusz Rajszczak «Maszynka» (15 years old, of which I already spoke above). The young man in the cap, in the center, is Kazimierz Gabara «Łuk» (17 years old), and the one on the right is Ryszard Michał Lach «Pestka» (17 years old). 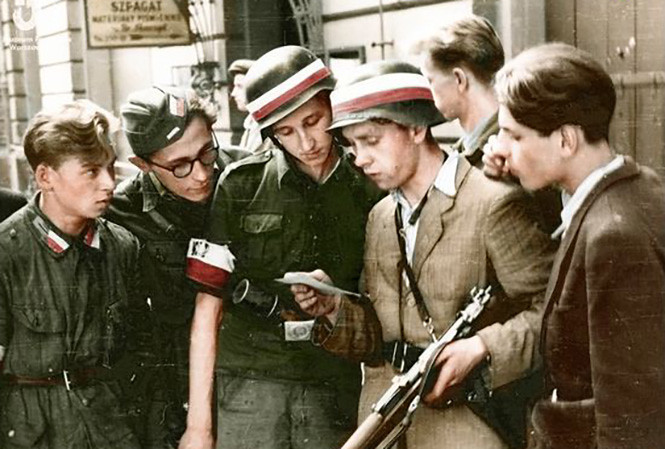 Young soldiers of the «Koszta» Company of Armia Krajowa reading a German pamphlet in which they are encouraged to surrender. Two of them wear «Polished» German helmets. 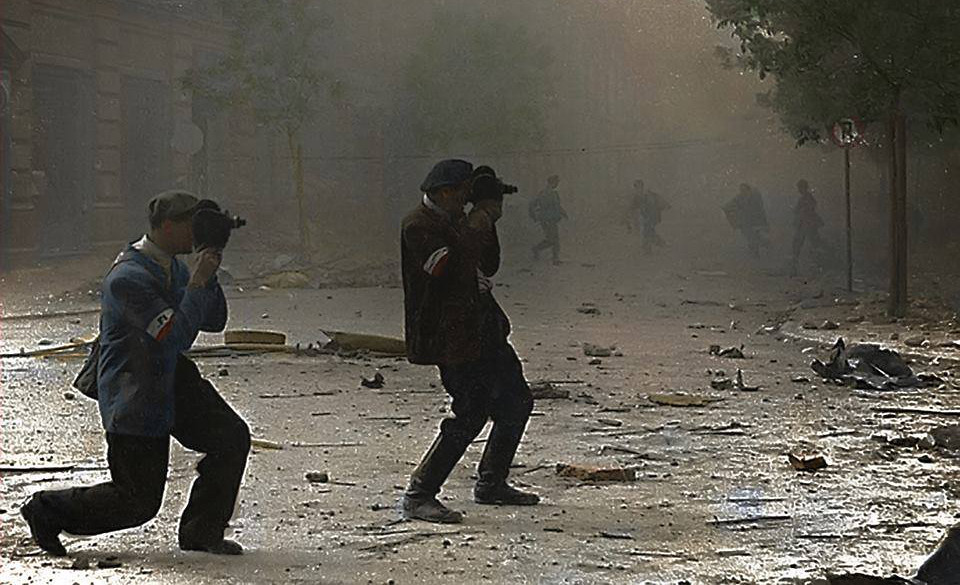 Lieutenant Stefan Bagiński (left) and sergeant Antoni Wawrzyniak (right) recording in Warsaw during the Uprising, at the intersection between Jasna and Moniuszko streets. Both were part of the Office of Information and Propaganda of Armia Krajowa. The author of the photo is Sylwester «Krisa» Braun. Thanks to reporters like them, who took numerous risks during the performance of their work, we have today the valuable photographic and cinematographic documents that exist on the Warsaw Uprising. 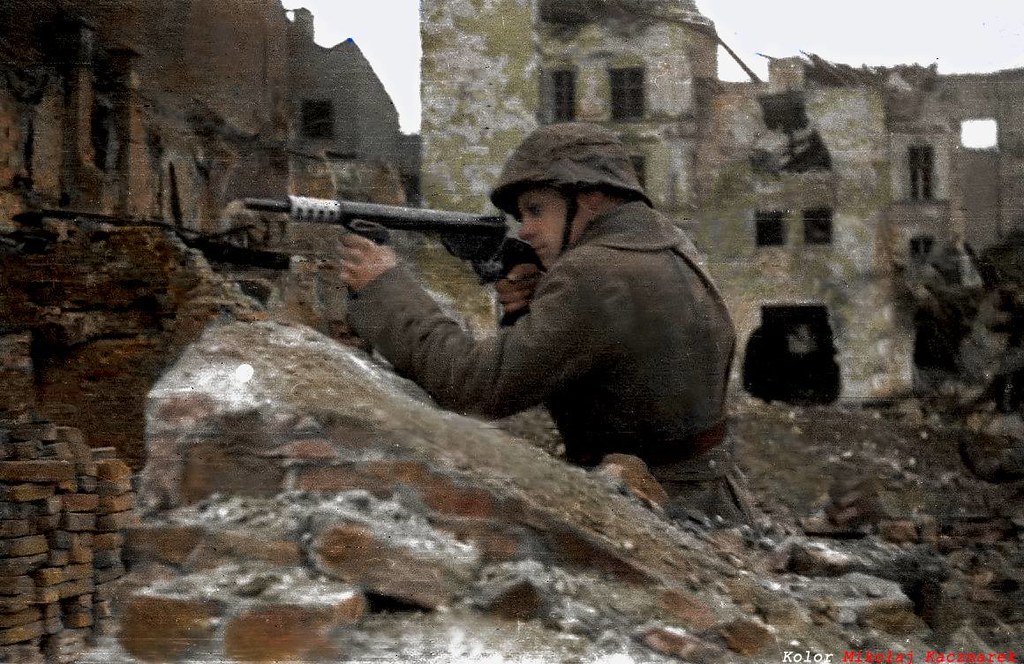 An insurgent with a Błyskawica (Lightning) submachine gun. This weapon was manufactured by Armia Krajowa from the British substender Sten. Some 700 were manufactured, being the only clandestinely produced serial weapon in all of Europe occupied by the Germans. 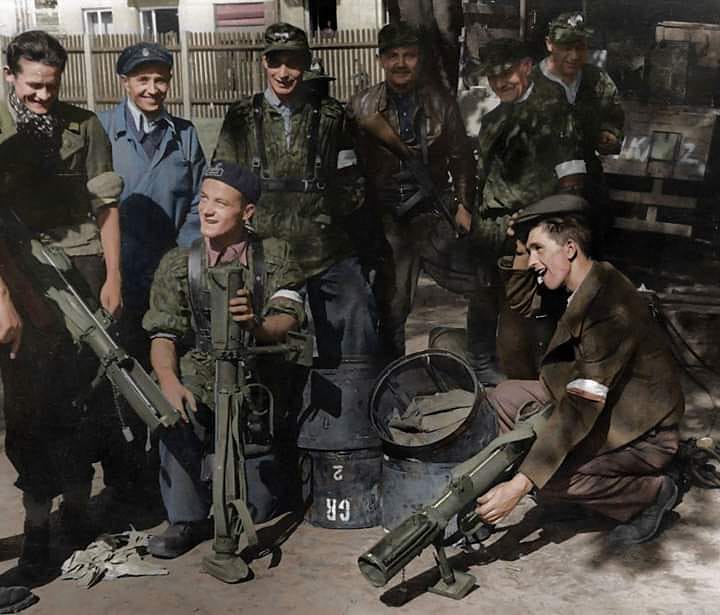 Soldiers of the «Czata» Battalion of the Armia Krajowa with PIAT anti-tank grenade launchers, in a photo taken in August 1944. The reduced aid sent by the Western Allies to the Polish resistance included light weapons, such as the STEN submachine gun and these British grenade launchers. The Allies launched this material from B-24 Liberator bombers flying from Italy. 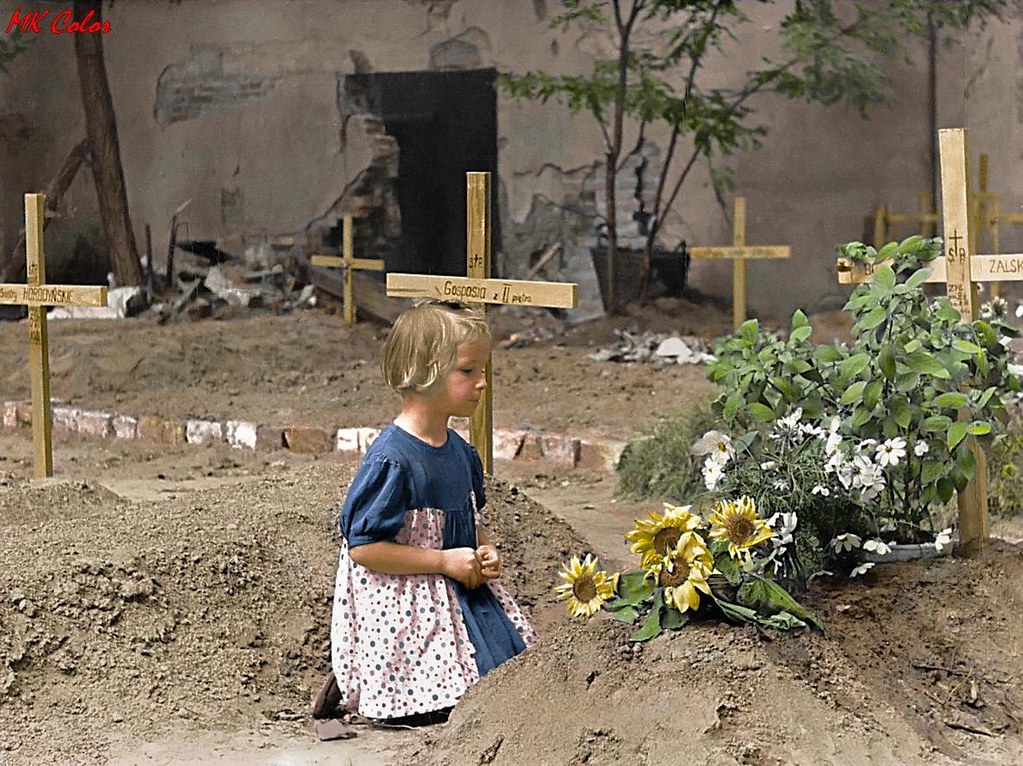 A girl kneeling before a grave on Mazowiecka Street. The image, captured by Sylwester «Kris» Braun, is one of the saddest photos of the Uprising. Many streets and squares in Warsaw became makeshift cemeteries (photo colored by Mikołaj Kaczmarek). 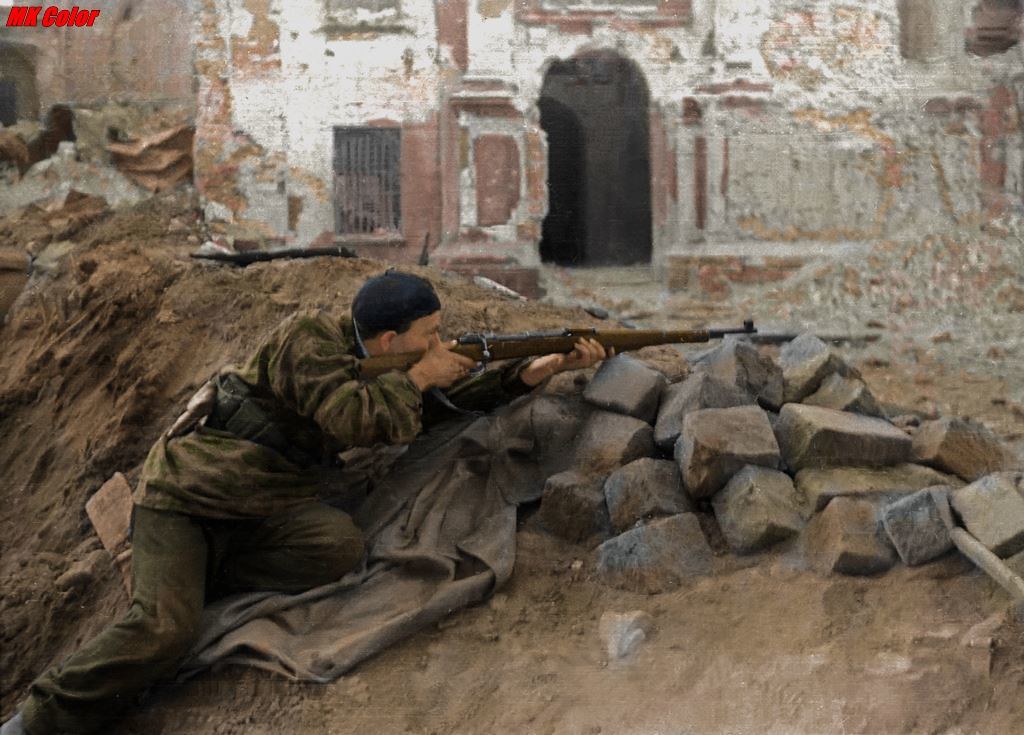 An insurgent points his Kar-98 in a trench in Długa Street, next to the Polish Army Cathedral. The photo was taken by Wiesław Chrzanowski «Wiesław». 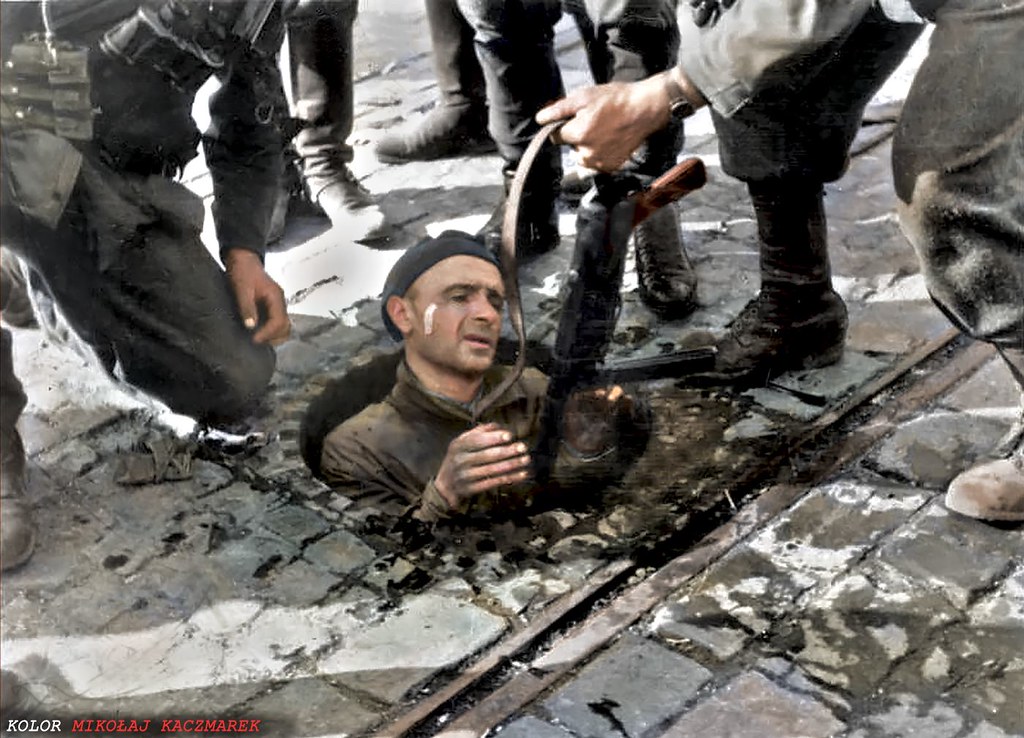 A Polish insurgent being captured by the Germans at the exit of a sewer in the Warsaw district of Mokotow, on Puławska Avenue. Members of the Polish resistance used the Warsaw sewer system to move between the different areas of the city they controlled. That is why many insurgents used to wear scarves around their neck: to cover their faces and thus withstand the harsh conditions of the sewer system (photo colored by Mikołaj Kaczmarek). 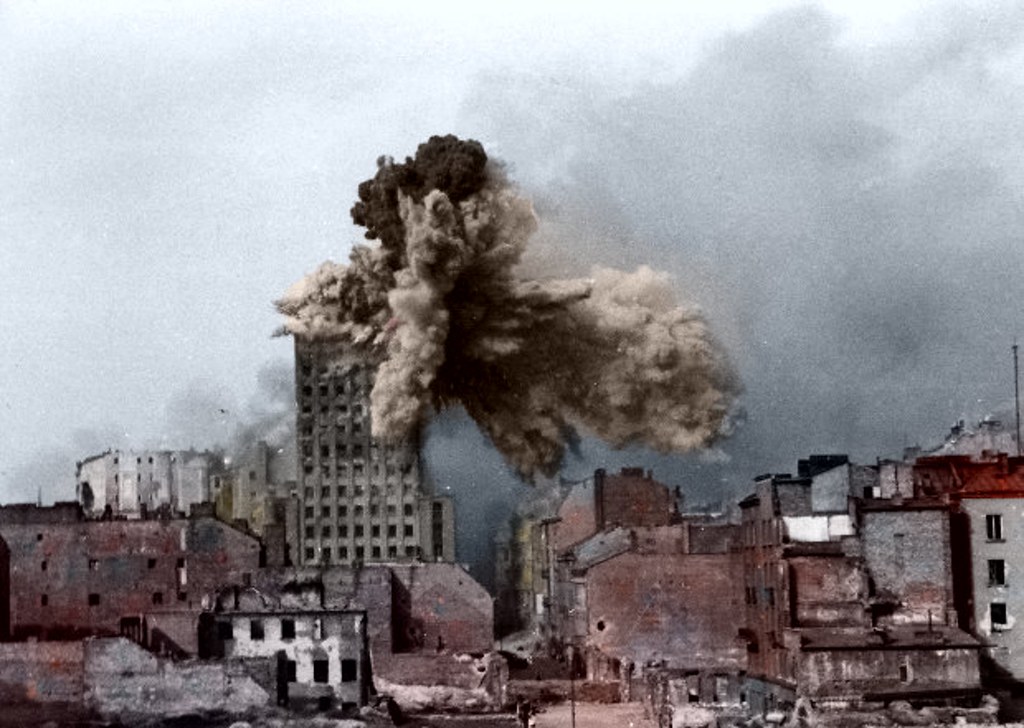 The German attack on the building of the Prudential insurance company, in Napoleon Square. At the beginning of the Uprising, this building, one of the tallest in Warsaw at that time, was taken by Polish soldiers of the «Kiliński» Battalion of the Armia Krajowa, who raised the flag of Poland on the antenna that was at the top of the skyscraper. On August 28, German artillery fiercely attacked the building. Sylwester Braun took that impressive photo of the impact of one of the German shells. 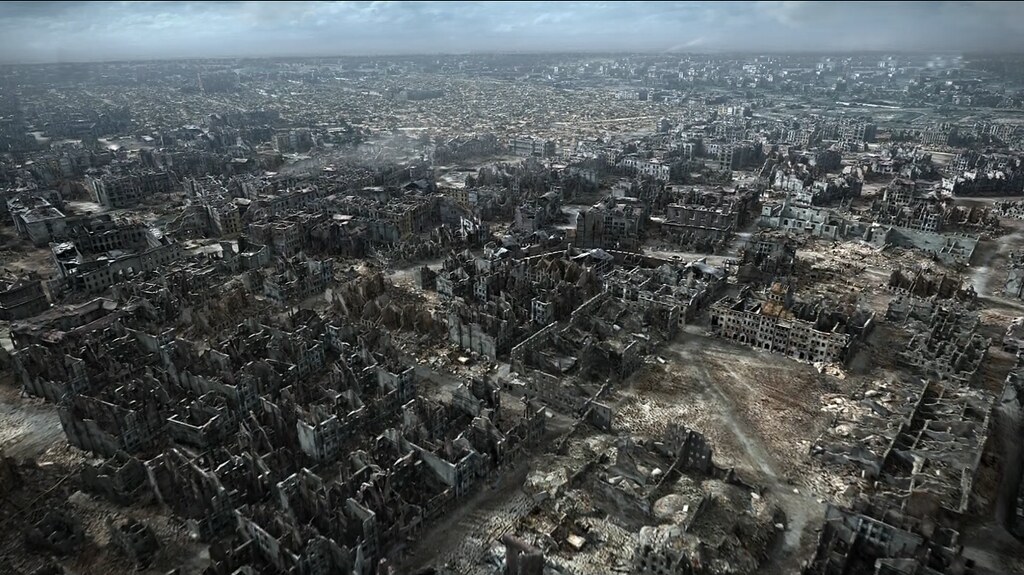 Warsaw razed. Once the 1944 Uprising was defeated, the Germans set out to raze the capital of Poland, using flamethrowers and explosives. More than 900 historic buildings, more than 10,000 buildings, 25 churches – including the Warsaw Cathedral -, 14 libraries, 145 schools and two universities, among other buildings, were destroyed. The level of destruction of the city reached such an extreme that after the war the possibility of not rebuilding it was raised. The worst were the human losses: between 150,000 and 200,000 people in Warsaw were killed by the Germans or died during the fighting in the city. 16,000 Polish resistance fighters died during the Uprising, and 15,000 were taken prisoner. Between 500,000 and 550,000 civilians had to leave their homes. 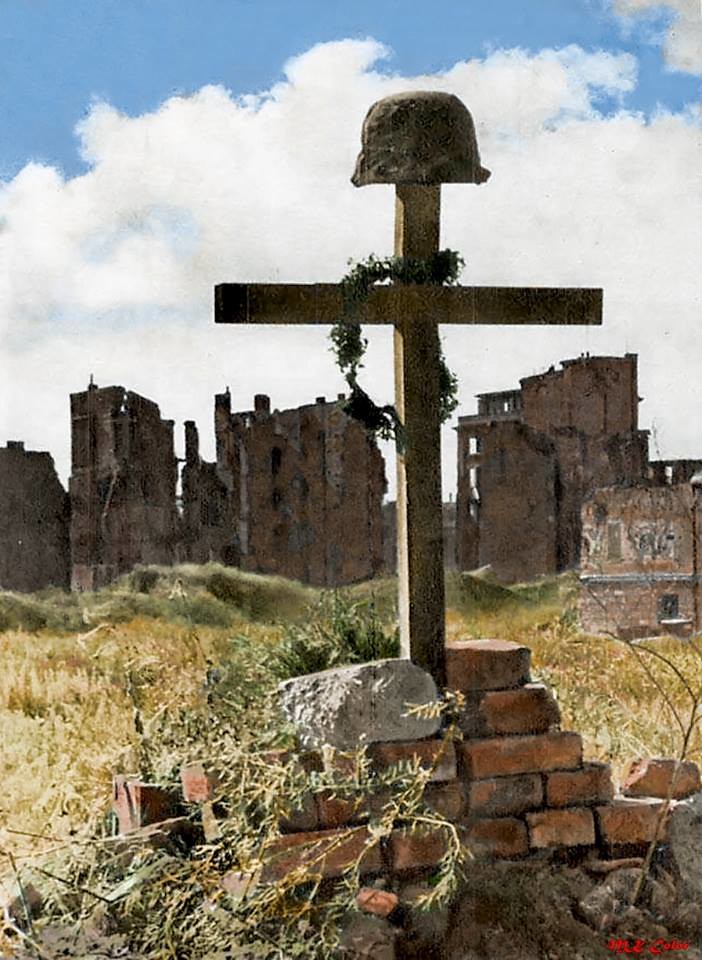 I finish this post with this photo of a tomb of a soldier of the «Chrobry» Battalion of Armia Krajowa who died on August 31, 1944. The soldiers of this battalion fought in the districts Wola, Śródmieście and the Old Town. More than 300 soldiers of this unit fell during the Uprising. May God have them, them and all the heroes of the Warsaw Uprising.