Several hundred Jewish fighters clashed with the Germans in 1943

“To die with dignity, fighting”: this is how the Warsaw Ghetto Uprising was

On April 19, 1943, the day of the Hebrew Passover, the Jews of the Warsaw Ghetto staged a desperate and heroic armed uprising against the Nazis’ attempt to liquidate them.

After the German invasion of Poland in September 1939, the Nazis began a brutal campaign of persecution of Jews in the Slavic country. Any Polish attempt to shelter a Jew was punishable by the execution of all the occupants of the house, despite which many Poles risked their lives to save their Hebrew neighbors. On April 1, 1940, the Germans began to raise the walls of the Warsaw Ghetto, with the purpose of enclosing in it Jews brought from different parts of Poland and from other countries occupied by the Third Reich. At the peak of occupation of the Ghetto there were about 460,000 people within its walls, in an area of ​​3.4 square kilometers. The construction of the Ghetto was part of a genocide planned by the Nazis, continuously reducing the food rations of the occupants of the walled area. To give us an idea, if the German minority during the occupation received the equivalent of 2,613 calories per day, Poles received the equivalent of 699 calories, and Jews only 184 calories. Between November 1940 and July 1942 some 100,000 people died of hunger or diseases in the Warsaw Ghetto. 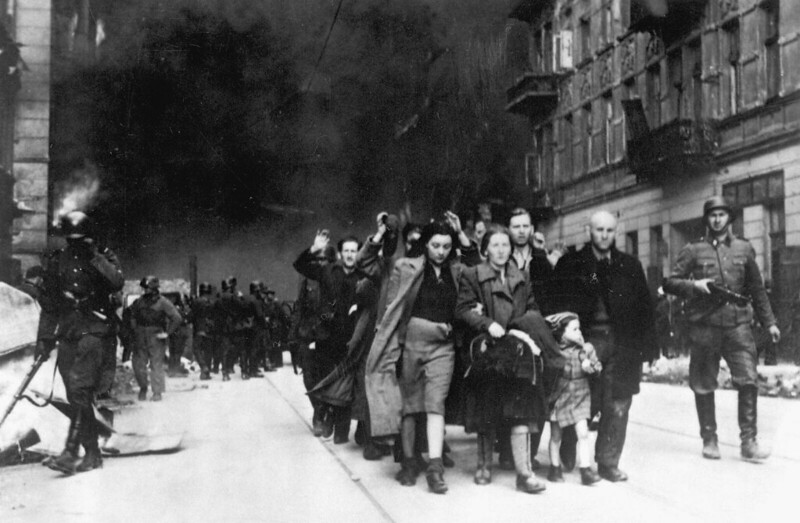 The Jewish resistance organizations within the Ghetto

On July 22, 1942, the Germans began moving Jews from the Ghetto to the Treblinka extermination camp, bringing in total 75% of the Jews who were still alive in the Ghetto. In January 1943 the first actions of armed resistance of the Jews of the Ghetto against these deportations began. Within the walls, the main organization of resistance was the Żydowska Organizacja Bojowa (ŻOB, Organization of Jewish Struggle), grouping leftist Jews and was led by the young commander Mordecai Anielevich, 23 years old. At the end of 1942 the ŻOB had about 600 combatants and maintained contacts with the Armia Krajowa (AK, National Army), the main organization of the Polish resistance, which provided the Jews of the Ghetto with 2 heavy machine guns, 4 light guns, 21 submachine guns, 50 pistols and more than 400 hand grenades. The other resistance organization of the Ghetto was the Żydowski Związek Wojskowy (ŻZW, Jewish Military Union), which grouped right-wing Jews – some of them members of the Polish Army at the beginning of the war – under the command of Dawid Wdowiński, with about 250 combatants.

A heroic Uprising without any hope of victory

On April 18, 1943, the head of the SS, Heinrich Himmler, gave orders to liquidate what was left of the Warsaw Ghetto, where between 50,000 and 70,000 Jews remained. At 6 o’clock on the morning of the 19th, German soldiers and police arrived at the Ghetto, accompanied by collaborators from Ukraine and Latvia. The ŻOB fighters were waiting for them at the intersection of Nalewki and Gęsia streets, and ŻZW members were entrenched in Muranowski Square. When the Germans arrived at the entrance to Nalewki Street, the members of the ŻOB began throwing hand grenades and Molotov cocktails. It was the beginning of some hard fighting that lasted several weeks, and that had no military purpose other than to die fighting: the Jews of the Ghetto knew that they had no hope of defeating against the powerful German war machine. Marek Edelman, one of the survivors, commented years later: “The aim of the Uprsing was to die with dignity, fighting, not to win the fight, we all realized that we had no chance of winning.”

The support of the Polish resistance from abroad

From the outside, the Jewish insurgents of the Ghetto were supported by the Polish resistance, both the aforementioned Armia Krajowa and the Gwardia Ludowa (communist partisans). In total a dozen actions were carried out from outside against the German troops from the first day of the Uprising, when members of the AK headed by Józef Pszenny “Chwacki” tried to blow up, unsuccessfully, a part of the wall to allow the exit of the Jews. Some members of the AK came to enter the Ghetto, through the tunnel of Muranowski Square, to support the Jewish insurgents of the ZZW and provide them with weapons, ammunition and food. Several members of the Polish resistance perished in these actions in support of the insurgents of the Ghetto. 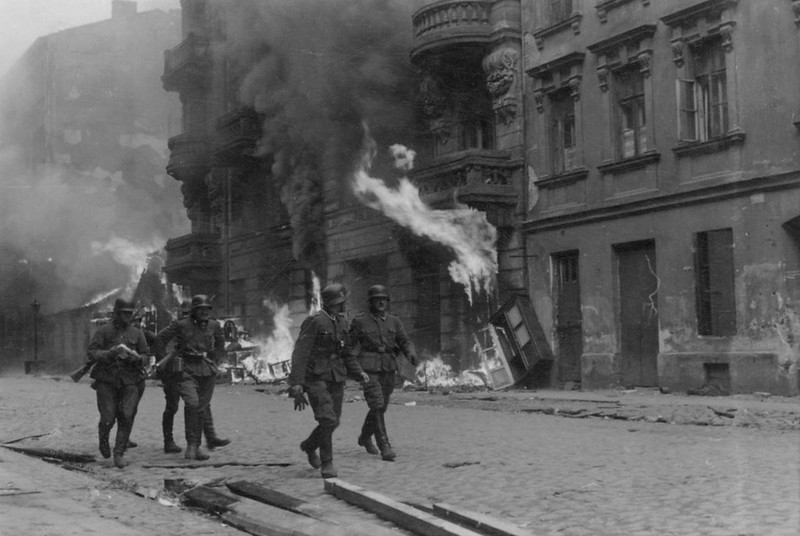 German SS soldiers near burning buildings on Nowolipie Street, in the Warsaw Ghetto, during the 1943 Uprising.

The balance and the legacy of the Warsaw Ghetto Uprising

The balance of the Ghetto Uprising was very unequal. The Germans had 86 dead and 420 wounded, according to calculations of the Polish resistance, while among the Jews of the Ghetto there were more than 56,000 who were killed or ended up being prisoners of the Nazis, being sent to concentration camps. The Germans ended up burning all the buildings of the Ghetto to get out the Jews who took refuge in them. Among the survivors who managed to flee, some joined the AK to continue the fight against the Germans. One of the best testimonies of the fighting spirit of those Jewish insurgents is the proclamation issued by the ŻOB to the Polish population on April 23, 1943, on the fifth day of the Uprising, which was distributed among the population of Warsaw:

In the midst of the explosions of the artillery with which the German Army shoots against our houses and homes, our mothers, children and women;
In the middle of the rattle of the machine guns that we captured in the combats with the coward gendarmes and the SS sheep;
Between the smoke of the fires and over the streams of blood which flow in the murdered ghetto of Warsaw – we – prisoners of the ghetto – send you our cordial greetings.
We know your heartbreaking pain and tears of compassion, that with admiration and fear for the result of this struggle, you look at the war that we have been facing with the cruel occupation for many days.
But also know that every threshold of the ghetto, as it has been up to now, will continue to affirm that we can all perish in battle, but we will not give up; that we are panting, and that you are seeking revenge and punishment for all the crimes of the common enemy.
It is a fight for yours and our Freedom.
For yours and our – human, social, national – honor and dignity.
We will avenge the crimes of Auschwitz, Treblinka, Belzec and Majdanek.
Long live the brotherhood of arms and blood of the fighting Poland!
Long live freedom!
Death to those who torment us and torture us!
Long live the fight of life and death against the invader!

The spirit of this proclamation would inspire, the following year, the Polish patriots who rose up in arms throughout Warsaw and in other cities of Poland against the Germans, staging a tough Uprising that would last two months.

My memory from Spain for those Jews of the Warsaw Ghetto, and for all the Poles of any race and belief who fought for the freedom of Poland.