He was brutally attacked by two far-leftists; there is a 'squatter' detained

Hispanophobia Kills Again: A Man Is Murdered for Wearing Suspenders with the Spanish Flag

His name was Víctor Lainez. On December 8, two far-leftist youths assaulted him with an iron bar, leaving him brain dead, for wearing suspenders with the Spanish flag.

This midday the newspaper Heraldo de Aragón has given news of his death as a result of serious injuries suffered in the aggression. So, it is a full-blown murder. In fact, his assailants attacked him from behind, hitting his head with the iron bar, and when the victim collapsed, they continued to kick him once on the ground. At the moment the Police have already arrested a “squatter” of 33 years in relation to this crime.

Lainez was 55 years old, was Catalan, born in Tarrasa (Barcelona) and a resident of Zaragoza for years. The most surprising thing about his murder is that it took us four days to learn about the deadly aggression. No media had published anything, perhaps because the police did not communicate it either. The news jumped last night because it was posted by a Twitter user, @JovenEuropeo. Although it was known that Lainez died this afternoon – Heraldo de Aragón published it at 14:34 – none of the midday news of the big television networks has reported what happened. The big media have not given news of what happened, which is only being reflected at this time by some digital media.

Hispanophobia: a hatred that has been killing Spaniards for many years

We are facing a clear case of what is now called a hate crime, and more specifically a crime for hispanophobia, a form of hatred that some political parties continue to foment, some of which hold public office and enjoy subsidies that all Spaniards pay. Unlike other forms of hatred such as racism, xenophobia or homophobia, hispaniophobia has the approval of a part of the media and participants in television talk shows, who are shocked and start asking for sanctions and convictions when someone even discusses gender ideology or multiculturalism. The fact is that hispanophobia has been killing Spaniards for many years. It is one of the ideological ingredients of terrorist groups such as ETA, Terra Lliure and Exército Guerrilheiro, responsible – especially the first – for the murder of hundreds of Spaniards. However, unlike racism or homophobia, our politicians do not seem to have any will to eradicate it, in some cases for cowardice and in others for open complicity with those who promote it.

My condolences to the family and friends of Víctor Lainez, and my wish that the authors of this crime pay soon for what they have done. 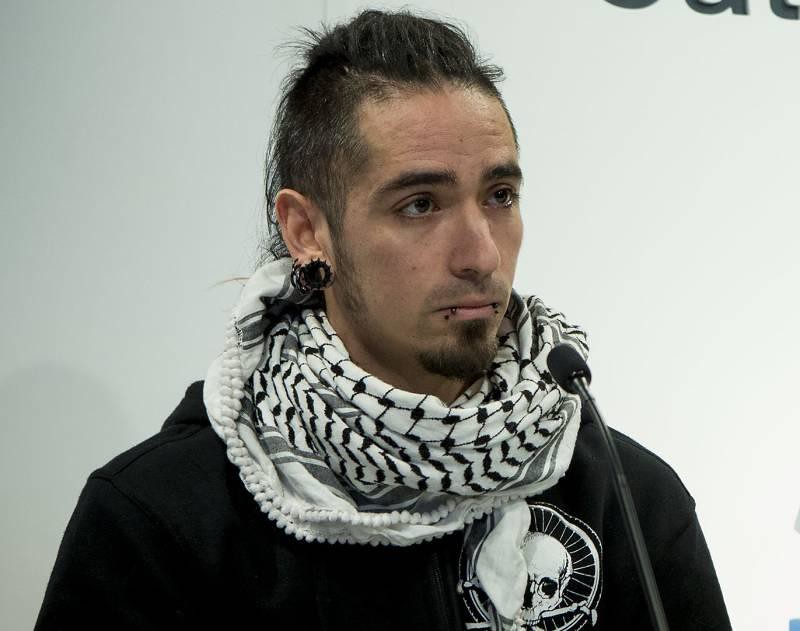 + UPDATED 19:15h: El Periódico de Aragón has just informed about the identity of the far-leftist detained in relation to this crime, from which he publishes his photo (on these lines). His name is Rodrigo Lanza, he is of Chilean origin but he has Spanish nationality and he was nine years in prison for leaving an urban guard in Barcelona to a quadriplegic. According to a news item published in El Periódico de Cataluña in January 2015, Lanza injured a policeman with a stone in 2006. “He made a show of this incident, telling the agents that he was the author,” the Barcelona Urban Guard said in a report. In January 2013, the far-left newspaper Público interviewed this delinquent, who said he had spent five years in prison “because he is a greaser.” The newspaper Público was condescending with the interviewee, putting on his part with questions such as “Do you think there is justice in Spain?”. At the time of writing, the newspaper Público has not yet reported the murder of Víctor Lainez or the arrest of Rodrigo Lanza.