In the ideological scheme of the left, heterosexual men are violent and oppressive, and women and homosexuals are oppressed beings. But what happens if a news breaks that scheme?

What looked like a ‘perfect’ and ‘inclusive’ progressive family

In March of last year, the New York Post reported the death in the US of a couple of white lesbians with the six black children they had adopted. The women, Jennifer and Sarah Hart, used to post photos of themselves and the children with smiley gestures on Facebook. It seemed all very idyllic, an example of “progressive” and “inclusive” family, using terms very common in certain media. In fact, Jennifer and Sarah supported the leftist Democratic candidate Bernie Sanders (in the picture that heads these lines we see the eight wearing blue shirts to support their candidacy at a rally held in Vancouver on March 20, 2016; in the video of the rally they appear behind the rostrum, on the right). They also took the children to a demonstration in 2014 in Portland against police brutality towards blacks: in it one of the children, Devonte, embraced a policeman. The image went around the world and to try to explain it, Jennifer said that the officer asked the child for a hug. 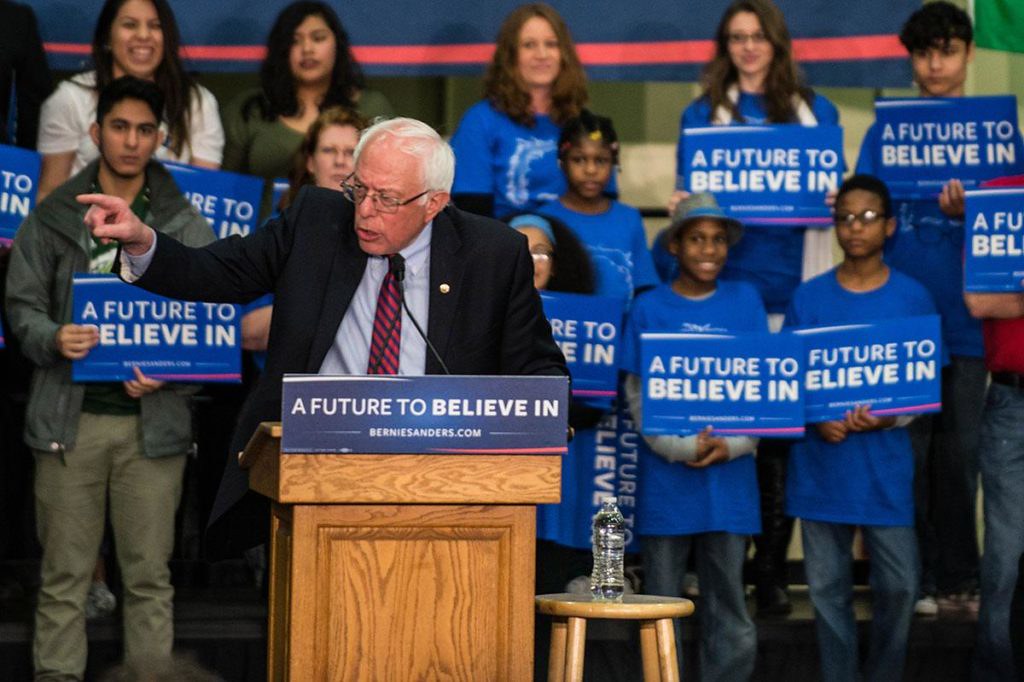 The leftist Bernie Sanders, one of the candidates of the Democratic Party primaries, at a rally in Vancouver on March 20, 2016. Behind the rostrum, on the right, were Jennifer and Sarah Hart and five of the children they adopted, wearing blue support shirts to Sanders (source: Tristan Fortsch, KATU News).

However, the death of the eight uncovered a history of abuse of children by the women. The first three had been adopted in 2006 and the other three in 2008. In September 2008 one of the girls, Hannah, then six years old, told police that Jennifer had hit her with a belt. The couple alleged that the girl’s injuries were due to having fallen down some stairs, and the police closed the case without taking any action. The neighbors said that children behaved like robots, even to go to the bathroom they had to ask permission, and for whatever reason they were punished without eating. In 2010 and 2011 the children staged several incidents at school for searching for food in the trash or taking their food from other children. In 2011 Sarah was convicted for assaulting and punching one of the girls, Abigail, then 6 years old. A teacher discovered that the girl had a the body full of bruises. After that sentence, the children stopped going to school.

In July 2013, the State of Oregon issued a 30-page report full of allegations of abuse against the children. Several of them were too small for their ages. Jennifer and Sarah argued that the children had always been smaller than normal. A doctor examined them and showed no concern, according The Washington Post. After moving to Washington in 2017, the Police received a complaint that Hannah – already 16 years old, although she appeared much less by her stature – had jumped out the window of a second floor at dawn and appeared in the house of some neighbors: she was missing two teeth. The girl told her neighbors that Jennifer and Sarah were racists and were abusing her. However, the children asked the neighbors not to call the Police because they did not want to be separated from their siblings.

Another day Devonte appeared at the house of those neighbors asking for food. When the boy hugged that cop in 2014, he and his brothers had been mistreated and hungry for years. Finally, on March 23 of last year, a neighbor reported what was happening. When the police arrived at the house, nobody opened the door. The next day, the women packed their bags and left from their place of residence in Woodland (Washington) to California. A day later his vehicle was descending by a cliff near San Francisco. Inside were the two women and the six children. 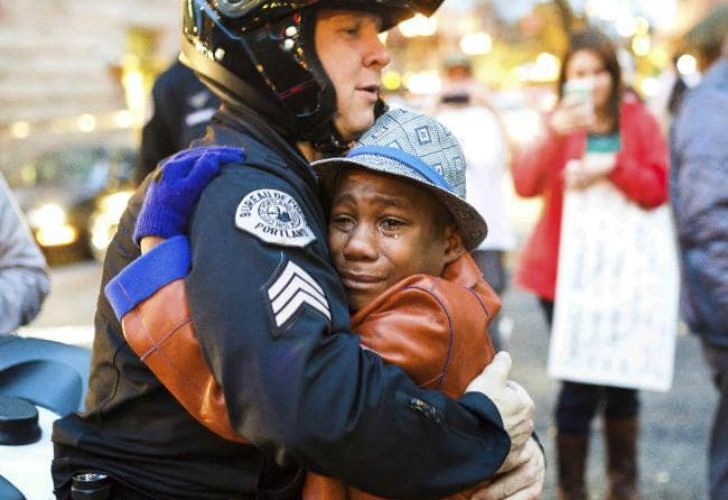 Kevonte, one of the children adopted by Jennifer and Sarah Hart, crying and hugging a Police officer in Portland in 2014, during a rally against Police violence against blacks. Jennifer said the agent had asked for a hug. However, at that time the children had been suffering hunger and abuse for years (source: Johnny Huu Nguyen/AP).

A jury confirms that the accident was actually a homicide

Last week, a California jury ruled that the incident was not an accident, but a deliberate act, so that the women committed suicide and the death of the children has come to be considered a homicide. According to one witness, the vehicle accelerated before falling down the cliff at dawn on March 26, 2018. In addition, the autopsies performed have revealed that the children were drugged before the homicide. As established in the judicial process, the women decided that if they could not have the children, then no one would.

I have searched for this news in some Spanish media that usually support leftist feminism and gender ideology, and I have found something curious: media such as El País, Telecinco, Cadena SER, Eldiario.es, Público and El Español have not published anything about this crime, despite the fact that they give all kinds of news of events that occurred both in Spain and abroad. It is news that other Spanish media and a multitude of foreign media have published. As it seems, if a news radically contradicts the progressive prejudices, then it is hidden. It is not the first time that they silence uncomfortable news, and it will not be the last.

Main photo: Jennifer and Sarah Hart with the six children they adopted at a rally in support of leftist politician Bernie Sanders of the Democratic Party on March 20, 2016. The eight wore blue T-shirts with an artistic portrait of that politician (source: Tristan Fortsch, KATU News).