These days the NATO Baltops 19 exercise begins in Baltic Sea waters, bringing together 50 surface ships, 2 submarines and 8,600 soldiers from 18 countries until June 21.

It is the 47th edition of these exercises, initiated during the Cold War. This year there are ships, aircraft and personnel from Germany, Belgium, Denmark, Spain, the United States, Estonia, Finland, France, Latvia, Lithuania, Norway, the Netherlands, Poland, Portugal, the United Kingdom, Romania, Sweden and Turkey. This year the Spanish Navy brings three ships to the exercise: the LHD “Juan Carlos I” L-61, with 7 fighters EAV-8B+ Harrier II, 3 SH-3D Sea King helicopters, 4 landing craft LCM-1E, 38 vehicles, 300 crew, 306 Marines, 30 members of the Naval Beach Group and 105 members to the air wing on board; and the frigates “Cristóbal Colón” F-105 and “Almirante Juan de Borbón” F-102. The latter was already deployed since the end of March with the NATO Permanent Maritime Group SNMG-1 in northern Europe. 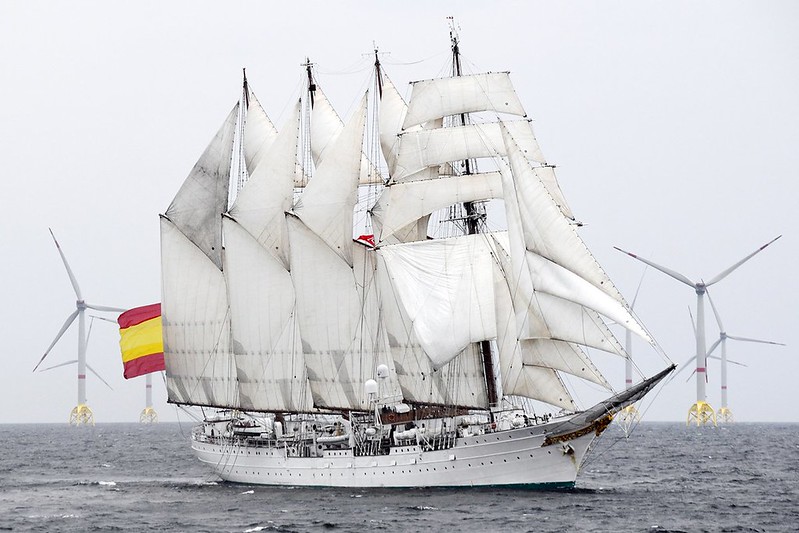 In addition to the three aforementioned Spanish vessels, at this time the school ship “Juan Sebastián de Elcano” sails to the Polish port of Szczecin, within the framework of its XCI Cruise of Instruction. This Sunday, June 16, a oath of Flag will be made on its cover (you can find more information on the website of the Spanish Embassy in Warsaw). After this, the Elcano will stop at the German port of Kiel, and then return to Spain. In this photo published yesterday by the Navy we see the Elcano passing by the wind farm Wikinger of Iberdrola, in German waters of the Baltic. At the time of publishing these lines the Spanish sailboat was already sailing at the height of the Polish port of Świnoujście, according to MarineTraffic. 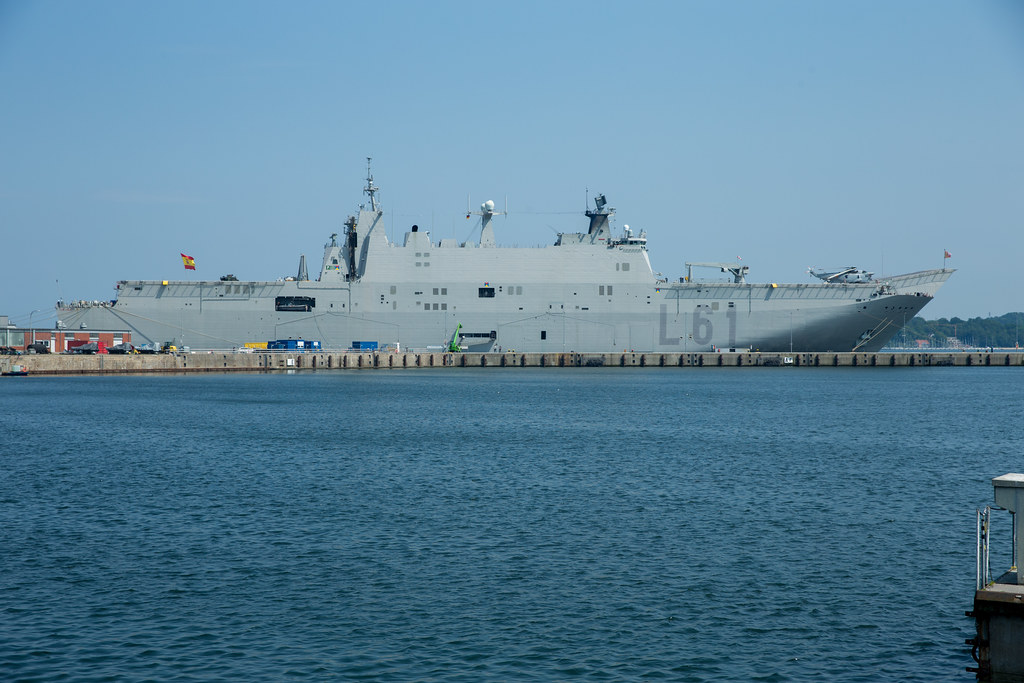 On these lines, the “Juan Carlos I” at the Kiel Naval Base, in Germany, in a photo taken on June 5 by the US Marine Corps. 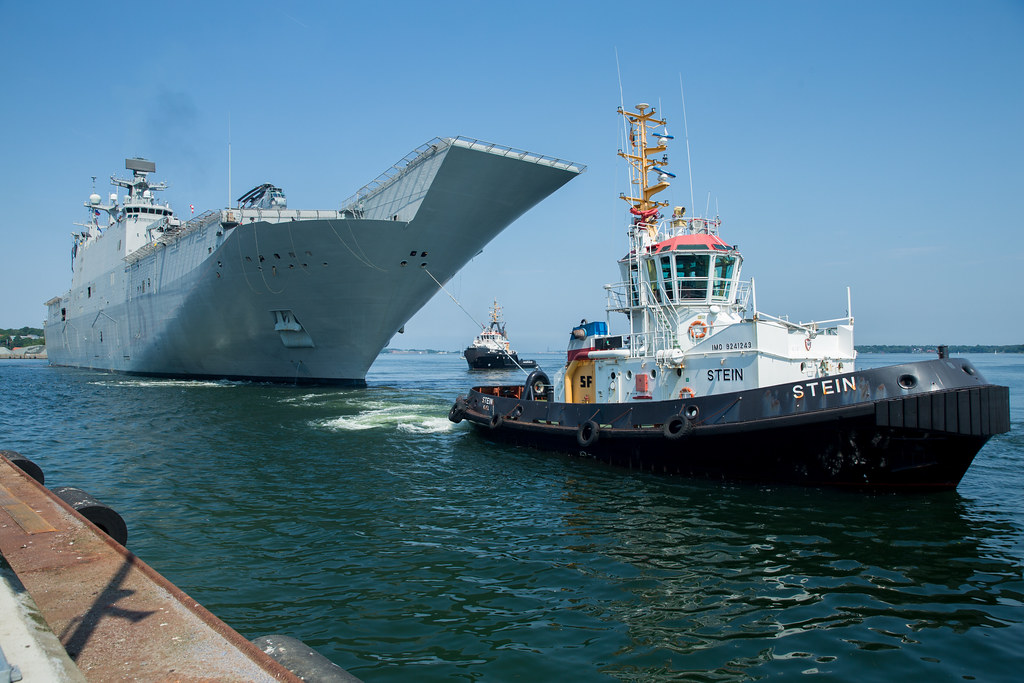 In this other photo, also taken by the Marines, appears the “Juan Carlos I” dragged by the German tug “Stein” from the port of Kiel on her arrival in that German town on June 5. 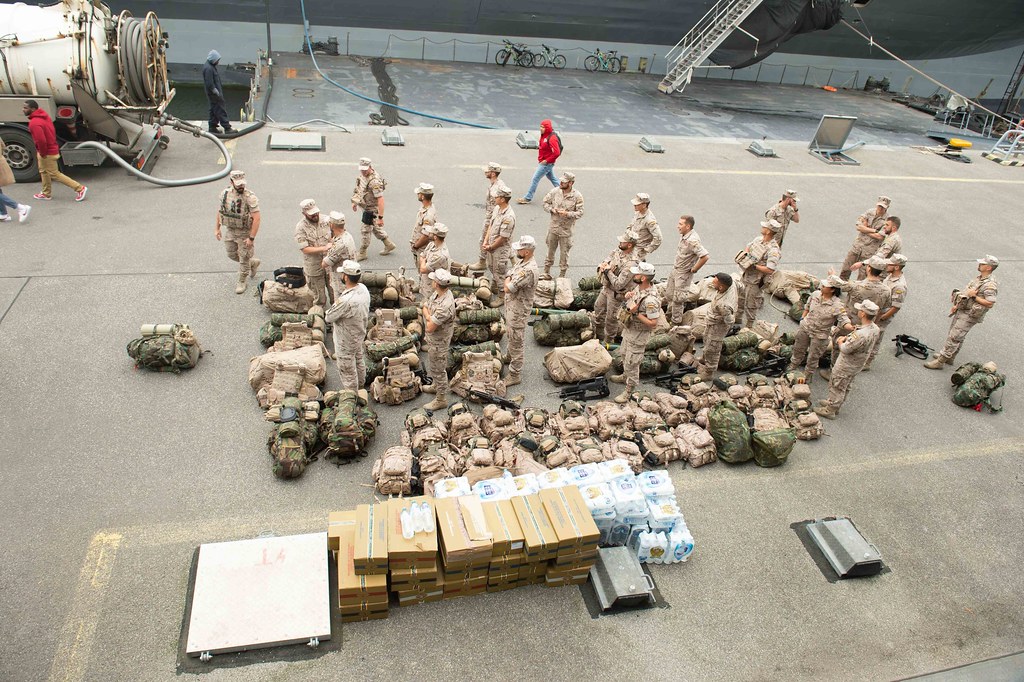 On June 8, part of the Spanish marines who arrived aboard the “Juan Carlos I” landed at Kiel to later board the American landing ship USS Fort McHenry (LSD 43). In these photos, published by the US Navy, we see troops of the Second Landing Battalion (BD-II) of the Tercio de Armada (TEAR), which is based in San Fernando (Cádiz), embarking on the US ship, guided by a member of the 22nd Marines Expeditionary Unit (22nd MEU), which is based in Camp Lejeune (North Carolina). 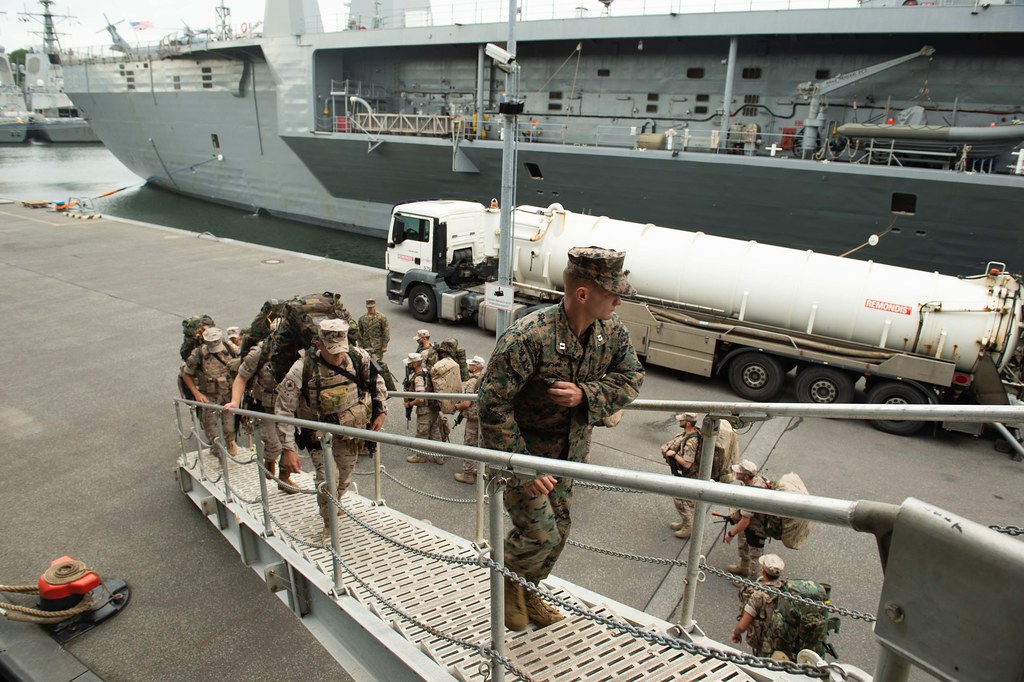 As they do in the ships of the Spanish Navy, and as a sign of respect, the Spanish soldiers saluted the US flag when they embarked on their host ship. 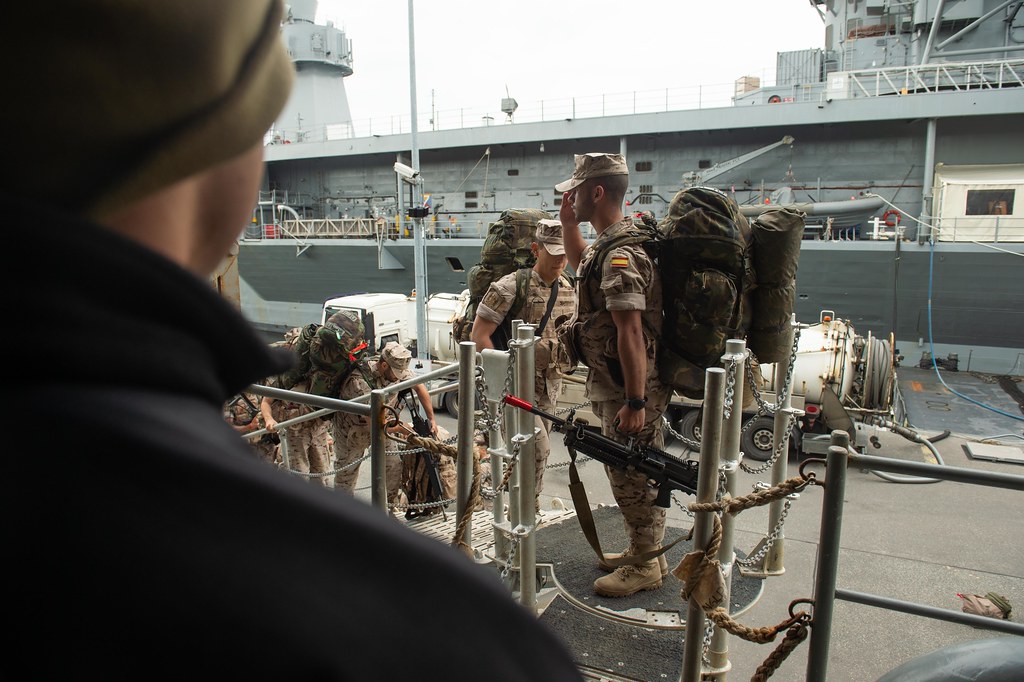 One of the things that most must hit the US sailors and marines is one of the hallmarks of the Spanish Armed Forces: the beard. In the US Armed Forces it is only allowed in exceptional cases, as special operations forces. In the Marines the beards are forbidden. 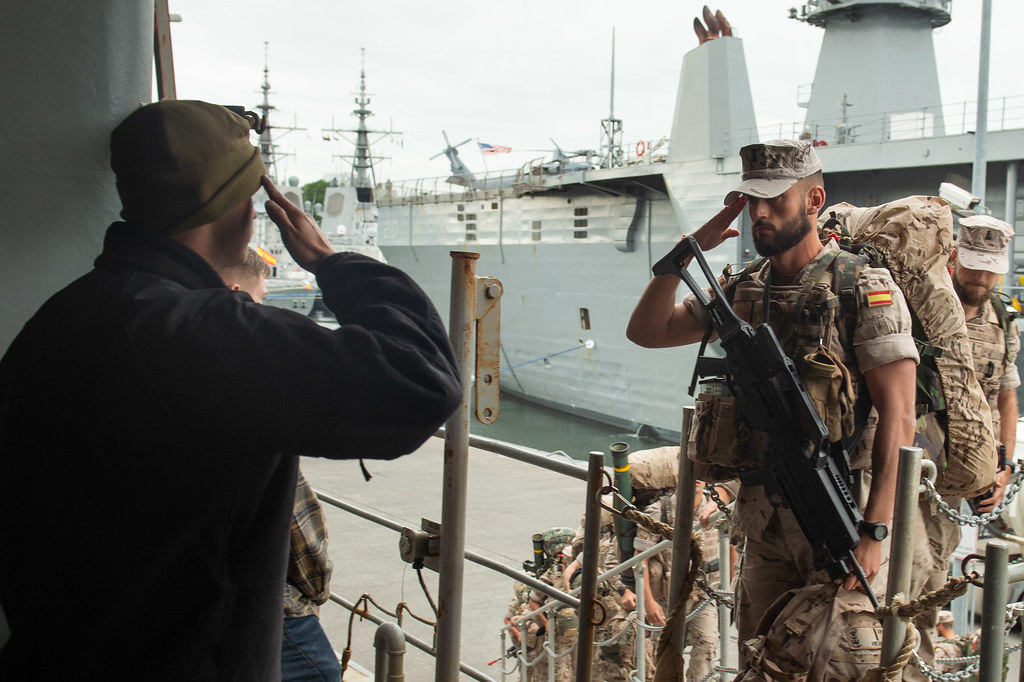 In this other photo published by the US Navy we see the Spanish marines already embarked at the USS Fort McHenry. 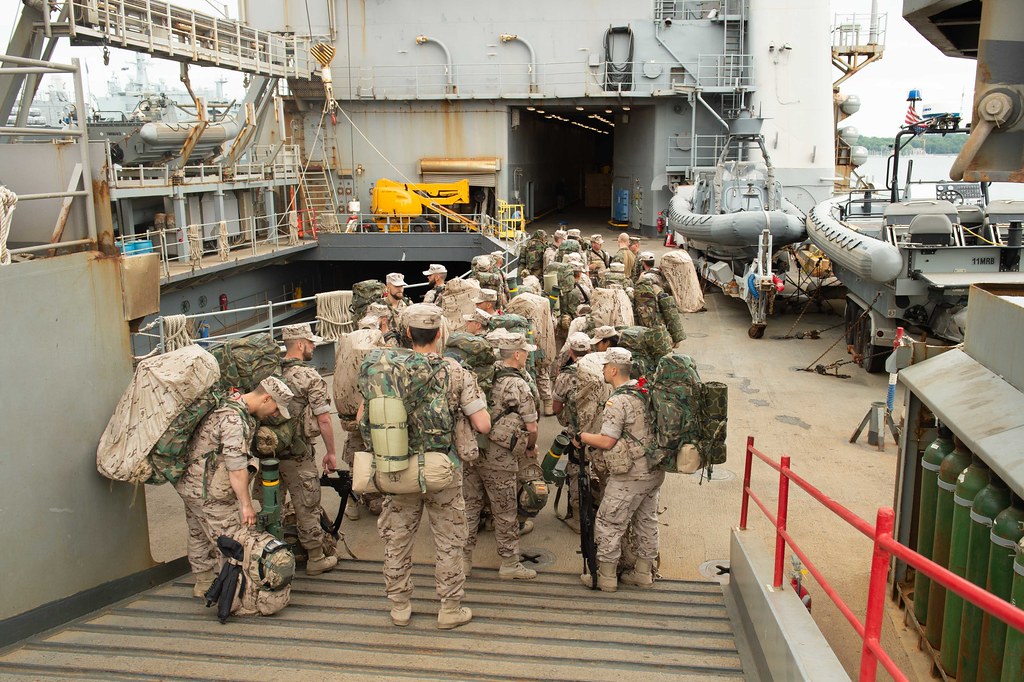 This exercise will be a new opportunity to demonstrate the capabilities of the Spanish frigates of the “Álvaro de Bazán” class, also known as F-100. In this picture, commander Steve Schmidt, commanding the USS Fort McHenry, sees the Spanish frigate “Cristóbal Colón” yesterday. 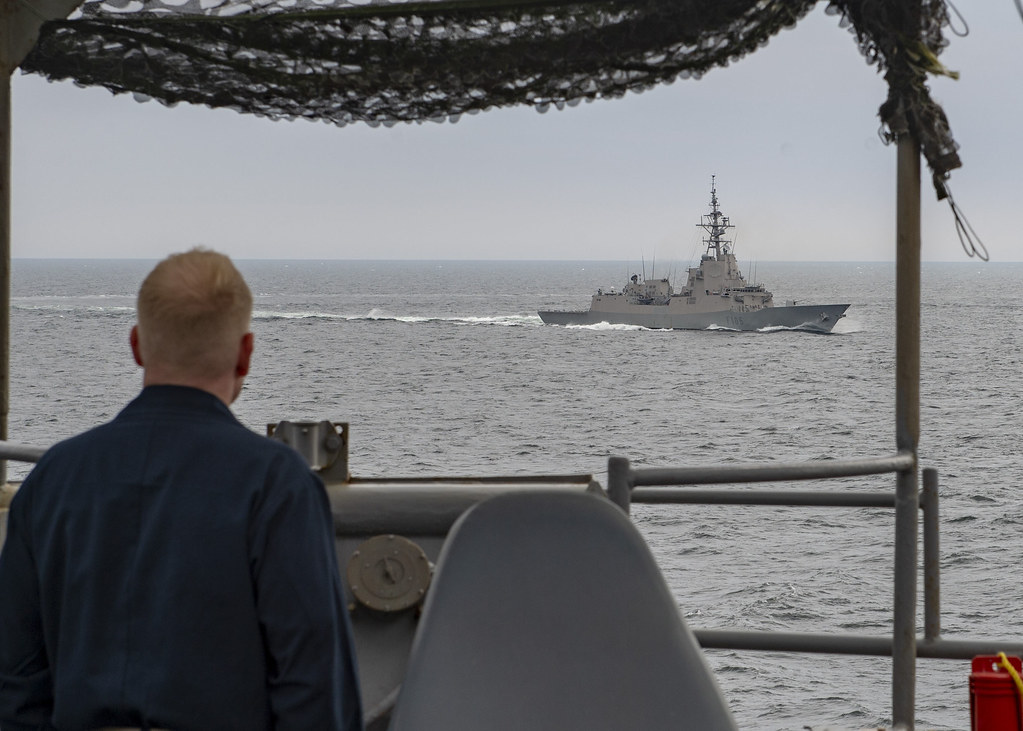 The following photo was taken today and has been published by the Spanish Navy: the “Juan Carlos I” sailing with the Danish support vessel “Absalon” L-16, a vessel with similar characteristics to the Spanish Maritime Action Vessels (BAM). 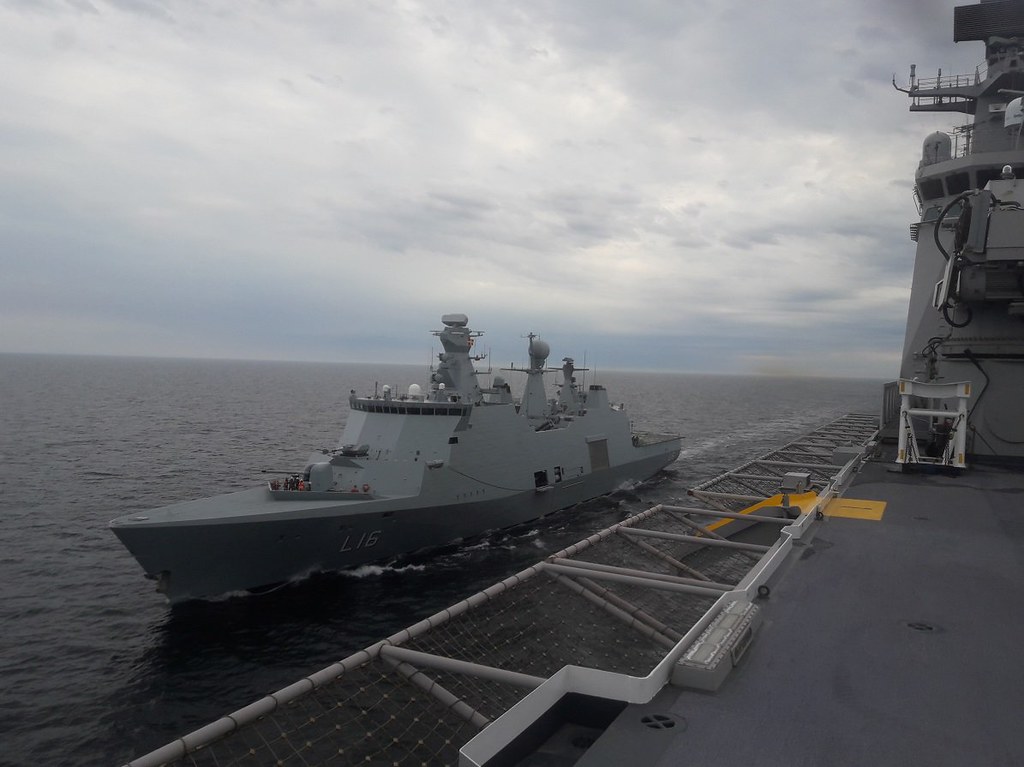 Russia organizes a naval exercise to monitor the maneuvers of NATO

The presence of such a large NATO fleet in the waters of the Baltic seems to have done no good to Russia. The Russian Baltic Fleet is based in the enclave of Kaliningrad, on the Baltic coast, a territory that belonged to Germany until the World War II. As the official Russian agency Tass announced yesterday, Russia has organized its own naval exercise to monitor the NATO fleet. The corvettes “Boiky”, “Stoiky”, “Serpukhov”, “Zelyony Dol”, “Liven” and “Passat” will participate in it (these last four are mentioned in the note as missile ships, but in fact they are corvettes of the Buyan class) and the anti-submarine corvette “Aleksin”. These vessels will practice antisubmarine warfare, missile attacks against the ships of a simulated enemy, artillery and torpedo fire and shots against air and sea targets of varying complexity, according to the Tass note, which adds that on June 8, three of the Russian ships, the corvettes “Stoiky”, “Boiky” and “Liven”, were watching the NATO Baltops maneuvers.

A Russian fighter intercepts a Swedish aircraft and an American one

Today the tension between Russia and NATO has been increasing when the Tass agency published a statement saying that a Russian fighter Su-27 intercepted on Monday neutral waters to two reconnaissance aircraft of countries participating in the Baltops exercise, stating that they were heading towards the Russian border. Specifically they would be one of the two Gulfstream IV that the Swedish Air Force has for SIGINT missions (signals intelligence) and a RC-135 of the United States Air Force, a model specialized in ELINT missions (electronic intelligence). Russia has published this video in which images of the two intercept missions are seen:

Main photo: DVIDShub. The Spanish frigates ‘Cristóbal Colón’ and ‘Almirante Juan de Borbón’ at the German base in Kiel, as part of the Baltops 2019 exercise.