The USSR created biological weapons there to spread its revolution

Aralsk-7: abandoned ships in a desert and the dark secret of a communist regime

One of the most curious places to explore ruins is the so-called Vozrozhdeniya Island, divided between Kazakhstan and Uzbekistan. A site with a deceptive name, because it is not even an island.

One of the greatest ecological disasters in history

Vozrozhdeniya yes that was an island for a long time, one of the largest of the Aral Sea (which speaking strictly is not a sea, but a large lake of salt water). As you know, there occurred one of the greatest ecological disasters in history, when the Soviet Union diverted the course of the rivers Amu Daria and Sir Daria for the irrigation of crops (it was intended to convert large desert areas into gardens, to grow cotton). Because of this, the Aral Sea today has a tenth of the surface it had at the beginning of the 1960s, and as a result, many ships have been stranded in the middle of a desert. Vozrozhdeniya Island ended up being turned into a peninsula and finally disappeared from the map. 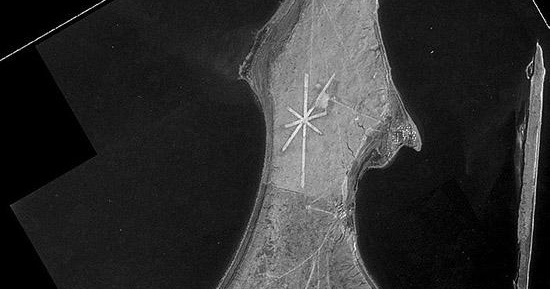 The North of the Island Vozrozhdeniya in an old satellite photo. To the east, the coastal military town of Kantubek is distinguished, and to the west is the Barkhan airfield with its characteristic star shape. (Photo: Big Picture).

Where before the island was raised in the middle of the waters there is something much more sinister than old rusty ships. This is Aralsk-7, an old Soviet military complex that was abandoned in November 1991, after the disappearance of the USSR. As the Russian blog Big Picture points out in a report on this site, as it is an uninhabited area, with a hot climate and inadequate for the survival of pathogenic organisms, the island was selected at the end of the 1920s to install this complex in order to of "extending the proletarian revolution to the whole world" through the use of these weapons of mass destruction. One wonders if the Soviet regime had stopped to think that these weapons do not distinguish the rich from the poor, or if this directly mattered little ... The first Soviet scientists arrived on the island - until then under the jurisdiction of the NKVD, the political police of Stalin- in the summer of 1936.

Between 1936 and 1941 the main Soviet center for the development of biological weapons was moved to Aralsk-7: the so-called 3rd Test Laboratory, formerly located in Súzdal. On this island, dangerous weapons of mass destruction were developed, tested and stored, including anthrax spores and bacteria from bubonic plague turned into weapons, in addition to smallpox, brucellosis, tularemia, Q fever and various biological agents created artificially. Tests of these weapons were made in the southern part of the island, often spraying them from an airplane. 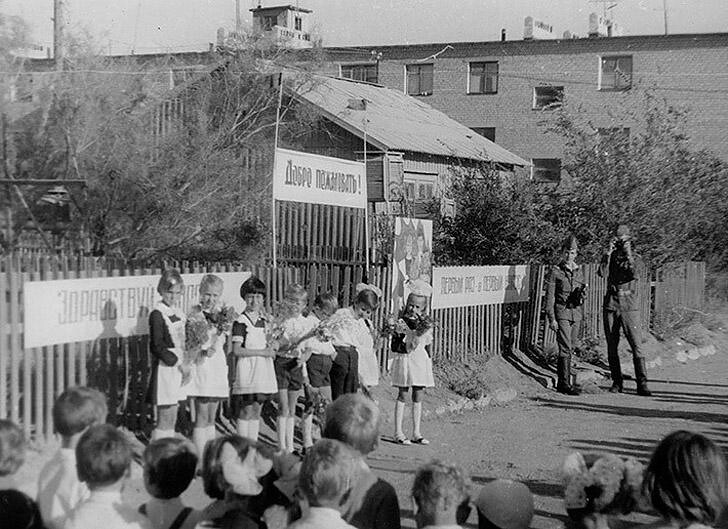 Some of the children who lived in the village of Kantubek, built to house the staff of the biological weapons complex. In the background, two Soviet military (Photo: Big Picture).

The village of Kantubek and a star-shaped airfield

These facilities were located near Kantubek, a military town built to house the staff of the biological base and their families (some 1,500 people in total). The lack of fresh water in the island forced to bring it in boats, that arrived at that military town, then located in the coast. It is scary to think that children lived there (the town had a couple of schools), near a site where dangerous biological weapons were made and tested (in fact, in 1971 there was a smallpox outbreak that infected ten people; met outside the former USSR in 2002). To the northwest of Kantubek there was a large airfield, Barkhan, the only one in the USSR with four tracks and star-shaped (you can see it on Google Maps by clicking here), a form that is due to the strong winds blowing on the island, which forced to the planes to land in different directions depending on the wind. These secret installations were first detected by an American spy satellite in the late 1960s. 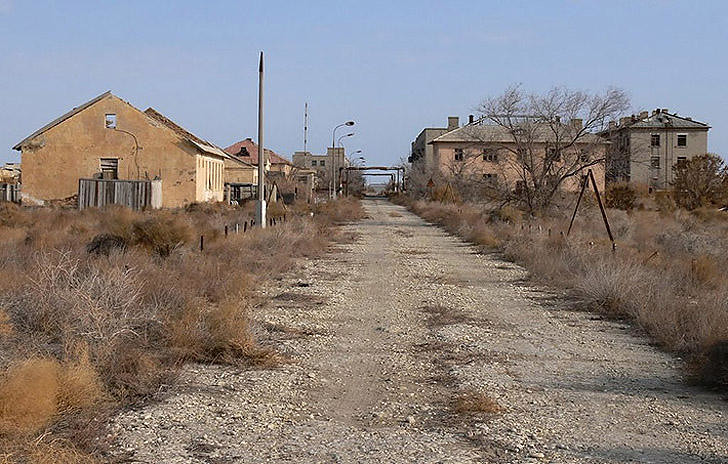 The aspect presented by the town of Kantubek today (Foto: Big Picture).

Biological weapons tests on this island were done with animals. According to Big Picture, in the 1980s 500 monkeys brought from Africa were subjected to these biological weapons: "All of them eventually became victims of the microbial strain of tularemia, after which their bodies were burned and the resulting ashes They buried in the territory of the island." After the abandonment of that military complex, according to the authorities, they took all the necessary measures to decontaminate the old island. In addition, the high temperatures of the place make the survival of pathogens difficult. However, environmental groups continue to warn of the possible risks that these ancient ruins contain, especially the ancient southern area of ​​the island, where biological weapons were tested. Today Kantubek is a ghost town and the airfield of Barkhan has been devoured by the desert. The place has become a paradise for the explorers of ruins willing to venture there. One of them is the Russian urban explorer Ninurta, who two years ago published this interesting video about Vozrozhdeniya Island and the abandoned facilities of Aralsk-7, even entering inside:

You can see here the location of Kantubek and the Barkhan airfield in Google Maps: