Russian fighters went with transponders turned off and no flight plan

Baltic: the maneuver of the Spanish EF-18 that left the Russian Su-27 fighter at a disadvantage

The incident known this tuesday between a Spanish EF-18 and two Russian Su-27 fighters over the Baltic Sea was explained yesterday by the journalist Oana Lungescu, a NATO spokesman.

In statements published yesterday by Radio Free Europe, Lungescu confirmed that the incident occurred on August 13, that is, on the same day that the Russian Ministry of Defense reported it to the media. The intercepted aircraft were a Tupolev Tu-214 transport airplane, which was the plane in which Russian Defense Minister Sergei Shoigu was traveling, and two Sukhoi Su-27 “Flanker” fighters. The interception mission was carried out by two EF-18M of 12th Wing of the Spanish Air Force (currently deployed at the Šiauliai air base, Lithuania, on a Baltic Air Police mission), and not one, as the information published by the Russian Government.

No flight plan, with transponders off and without responding to air traffic control

Lungescu was clear in giving the key to the mission of Spanish planes: “The Tu-214 had a valid flight plan. However, the two escorting Su-27 flew without a flight plan, their transponders were switched off, and they did not communicate to air traffic control.“ In addition, Lungescu noted that Russian planes were flying “over the Baltic Sea near NATO airspace,” so that Spanish fighters were alerted, “as is routine,” to identify the planes that flew without providing any identification and without informing about your destiny. Carrying transponders off is a great irresponsibility. These devices are mandatory in the European Union airspace. Among other things, they let you know if a plane has been hijacked.

A very frequent irresponsibility on Russian flights in the area

Russian airplanes that fly to Kalinigrado often do so with the transponders turned off, without flight plans and without maintaining any communication with the air traffic control agencies in the area, a behavior that some sources interpret as a provocation to NATO, while others warn that in this way the Russians test NATO air defense systems, obtaining, for example, the response times of the fighters upon receiving a Scramble alert. These incidents have been increasing after the crisis caused by the Russian annexation of Crimea (Ukraine) in 2014. In 2015 there were 410 interceptions of Russian aircraft and in 2016 there were 780.

NATO criticizes the “insecure maneuver” by one of the Su-27

On the incident between the two Spanish EF-18s and the two Russian Su-27s, Lungescu added: “They monitored the planes at a safe distance, but one of the Russian fighters conducted an unsafe maneuver, cutting into the flight path of one of the NATO jets.” This corresponds to what the video of the incident published by Russia showed, in which one of the EF-18 is seen turning sharply to avoid a collision with a Su-27 that cut its route (from the second 0: 16):

Incidentally, the Russian pilot not only acted in a risky manner, but also in an air combat the Su-27 would have been in a very vulnerable situation against the EF-18. There are two factors that give an advantage to a fighter in an air combat: speed and altitude. As seen in the video, the armament of the two fighters was similar. The EF-18 (C.15-68, 12-26) carried two IRIS-T short-range air-to-air missiles and two AIM-120 AMRAAM medium-to-air air-to-air missiles, in addition to the 20mm M61A-1 Vulcan cannon that it carries on the nose. According to The Aviationist, the Su-27 carried two Vympel R-27 medium-to-air and two short-range Vympel R-73 medium-to-air missiles, in addition to its 30mm GSh-30-1 cannon at the starboard wing root. The Spanish pilot was surprised by the insecure maneuver of the Su-27 and began a port turn to avoid collision with the Su-27: 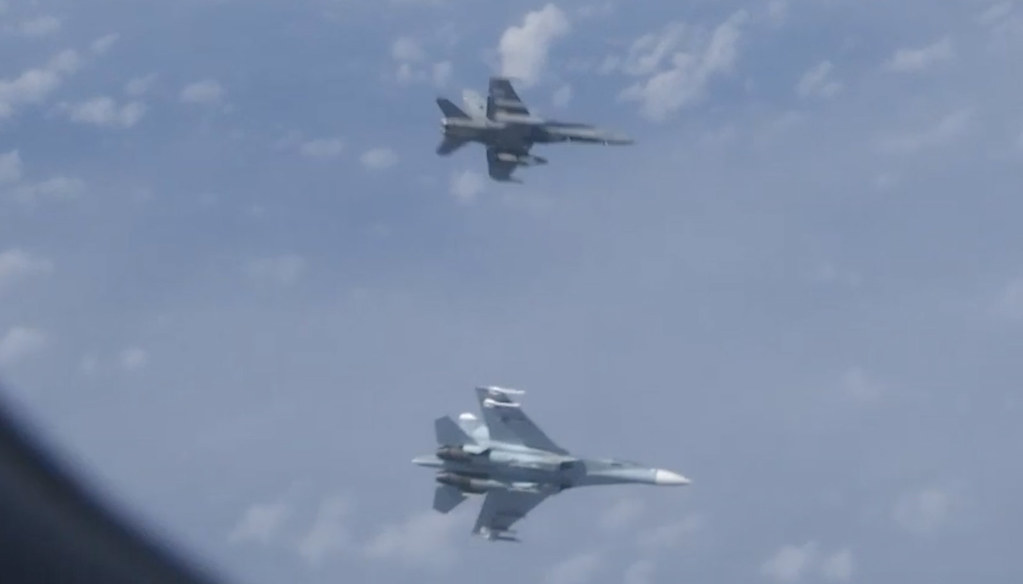 If he had continued with that turn, the Russian fighter would have been in an advantageous situation in case of air combat, having the Spanish plane at 12. But that did not happen: as we see in the following image, the Spanish pilot began to straighten his airplane: 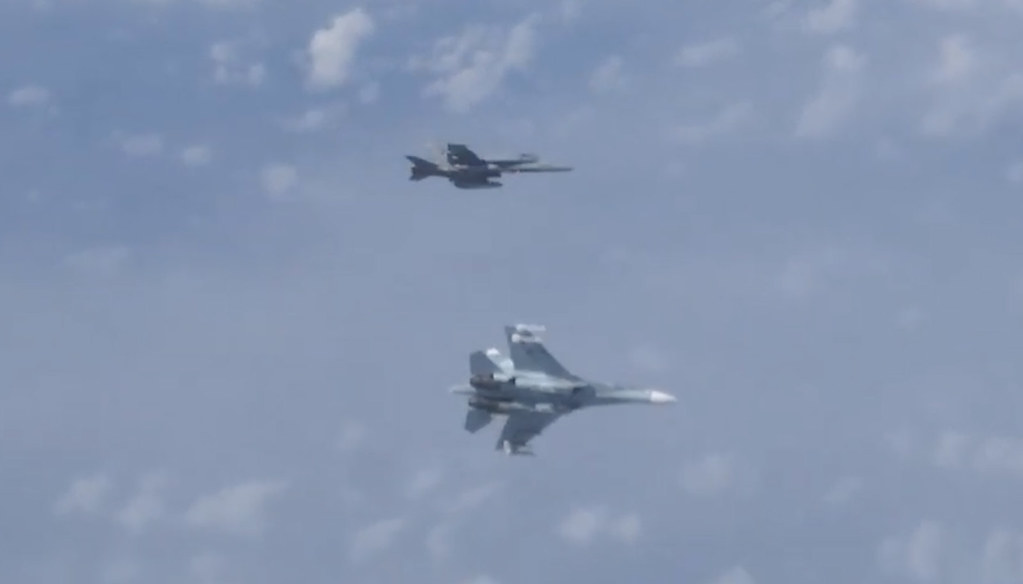 And just after, he began to gain height: 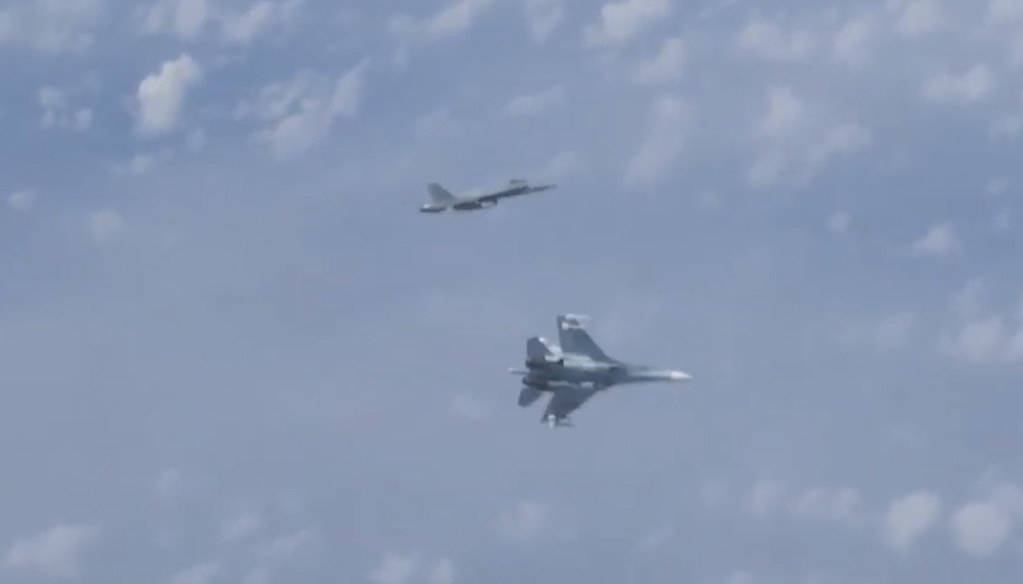 The Russian fighter failed to react to this maneuver and the EF-18 continued to gain height, thereby obtaining a tactical advantage: 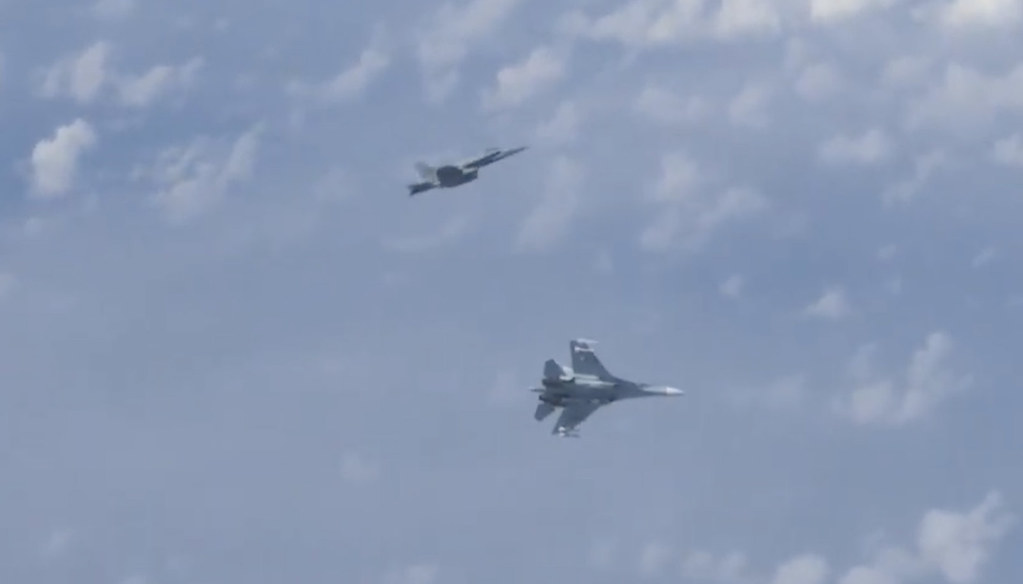 In this image, the EF-18 turns slightly to port while still ascending: 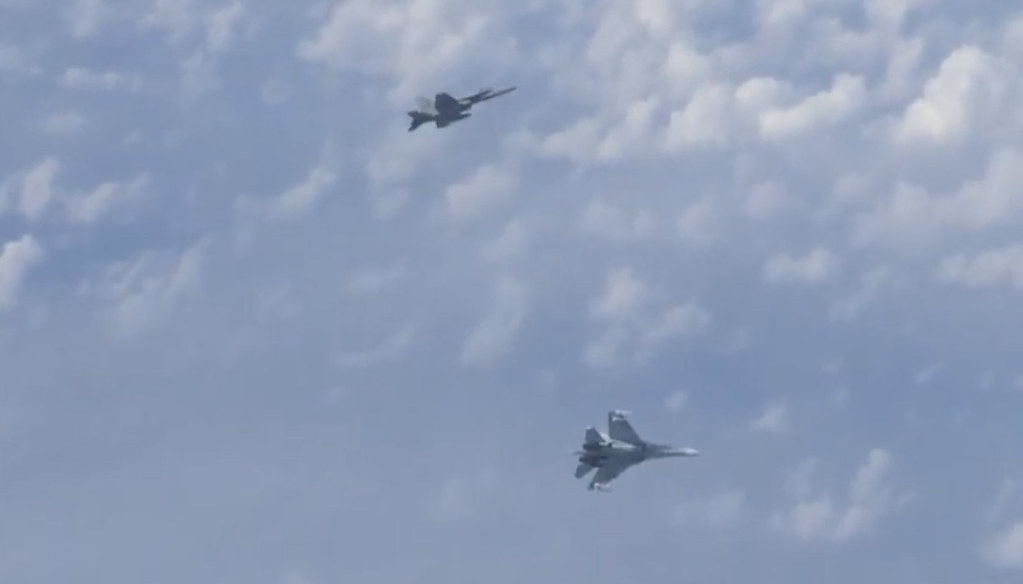 The Russian pilot is still in the loop, continuing his maneuver as if he had not realized that the Spanish pilot is gaining an advantage: 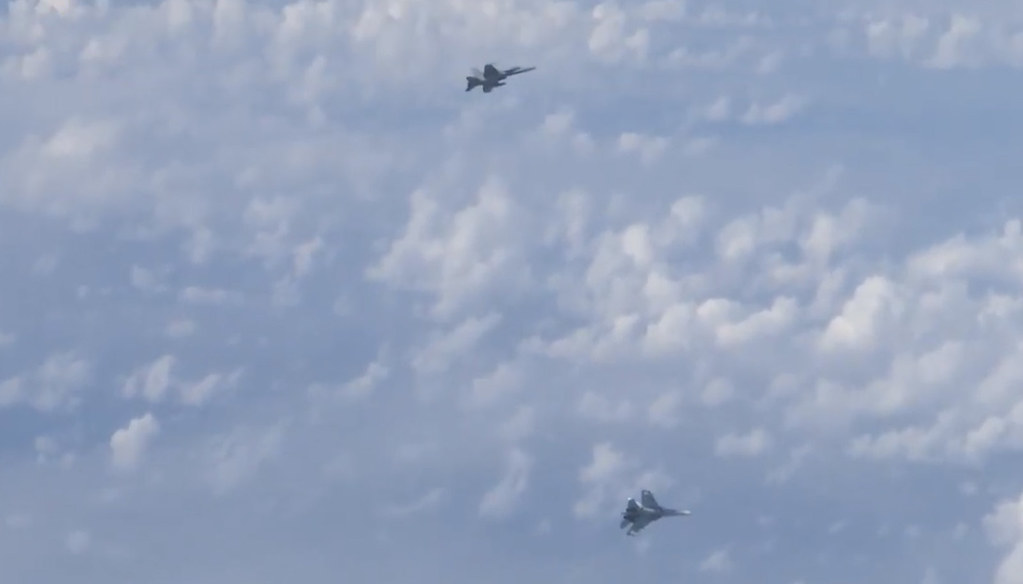 When the EF-18 finally stabilizes its flight, the Spanish pilot obtains a clear tactical advantage in altitude over the Su-27, whose pilot continues to descend without reacting to what happened: 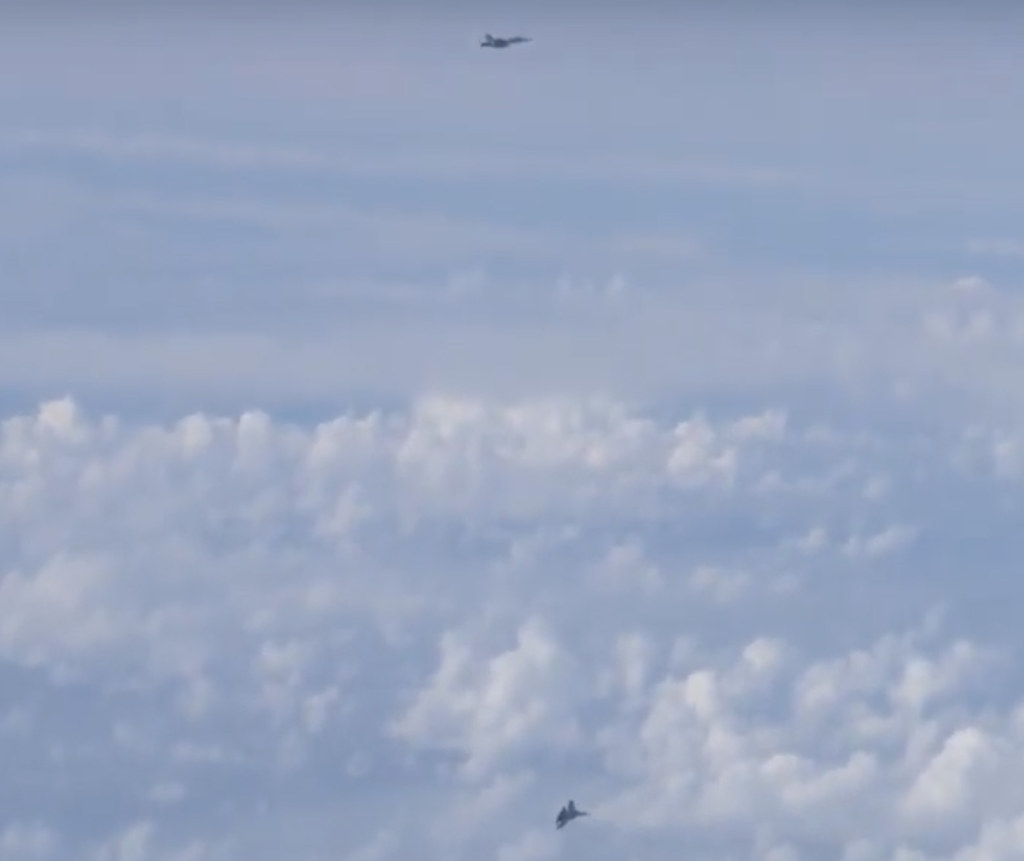 This would have allowed the Spanish fighter to execute a maneuver called “high yo-yo” in aeronautical terms, a tactic difficult to counter on the part of the rival. In this Russian video what has become clear is the great professionalism of the Spanish pilot and the clumsiness of his rival.

As expected, the mainstream media of the Russian Government have silenced the explanation of NATO. Russia Today has not published it. In turn, Sputnik News has only reported this in its Polish and Italian edition, but in the Polish edition it omits Lungescu’s explanations about the transponders turned off and the lack of flight plan of the Su-27, and collects only NATO spokeswoman’s objection to the unsafe maneuver made by one of the Russian planes. However, the reference to transponders does appear in the Italian edition of the Russian media: why have they omitted it in the Polish edition? On the other hand, Sputnik News explains that dangerous maneuver by stating that the Su-27 “did not allow the F-18 to approach the plane with the minister, pulling it away.” One might wonder if it is legitimate for the editors of that medium that a Russian fighter get in the way of a Spanish plane’s flight, with the consequent risk of collision. Best of all, the Russian media itself repeats the video in which the EF-18 is observed avoiding collision. Lies have very short legs.