Russia has spent many years promoting any movement that serves to destabilize the West, especially the separatism and the extreme left.

These Russian destabilization plans have had their most extreme cases in Georgia and Ukraine, but have also been directed against other countries. Without going any further, Russia supported Catalan separatism in Spain, offering economic and even military aid one day before the separatist coup of October 1, 2017. At this point it is clear that Russia wants a weak West in conflict with each other, and some Russian nationalists are already openly displaying their dreams about it.

In the last few hours, Russian Internet users are viralizing a map published on Thursday by a Russian Telegram channel. The map, released in Russian and English, is cynically titled "Decolonization of Europe", and it assumes the theses of separatist groups from various European countries, proposing a Europe from which all current countries, with a few exceptions, will disappear. 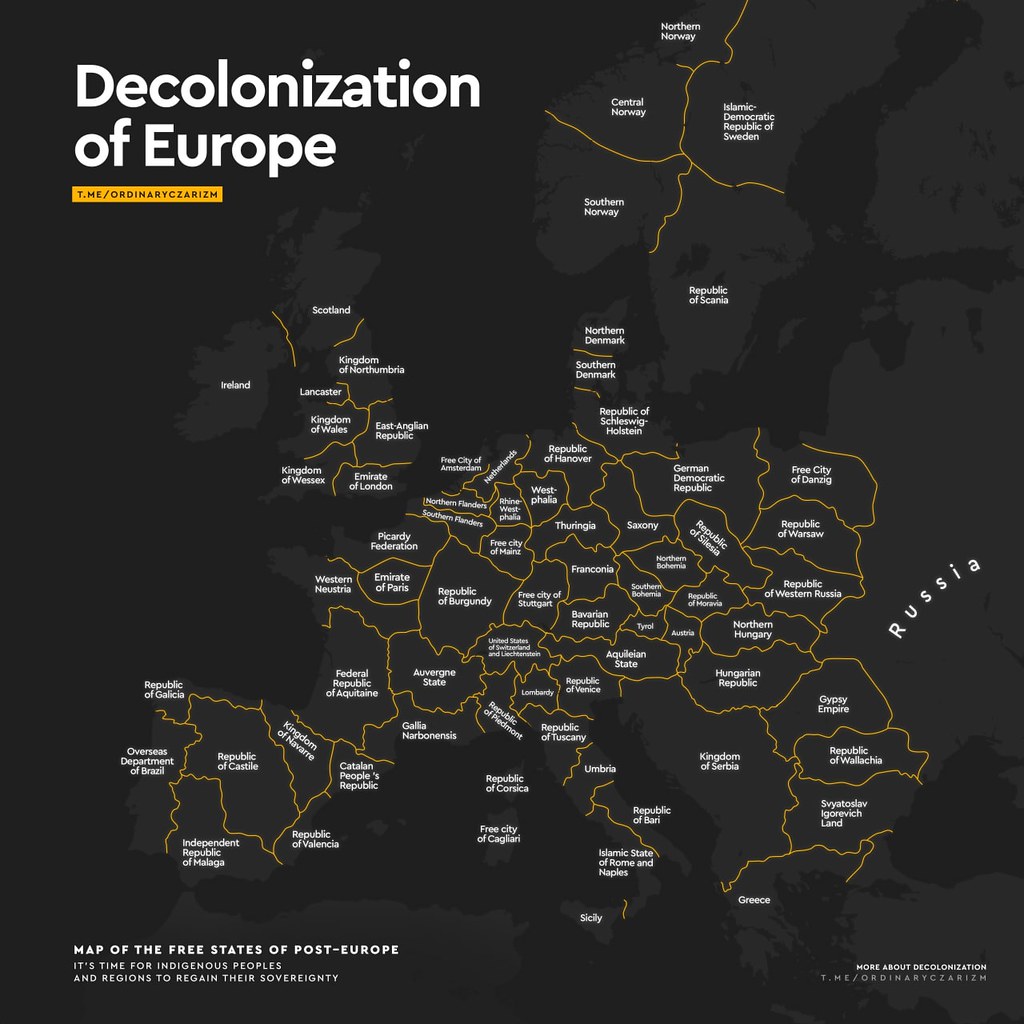 In that image (you can see it on these lines), countries like Spain, France, Poland, Germany, Italy and the United Kingdom are deleted from the map. In fact, only four of the European countries would remain: Greece, the Netherlands, Ireland, Serbia and Russia. These last three would also be the only ones that would expand their borders. And it is that the idea of "decolonization" that Russian imperialism has to annex Finland, Estonia, Latvia, Lithuania, Moldova, Ukraine, Belarus and part of Poland to Russia. Serbia, whose government is close to the Putin regime, would also annexed Croatia, Slovenia, Bosnia-Herzegovina, Montenegro, Albania and North Macedonia. Calling this "decolonization" is another example of the well-known cynicism of Russian propaganda.

In the case of Spain, the Russian imperialists want Asturias and Cantabria to be annexed by Galicia. Extremadura would be a colony of the "Independent Republic of Malaga" (it would no longer be called Andalusia) and Murcia would be annexed by the "Republic of Valencia". Aragón, La Rioja and the Basque provinces would be annexed by the "Kingdom of Navarra", while Catalonia would maintain its current form, but become a "People's Republic" in the communist style. The two Castillas and Madrid would become the "República de Castilla", landlocked.

Without leaving the Iberian Peninsula, the map maintains the borders of Portugal, but turning this country into the "Overseas Department of Brazil". Is this decolonizing? Would the pro-Russians of the Portuguese Communist Party be happy with this payment for services rendered to the Kremlin?

What the creators of that map do not explain is with what magic wand they intend to achieve those objectives. Russia has been stuck in Ukraine for five months, suffering huge losses for meager gains, showing that its armed forces are incapable of completely taking over a country with far fewer resources than its own. And those clowns intend to change the map of Europe as if that were as simple as playing Risk. This gives us an idea of how far Russian nationalism is from reality. They should stop abusing vodka, because it is beginning to damage their already few neurons.

On the other hand, the authors of this crazy map exhibits a phenomenon known in psychology as projection, and which consists of attributing one's own defects to others. Its authors state that "the European imperialists have suppressed independent identities, they have assimilated them, they have kept them captive", at the same time that they seek to recover the old borders of the Russian Empire, which disappeared precisely because many peoples they were subjected to his boot against their will. The strange thing is not that in Russia there are cretins who subscribe to this ridiculous world view. The really absurd thing is that there are Westerners who claim to love their respective countries and at the same time applaud that Russian imperialism bent on destroying them.