The Spanish left imposes its vision of history and calls it "democratic memory", while extolling leftist criminals with streets and monuments.

A town governed for years by the extreme left

One of the most scandalous examples of this practice is in Badolatosa, a town of about 3,000 inhabitants in the province of Seville. Until 2011, this town was governed by the extreme left coalition Izquierda Unida (IU), an electoral brand created in 1986 by the Communist Party of Spain (PCE) and which is currently part of the coalition government headed by the socialist Pedro Sánchez. Since 2011, the socialists of the PSOE have governed that town by an absolute majority. Since 2003, in this town there has not been a single councilor from center-right parties (the last was one from the Popular Party, elected in the 1999 local elections). 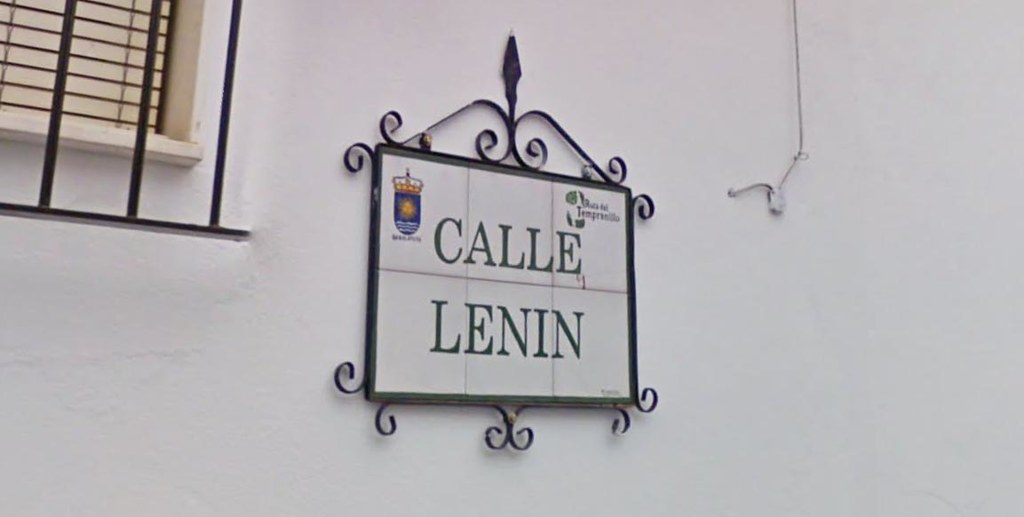 The original sign of Calle Lenin de Badolatosa, removed by order of the municipal government in 2016 (Photo: Google Street View).

In the first local elections held in 1979, the PCE obtained 6 of the 10 local councillors, which became one of the sites of reference for the Spanish extreme left. The communist local government imposed its particular street without any shame, dedicating a street to the communist dictator Lenin, whose terror regime murdered more than a million people for political reasons between 1917 and 1924, and it was also responsible - through its grain requisitions and land confiscations - for famines that killed between 3.9 million and 7.75 million Russians, Kazakhs and Tatars. 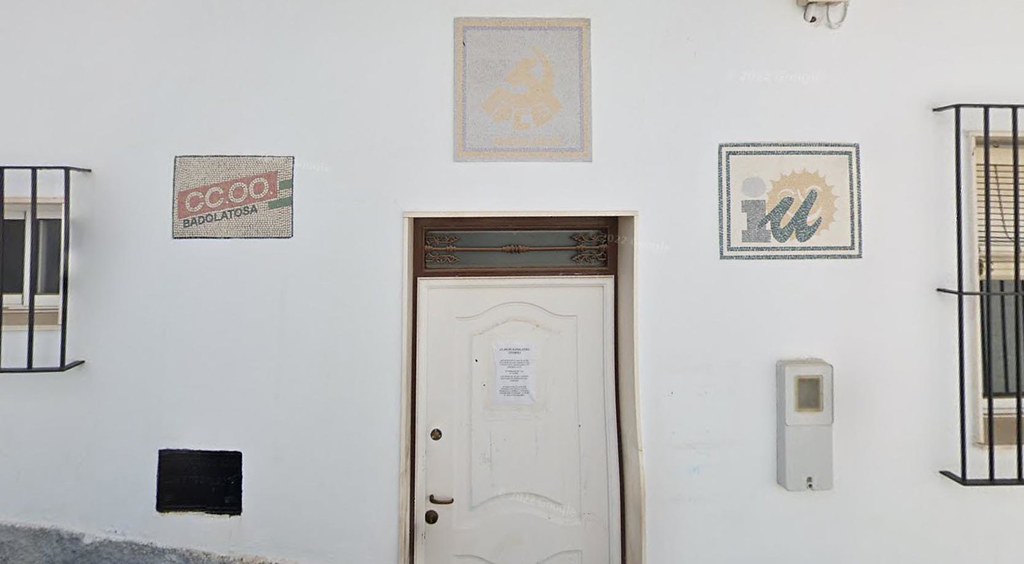 The local headquarters of the PCE, Izquierda Unida and the communist union Comisiones Obreras in Badolatosa. It is located precisely on Lenin Street (Photo: Google Street View).

It so happens that the local headquarters of the PCE is located precisely on that Lenin Street. Its emblem, with the hammer and sickle, is represented with a mosaic on the door. On the sides, two other mosaics show the logos of Izquierda Unida and Comisiones Obreras, a union linked to the PCE since its foundation. The old Lenin Street sign was located on the wall of this communist place, between two of its windows. 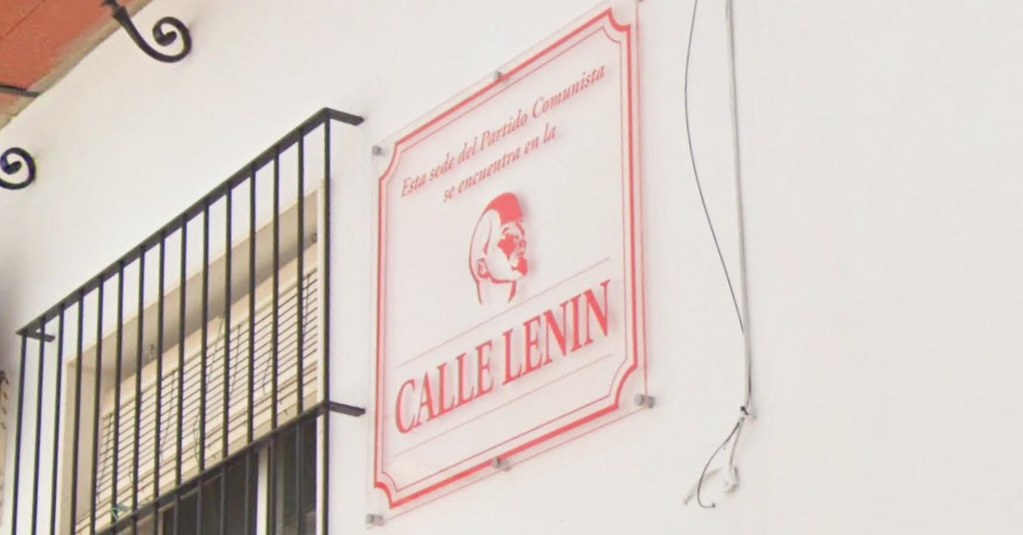 In April 2016, the local socialist government decided to remove Lenin Street, claiming that the Soviet dictator the "dubious morality" of the honoree. The municipal plenary approved, with the opposition of the local communists -who were furious with that decision-, that the street recover its original names of "Cuesta Virgen del Carmen" and "Calle Lucero" in its two sections. In rejection of the municipal agreement, the PCE placed a new sign near where the old one was, which reads: "This headquarters of the Communist Party is located on Lenin Street", next to a portrait of the Soviet dictator. 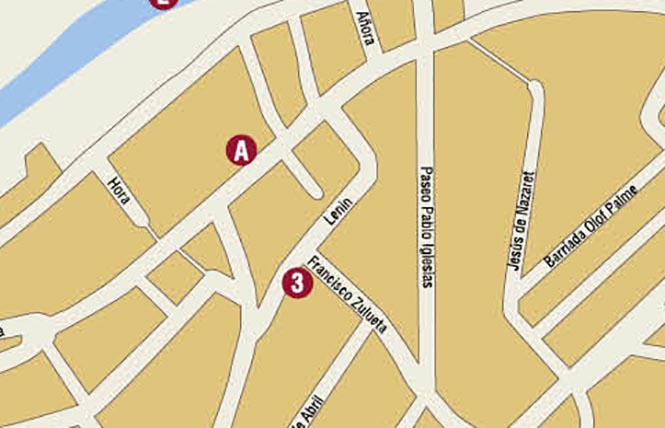 A fragment of the tourist map that appears on the Badolatosa City Council website. Lenin Street continues to appear six years after the municipal plenary approved its removal (Photo: Ayuntamiento de Badolatosa).

Despite the municipal agreement approved by the socialist local government in April 2016, and although a "Cuesta Virgen del Carmen" sign was placed at the beginning of the southern section of the street (the closest to the PCE headquarters), on the Badolatosa City Council website there is only a reference to the new street name: a brochure for Holy Week 2022. However, in the the tourist map that appears on the City Council website still indicates Lenin Street. 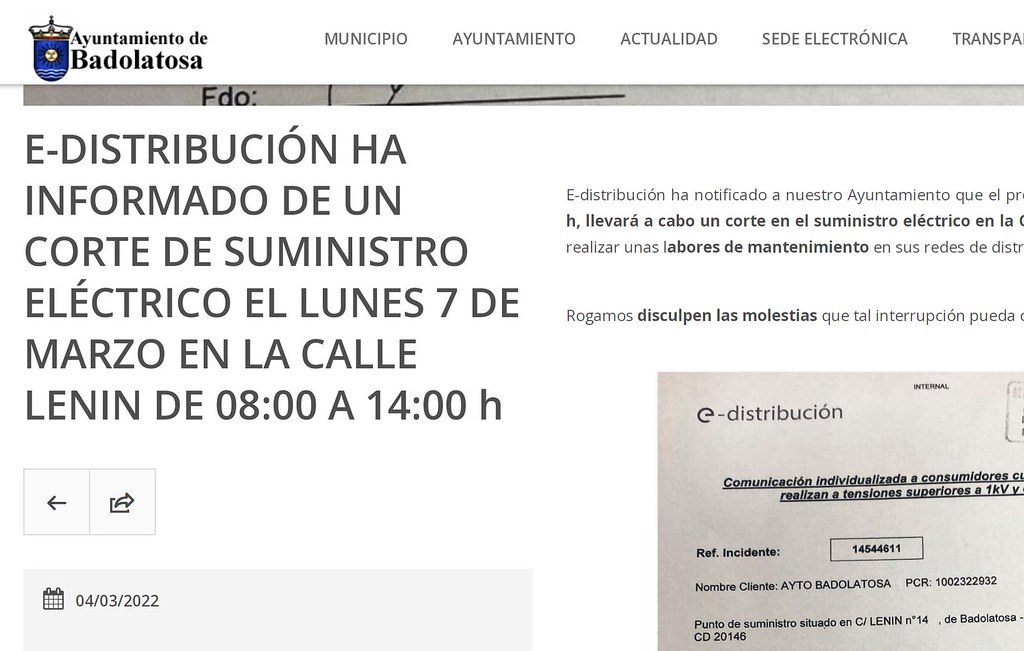 A notice published by the website of the Badolatosa City Council on March 4, 2022 in which it speaks of "Lenin Street" six years after the municipal plenary approved the removal of that street (Photo: Ayuntamiento de Badolatosa).

Likewise, on March 4, 2022, the City Council published a notice with the following text: "E-distribución has notified our City Council that on March 7, from 08:00 to 14:00, it will carry out a cut in the electricity supply in Lenin Street." In other words, six years after that socialist municipal agreement to remove the Soviet dictator from the street, the municipal government maintains it on its website. Let us remember that in 2021, the socialists of the PSOE voted together with the communists against a condemnation of the crimes of the communist dictatorships in the Spanish Parliament. It is the same left that boasts of "democratic memory".