The furthest car park: the three wheeled vehicles that were abandoned on the Moon

It is difficult to say exactly how many wheeled vehicles there are on Earth: an estimated 1.4 billion. On the Moon it is easier to count them: there are only three.

These three vehicles were transported to the Moon in the last three missions of the Apollo program. They were folded in the lunar descent modules, with dimensions of 90 centimeters high, 150 wide and 170 long. The vehicles had four wheels and weighed 209 kg, being able to transport two seated astronauts and a total load of 700 kg, and they had an electric motor with which they could reach a maximum speed of 14 km/h. As with the descent modules that carried them, the three vehicles were abandoned on the Moon at the end of their missions. Let us now see what they were and where they were abandoned.

LRV-1: the first wheeled vehicle on the Moon

LRV-1 was the first wheeled vehicle on the Moon. It arrived on our satellite in the Apollo 15 lunar module LM-10 Falcon on July 30, 1971. This vehicle carried a plaque with this inscription: "Man's First Wheels on the Moon, Delivered by Falcon, July 30, 1971" of 1971). Here we can see a NASA photo (the AS15-88-11901) taken by mission commander David R. Scott, showing us the vehicle's final parking spot, at Mons Hadley, in the Apenninus Mountains. It was abandoned there on August 2, 1971. 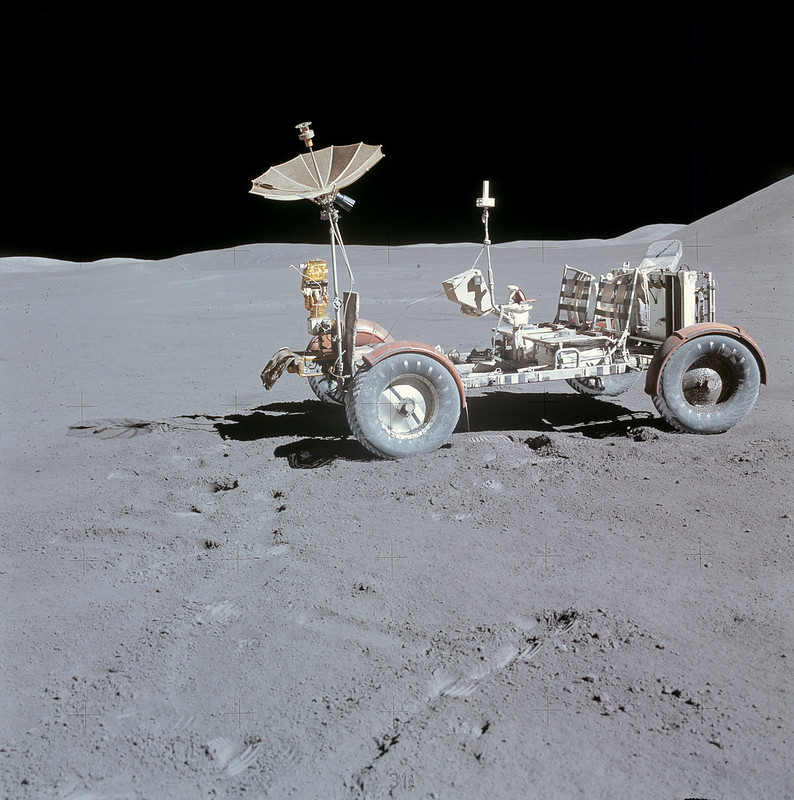 The first driver of a wheeled vehicle on the Moon was American astronaut James B. Irwin (1930-1991). After landing on the moon, he said, "I felt the power of God as I'd never felt it before." Here we can see another NASA photo (AS15-88-11900) showing the LRV-1 console. As a curiosity, the seat that Irwin was occupying appears broken because he sat on it with his backpack on. This vehicle traveled a total of 27.76 km during a time of 3 hours and 2 minutes. Its longest journey was 12.47 km, and the maximum distance it was from the lunar module was 5 km. 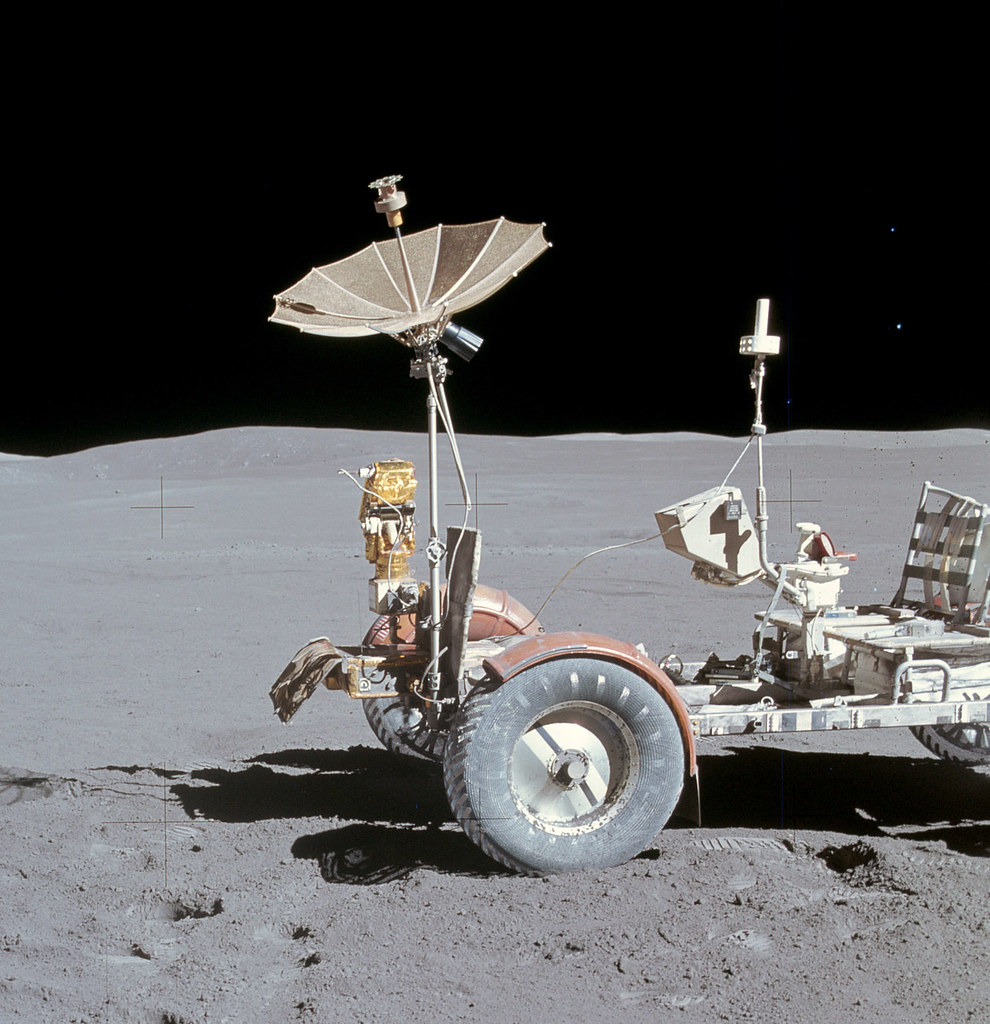 LRV-2: the second wheeled vehicle on the Moon

The LRV-2 reached the Moon on April 21, 1972 aboard the Apollo 16 lunar module LM-11 Orion. It traveled the least distance of the three lunar rovers: 26.55 km , for a time of 3 hours and 26 minutes, its longest journey being 11.59 km and moving away from its lunar module up to a distance of 4.5 km. Here we can see a NASA photo (the AS16-108-17729) showing the place where it was abandoned: the Descartes Highlands, the landing site of this mission. In the photo we see the mission commander, John Watts Young, next to the vehicle. 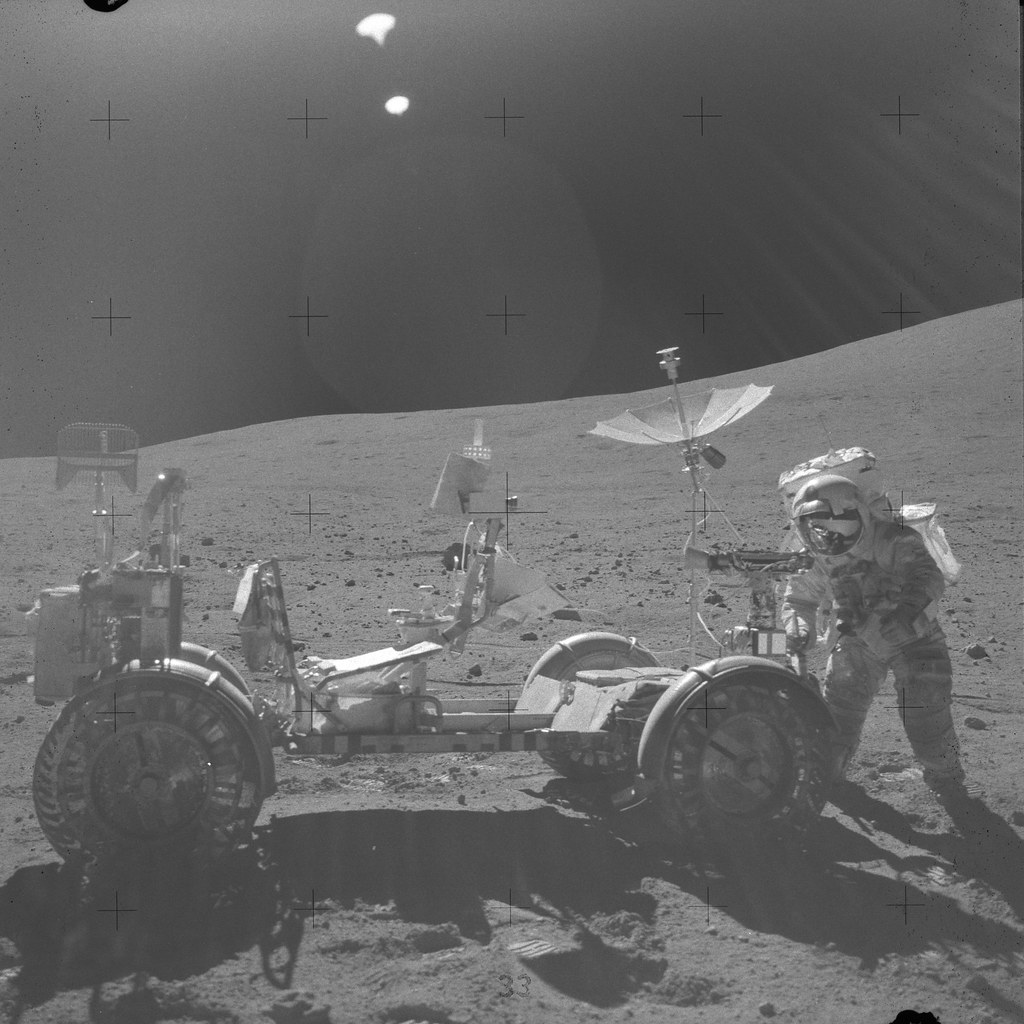 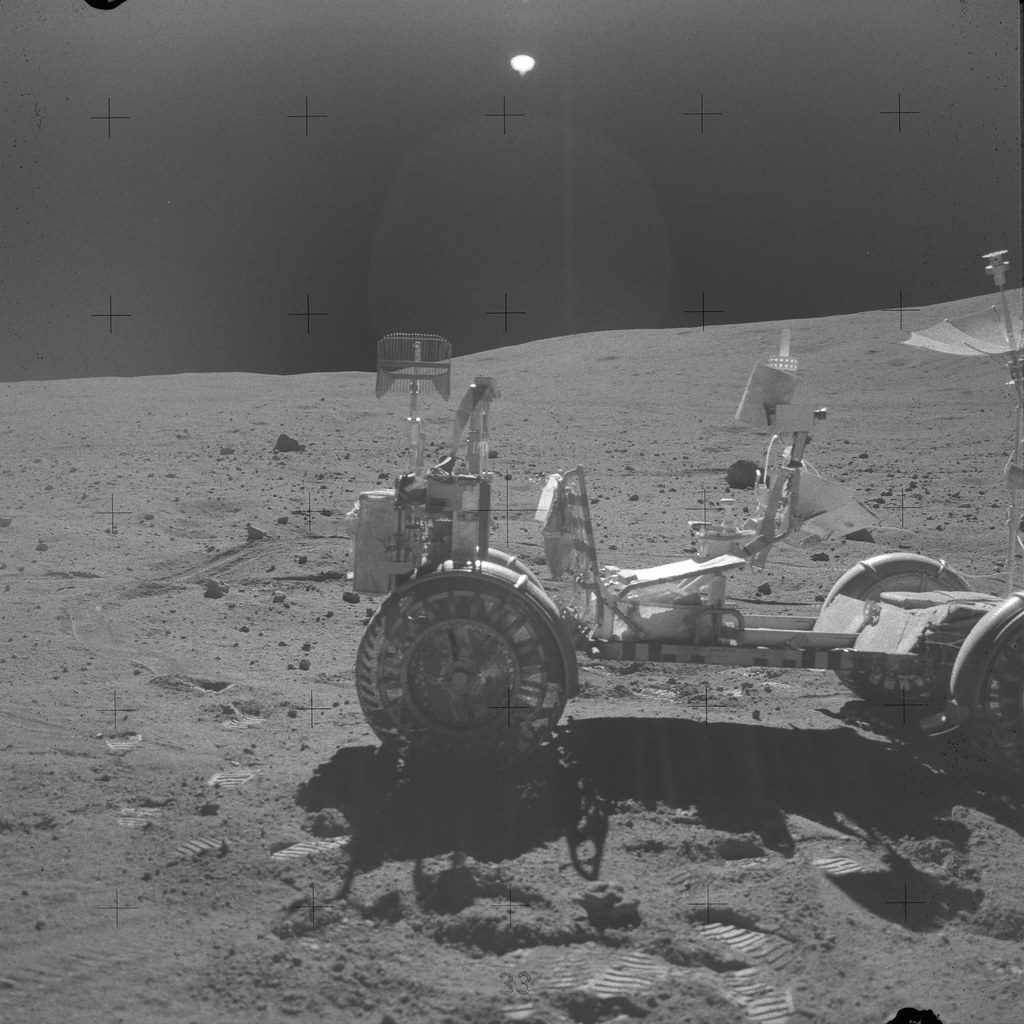 LRV-3: the third and last wheeled vehicle on the Moon

The LRV-3 reached the Moon on December 11, 1972 aboard the Apollo 17 Lunar Module LM-12 Challenger. It was the most traveled of the three lunar rovers: it traveled 35.89 km during 4 hours and 26 minutes, its longest journey being 20.12 km and moving up to 7.6 km away from the lunar module. It was abandoned at the landing site of this mission, Taurus–Littrow, on December 14, 1972. In a few days it will be the 50th anniversary of its abandonment there. Here we can see a NASA photo (the AS17-143-21932) with its final parking space. 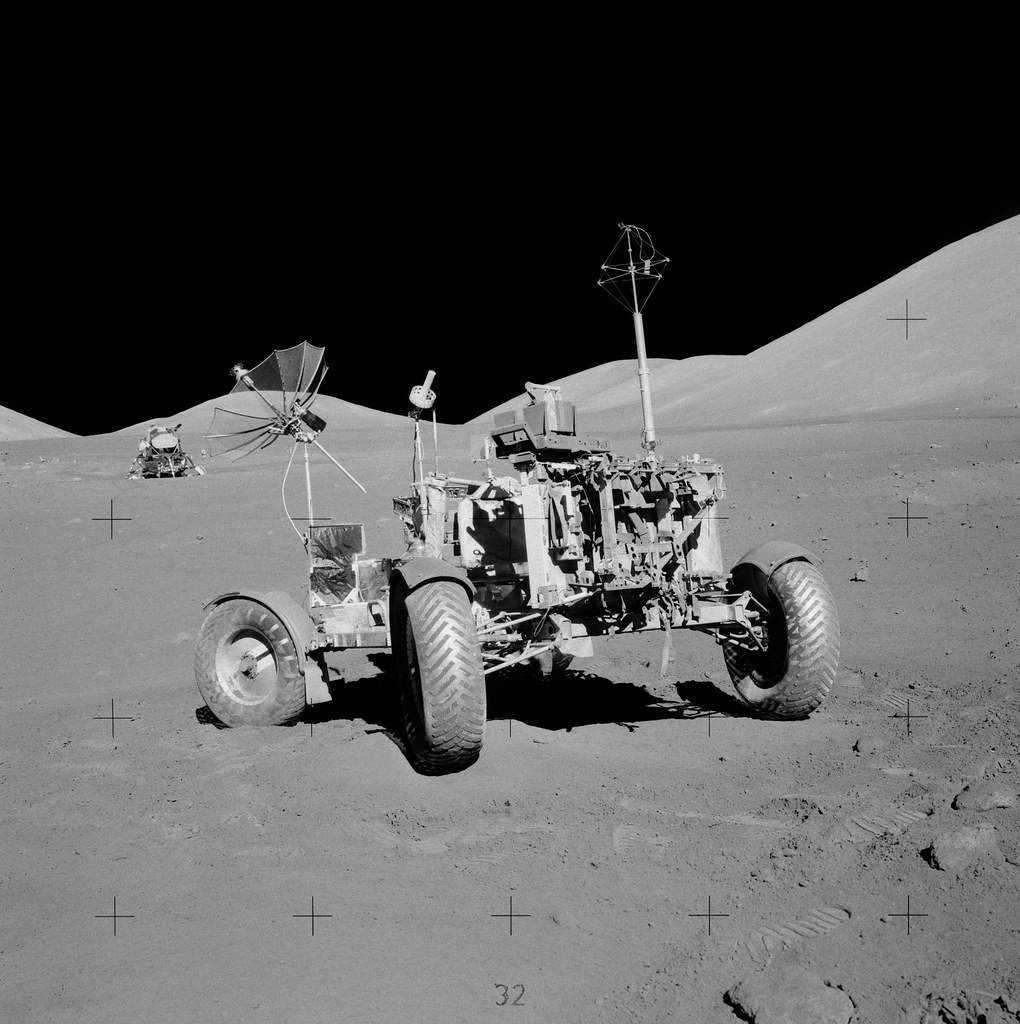 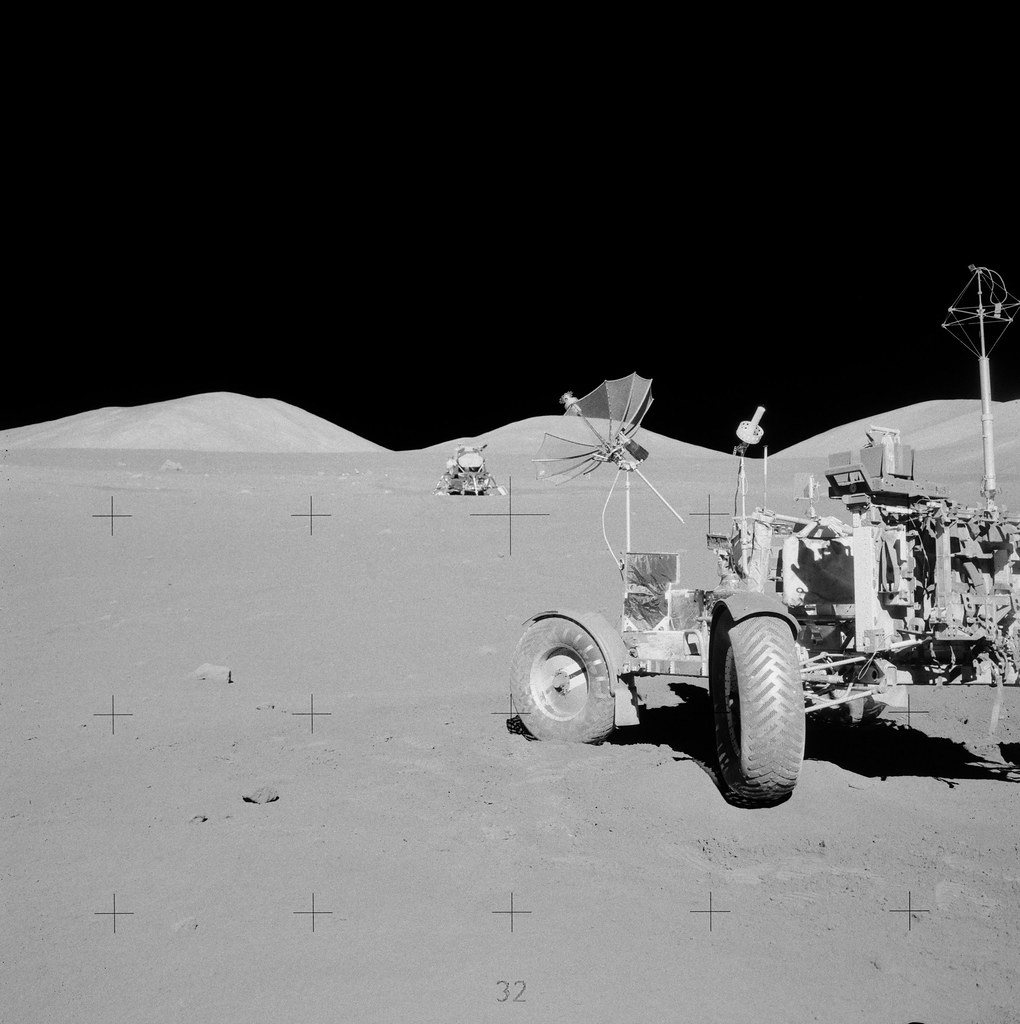 On May 21, 2010, NASA's Lunar Reconnaissance Orbiter took this photo of the Apollo 17 landing site on the Moon (NASA photo, reference A17M129086118L). It shows the place where the lunar module (LM) and the rover (LRV) were abandoned. 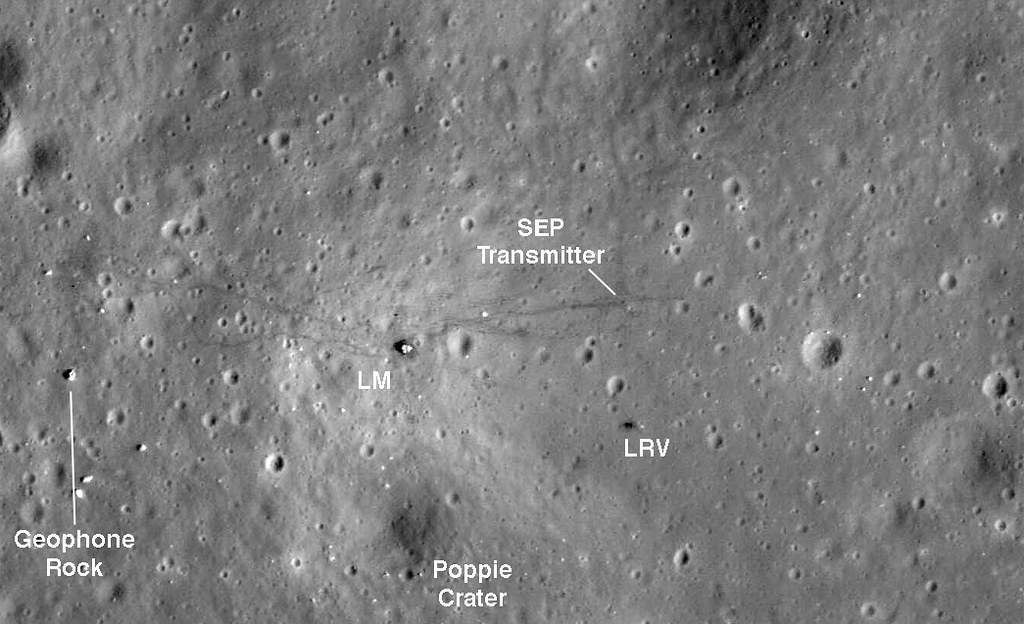 It is not known what the current state of the three rovers will be, but if nothing terrible has happened, they will still be there 50 years later.

Lead photo: United States National Archives. The LRV-3 taken to the moon on the Apollo 17 mission.