Janet: an airline with which you will never fly to a place that they claimed did not exist

If you travel to Las Vegas, in the US, and pass through the McCarran International Airport, you may see some mysterious airplanes without livery and that only show a red band on its fuselage.

An airline whose flights sometimes have unknown origin and destination

This airline is known for its radio call sign, “Janet”, but its real name is unknown. It operates six Boeing 737-600, a plane that can be found on any other airline, in addition to five turboprop twin-engines. Like any other airline, you can know your flight schedules. For example, in Flight Radar you can see the flights that your 737 has recently made with N859WP registration, and those of the N288DP: they only fly between Las Vegas and Tonopah, in Nevada. More mysterious are the flights of the N365SR: it also makes trips between Las Vegas and Tonopah, but many of its flights have unknown origin and / or destination. In fact, it is said that its call sign “Janet” comes from the acronym “Just Another Non-Existent Terminal”. Below these lines you can see one of those 737 of Janet, the N288DP, taxiing on the McCarran airport tracks in a video published by LAX Videography and Spotting in July 2014:

The registration of these airplanes offers a revealing data and that makes clear that we are not before an ordinary airline: the aircraft are owned by the Department of the United States Air Force. Another difference with the other airlines is that almost everyone who reads these lines will never fly with Janet. In fact, it is very unlikely that you will ever visit the exclusive terminal that you have at the McCarren airport, which has its own parking lot and is guarded by heavily armed personnel. For that terminal (you can see it under these lines and clicking here on Google Maps), which is accessed from Haven Street, hundreds of people pass every week. Where do they travel? 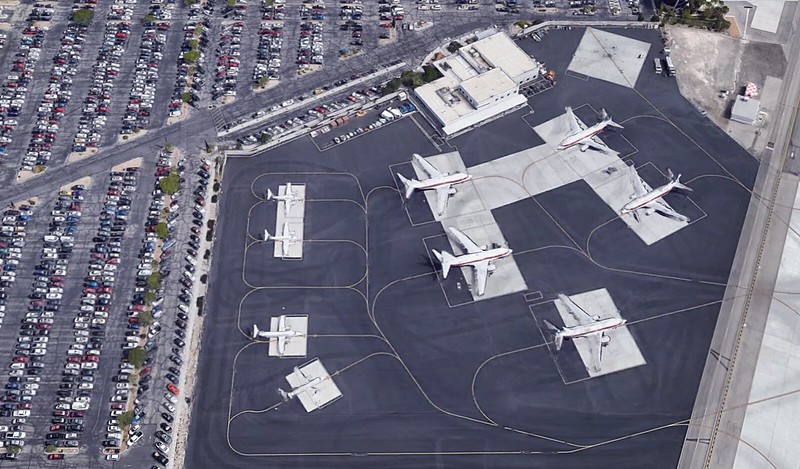 One of Janet’s destinations is the famous Area 51

Since 1972, Janet has been transporting Air Force employees from the McCarren airport to the Groom Lake military base, on a large dry lake, and to the Tonopah Test Range, both in Nevada. Maybe these names do not sound like you, but you may be familiar with their nicknames: Area 51 and Area 52, respectively. The first of these bases is associated in popular culture to UFOs, but it is also related to the test flights of Skunk Works, the division of Lockheed Martin that for decades has designed and built several top-secret aircraft for the USAF, from the SR-71 to F-117, both tested on this base. Although the area is forbidden access, the existence of Area 51 was a mystery for decades. It was often denied by official bodies, until in 2013 the CIA declassified a document mentioning that base.

The requirements to fly with this exclusive airline

To be able to fly with this line, you would have to be one of the employees of the USAF who travel to these secret facilities. But even being in this situation, before you can access Janet’s terminal, you will be subjected to a rigorous personal investigation of what you have done in the last 10 years, your possible criminal records, the people you live with and your immediate family members, what has been your education, your jobs, they would ask your neighbors and the Police of your locality of residence in search of references, and they would review your income, besides other details. But first of all you would need to have American citizenship. It seems easier to fly with Iberia or with British Arways to any other place, certainly, although at least it is unlikely that Janet will lose your bags.