During the Katyn massacre he personally killed 7,000 Polish prisoners

Vasily Blokhin: This is how the USSR turned the greatest executioner in history into a hero

Nowadays criminals like Mengele and Himmler are world famous. However, Vasily Mikhailovich Blokhin is a great unknown despite being the greatest executioner in history.

The head of a group of torturers and executioners of Stalin 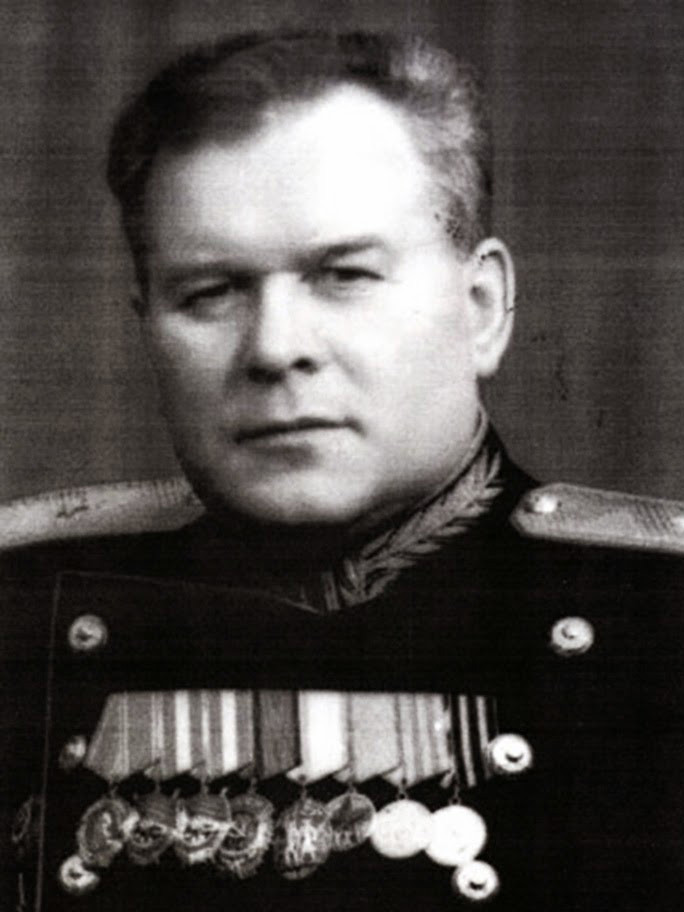 Born in 1895 into a peasant family, Blokhin fought as a noncommissioned officer in the 82nd Infantry Regiment with the Russian Czarist Army during the First World War. Wounded by the Germans, he is transferred to a hospital in Polotsk, where he remains until December 29, 1917, when the Bolshevik Revolution in Russia has already begun, after which Blokhin supports the communists and in March 1921 joins the fearsome Cheka, the political police created by Lenin to persecute, torture and execute all kinds of dissidents.

Blokhin carries out his first execution in August of 1924 in the prison of Lubianka, in Moscow. After winning the favor of Stalin, in 1927 he was assigned to lead the "Kommandatura", a small section of the Executive Administrative Department of the NKVD (the Stalinist political police) in charge of what Stalin defined as "chernaya rabota" (black jobs), that is to say, intimidations, tortures and murders clandestinely and following direct orders of the dictator.

Highlighted in that sinister work for his violence, Blokhin receives the Medal of Honorary Worker of the Cheka in 1932, is promoted to captain in 1935 and awarded with the Order of the Red Star in 1936. He actively participates in the first major Stalinist purge between 1936 and 1938, during which the NKVD receives the Order 485 from Stalin, a secret order that provokes one of the greatest ethnic massacres perpetrated by communist dictatorships: the mass elimination of the Polish minority living in the Soviet Union, a massacre that not only includes the Polish population of the border regions, but also the Polish socialists and communists who had taken refuge in the USSR and the Polish prisoners of war who had been captured in the Polish-Soviet War of 1919-1921 and who did not They had been released. Because of that Stalin order, more than 100,000 people are killed.

For his services in that first great purge, Blokhin is awarded the Order of the Insignia of Honor. Among the executions carried out personally are those of early Bolshevik leaders such as Lev Borisovich Kamenev and Grigori Yevséievich Zinoviev (both murdered on August 25, 1936), Mikhail Nikolayevich Tukhachevsky (assassinated on June 12, 1937), the writer Isaac Babel (assassinated on January 27, 1940) and Nikolai Ivanovich Yezhov (the leader of the NKVD between 1936 and 1938, assassinated on February 4, 1940). In 1940, Blokhin is promoted to commander of State Security. That same year he will get his most macabre record in a famous slaughter. 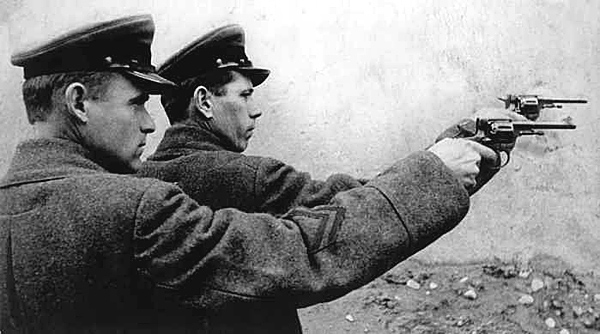 Members of the NKVD with revolvers Nagant M1895

Blokhin's participation in the massacre of Polish prisoners

On March 5, 1940 Lavrentiy Pavlovich Beria, head of the NKVD, receives from Stalin a new secret order again directed to exterminate thousands of Poles. This time the victims are thousands of policemen and officers of the Polish Army captured after the Soviet invasion of Poland in September 1939. Blokhin is designated as one of the main organizers and executors of this massacre, which begins on April 5, 1940 in the NKVD prison in Kalinin, where thousands of officers of the State Police and the Polish Border Protection Corps are murdered en masse, who are later buried in mass graves in Miednoje.

Blokhin prepares these murders with great care and industrially. Executions are carried out using German Walther pistols and German ammunition supplied by Moscow (the Germans had delivered them in large numbers to their Soviet allies in the invasion of Poland), for three reasons: the first is that Blokhin does not believe that their statutory Soviet pistols, the Tokarev TT-30, support the rhythm of 300 executions per night that had been marked by the executioner of the NKVD; the second reason is that the Walther has less recoil than the TT.30, which would make the executioner's job more comfortable; the third reason, and the most important, is that the Walther is the statutory weapon of the Gestapo (the German secret police), so that if the burials are discovered, the Soviets will be able to deny any involvement and blame the Germans based on the ballistic tests. 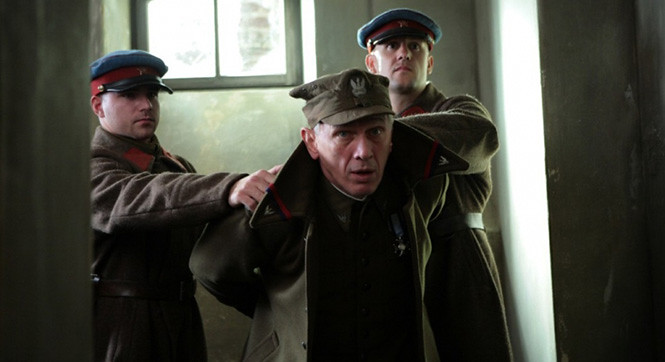 Frame of the Polish film "Katyn" (2007). This film shows the procedure followed by Blokhin to execute the Polish prisoners. In this image we see two members of the NKVD leading a Polish Army officer to the execution room.

The procedure of executions organized by Blokhin

The prisoners are transferred to an enclosure specially designed by Blokhin to carry out the murders. First they are introduced to a 5-by-5-meter anteroom called the "Red Room" or "Lenin's Room", with the walls painted red, with several propaganda posters and a plaster statue with the image of Lenin. In that room, each prisoner is identified (his name is asked and his date of birth is noted) and he is handcuffed. They are then led into an adjoining room with the sandbag-cushioned walls to muffle the sound of the shots and the prisoners waiting outside will not listen to them (noisy machines are also used to mask the shots). This execution room has a hose and has the floor tilted towards a drain to easily clean the blood.

Behind the door, Blokhin himself waits for each prisoner dressed in his executioner's attire, as if he were a butcher: a long leather apron, brown leather gloves that cover him up to the elbows and a brown leather hat. Without further ado, each prisoner is held and knelt by two NKVD guards while Blokhin shoots him at the base of the skull with his Walther Model 2 pistol, pointing the barrel upwards to make sure that the bullet goes out through the mouth or through the eyes, so that the mortal wound generates less blood. The corpse is removed by another door located on the opposite side of the room, loaded on trucks (each vehicle carries between 25 and 30 corpses, covered with a tarpaulin) and taken to a common grave. Each night between 24 and 25 trenches are opened with an excavator to bury the bodies of the murdered.

This procedure is followed in 10-hour shifts for 28 nights, at a rate of one execution every 3 minutes. Blokhin personally executes 7,000 Polish officers, becoming the greatest executioner in history. When this "job" ends, he and his team celebrate with a goodbye drink. For this massacre, Blokhin is secretly decorated with the Order of the Red Flag, receiving a monthly premium equivalent to his salary. Other members of his team of executioners receive, as a reward, a revolver, a bicycle or a gramophone, according to Dmitry Tokarev, one of the members of that team of executors, years later. The Walther pistols used in the massacre are handed over to Blokhin, who keeps them as part of his personal collection. 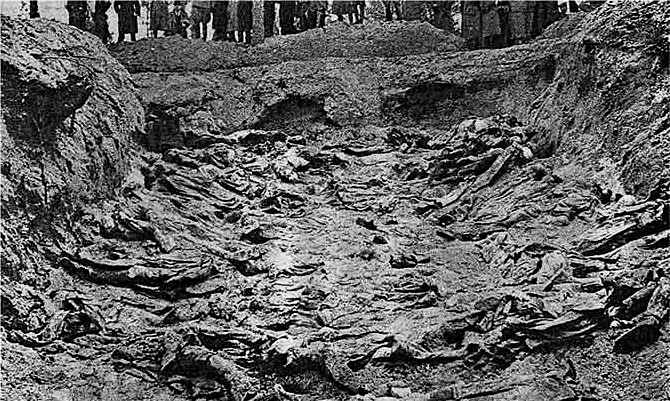 One of the mass graves with the corpses of the Polish prisoners murdered in Katyn, after their discovery by the Germans in 1943

The USSR denied the truth about the Katyn massacre until 1990

Between April and May 1940, 22,000 Polish officers, police, officials, priests and intellectuals - including 50 women - are killed in Kalinin, Kharkiv and Katyn forest, in a clear attempt to exterminate the intellectual dome of the Republic from Poland. In some of the places of execution, the Polish prisoners are killed by a shot in the neck at the foot of the common grave in which they are buried. In April 1943 the Germans discovered some of those common graves, containing thousands of corpses. The Soviets deny their authorship of the crimes and blame the Germans. Following the discovery of the massacre, the Polish Government in exile, based in London, breaks all relations with the USSR. The Soviet governments and the communists of various countries will continue to deny the true authorship of the massacre until 1990, when Boris Yeltsin acknowledges that the Katyn massacre was perpetrated by the NKVD, declassifying the documents that the USSR had in this regard.

The executioner of the NKVD, turned into a hero of the Soviet Union 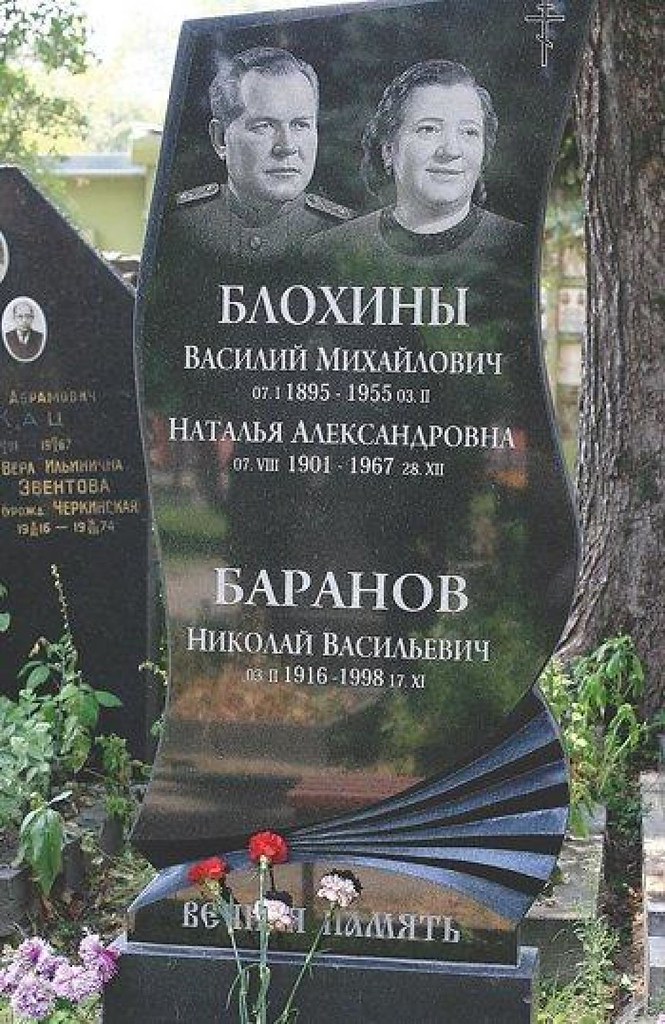 The tomb containing the remains of Vasily Blokhin, his wife Natalia Aleksandrovna Blokhina (1901-1967) and their son Nikolai Vasilievich Baranov in the Novodevichy cemetery, in Moscow (Source: Sovereign Ukraine)

Unlike many other Soviet leaders, Blokhin survives the three great Stalinist purges. He is promoted to colonel in 1943 and to major general of the Security of the State in 1945. To the death of Stalin the 5 of March of 1953, the prolific executioner of the NKVD has turned into a hero of the Soviet Union, showing, among other rewards, the Order of Lenin - the highest civil decoration of the USSR -, the Order of the Patriotic War of 1st class and two medals of the Order of the Red Flag. It also provides a pension of 3,150 rubles in a country where the average salary is 700 rubles. Although on the death of the dictator, Blokhin is praised by Lavrentiy Beria, still head of the NKVD, things start to change: after the defenestration and imprisonment of Beria in June 1953 and the dismantling of the NKVD in Moscow by order of Nikita Khrushchev, the prolific executioner is also defenestrated. Blokhin is stripped of his rank, eight of his decorations and his pension, and sinks into alcoholism and madness, dying on February 3, 1955 (the official cause was "suicide"). He is buried in the Muscovite cemetery of Novodevichy.

After the end of the mandate of Nikita Khrushchev in 1964, Blokhin is rehabilitated by the USSR, and his rank and medals are returned to him posthumously. To this day, his portrait decorates the tomb in the Novodevichy cemetery, in uniform, as if he were a hero. Neither he nor the others responsible for the Katyn massacre were ever prosecuted for their crimes. Many communists still deny the Soviet authorship of the Katyn massacre, just as they continue to deny the other crimes committed by communist dictatorships. Crimes that many western countries still do not recognize at the official level, openly allowing genocide as Lenin and Stalin continue to be extolled. Do you understand now why Vasily Mikhailovich Blokhin is still unknown to many people?

(Main picture: Frame of the Polish film "Katyn" (2007) showing the method of execution followed by Vasily Blokhin in Kalinin)