Vox accuses Sánchez of "financing Putin's war" with these imports

The betrayal of Pedro Sánchez to Ukraine: Spain increased the purchase of Russian gas

The socialist Pedro Sánchez is one of the least reliable European leaders and with the greatest propensity to lie. He has also done it in relation to Ukraine.

Sánchez promised Zelenski "all the help that is in our hands": he lied

On April 21, during his visit to Kiev, Sánchez said to Volodímir Zelensky "our full support for Ukraine" and promised "all the help that is in our hands." But as often happens with the words of the Spanish socialist leader, he was not telling the truth. Spain is one of the few large countries in the European Union that has not sent heavy weapons to Ukraine (neither cannons, nor tanks, nor armored vehicles). This week, in addition, Sánchez's betrayal of Ukraine in the energy field has become known.

On May 24, at the World Economic Forum in Davos, Sánchez offered Spain as an alternative to Europe's dependence on Russian gas, appealing to renewable energies. Once again, reality belied his statements. The digital newspaper Libre Mercado points out today that Spain increased its purchase of Russian gas by 52% just after Sánchez's visit to Zelenski. This information is not an estimate, but is based on reports published by Enagás, the company that performs the function of technical manager of the gas system in Spain.

Russian gas import in May 2022 exceeds that of previous years

Enagás' monthly statistical bulletins can be viewed by clicking here. This Thursday, June 9, the gas company published its report for May 2022 (see PDF), which indicates that Spain imported 3,289 GWh of gas from Russia, compared to 2,163 GWh in May 2021, an increase of 52%, as Libre Mercado points out. The figure for imported Russian gas in May 2022 is also a 50% increase compared to the 2,192 GWh imported in May 2020, according to the Enagás bulletin of May 2021 (see PDF). 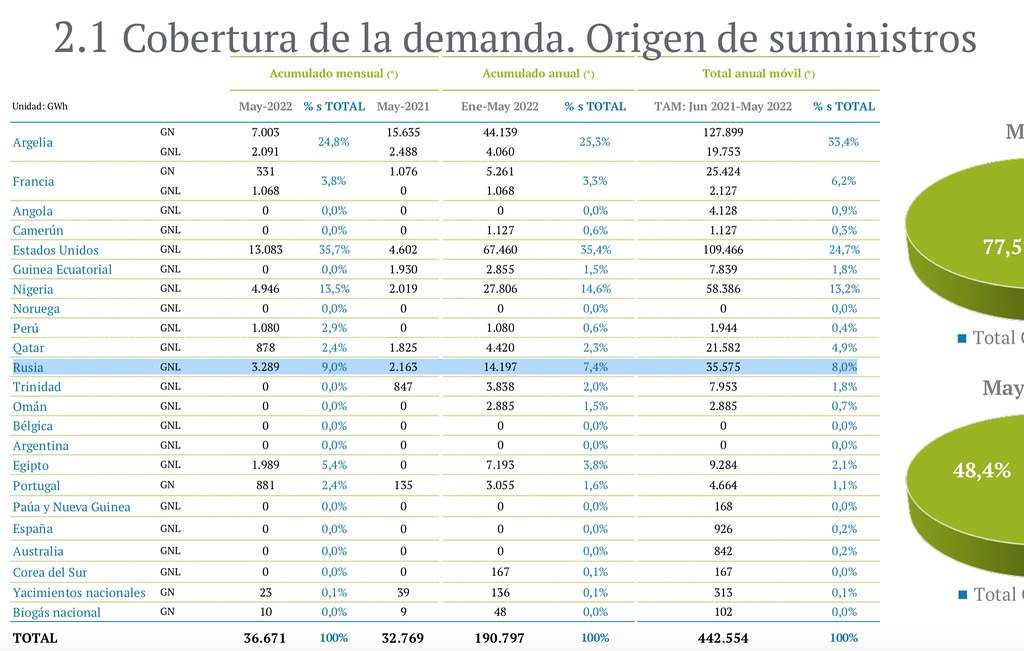 Table with the origin of gas supplies to Spain during the month of May 2022. Click on the image to see it enlarged (Source: Enagás).

The increase in Russian gas imports is not only year-on-year: the Enagás bulletin for April 2022 (see PDF) indicates that in that month Russian gas was 8% of the total imported gas by Spain, while in May it was been 9%. Thus, while Sánchez presented Spain in Davos as the great alternative to Russian gas, Spain began to consume more Russian gas than at the beginning of the war. 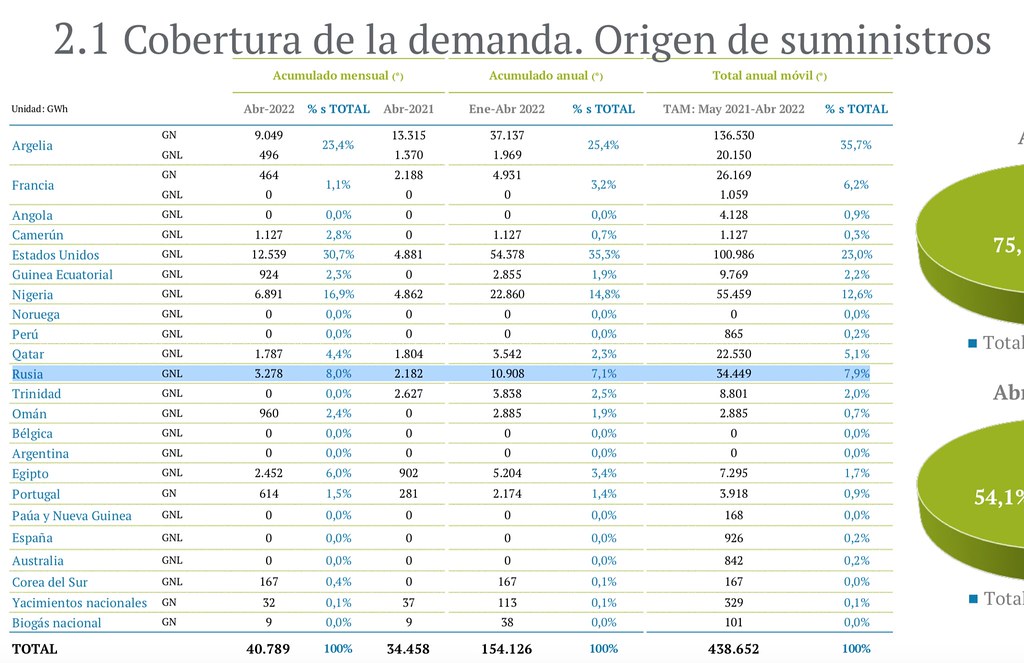 Table with the origin of gas supplies to Spain during the month of April 2022. Click on the image to see it enlarged (Source: Enagás).

In fact, the 3,289 GWh of imported Russian gas in May exceed the 3,277 GWh imported in March, according to data from the Enagás bulletin for that month (see PDF). In March Russian gas was 8.7% of that imported by Spain, three tenths less than in May. What these figures reveal is that Spain has done nothing to reduce its dependence on Russian gas, which instead of decreasing, has increased in the midst of the invasion of Ukraine. 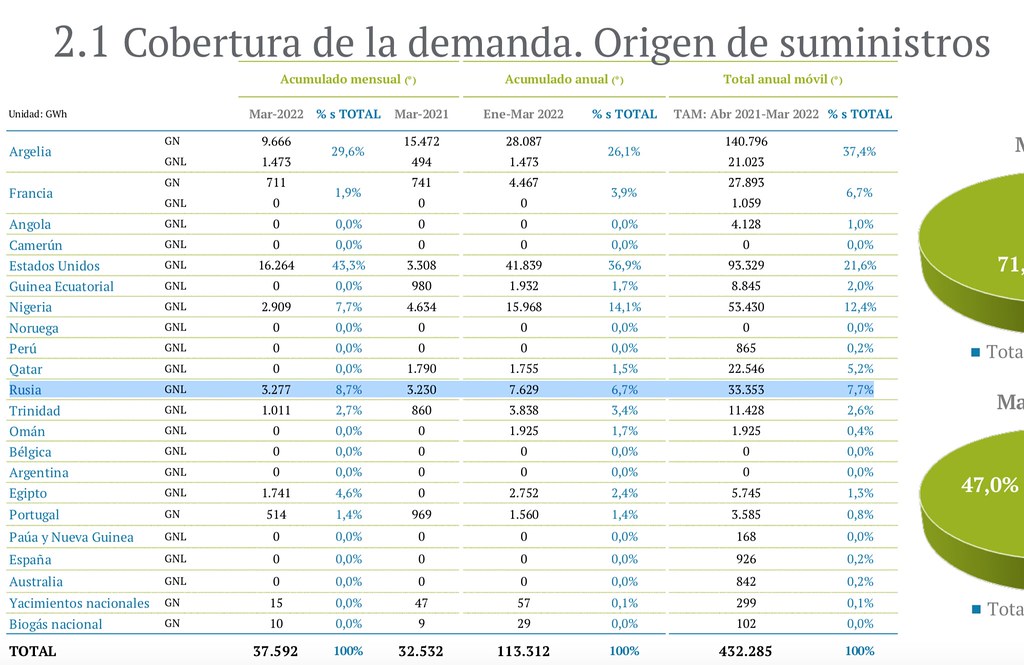 Table with the origin of gas supplies to Spain during the month of March 2022. Click on the image to see it enlarged (Source: Enagás).

These figures are scandalous. After the news of Libre Mercado was published, Santiago Abascal, president of Vox -the third most voted party in Spain-, denounced: "It seems that Sánchez is now preparing to finance Putin's war. One day we will know the reasons why the autocrat has turned our international politics upside down, from the Sahara to the Ukraine. We only know that he does not obey the interests of Spain." It so happens that in March Sánchez falsely linked Vox with Putin, despite the fact that Vox has harshly criticized the Russian dictator and already showed its support for Ukraine before the Russian invasion.

The support of Sánchez's communist partners for Putin's Russia

On the contrary, the one that has shown affinity with the Kremlin is Podemos, the communist partner of the Sánchez government. For years, this far-left party received the support of the Kremlin propaganda media and opposed European sanctions against Russia for the 2014 invasion of Crimea, to the point that that same year the Russian pro-government daily Pravda described Podemos as "pro-Russian party". Likewise, Podemos has used the same anti-Ukrainian rhetoric as the Kremlin, calling the Ukrainian government "neo-nazi" and opposing military aid to Ukraine.

The links of Sánchez's separatist allies with the Kremlin

Let us also remember that Sánchez governs with the support of the separatists who met with an emissary of Putin in 2017, one day before the Catalan separatists began an act of sedition to suspend the validity of the Spanish Constitution in Catalonia. Today we know that Putin promised financial and even military aid to Catalan separatism in this serious attempt to destabilize Spain. These data explain why Spain buys even more Russian gas than at the beginning of the invasion and is one of the European countries that has helped Ukraine the least. Sánchez and his associates seem more interested in a victory for Putin than in the survival of a free and independent Ukraine.

Photo: La Moncloa. Pedro Sánchez with Volodímir Zelenski during the visit of the President of the Government of Spain to Ukraine on April 21, 2022.