Walking through the desert, you can sometimes find very surprising things, as happened recently to some young people in California.

The video of the find was posted last week on the YouTube channel Western Mine Detective, and in it we can see three strategic bombers: a supersonic Convair B-58 Hustler and two Boeing B-52 Stratofortresses.

It should be noted that this place, known as Rogers Dry Lake and located in the Mojave Desert, is well known and it is likely that the young people knew what they were going to find. It is a test field located near the United States Air Force base in Edwards, California, an important military center not only associated with the activity of the USAF, but also of NASA. The B-58 is specifically a prototype: the YB-58A. 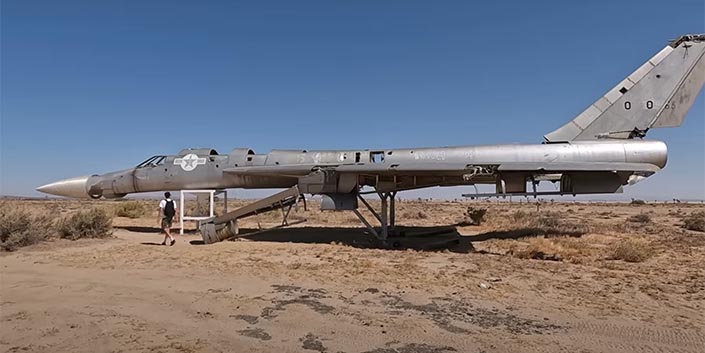 This plane, nicknamed "Snoopy" (it has the famous dog drawn on both sides of its fuselage) and with serial number 55-0665, was equipped with a very long radome in which it housed an AN/ASG-18 radar, in the early 1960s. That radar would later be used on the Lockheed YF-12, predecessor to the famous SR-71 Blackbird. "Snoopy" was also used to test a long-range air-to-air missile, the AIM-47 Falcon, the predecessor of the AIM-54 Phoenix missile that ended up equipping the F-14 Tomcat naval fighters. 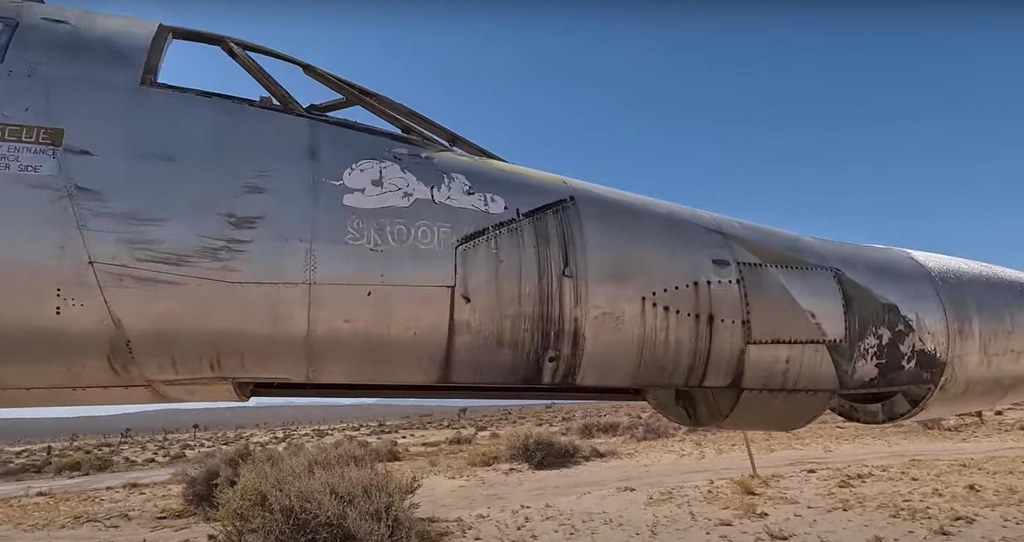 After those tests, "Snoopy" was left in this place, which was a photographic test field. There it continues, out in the open, without engines and without wheels, and increasingly deteriorated.

Nearby there is another very peculiar plane: a Boeing RB-52B Stratofortress, a bomber and reconnaissance version of the famous B-52 strategic bomber. A total of 27 aircraft of this variant were built, which carried electronic intelligence and photo-reconnaissance equipment in a capsule that docked in its bomb bay. Within a few hours, that capsule could be removed so the plane could fly bombing missions. 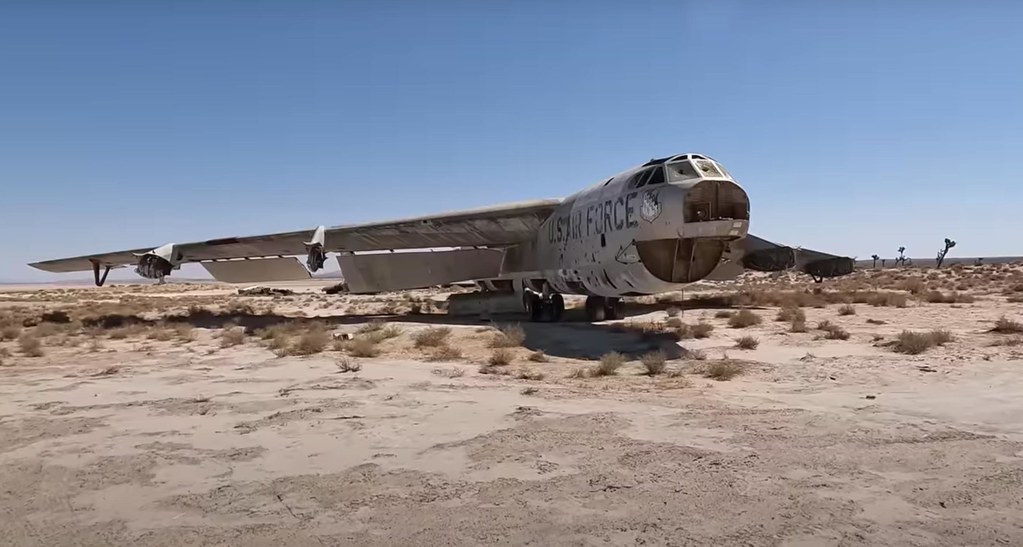 This RB-52B has the serial number 53-0379 and has been abandoned at this location since the 1970s. Interestingly, its fuselage has many bullet holes, as this video capture shows.

A few meters from the RB-52B there is a B-52E that is completely destroyed. This level of damage is not the result of vandalism: the plane was deliberately destroyed in 1991, in compliance with the Strategic Arms Reduction Treaty. 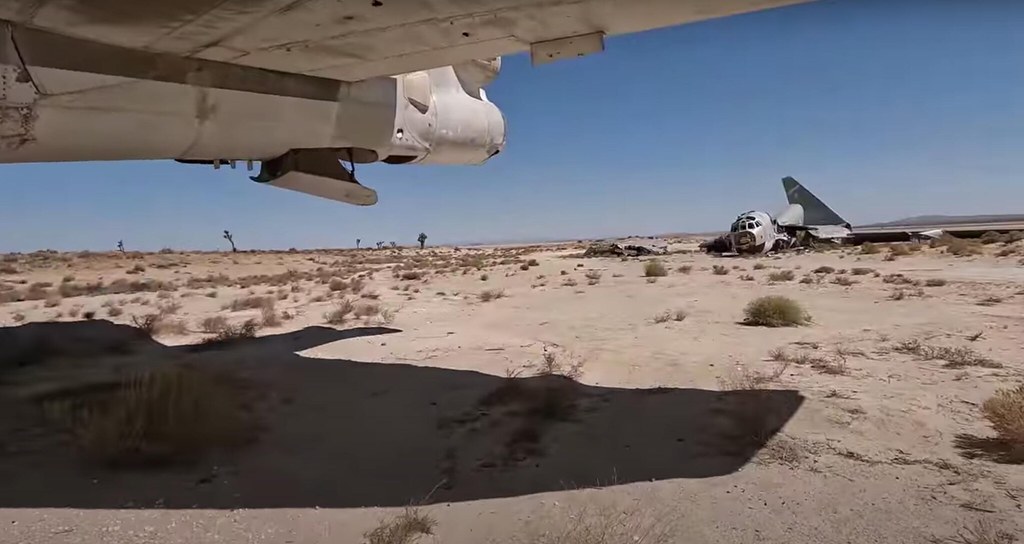 This B-52E has serial number 57-0119. It was used as a test aircraft for the General Electric TF39 engine that was used in the Lockheed C-5 Galaxy. It was moved to its current location in 1980. 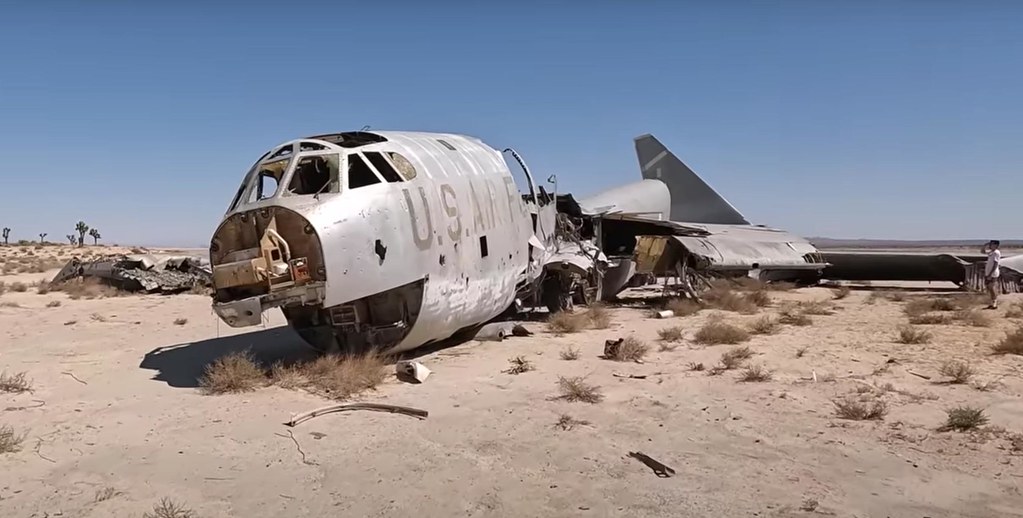 You can see here the location of the YF-58A on Google Maps:

And here the location of the two B-52s: