Spain did not commit any genocide in America: what it did was to end one

One of the historical myths that some repeat with more insistence, especially the far-left, is the alleged existence of a “genocide” perpetrated by Spain in America.

The definition of genocide of the International Criminal Court

Certainly, the conquest and evangelization of America had its lights and shadows, but the historical reality is far from the famous “black legend” created by British and Dutch and today promoted by far-leftists. The historical facts make clear that it is not possible to speak, even remotely, of a Spanish genocide in America, and when I say “genocide” I refer to the definition of the same made by the Rome Statute of the International Criminal Court in its Article 6:

For the purpose of this Statute, “genocide” means any of the following acts committed with intent to destroy, in whole or in part, a national, ethnical, racial or religious group, as such:
(a) Killing members of the group;
(b) Causing serious bodily or mental harm to members of the group;
(c) Deliberately inflicting on the group conditions of life calculated to bring about its physical destruction in whole or in part;
(d) Imposing measures intended to prevent births within the group;
(e) Forcibly transferring children of the group to another group.

The far-left today alleges that Spain set out to annihilate the Indians, an absurd claim. Remember that in 1512, when the first news of mistreatment of the Indians, King Fernando II signed the Laws of Burgos that considered Indians “free men” and the obligation to pay them a fair wage for their work. In 1542 the Emperor Carlos V dictated the New Laws, which expressly prohibited the submission of Indians to slavery and forced labor. To this we must add that between the Spanish population and the Indians there was a great miscegenation, even among the nobles. On the contrary, in British North America, the miscegenation between colonists and Indians was almost non-existent, and the Indians were robbed of their lands and confined to reservations, which did not occur in Spanish America. 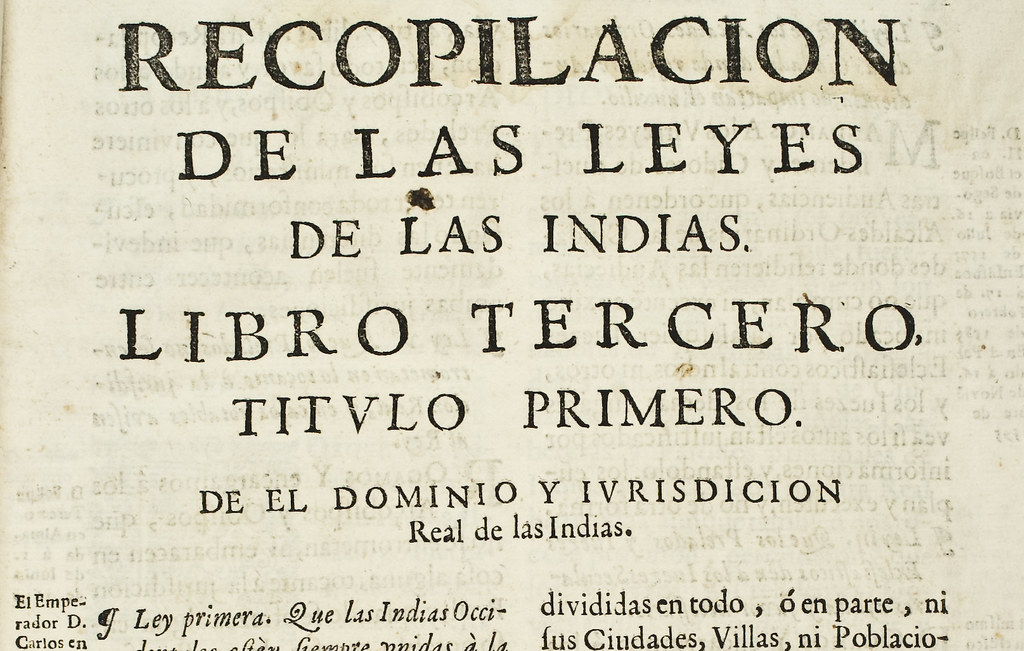 Spain founded in America 23 universities open to the indigenous

The educational work of Spain in the New World was remarkable. In 1533 the Spaniards founded the College of the Holy Cross in Tlatelolco, in New Spain (present-day Mexico), which was the first institution of higher education in all America, and in 1538 the first university of America was founded in Santo Domingo. Let us bear in mind that there are European countries that took longer to have universities. And that was just the beginning. Spain founded 23 universities in America, open to people of all races. In contrast, in North America there was no higher education institution until Harvard College in 1636 (by which time Hispanic America had 13 universities), converted into a university in 1780 and in which non-white students were not able to study well into the nineteenth century. Portugal founded the first university of Brazil in 1808.

Another aspect to emphasize is the linguistic one. Although the Crown recommended educating the Indians in Spanish to facilitate understanding with them, given the multitude of Amerindian languages, the missionary and educational work of Spain in America was translated into the preservation of pre-Columbian languages. In 1580 King Felipe II ordered the creation of chairs for indigenous languages ​​in the universities of Lima and Mexico and in the cities with Royal Audience. Two languages ​​that emerged in the fifth century BC, Nahuatl, language of the Aztec Empire, and Quechua, language of the Inca Empire, reached their greatest expansion during the Spanish Empire, thanks to the missionaries. It is necessary to take into account, moreover, that in the universities of Spanish America Latin was taught many of the subjects, besides teaching other languages. Obviously, Spanish ended up being the most spoken language because it was the vehicular language of the Empire and because the pre-Columbian languages ​​ended up being transcribed with the Spanish alphabet. Today Hispanic-America has a common language in which more than 400 million people understand each other, but at the same time have preserved pre-Columbian languages. It must be taken into account that the first printing of Spanish America was installed in Mexico in 1535. As early as the sixteenth century various works were printed in indigenous languages ​​(Nahuatl, Quechua, Aymara, Puquina …), which are among the oldest texts in those languages.

The epidemics and the demographic disaster of Spanish America

The data that I have just exposed throw to the ground the thesis that Spain proposed the annihilation of the pre-Columbian Indians. Of course, there were deaths. The Spaniards fought against some indigenous peoples, such as the Aztec Empire, counting as allies with other natives, such as Totonacs and Tlaxcalans, enemies of the Aztecs and who always had a good relationship with the conquerors. Thanks to these alliances with indigenous peoples, Spaniards, far fewer in number (in 1700 they were not more than 250,000 in all Spanish America), managed to dominate a huge territory in much less time than it took to the British to control North America in 200 years with many more people. Nevertheless, the plagues caused a demographic disaster in Spanish America, causing 95% of the deaths of that period. It was by no means a fact provoked by the conquerors, who were often surprised by the immense mortality of the natives because of the diseases brought by the Spaniards. That mortality was due to the fact that the indigenous immune system was more defenseless against certain diseases (smallpox, influenza, measles, bubonic plague, diphtheria, typhus or scarlet fever) that had already ravaged Europe centuries ago, making relatively immune to its population. The geographic isolation of the Indians caused that they were decimated by diseases without effects lethal for the Europeans. 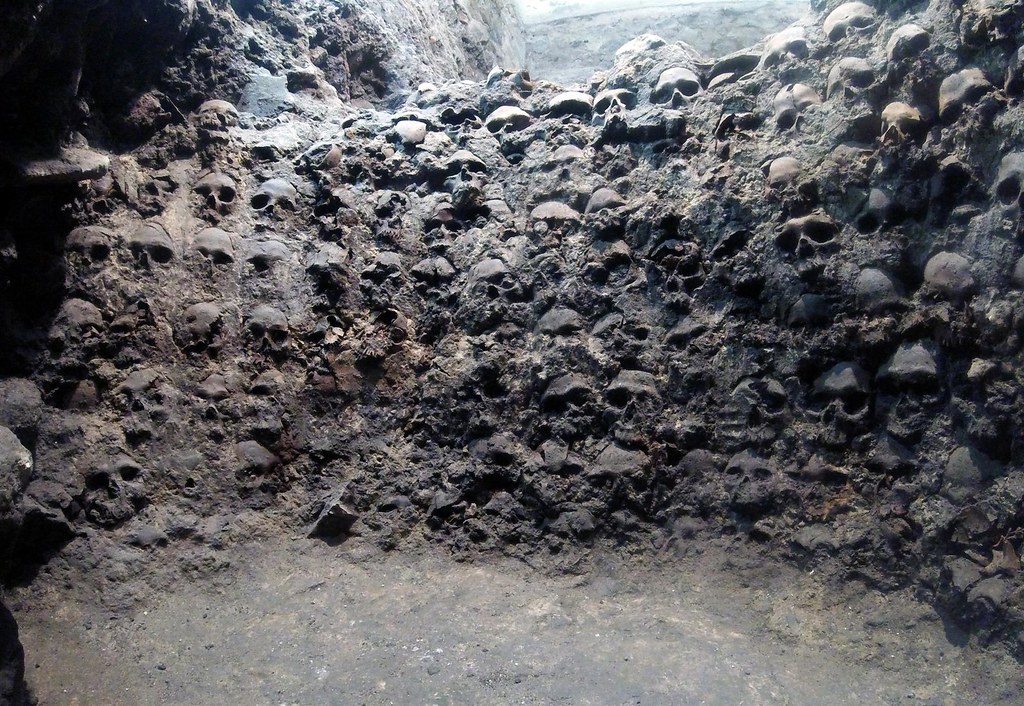 Tower of skulls in Tenochtitlan, with the remains of men, women and children victims of human sacrifices in the Aztec Empire

Some attempt to present this as a “genocide,” and they do so by completely misrepresenting the definition of it and even blaming God for it. Sample of this is an article published by the far-left Argentine magazine Page 12 in 2010, stating that those diseases were “a poisoned dart associated with the cross and the sword. A help that the little European god, distinguished in its wickedness, gave to his assassins.“ To present these plagues as the work of an “European god” who wanted to help the Spaniards to exterminate the Indians is a clear example of ideological fanaticism to the most ridiculous extremes. In these same circles a more critical view of what certain Amerindian peoples were doing is missed. A few months ago, a tower of skulls was discovered in Tenochtitlán, a monstrous Aztec monument that was witnessed by Andrés de Tapia, who accompanied Hernán Cortés, in 1521. Many denounced that testimony as a lie to justify the struggle of the conquistadors against the Aztecs, but in the end archeology has proved to be true.

Up to 100,000 human sacrifices per year in the Aztec Empire

In a letter dated 1524, Fray Juan de Zumarraga, the first Bishop of Mexico, pointed out that in Tenochtitlán more than 20,000 people each year were sacrificed to the idols and more than 72,000 throughout the Aztec Empire, including 20,000 children. The Mexican historian Mariano Cuevas (1879-1949) estimated these sacrifices at 20,000 annually in Tenochtitlan, and noted that “we are short” if we number 100,000 annual sacrifices perpetrated throughout the Anáhuac, name given by the Aztecs to the territory that occupied their empire. In the first volume of his “History of the Church in Mexico,” Cuevas pointed out: “In the beams and stands of Mixcoatl, the largest temple in Mexico, Andres de Tapia and Gonzalo de Umbria counted 136,000 sacrificed Indian skulls.“ In the same book he points out that “the Mexicas and allied neighbors lived in continuous wars with other warlike peoples, wars that had as their exclusive object the captivation of as many of their opposites as possible and then sacrificed.“ 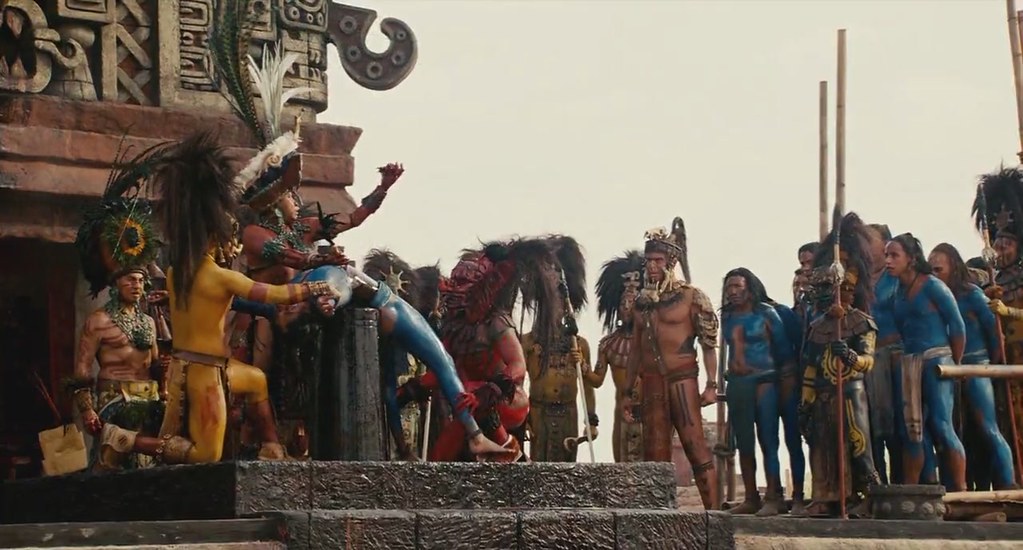 In his film “Apocalypto” (2006), Mel Gibson staged the human sacrifices in the Mayan Empire

Monstrous practices that other pre-Columbian peoples also did

Mariano Cuevas points out that the Aztecs mixed the human sacrifices of captives and slaves with the practices of cannibalism with the corpses of the murdered, after extracting their hearts and decapitating them. It was a real orgy of blood. The Mexican historian recounts the narrative of a sacrifice made in 1487 – decades before the conquest of Mexico by the Spaniards – in an Aztec manuscript, which recounts a pagan ceremony in which for four days, “from morning until sunset “Eighty thousand and four hundred men from various provinces and cities were sacrificed.” Cuevas explains that the Aztecs were not the only ones who committed these horrendous practices. Among the Amerindian peoples who also made human sacrifices, he mentioned the Tarascans, the Mayas, the Zapotecs and the Matlacingas. Today we know from archeological studies that these monstrosities also committed the Incas, the Olmecs, the Teotihuacans, the Toltecs, the Totonacs, the Mochicas and the Muiscas.

In 1521 the Spaniards put an end to these genocidal practices, associated with pre-Columbian pagan religions. The evangelization of America led the Indians to assume a new way of thinking in which all men were children of God and therefore brothers. Today, however, the far-left and certain indigenist movements associated with it attempt to whiten the perpetrators of these monstrosities by covering up these human sacrifices and presenting them as heroic members of a resistance against Spanish imperialism and against the Catholic Church. A propaganda based on a gross falsification of history.