The totalitarian ideology that has killed more than 100 million people

The President of the European Commission Will Pay Homage to Marx, the Creator of Communism

Incredible but true: the creator of a totalitarian ideology that has killed more than 100 million people will be honored by the president of the executive organ of the European Union.

Last January, the German newspaper Süddeutsche Zeitung announced that the president of the European Commission would participate in the exhibition Karl Marx 2018, speaking in a tribute to the totalitarian ideologist in the Constantine Basilica of the German city of Trier, in the state of Rhineland-Palatinate. There is a paradox that this building is a Protestant temple of Roman origin. The bottom of the temple is presided over by a cross. That is to say, that a Christian temple will receive a homage to a totalitarian who affirmed that “religion is the opium of the people”.

The aforementioned exhibition will take place coinciding with the bicentenary of Marx, born in Trier on May 5, 1818. In March 2017 the city council of that German town voted to accept the installation of a bronze statue more than 6 meters high, donated by the Chinese Communist dictatorship and designed by the Chinese sculptor Wu Weishan. The decision has caused controversy in that city. Even a leftist politician like Reiner Marz, of the Green Party, urged the municipality of Trier to refuse the gift: “Whoever accepts the present honors the donor. The Communist Party of China does not deserve any honor.” However, Social Democratic mayor Wolfram Leibe, of the SPD, defended the statue by stating: “This has nothing to do with glorification. Those times are over.” To dedicate a statue to the creator of communism is not to glorify him? The statue has also been defended from the town hall claiming that “150,000 Chinese tourists come every year to Trier, and that could increase even more”. 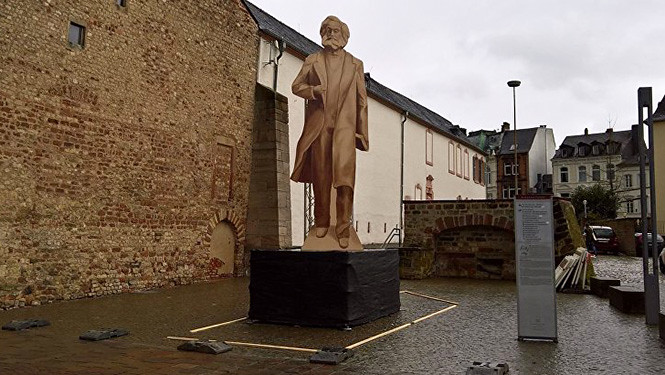 A wooden version of the statue already appears in Trier in the place that will occupy the bronze statue of Marx donated by China (Photo: SPD Trier-Mitte/Gartenfeld)

Juncker says not to attend the tribute would be “denying history”

In EU countries that suffered oppressive regimes inspired by Marx’s ideology, the announcement that Juncker would pay homage to the founder of communism has not been well received. On January 29, the Slovak Christian Democrat MEP Ivan Štefanec addressed a question to the Commission in the European Parliament, asking for confirmation of the news that Juncker would participate in this homage to Marx. The Commission’s response arrived on April 4:

“As an honorary citizen of Trier, President Juncker was invited by Malu Dreyer, Minister-President of Rhineland-Palatinate, to attend the opening ceremony of the Karl Marx exhibition. After decades of experience in politics at national and European level, President Juncker is well aware of historical facts and sensitivities. Whatever views people may have on Karl Marx, it is beyond doubt that he is a figure who has shaped the history of Europe in one way or the other. Not speaking about him, would come close to denying history. It is in this sense that President Juncker has decided to attend and speak at the opening ceremony, alongside the Minister-President of Rhineland-Palatinate.”

Yesterday, a Spanish liberal-conservative organization, El Club de los Viernes (CdV), answered Juncker’s statement, describing as “shameless decision” his acceptance of the invitation to participate in that tribute. Regarding the argument of the president of the Commission not to deny history, the CdV points out that this does not justify “paying tribute from institutions to who inspired totalitarian leaders that plunged many Europeans to starvation and extreme poverty, apart from a null respect towards civil liberties and human rights.” The CdV has also pointed out that “communists, similar to fascists and national-socialists, are enemies of what we must understand as Western values that have made possible the idea of a free market as in a guarantee of the rule of Law, civil liberties and equality before the law.” 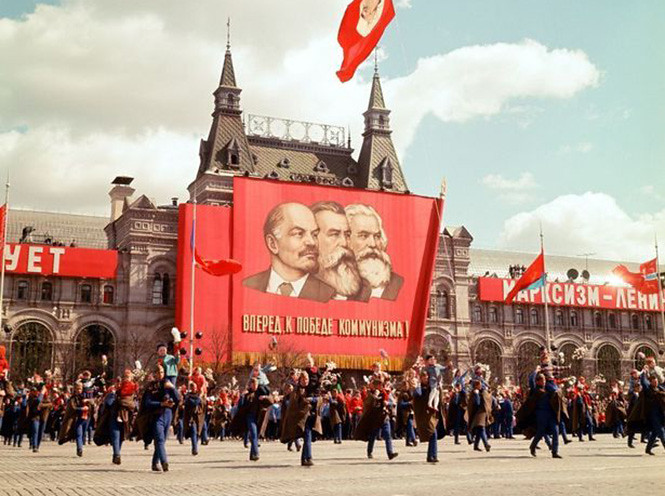 Victory parade in the Red Square in Moscow on May 9, 1967, during the communist dictatorship. In the background are the portraits of Lenin, Engels and Marx, the main ideologues of communism. (Photo: Trinity Mirror/Mirrorpix)

A Romanian journalist: “Lenin will be next?”

From the Romanian website Napocanews, Ionuţ Ţene asks: “Lenin will be next?” This Romanian journalist points out that “the West has not yet been cured of communism and is trying to impose it again by perverse methods now not from Red Moscow, but from the Brussels elite, led by ex-Marxists or Maoists like Junckers, Barroso or Cohn Bendit.” Ţene recalls that Marx’s ideology is guilty of the death of millions of innocents, and criticizes that the exhibition even plans to allocate a space to praise Marx among children from 7 to 12 years old. “Does Juncker want to transform the EU ideologically into the People’s Republic of China?”, asks the Romanian journalist, adding: “Is Juncker inspiring European politics in ‘Capital’?”

A Pole fled from communism: “Marxism led to the killing of millions around the world”

In the United Kingdom, Conservative MP Daniel Kawczynski, born in Poland and whose family fled the country during the communist dictatorship, asked Juncker to reject that invitation and declared: “Marxism led to the killing of millions around the world as it allowed a small band of fanatics to suppress the people we must learn the lessons from this and share with our children.” Kawczynski has indicated that the installation of that statue “would be equivalent to someone unveiling a statue of Mussolini or worse.”

The Victims of Communism Foundation denounces the totalitarian nature of China

From the United States, Marion Smith, executive director of the Victims of Communism Memorial Foundation, recalled: “The philosophy of Karl Marx, when applied, has created some of the greatest episodes of human suffering in all of history. Marxist states like the Soviet Union and communist China are responsible for more than one hundred million deaths as a result of their insane quest to implement Marx’s utopian ideas in practice.” He added: “It’s telling that the statue in Trier is being donated by the People’s Republic of China—the largest totalitarian state in the 21st century.” Smith denounced that at this very moment “Beijing is building a digital surveillance state the likes of which even George Orwell could not imagine, conducting campaigns of outright cultural genocide in Tibet and Xinjiang, and implementing a ‘social credit system’ to rank its nearly one-billion citizens by their commitment to Marxist ideology.”