The plane collided with the landing track and broke in half, catching fire

On Tuesday, January 22, a Tupolev Tu-22M3 “Backfire” bomber of the Russian Air Force crashed when it landed at the Olenya Air Base in Olenegorsk, in Murmansk Oblast.

Although some sources claim that the bomber was unarmed, others say that the plane was carrying an X-22N missile under its left wing. Three of its four occupants died in the accident. Two died in the act and the third after being transferred to a hospital. The accident occurred shortly after 1:30 p.m., with very bad weather conditions. Yesterday a video was published that shows how the accident was: the plane hit the track splitting in half, and becoming a big ball of fire. The images are shocking (I inserted the video beginning in the middle, because in the first half you can not see anything):

The accident aircraft belonged to the 40th Mixed Aviation Wing (military unit 36097), equipped with two Tu-22 and based in Olenya. It was delivered to the Soviet Air Force on March 30, 1983. The deceased are Commander Alexei Germanovich Guriev and Commander Konstantin Y. Mazunin, both pilots, and the Captain Viktor Vladimirovich Greif, navigator. The only survivor is Lieutenant Colonel Maxim Anatolievich Rylkov, navigator, who is in an intensive care unit.

The Tu-22 is a large jet bomber with wings of variable geometry, similar to the American B-1B Lancer. It entered service in the 1970s, although the variant that has suffered this accident, the Tu-22M3, was introduced in 1983. It is the third bomber of this type that Russia has lost in recent years. In August 2008, one was shot down by a surface-to-air missile during the brief Russo-Georgian War while flying over South Ossetia, killing three of its four occupants. In September 2017, a Tu-22M3 crashed during its takeoff at the Shaykovka Air Base, without its occupants suffering damage. My condolences to the families and companions of the deceased crew members. 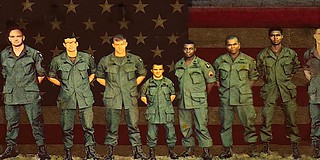 The amazing history of Richard J. Flaherty, the shortest soldier in the United States

There are people who feel self-conscious about their short stature, but where there is a will, a small person can also do great things.