Throughout history, slander has been used very often to harm entire peoples. One of the clearest examples of this practice was the “blood libels”.

The origin of blood libels

The expression “blood libel” refers to the false criminal accusations that have been launched against the Jewish people since the Middle Ages. One of the most famous and repeated blood libels was to accuse the Jews of kidnapping Gentile children to crucify them. It is a false accusation that caused various killings of Jews throughout history. But undoubtedly the most famous blood libel is the one entitled “The Protocols of the Sages of Zion”, a pamphlet created by the Okhrana, the secret police of Czarist Russia, to slander the Jews and justify the progromos, that is, the lynchings and killings directed against the Hebrew people.

Of course, blood libels have not only been made against the Jews. In Spain, the anti-Catholic left circulated several times the slander that the nuns gave poisoned candies to the children, in order to kill them. This blood libel served to justify the burning of churches and convents by the left, especially during the Second Republic. Today, with the advance of information technologies, we believe we are safe from blood libels, but this is not the case, as they have been demonstrating a series of events that have the Polish people as victims. As Alberto Gómez Trujillo explained in a complete article published in this blog, for years the expression “Polish death camps” has been spread to refer to the extermination camps installed by the Germans in the Poland occupied by the Third Reich. 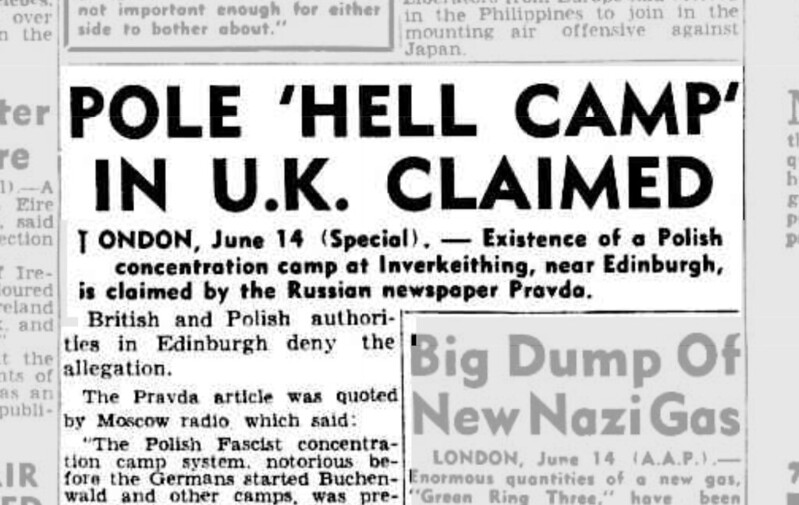 An example of anti-Polish blood libel. News published by the Australian newspaper The Courier-Mail, Brisbane, on June 15, 1945, echoing a Soviet bulletin published by the newspaper Pravda, claiming that the Poles had a “Fascist concentration camp system” before the invasion and that they even created one of those camps near Edinburgh, in Scotland, when Polish forces took refuge in the United Kingdom during the war. It was all a lie.

In 2017 I pointed out the origin of this defamatory campaign. After the World War II, and surely to erase the trace of the alliance between Germany and the USSR in 1939 (we must remember that it was both countries that started that war invading Poland together), the Stalinist propaganda began to spread the idea that Poland was as responsible for the Holocaust as Germany. In June 1945, Pravda, the newspaper of the Communist Party of the USSR, spoke about a “Polish Fascist concentration camp system”, which would have been taken advantage of by the Germans. It was a lie, but it was spread by the Allied press, perhaps to justify the United States and the United Kingdom abandoning the Polish people, leaving it under the yoke of Stalin, despite the enormous help that Poland had provided to the Western Allies (from France and Norway to North Africa, through the Battle of England, the campaign of Italy and the western offensive of the end of the war). 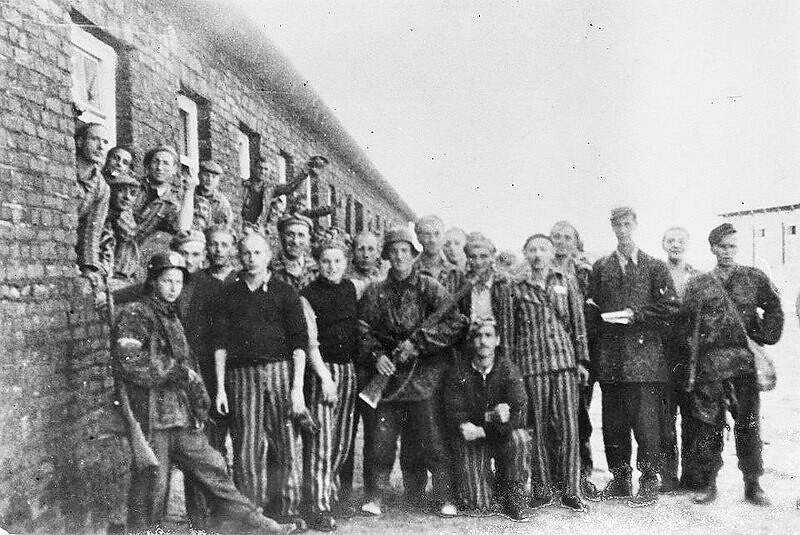 Jewish prisoners from the Gęsiówka concentration camp, in Warsaw, along with Polish insurgents from the “Zośka” Battalion of Armia Krajowa who had just released them from August 1944, during the Warsaw Uprising.

The operation of the Soviets to discredit the Polish resistance

Both the USSR and the Polish Communist dictatorship also slandered the Polish resistance against the Nazis, since the bulk of that resistance – the Armia Krajowa (AK), the Batalion and Chłopskie (BCh) and the Narodowe Siły Zbrojne (NSZ) – was anti-Nazi but also anticommunist. In fact, the communist groups of the Polish resistance, such as the Gwardia Ludowa and the Armia Ludowa, only appeared after the German invasion of Russia in June 1941 (the same happened with the communist resistance in France), and both groups acted as Moscow puppets, often attacking the other organizations of the Polish resistance. It so happens that the only resistance group of the Second World War that formed a section to help the Jews, the Żegota, was the Polish AK, which was loyal to the Polish Government in exile, based in London. Likewise, members of the AK and the NSZ participated in the liberation of concentration camps, such as the Gęsiówka camp, liberated by Polish insurgents from the “Zośka” Battalion of the AK in August 1944, and the Holýšov, freed by soldiers from the NSZ in May 1945. Although they had started their fight against the Nazis before the Communists, the members of the Polish resistance not controlled by Moscow were arrested after the war, charged with false accusations and branded as bandits. Many were imprisoned, tortured and executed. 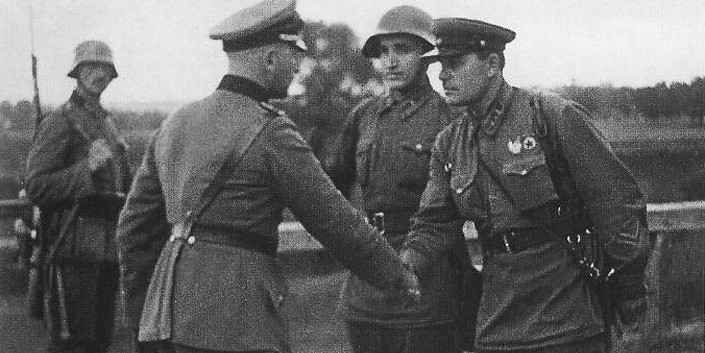 A German and a Soviet officer join hands to meet the forces of both powers in the Polish town of Brześć Litewski (today Brest-Litovsk, in Belarus) in September 1939, after the invasion of Poland by Germany and the USSR.

What they wanted to cover: the collaboration between the Gestapo and the NKVD

On the other hand, it should be noted that 434 Polish Polish officers were killed by the Soviets in the Katyn massacre. One of the murdered was Baruch Steinberg, Chief Rabbi of the Polish Army and a man known for his patriotism. In addition, about 100,000 Jews defended Poland in 1939 against the German-Soviet invasion. It must also be borne in mind that the German invasion of Poland was the result of the Ribbentrop-Molotov Pact, signed by Germany and the USSR in August 1939. The Nazi atrocities against the Jews of Poland were possible thanks to Soviet complicity with the Germans in 1939. The collaboration between the two occupying powers in Poland at the beginning of the war reached some extremes that few know: the Gestapo and the NKVD came to hold joint meetings, including that of Zakopane on February 20, 1940, in which both secret police coordinated their action against the Polish resistance. The Soviet secret police had many more troops than the German and much more experience in the practice of terror, an experience he shared with his Nazi colleagues. The collaboration included the delivery by the NKVD to the Gestapo of some 4,000 German Jews and Communists who had fled to the USSR. Stalin’s willingness to please the Germans was such that the USSR continued to send trains loaded with primary materials to Germany until the German invasion of June 1941, an invasion that baffled the Soviet dictator. 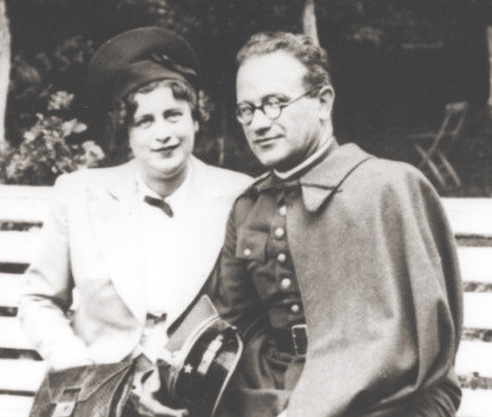 A CIA report on the Katyn massacre published in May 2007 explains the relationship between Germany and the USSR at that time: “Relations between the Red Army and the Wehrmacht were genuinely friendly, based on mutual hostility toward Poland and years of secret collaboration after World War I.” The same report states: “During 1940-1941, the NKVD unleashed a reign of terror, arresting, torturing, and killing thousands of Poles and inciting national and ethnic violence among Poles, Jews, Ukrainians, and Belorussians in the former eastern Poland.” Another CIA document includes the observations of James J. Angleton, head of Italy’s X-2 (the counterintelligence service of the OSS, the predecessor of the CIA): “the Russians had pro- voked Poles to attack Jewish civilians to discredit the Polish government, force the British to deal with the question of a Jew- ish homeland in Palestine, and justify Soviet repression in Poland.” So, the US government knew about these plans, but hid them because at that time the USSR was their ally. On the other hand, if that is what the Soviets did during the war, let us imagine what they were capable of in the postwar period to discredit the Poles and hide the complicity of the USSR with Nazi Germany between 1939 and 1941.

The failure of the Soviet plans: one million Poles helped save Jews

Despite Soviet efforts to sow division and confrontation among the Poles, historians Hans G. Furth and Richard C. Lukas noted that around a million Poles helped in some way to save Jews, despite the fact that German authorities punished the mere fact of hiding a Jew with the execution of all the inhabitants of the house. Statistics from the Israel War Crimes Commission indicate that less than 0.1% of ethnic Poles (around 24,000 people) collaborated with the occupiers. Currently, Poland is the nation with the most Righteous Among the Nations – over 6,800 – recognized by Israel. We must add that the Polish resistance was the largest movement of resistance against the Nazis in World War II. The main one of its organizations, the Armia Krajowa, got to have 400,000 members in its ranks. And unlike what happened in other occupied countries, Poland did not have a collaborationist government with the Germans and did not contribute a single volunteer to the SS. 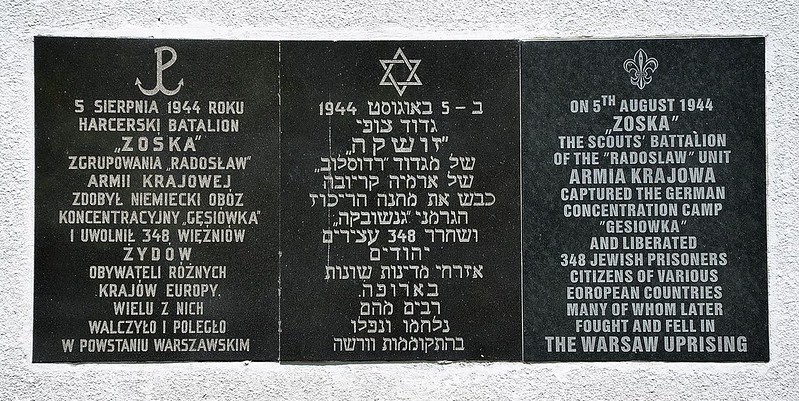 Badge on Mordechaja Anielewicza Street 34, in Warsaw, recalling the liberation of Jewish prisoners from the Gęsiówka concentration camp by the “Zośka” Battalion of Armia Krajowa, during the Warsaw Uprising. On the part in Polish (left) there is Kotwica, emblem of Armia Krajowa. On the part in Hebrew the Star of David appears. And on the part in English is the fleur de lis, emblem of the Polish Scout movement, from which many members of the aforementioned battalion came..

The libels of blood against the Poles at present day

However, some keep alive the blood libel created by Stalinism against the Poles. One example of this is Israel’s Foreign Minister, Yisrael Katz, who said a few days ago that “Poles collaborated with the Nazis” and “suckle anti-Semitism with their mothers’ milk”, an openly racist statement that has provoked a serious crisis between Poland and Israel. The Polish Jewish community has criticized these statements, recalling the sacrifice of many Poles to save the Jews during the Second World War, and adding: “Accusing all Poles of antisemitism offends the Righteous… And it also offends us, Polish Jews.” The obvious question is: why does Yisrael Katz make such racist statements against the Poles, and not against the Germans or the Russians? Why this hatred of Poland, after all the sacrifices that many Poles faced to save their Jewish compatriots?

Main photo: German and Soviet soldiers in the joint parade that both armies made in the Polish town of Brześć Litewski (today Brest-Litovsk, in Belarus) after the invasion of Poland by Germany and the USSR in September 1939. You can see more images of that parade by clicking here.