Anti-racists? ‘Antifa’ attack the statue of a Polish hero who opposed slavery

Some try to convince us that the violent protests taking place in the United States are fueled by “anti-racism.” There are facts that deny it.

One of those events occurred in Washington DC, the capital of the United States. In the northwest corner of the Lafayette Square gardens, just in front of the White House, there is a statue honoring General Tadeusz Kościuszko, a Polish military man who fought alongside the Americans in the United States War of Independence. Kościuszko is considered a national hero in Poland and in the United States, having endorsed the cause of Liberty throughout his life, leading in 1794 an Uprising against the Russian occupation of the Polish-Lithuanian Commonwealth.

Vandals from the far-left attacked the monument to Kościuszko

On the night of Sunday, May 31 to Monday, June 1, left-wing extremists attacked that monument. A Polish journalist, Paweł Żuchowski, posted some photos of the attack, looking very upset that he was unable to stop the vandals: 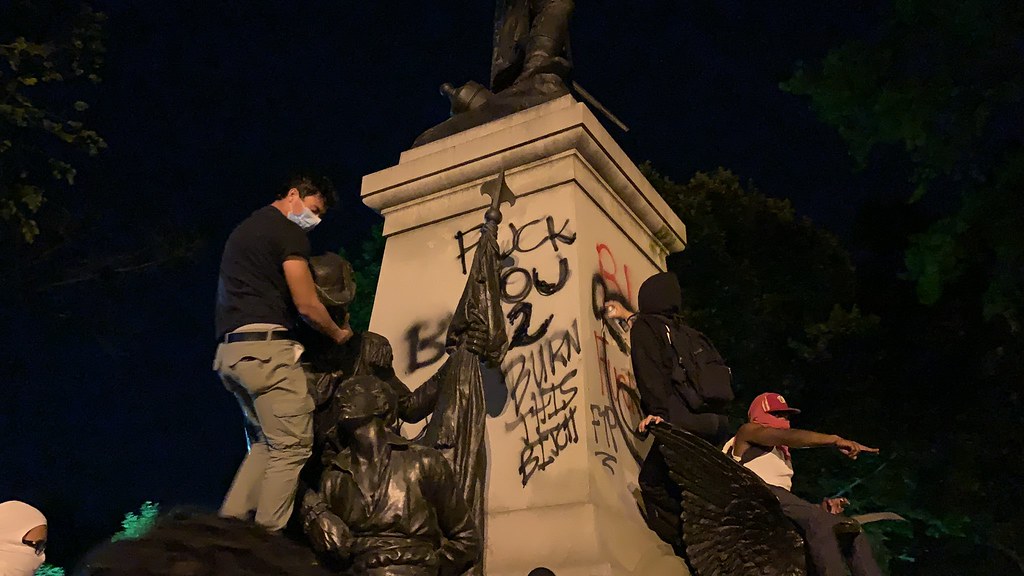 As can be seen, some of the attackers acted with their faces exposed, perhaps confident that they would go unpunished for this action. 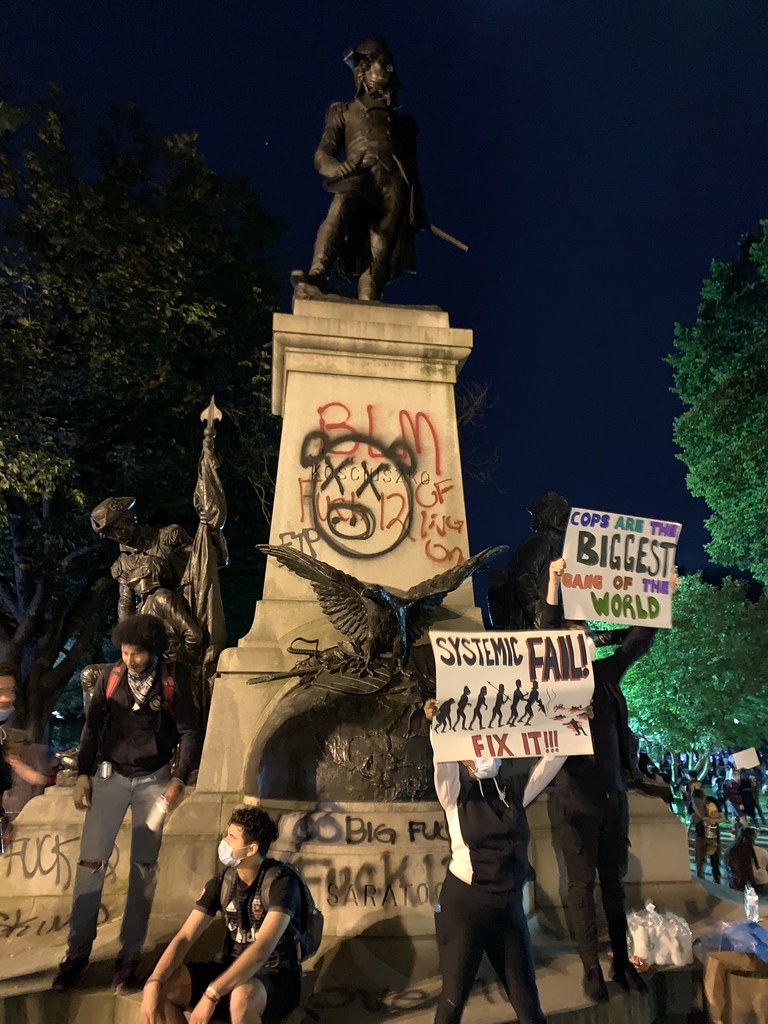 A few hours after the attack, Marek Wałkuski, a correspondent for Polish Radio in Washington DC, published these photos of the vandalized monument: 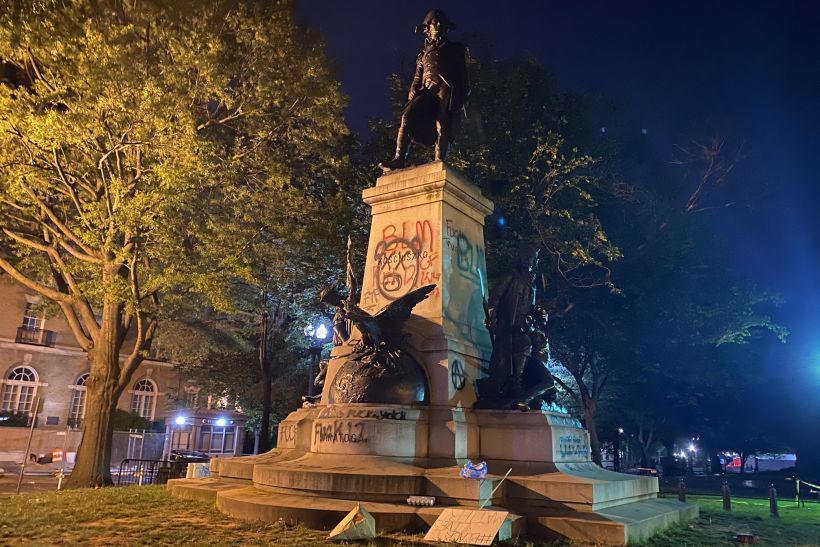 In addition to obscene expressions, the attackers repeatedly painted the letters “BLM” on the monument, referring to “Black Lives Matter”“>”Black Lives Matter”, a black racist movement that in July 2016 was singled out for its responsibility for the murder of five police officers in Dallas. (Texas) for racist reasons, after a BLM criminalization campaign against the American Police. 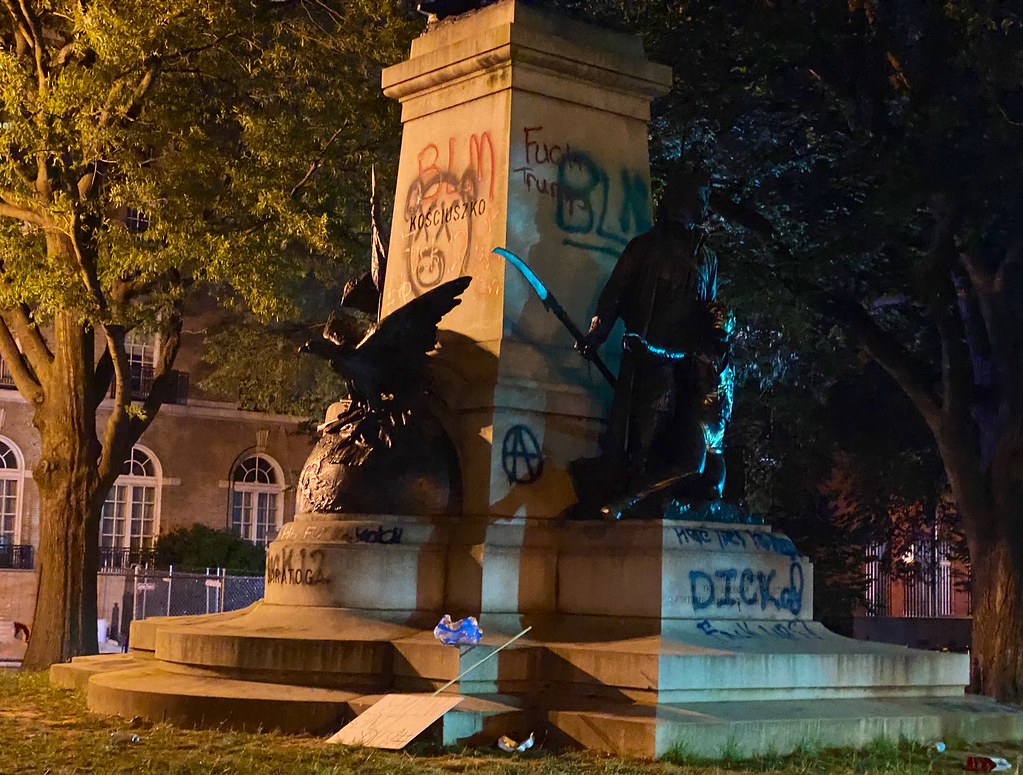 Outrage in Poland for the attack on their national hero

These photos were shared on Monday by Piotr Wilczek, Poland’s ambassador to Washington DC, in a message expressing himself “disgusted and appalled by the acts of vandalism committed against the statue of Thaddeus Kościuszko in DC, a hero who fought for the independence of both the US and Poland”, while calling on the White House and the National Park Service to quickly restore the statue to its original state. 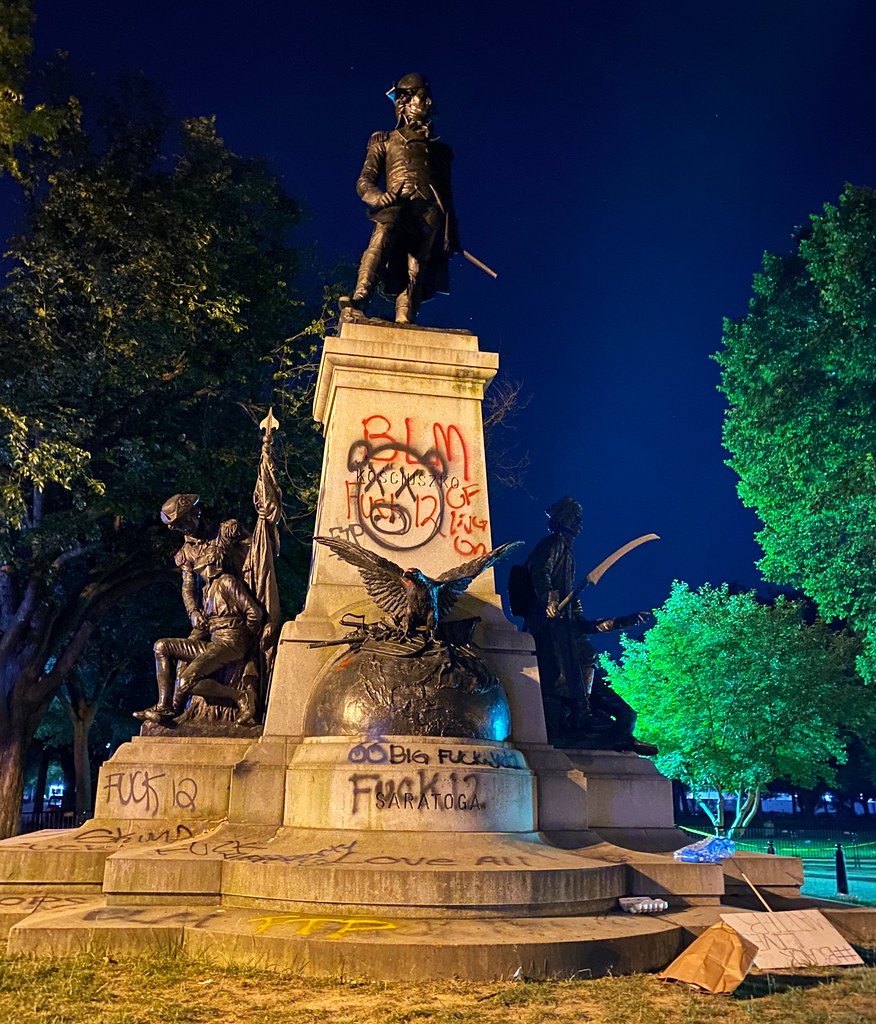 The images of the attack have been published in Poland by the Polish Television, the Polish Radio and many other national media, causing a wave of outrage in the country, which considers Kościuszko one of their greatest national heroes.

A man who left his inheritance to liberate black slaves

In its news of the attack, the Polish Radio recalled that “Kościuszko was one of the first on American soil to call attention to the problem of the inequality of blacks residing in the United States.” The Polish public broadcaster also recalled that “Kościuszko received a substantial sum of $ 18,912 in the form of outstanding payment for his services in the fight for the independence of the United States. The Pole also bought 500 acres (more than 200 hectares) of land in Ohio. In his will, written twenty years before his death, he decided that the money would be transferred for the purchase of freedom for black slaves, and the land of the Polish hero would also be in their hands.” The Polish Radio also indicates that this hero “throughout his life bore witness to his commitment to the equality of freedom for people of all states, denominations and skin colors.”
His example inspired the abolitionist movement in the United States

Sadly, Kościuszko’s will was never executed as he indicated, although part of his inheritance was ultimately used to found a school in Newark, New Jersey, for African-Americans in the United States, which was inaugurated seven years after the hero’s death. Polish. In his honor it was called “Kościuszko School”. The Polish hero defended the emancipation of black slaves in the United States, and his example inspired the abolitionist movement. In fact, one of the best-known leaders of that movement, the leader of the Republican Party Thaddeus Stevens (1792-1868), was baptized with that first name – rare then in the United States – in honor of Tadeusz Kościuszko (it was a popular name in the eastern part of the Polish-Lithuanian Commonwealth, where the Polish hero came from, due to the devotion there to Saint Judas Tadeo).

“In nature we are all equal”, he wrote

Kościuszko was a Catholic, and was in fact the highest military command of this religion on the American side during the Revolutionary War, as recalled in “Kosciuszko Home National Historic Site” (US Congress, 1972). He used to coincide in the Catholic parish of San José, in Philadelphia, with Charles Carroll, the only Catholic signer of the US Declaration of Independence. Embodying a purely Christian thought, in a letter to his sister Anna, Kościuszko wrote: “in nature we are all equal, the only difference being virtue, wealth and information.”

Thomas Jefferson defined him as a “pure son of freedom”

Today his remains are buried in Wawel Cathedral in Krakow, in a pantheon reserved for the kings and heroes of Poland. Thomas Jefferson, one of the Founding Fathers and third President of the United States, defined Kościuszko as a “pure son of liberty”, maintaining a close friendship with him until the end of his life. In 1800, when Jefferson became president, Kościuszko wrote him a letter saying: “do not forget yourself in your post, always be virtuous, republican with justice and probity, without display and ambition. In a word, be Jefferson and my friend.”

In June 1926, in front of the Kościuszko monument in Chicago (a city where there is still a large Polish community), the African American Robert S. Abbott, editor of the Chicago Defender, recalled the gesture of the Polish hero towards black slaves in his will and he delivered one of the best portraits ever written about him: “Wherever there is civilization and wherever Negroes live, that act and the glory of that great patriot, who gained a name for himself in a struggle for the freedom of nations, will always shine for us on the path to freedom and progress.”

And he added: “Thaddeus Kosciuszko, patriot, soldier, general, engineer, politician, altruist and liberator was that bond that united these two races that respect and honor him for the actions he carried out for humanity.” Abbott ended his speech with these words: “as long as rivers will flow into the sea, as long as shadows will fly above mountain peaks, as long as the skies will nourish the stars, as long as the heart will love, as long as the mind will be able to think in the memory of our race, the deeds of your beloved Poland and your great patriot and hero, Thaddeus Kosciuszko, will last forever.”