The Ukrainian attack on the Russian missile cruiser Moskva on April 14 was surrounded by a certain mystery due to the absence of images. Until now.

Мike Right (@BormanIke) posted this photo of the damaged ship at 0:12 CET, noting the following: "And here is the first confirmed picture of “Moscow” after the incident. There are traces of a powerful fire in the compartments, traces of damage to the skin under the main superstructure and a capsize to port (all, according to reports from the Ukrainian Armed Forces). PU with KR are intact, their detonation obviously did not occur." 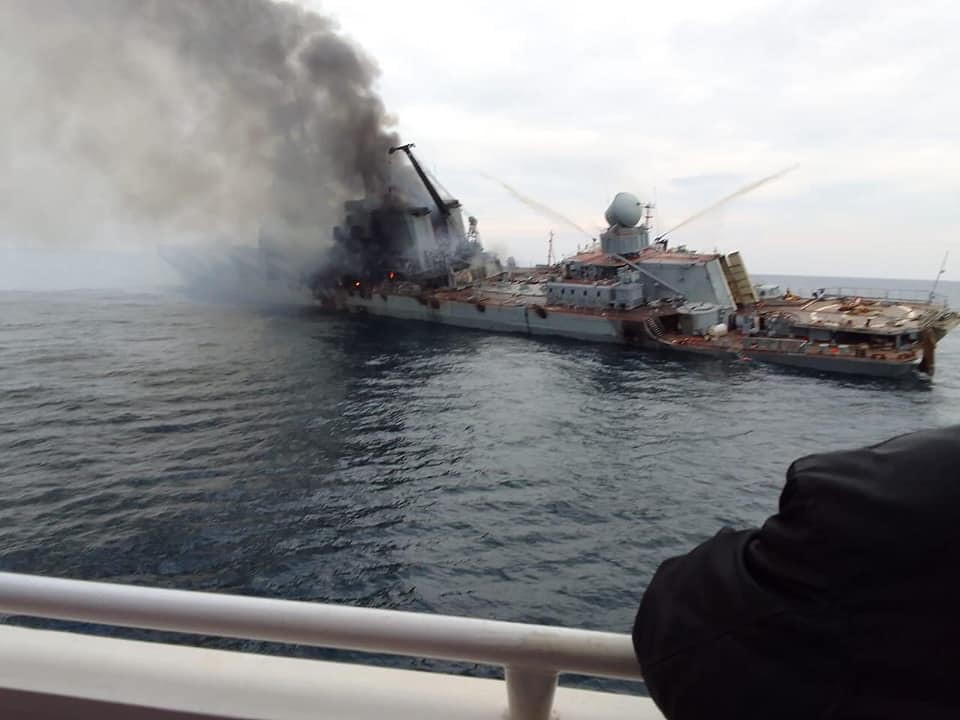 In a second tweet, Mike points out that the photo was taken on April 15, that is, the same day it sank as a result of the damage sustained in the attack with two Ukrainian R-360 Neptun missiles.

A few minutes later, at 0:41 CET, Ukraine Weapons Tracker posted this other photo of the damaged ship, taken from a further distance than the previous one. The column of smoke that rises from the central part of the ship is larger and thicker, and shows the serious damage suffered in the Ukrainian attack. 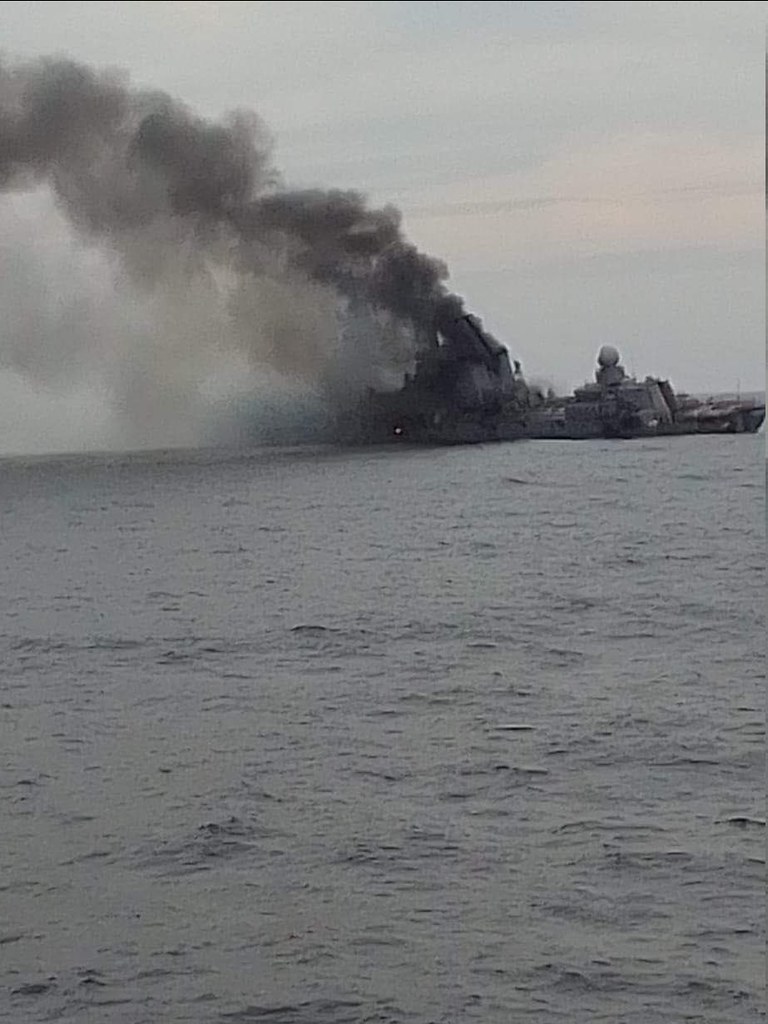 + ACTUALIZADO 2:11h: I have made this enlargement of the first photo to observe in more detail the damage to the central part of the ship: 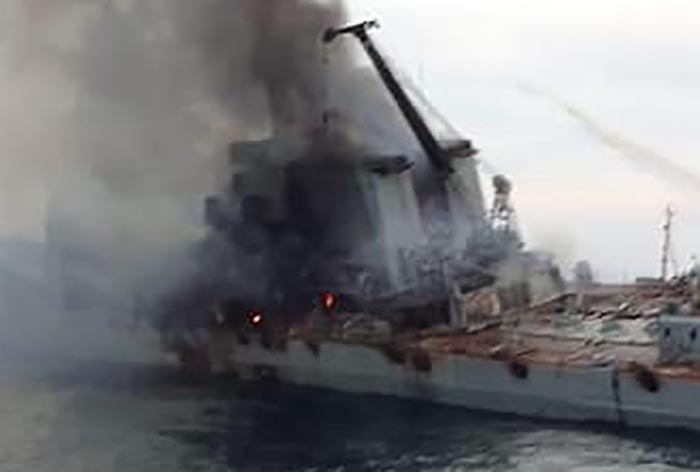 As @bhangm3ter points out on Twitter, the small black spots seen on the hull coincide with many other portholes (windows) on the ship, indicating a strong fire inside the ship. In addition, a larger stain is observed to the left, which could be the impact of the missile near the waterline, which listed the ship to port. In this photo by George Chernilevsky I have marked with a red rectangle the part of the ship that would have been most damaged by the attack: 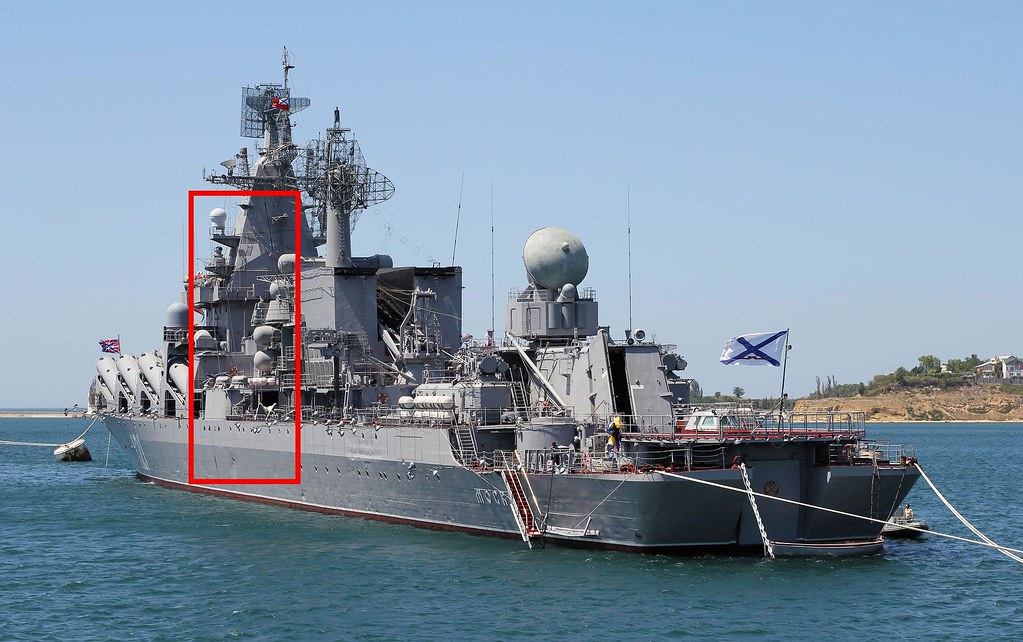 In this Reuters photo I have marked the same area. As can be seen, the Ukrainian attack would have hit the back of the bridge, very close to the P-1000 Vulcan missile launchers. The attack would have hit the height of the structure that supported the air defense radar antennas: the large 3D Voskhod MR-800 air search and the small 2D MR-500, both long-range (these are the antennas that can be seen above the red rectangle in this photo). 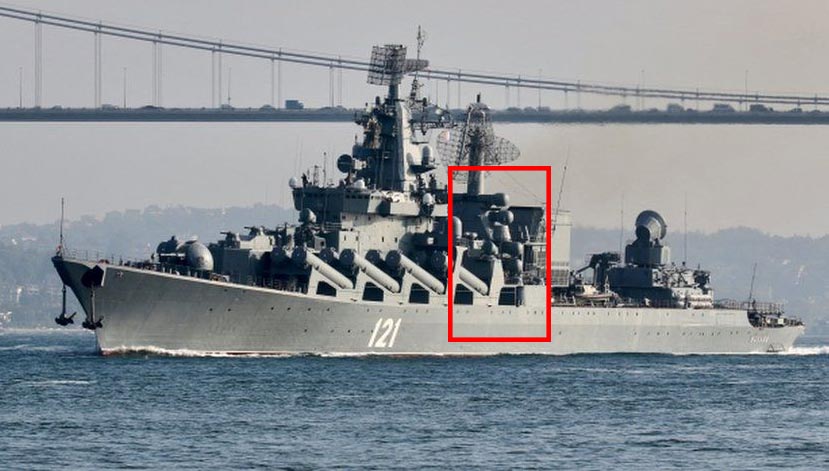 + UPDATED 2:30 a.m.: Analyst and ship expert Yörük Işık has pointed out that the rescue ship from which the photos were taken could be the Russian tugboat SB742, of the type Project 22870 and which is part of the 145th Rescue Ship Squadron of the Black Sea Fleet. In addition, the Hisutton.com website has published this analysis of the first of the photos (click on the image to see it enlarged): 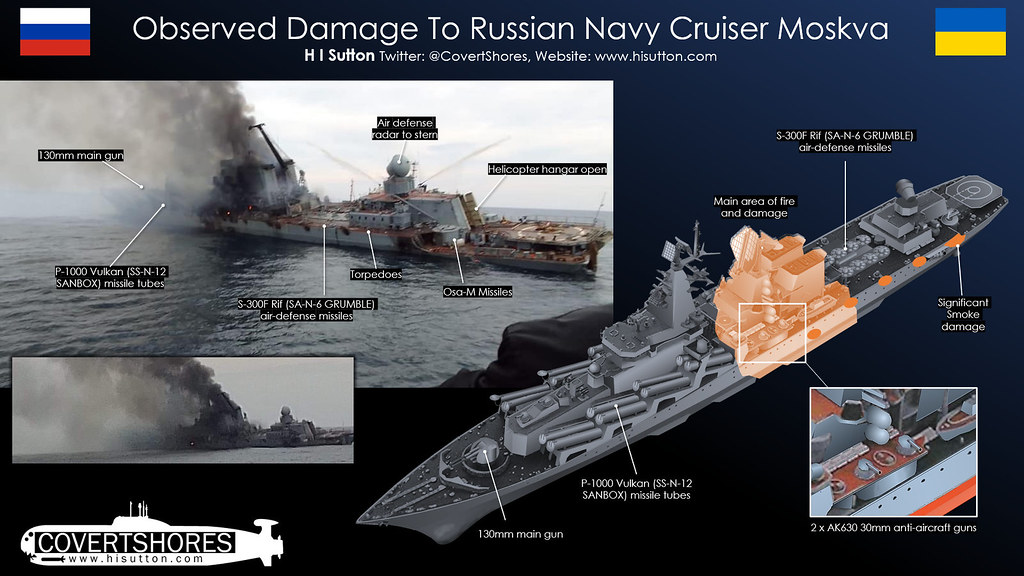 Hisutton.com notes: "The center of the damage appears to be amidships in the region of the funnels. This is aft of (behind) the main P-1000 Vulkan (SS-N-12 SANDBOX) anti-ship missiles and ahead of the S-300F Rif (SA-N-6 GRUMBLE) air-defense missiles. It is also in the vicinity of the engines." Furthermore, it adds: "All the aft liferaft boats have been launched, although one remains on the aft deck. This suggests that the crew has already abandoned ship at this point."