Of the largest countries in Europe, Spain is one of those that has not yet delivered any heavy vehicles or missiles to Ukraine.

This Sunday, the newspaper El País, very close to the government of Pedro Sánchez, publishes a news in which it states that Spain is "willing to deliver anti-aircraft missiles and Leopard combat tanks to Ukraine." The Army would be in charge of training Ukrainian crews in the handling of these armored vehicles through the military contingent that it has deployed in Latvia. "In a second phase, the training of the Ukrainian tankers would already be done in Spanish territory," according to government sources consulted by that newspaper. 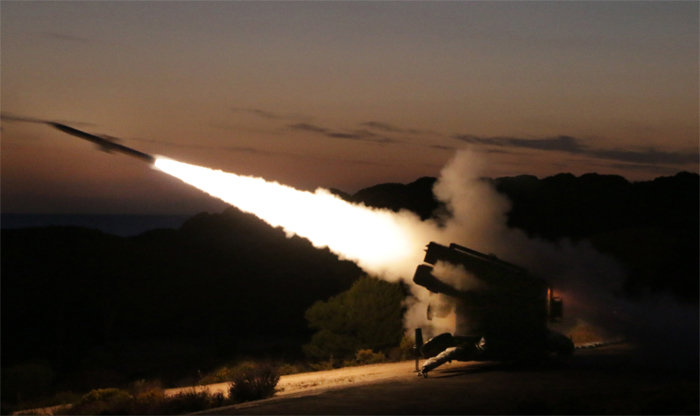 A launch of a Selenia Aspide surface-to-air missile by the 73rd Anti-Aircraft Artillery Regiment of the Spanish Army in March 2014 at the "Médano del Loro" Maneuver and Shooting Range, in Huelva (Photo: Ejército de Tierra).

The Aspide missiles of the Spanish Army and Air Force

The aforementioned newspaper specifies this possible help by pointing out that the missiles would be of the Aspide type and a battery would be delivered. The Aspide is a short-range surface-to-air missile designed in the 1970s by the Italian company Selenia. In Spain, this missile has been used by both the Army and the Air Force. In the first case, the 200 missiles purchased by the Army in 1985 were used by the 73rd Anti-Aircraft Artillery Regiment, based in Cartagena, distributed in 6 batteries of the Spada system. According to Infodefensa, after three decades in service, the Spanish Army discharged it at the end of 2020 after launching "the last available missiles."

An Aspide 2000 missile, like those used by the Spanish Air Force (Photo: MDBA).

The newspaper El País speaks of sending "a battery" of Aspide missiles "that the Spanish Army has replaced with another more advanced system." This invites us to think that these are possible surpluses of the Army's available missiles, but as we have already seen, the Spanish Army has already launched all the missiles it had.

Significantly, El País refers to this missile as "Shorad Aspide", an error that is due to the fact that the Aspide of the Air Force are operated by the SHORAD (Short Range Air Defense) section of the Support Squadron Air Deployment (EADA). The Spanish Air Force still operates a more modern variant of this missile, the Aspide 2000, of which it bought 51 units in 1996, distributed in two batteries of the Spada 2000 system. Each Spada 2000 system is made up of between two or four firing sections, each with two launchers. Its range is 25 kilometers, and 4 years ago the Spanish Air Force was already studying its replacement by more modern systems. 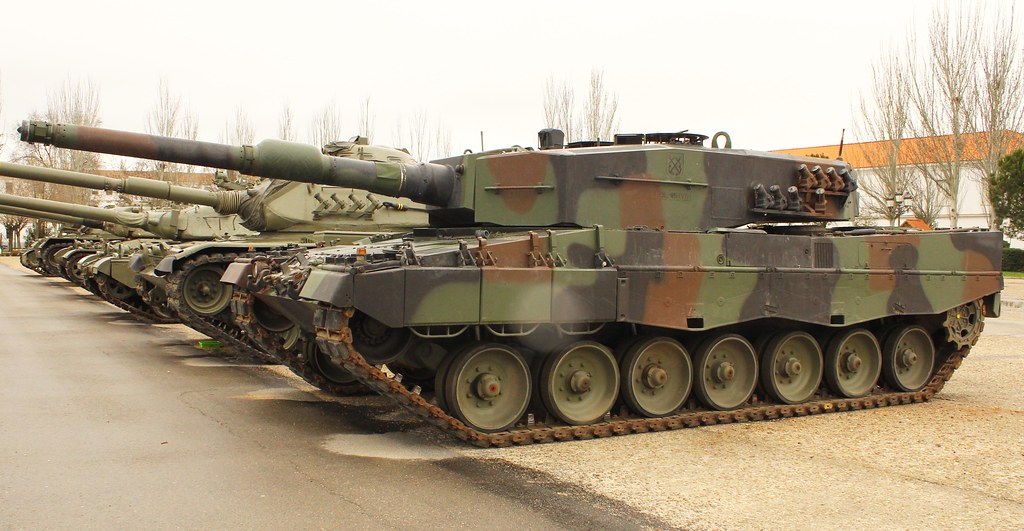 A Leopard 2A4 at the Museum of Armored Units at the El Goloso Military Base, Madrid. This battle tank bears the shield of the disappeared Light Infantry Brigade "San Marcial" V (Photo: Defensa y Aviación).

The Leopard 2A4 main battle tanks of the Spanish Army

On the other hand, El País states: "The Spanish government is also willing to deliver to Ukraine the Leopard A4 combat tanks that have been hibernating for a decade at the logistics base of the Army in Zaragoza. These tanks are part of the batch of 108 second-hand units that Germany sold to Spain in 1995, as a prelude to the Leopard manufacturing contract in Spain." Again, the socialist newspaper makes a mistake: it is not "Leopard A4", but Leopard 2A4. 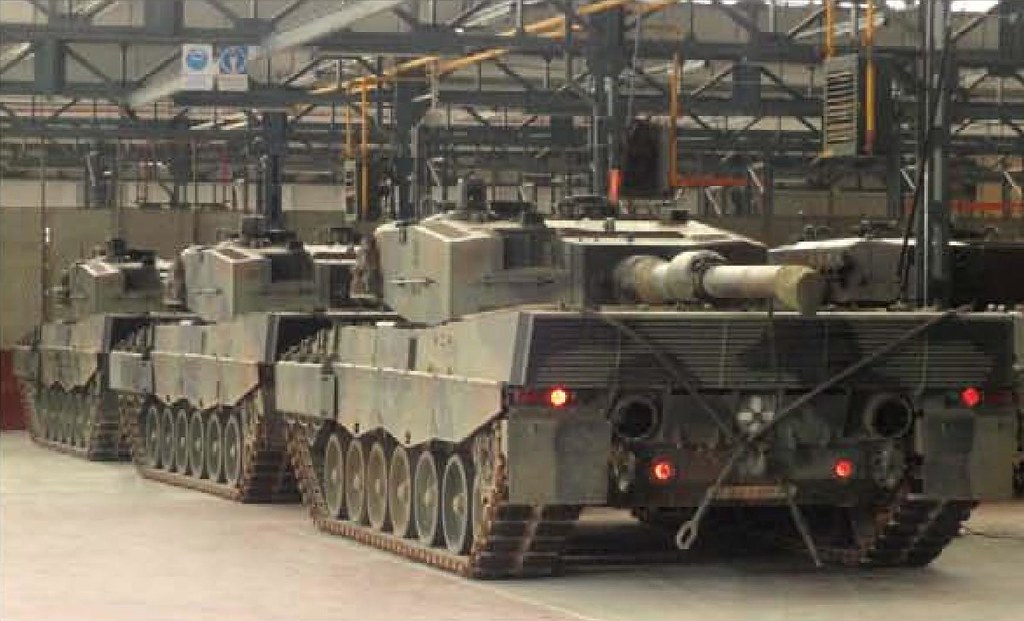 In the fall of 2012, 53 Leopard 2A4s were stored in the facilities of the Logistics Support Group No. 41 (AALOG 41) in Casetas (Zaragoza). The vehicles came from the 11th Mechanized Infantry Brigade "Extremadura" and the 5th Light Infantry Brigade "San Marcial", dissolved in 2016. It was planned to convert them into sapper and bridge launch vehicles, but the idea was scrapped due to lack of budget. In October 2012, the Boletín Tierra No. 202 indicated that storage would last at least 5 years: "Currently, the 53 units are undergoing a preventive and corrective maintenance procedure, required by the long-term storage plan. Among other tasks, the condition of the batteries, parking brake, fire extinguishing system, etc. is being checked," the Spanish Army said at the time.

A month ago, the Ukrainian government asked the Spanish government for those 53 Leopard 2A4s stored by the Spanish Army, as well as the old F/A-18As from the 46th Wing of Gando (Canary Islands), which are reaching the end of their operational life. Regarding the current state of the stored tanks, El País notes the following: "Defense sources estimate that some 40 tanks could be rehabilitated and delivered to the Ukrainian Army, but they warn that this would require subjecting them to a fine-tuning by an industry which shows little inclination to undertake this work at a time when requests are raining down on it due to the generalized increase in military spending in Europe." 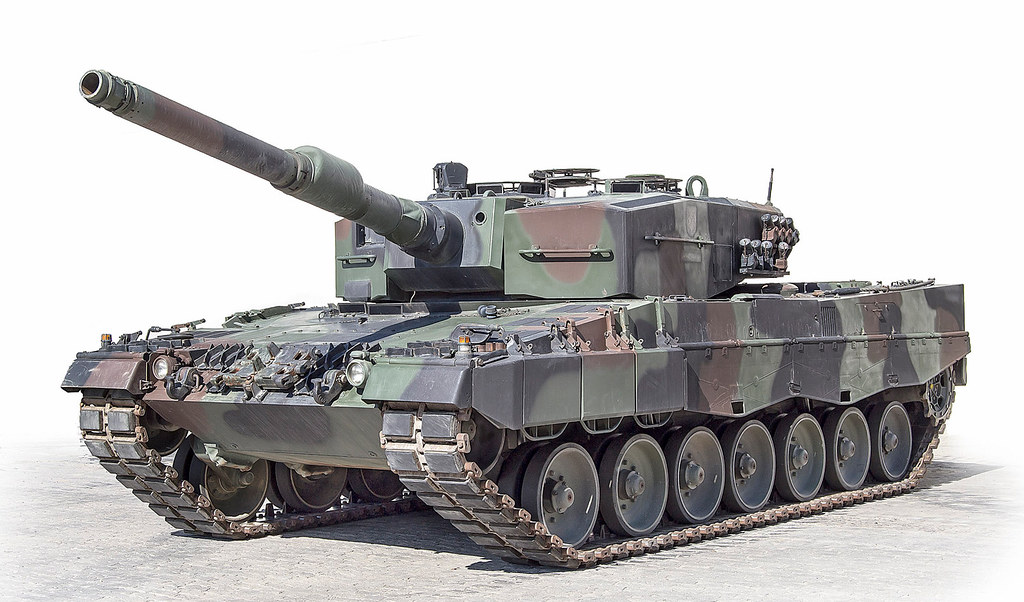 The Leopard 2A4 preserved in the Museum of Armored Units of El Goloso, in Madrid. Unlike the more modern Leopard 2E, the Leopard 2A4s still shown the three-color NATO camouflage, as they were bought second-hand from Germany (Photo: Ejército de Tierra).

The 1997 floods that affected the Leopard 2A4 assigned to Badajoz

It should be noted that part of this stored fleet of Leopard 2A4s was damaged in 1997 by floods in Badajoz. Antonio J. Candil Muñoz told this in the Ejércitos Magazine in July 2010 (you can read the article here): "Between November 5 and 7, the heavy rains caused two tributaries of the Guadiana River to rise, and the flooding of a part of the city –causing victims-, including the quartering of the RIMZ Castilla 16, and the entire tank battalion, and all the Leopard 2A4s being practically buried under water. It was a colossal disaster. Civilian losses were heavy and the tank battalion was practically erased from the ET deployment."

Candil adds: "In the Regiment, on the other hand, although most of the cars were parked and with hatches closed, some were not. The painting was Dantesque. When the waters receded, and the situation cleared up a bit, some car or commercial vehicle that had been dragged by the flood appeared on some tank. All tanks were affected, some very seriously. The directions of fire, the optics, all the electronics, motors… It is impossible to describe. The worst thing was not the water, but the mud, which entered everywhere." The aforementioned author adds: "The BRIMZ XI Leopard tank battalion (44 tanks) would take more than two years to become operational again." 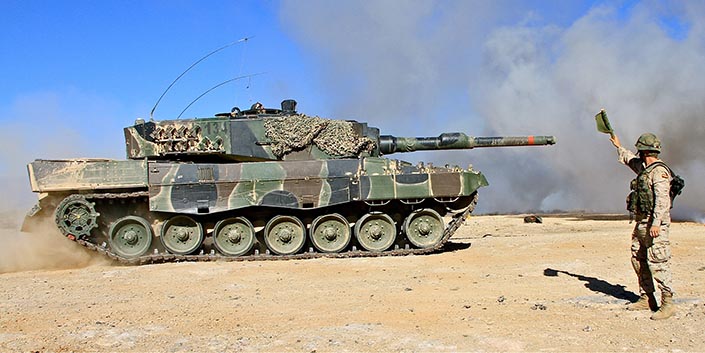 One of the Leopard 2A4 main battle tanks of the Cavalry Regiment "Montesa" No. 3 during maneuvers in October 2014 (Photo: Ejército de Tierra).

Much has been said about the Leopard 2A4 in relation to its poor role in the Turkish Army in the Syrian War, where several units were destroyed and even captured by ISIS terrorists. It should be noted, however, that the Turks used these vehicles in an environment, the urban one, for which they are not suitable (the Leopard 2s were intended to defend Germany on rural battlefields in the east of the country during the Cold War). In addition, the highly trained commanders and crews of these tanks suffered from the purges that followed the failed July 2016 coup in Turkey, which severely reduced the capabilities of their Leopard 2A4 units. In good hands and in the open field, this tank is still a very capable model, and certainly superior to the T-72s that make up the bulk of the Russian armored fleet in Ukraine.