The Ukrainian forces have launched it in their counteroffensive in Kherson

The Russian invasion of Ukraine is being a new example that technology has not banished more traditional tools in military life.

One of the oldest of these tools is heraldry, which emerged in ancient times to distinguish armies and was widely developed in the Middle Ages for the same purpose. In a world where technology provides tools such as the IFF to distinguish friends from enemies, visually differentiating one from another remains a challenge and something very necessary, especially in a war scenario in which both sides have many weapons systems in common, as is the case with Ukraine and Russia. In the first days of the invasion various marks were observed on Russian military vehicles, and among all of them, the letter Z has ended up becoming a distinctive symbol of the invaders, being painted on many of its vehicles on different fronts.

Until now, Ukrainian vehicles have been distinguished by their pixelated camouflage and also by flying the blue and yellow national flag. However, Ukraine has received military vehicles from other countries (such as T-72s sent by Poland and the Czech Republic) that have been sent to the front without changing their paint. Likewise, Ukraine is seizing large numbers of Russian vehicles, often crossing out the "Z" markings on them.

In recent days, images of the Ukrainian counteroffensive in the Kherson region have been circulating, showing the mark that Ukraine's defenders seem to have chosen to distinguish their vehicles: a white cross. There are large ones, covering the entire surface of the vehicle, and other smaller ones. The choice of the cross has a certain logic, since it is an easy symbol to distinguish from the Z, and also the emblem of the Ukrainian Armed Forces includes a cross. It should also be borne in mind that Ukraine is a predominantly Christian country (around 80% of Ukrainians belong to different Christian denominations).

Let's look at some examples. In the following video we can see three Ukrainian military vehicles with large white crosses (an infantry fighting vehicle BMP-1, an MRAP Mastiff and an armored YPR-765):

Below these lines, a Ukrainian vehicle with two painted white crosses (I can't distinguish the model). In the background are three old KS-19 anti-aircraft guns captured from the Russians (source: zloneversleep1). 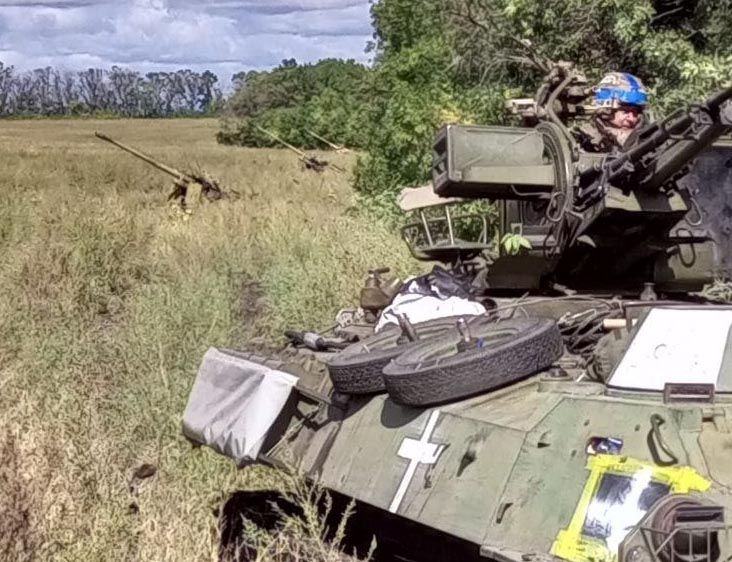 The turret of a BMP-1 infantry fighting vehicle painted with a white cross (source: praisethesteph). In this case, the cross covers the entire vehicle. 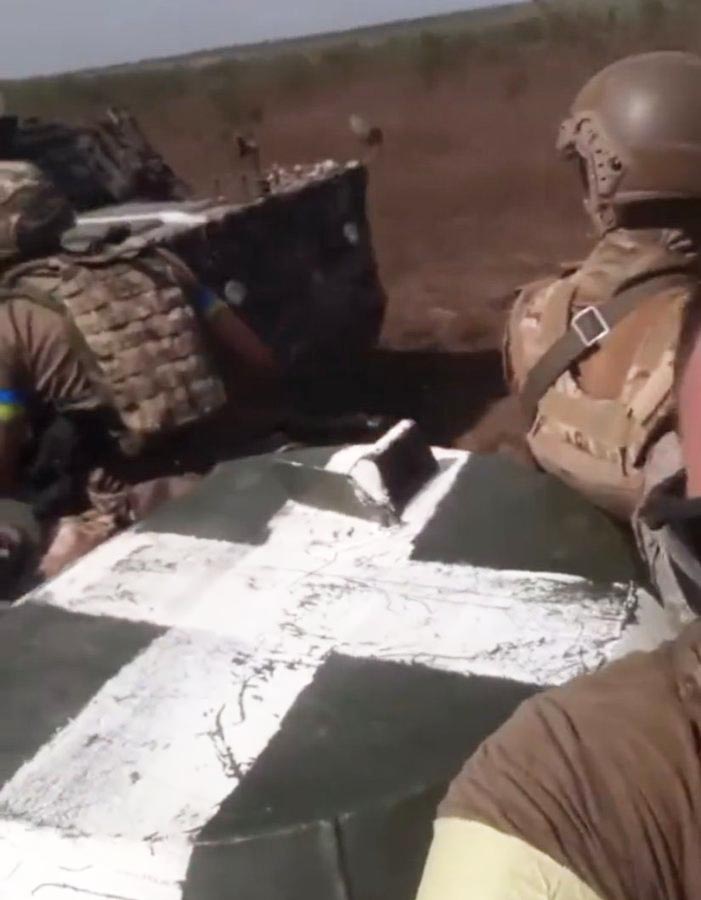 An armored Ukrainian BTR-80 with a white cross painted on its front (source: balakleya_live). 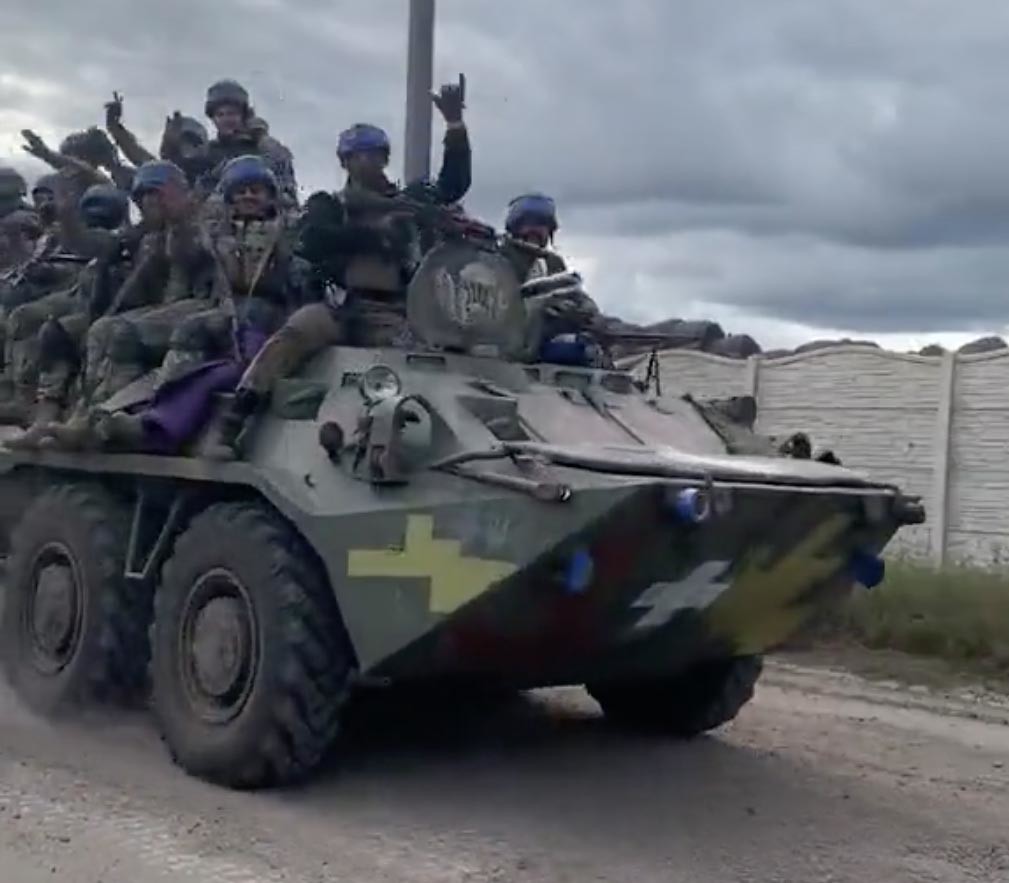 The same BTR-80 as in the previous image, seen from behind. It bears a white cross on the back and another on the side of the vehicle. 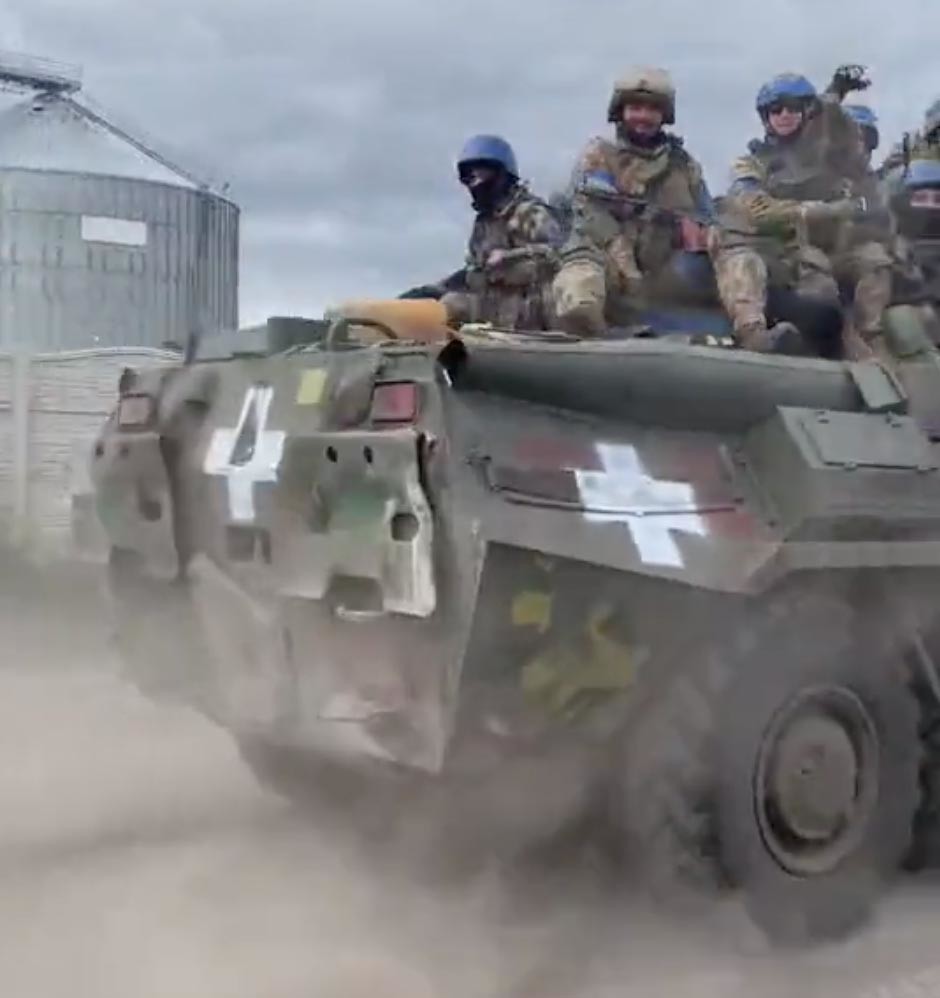 Another Ukrainian BTR-80, this time with a larger white cross (source: balakleya_live). 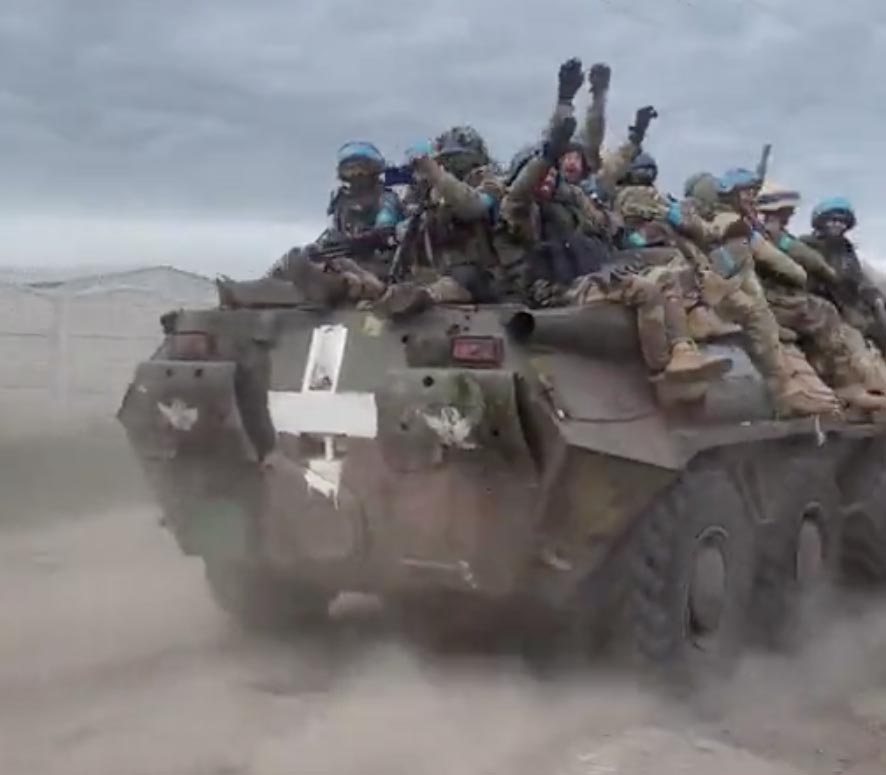 A BTR-80 and several Ukrainian SUVs, all decorated with white crosses (source: balakleya_live). 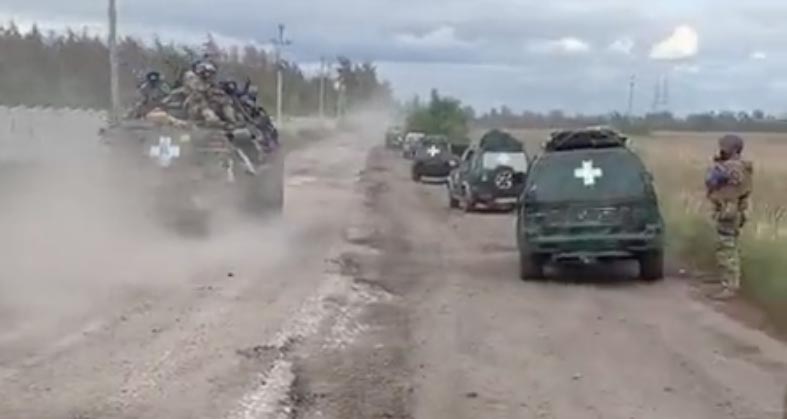 Below, a Russian BMP-1 captured by the Ukrainians. A white cross has been spray-painted on the right rear door (source: balakleya_live). 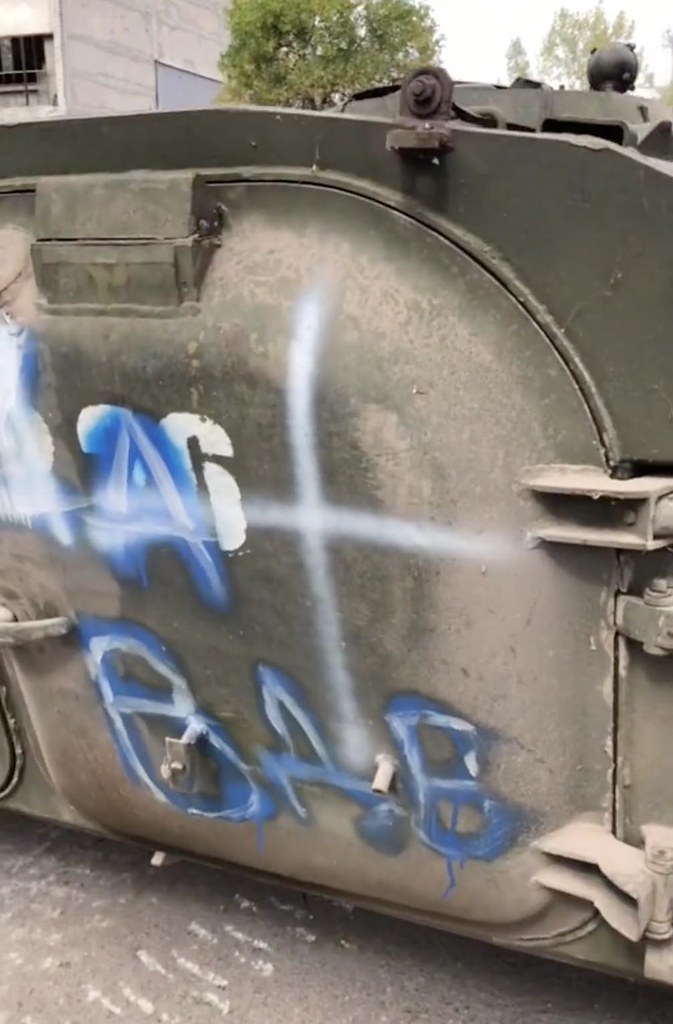 The same BMP-1 from the previous image, seen from the front. You can see the scratches that have been made to the Russian "Z", and next to it a white cross. 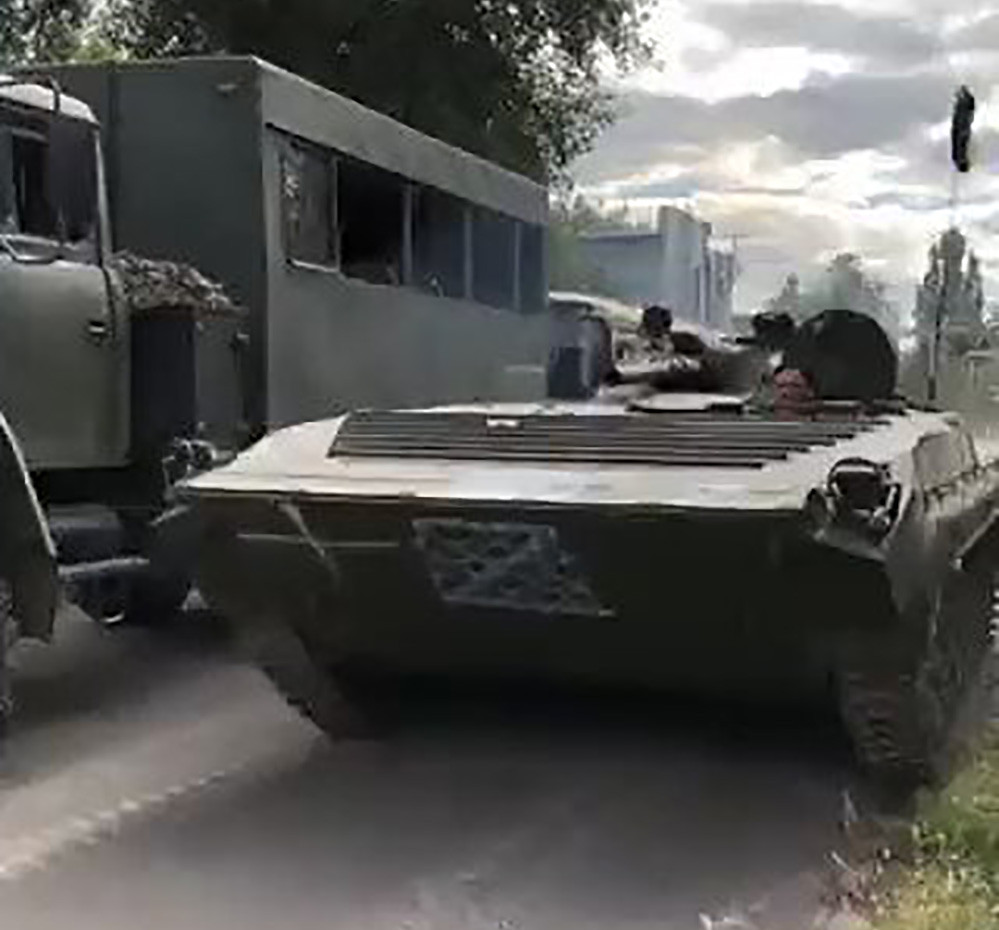