Ukrainian soldiers remove the totalitarian paraphernalia of the invaders

Lowering a communist flag: symbolic images of the Ukrainian counteroffensive

The military counteroffensive launched by Ukraine in the Kherson region a few days ago had one of its most successful days on Wednesday.

In the framework of this counteroffensive, images of Ukrainian ambushes against the invading forces and Russian soldiers being captured by the Ukrainians have proliferated on social networks. Also, Russia yesterday suffered one of its days with the most material losses of these six months of invasion: 12 tanks, 12 armored vehicles, 19 infantry fighting vehicles, a command vehicle, a pontoon bridge, 6 artillery pieces, 3 multiple rocket launchers and other vehicles, in addition to a Sukhoi Su-25 attack aircraft. These are verified losses with images by Oryxspioenkop.com. If every day were like this for Russia, Putin would end up running out of armed forces.

The symbolic scene recorded in the liberated town of Nova Husarivka

Among the images of the Ukrainian counteroffensive released yesterday there is a particularly symbolic one. In it we see soldiers of the 1st Special Purpose Separate Brigade of the Ukrainian Army in the town of Nova Husarivka, liberated this Wednesday and which is a district of the Balakliya municipality, in the Kherson region. In the video we see two soldiers from that brigade lowering a communist flag hoisted next to a building in that town (at the end of the video a sign appears in Ukrainian indicating that it is the headquarters of the District of Nova Husarivka, of the Municipality of Balaklita, in the Kherson region, along with its opening hours to the public). The video was posted yesterday by Ukrainian journalist Taras Berezovets, who is now official of the said brigade:

Berezovets published yesterday a photo in which he and another Ukrainian soldier pose showing this war trophy, a replica of the Red Army's 150th Division, known in Russia as the "Victory Banner" for having been hoisted above the Reichstag in Berlin on May 1, 1945. 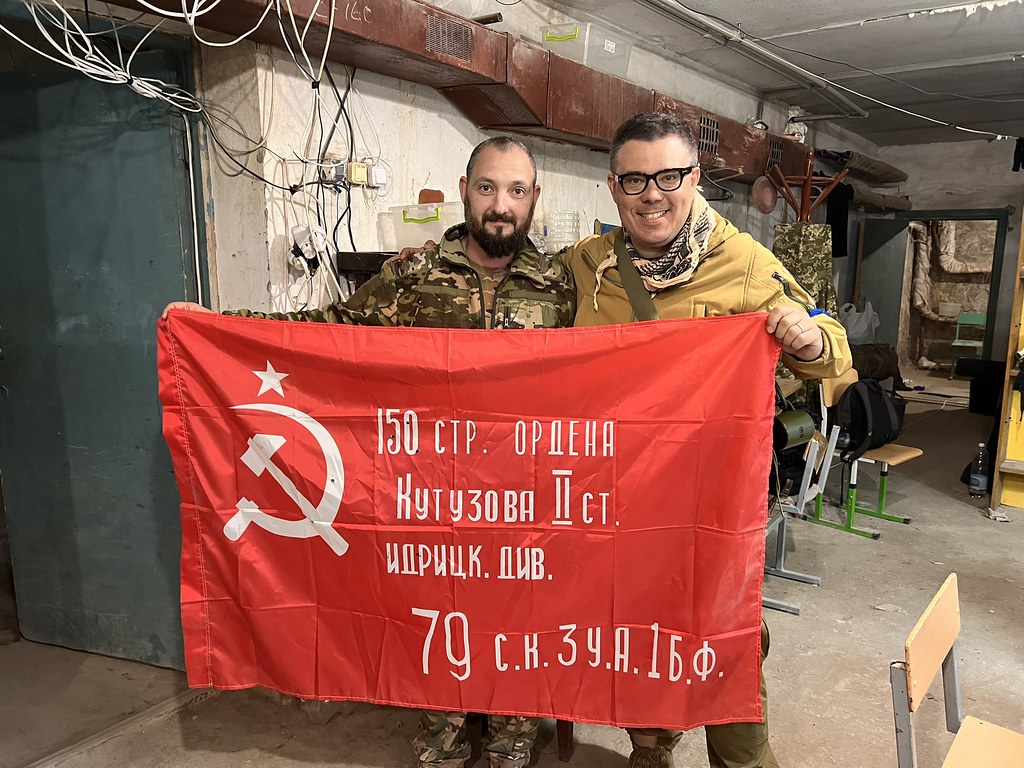 In the Kherson region, the russian occupiers have raised communist flags and they have installed statues of the soviet dictator Lenin, in an exhibition of totalitarian paraphernalia that agrees with the murders, torture and rape they are committing against the Ukrainian military and civilians.