The images show a large presence of the Spanish contingent

The NATO battalion in Latvia shows its more than 200 vehicles, including Spanish

After the Russian invasion of Ukraine, NATO reinforced its military presence on its eastern flank, in order to provide more security to the most threatened countries.

In the wake of Russia's annexation of Crimea, NATO has already deployed four battalions deployed in Estonia, Latvia, Lithuania and Poland. After the invasion of Ukraine, the Atlantic Alliance deployed another four battalions in Slovakia, Hungary, Romania and Bulgaria. Spain has been contributing for years to the battalion deployed in Latvia, with troops from the Army.

The NATO battalion in Latvia, named eFP Battle Group Latvia, is the most varied from the eight battalions deployed by the Alliance on its eastern flank. It is made up of personnel from Canada (which has command of the group), Albania, the Czech Republic, Slovakia, Slovenia, Spain, Iceland (which contributes civilian experts in communications, since that country does not have Armed Forces), Italy, Montenegro and Poland. Currently, most of the Spanish contingent is made up of personnel from the Brigada "Guzmán el Bueno" X and the Logistical Support Group No. 21 (AALOG 21).

The Spanish contingent has Leopard 2E battle tanks, ASCOD Pizarro infantry fighting vehicles, M-113 armored transports (in their versions mortar carriers and sappers), M-109 self-propelled howitzers (this is the first time the Spanish Army has deployed them abroad) and M-548 ammunition vehicles, in addition to of VAMTACs and other types of vehicles. Yesterday the eFP Battle Group Latvia published a video in which it exhibits its more than 200 vehicles, including the aforementioned Spanish military media:

You can see below some screenshots of the video, with some comments. 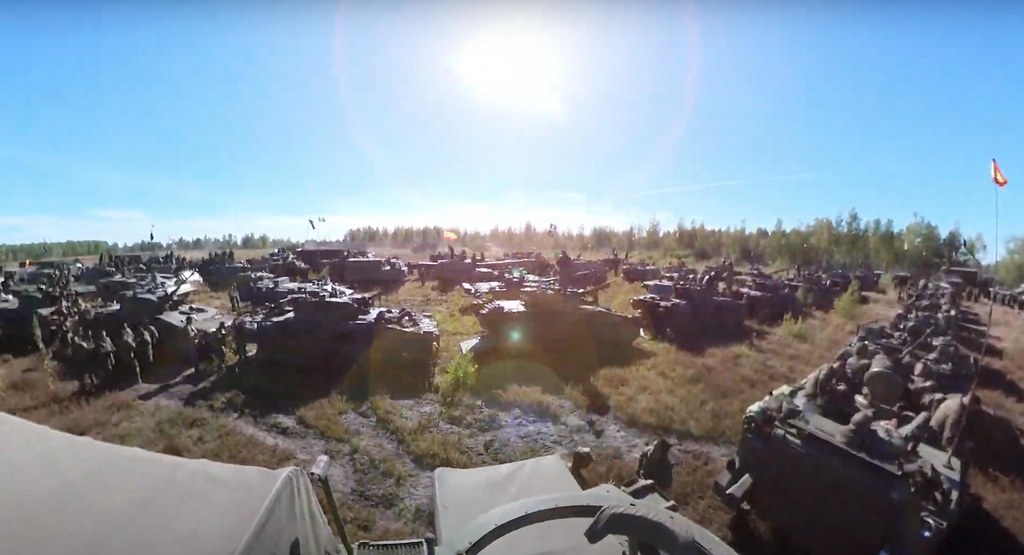 An interesting image in which we see some of the vehicles of the Spanish contingent in Latvia. In the background we can see an M-109 self-propelled howitzer (along with a Polish PT-91 tank) and behind it a vehicle of ammunition M-548. Closer we see a row of ASCOD Pizarrro infantry fighting vehicles, and to the right are some M-113s. 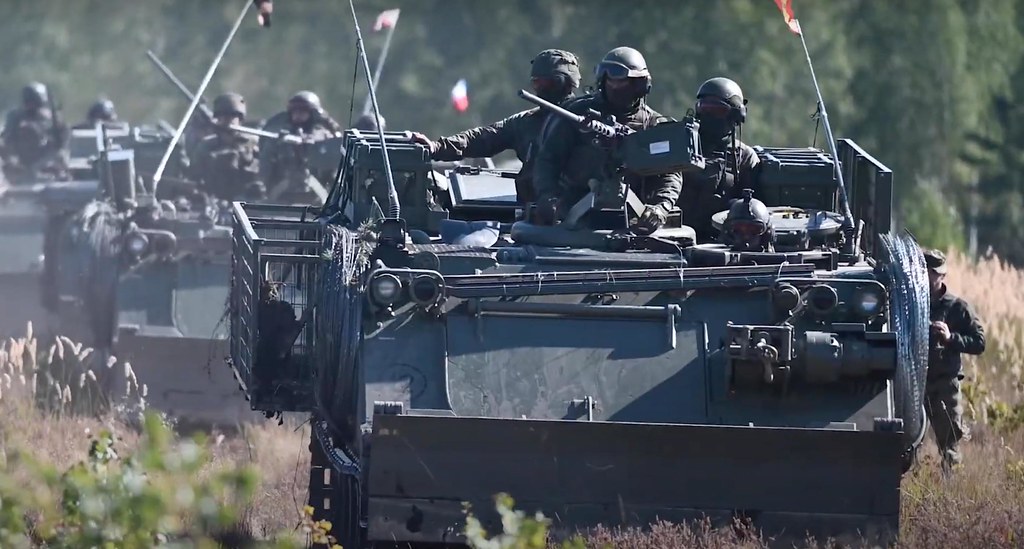 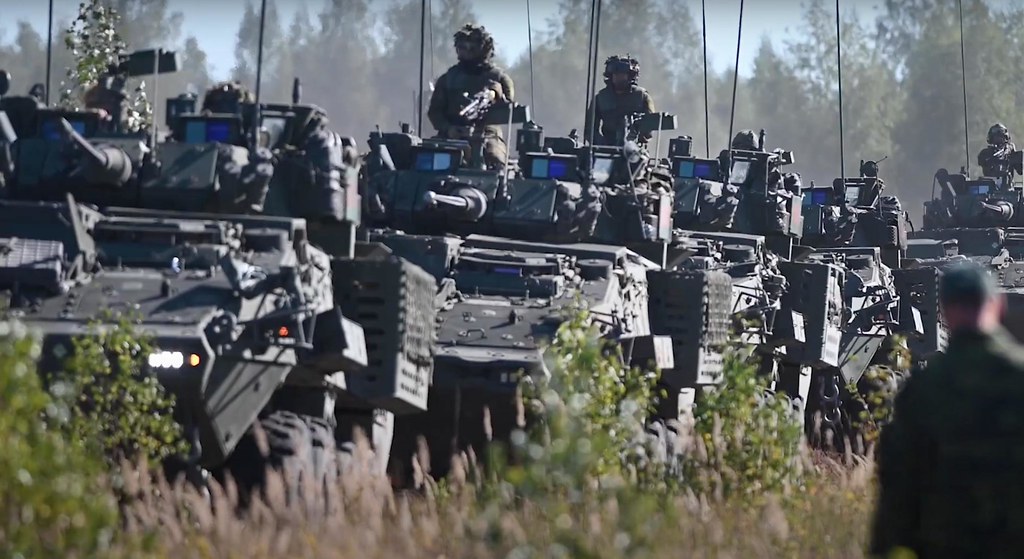 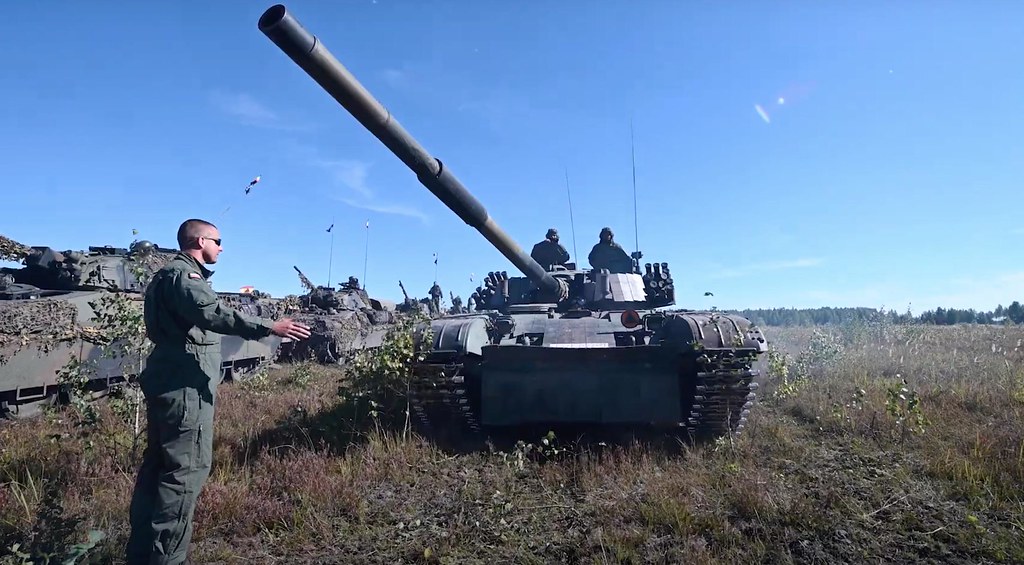 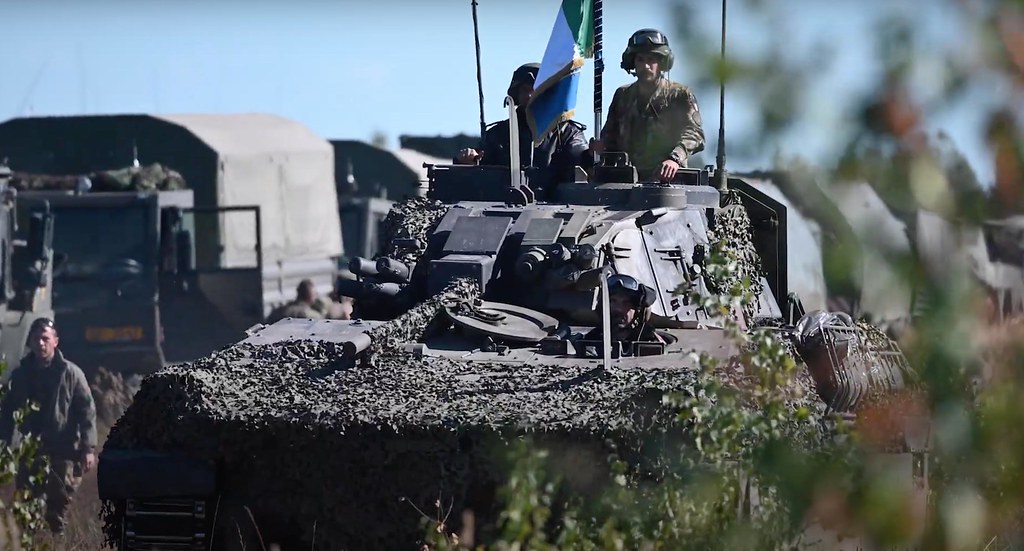 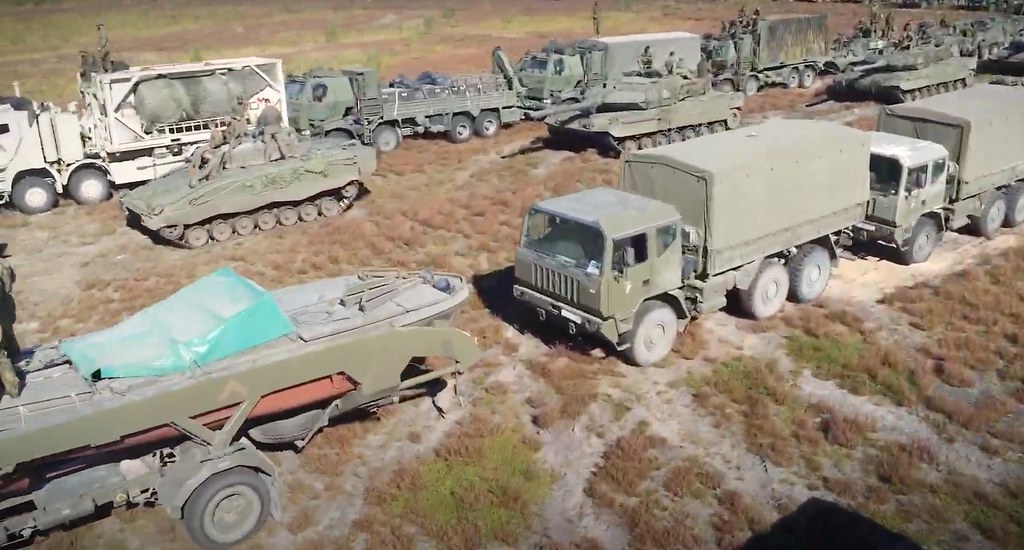 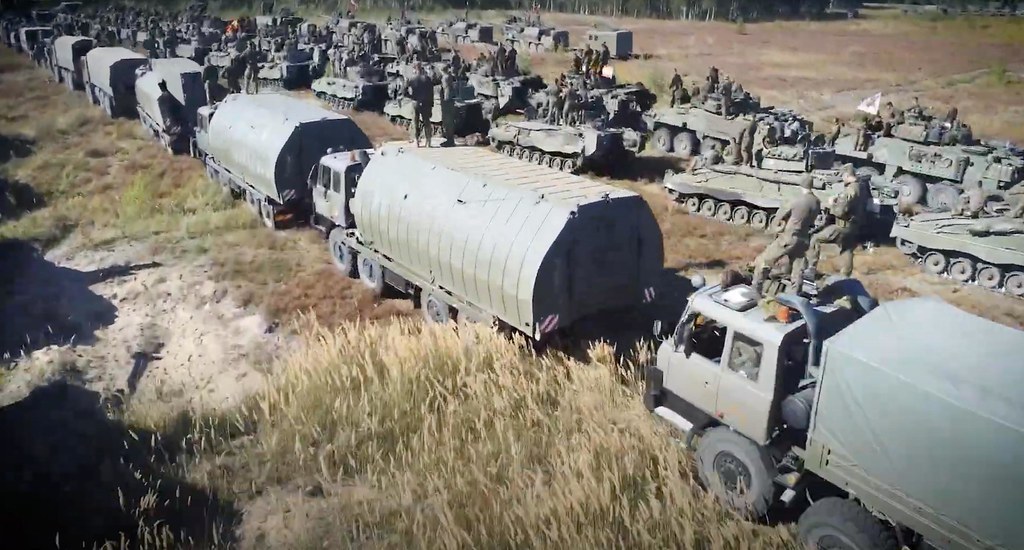 In the foreground, the Tatra 815 PPD PMS trucks of the Czech Army pontoon unit. Behind them is a row of ASCOD Pizarro from the Spanish Army. 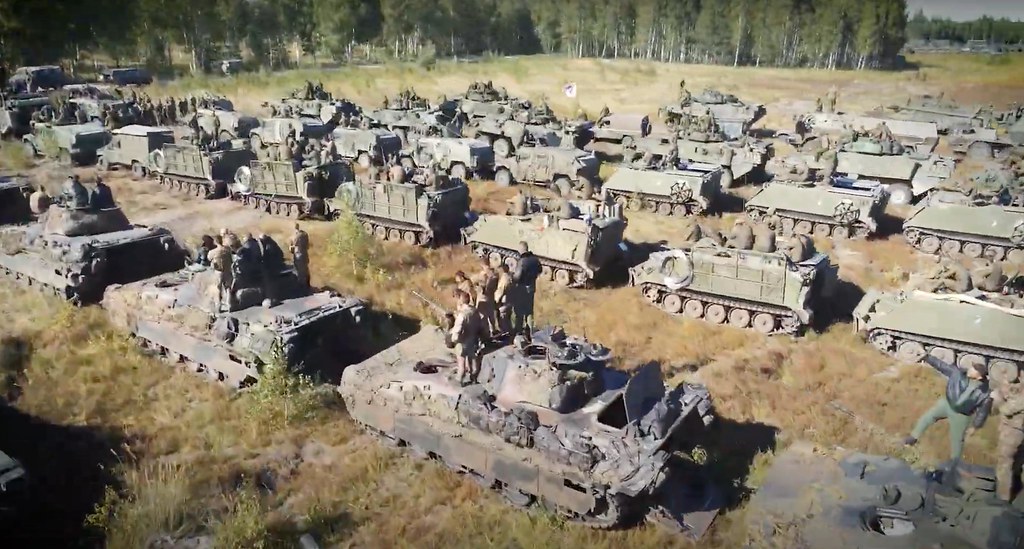 In the foreground, a row of Dardo infantry fighting vehicles of the Italian Army. In the next row are six Spanish M-113 VCZ sapper combat vehicles. More Spanish vehicles appear in the third row: three M-113 mortar carriers and in front of them five VAMTAC ST-5. 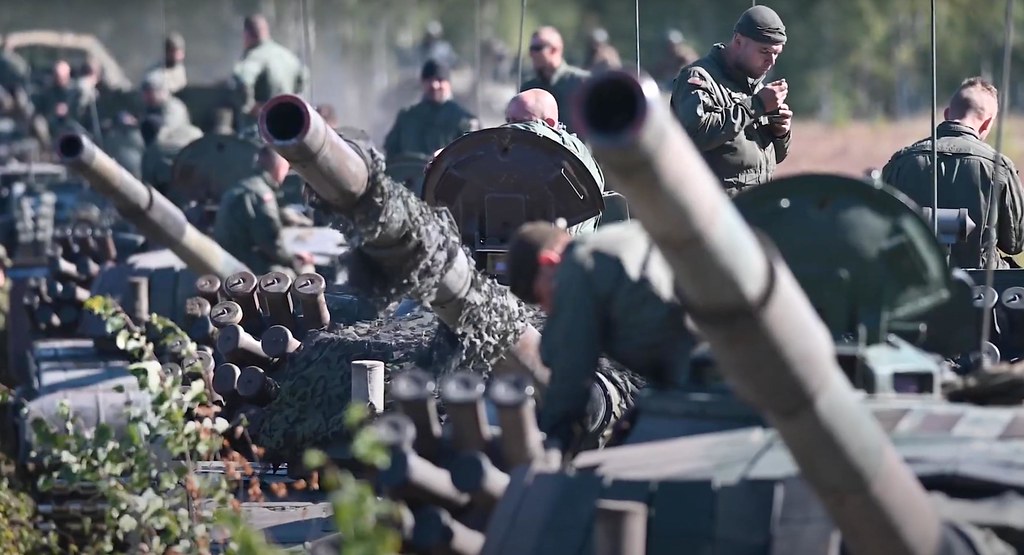 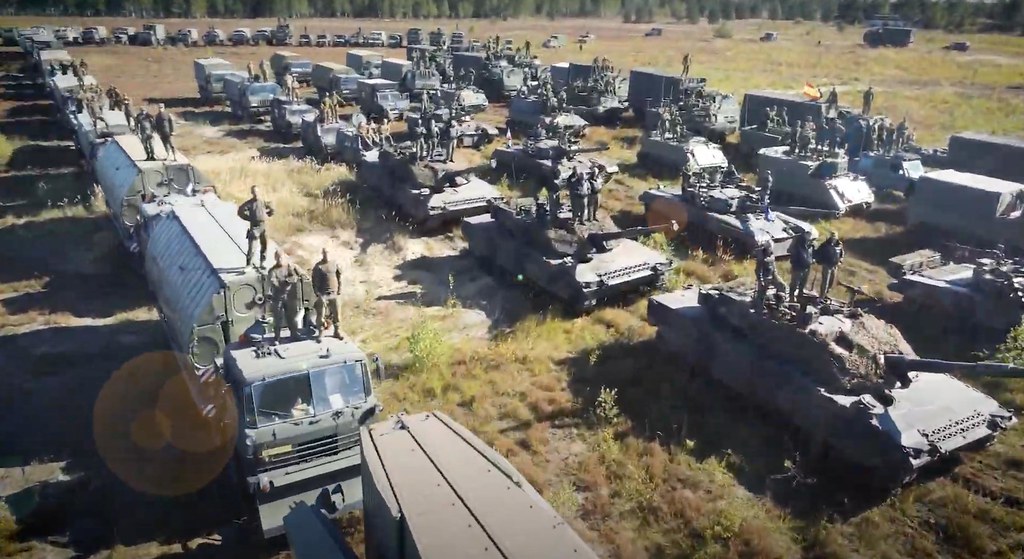 Several Tatra 815 PPD PMS from the Czech Army pontoon boat unit, in the left row. On the right there are three C1 Ariete battle tanks of the Italian Army. In the third row are four PT-91 Twardy battle tanks of the Polish Army. In the fourth row we see several Spanish vehicles: from right to left, an ammunition vehicle M-548, a command vehicle M-577, a TOA M-113, a self-propelled howitzer M-109, another M-113 and two trucks. Iveco-Pegaso M.250.37WM. 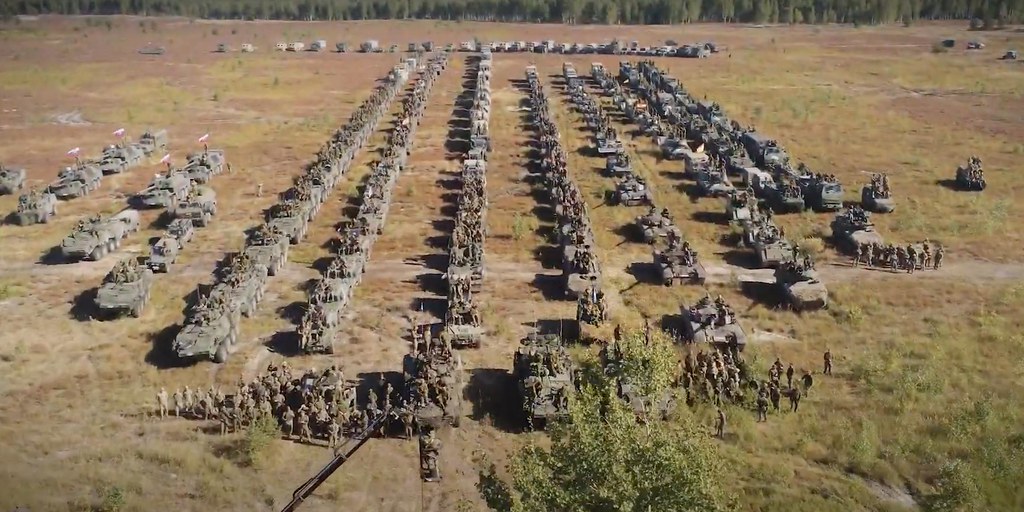 An image of the entire battalion. On the left are four SpGH Zuzana self-propelled howitzers of the Slovak Army, with flags of that country. In the first of the long rows, starting from the left, there are several B1 Centauro armored cavalry vehicles of the Italian Army. The second and third rows are made up of Spanish vehicles, starting with VAMTAC ST-5. Several more Spanish vehicles appear in the third row starting from the right: three M-113, one M-109, one M-548, another M-109, an M-557 and another M-109.