The owner of Tesla yesterday gave an unusual twist to the attitude he has been showing towards Ukraine, addressing this country with a proposal that no decent country would accept.

Elon Musk's first thought was to launch a poll of his followers in which proposed the following "peace" plan:

"Ukraine-Russia Peace:
- Redo elections of annexed regions under UN supervision. Russia leaves if that is will of the people.
- Crimea formally part of Russia, as it has been since 1783 (until Khrushchev’s mistake).
- Water supply to Crimea assured.
- Ukraine remains neutral."

"This is highly likely to be the outcome in the end – just a question of how many die before then", Musk added. Interestingly, Musk's "peace" plan does not include asking Russia to withdraw from the country it has invaded, which would be the logical thing to do when we are talking about a war provoked by Russia. He doesn't even ask for a UN intervention to stop the atrocities being committed by the Russians in Ukraine. The owner of Tesla and Space X has a very curious way of showing concern for the lives of Ukrainians.

On the contrary, the four points that Musk proposes imply giving in to the demands of the Kremlin, and to accept them would be to admit a violation of International Law and the national sovereignty of Ukraine. Musk does not even consider that the "elections" he proposes be held prior to the departure of the invaders from those territories. What kind of free elections can there be in a territory subjected to the military occupation of a foreign country? An invading country that, in addition, is dedicated to deporting, torturing and murdering civilians, and that has caused an exodus of Ukrainians fleeing that invasion.

Russia recognized Ukraine's borders in an agreement that Putin has violated

Let us also remember that the USSR accepted Ukraine's sovereignty over Crimea when the country became independent in 1991. Furthermore, that in the 1994 Budapest Memorandum, whereby Ukraine handed over its nuclear weapons to the Russian Federation, which undertook to "respect the independence and sovereignty and the existing borders of Ukraine", to "refrain from the threat or use of force against the territorial integrity or political independence of Ukraine and "that none of their weapons will ever be used against Ukraine except in self-defense or otherwise in accordance with the Charter of the United Nations", which are not the reasons for the current invasion.

What Musk intends to suggest to Ukraine is that it submit to Russia's blackmail, and that it give in to Putin's demands on the grounds that the Russian invasion is causing people to die. If that plan were accepted, a year from now Russia could use the same duress to seize more of Ukraine's territory, and then useful fools like Musk and others would surely again suggest Ukraine give in so there would be no more dead. And so on until the disappearance of Ukraine. In the end, Musk's proposal implies renouncing International Law and accepting violence as the supreme norm, through which a stronger country can get what it wants from weaker countries.

The survey launched by Musk turns against his 'peace' plan

Elon Musk has not only been totally wrong with that proposal, but has also turned against him. At the time of writing these lines, a little before 03:00 CET and with almost 2 million votes, 61.9% had voted against Musk's "peace" plan. 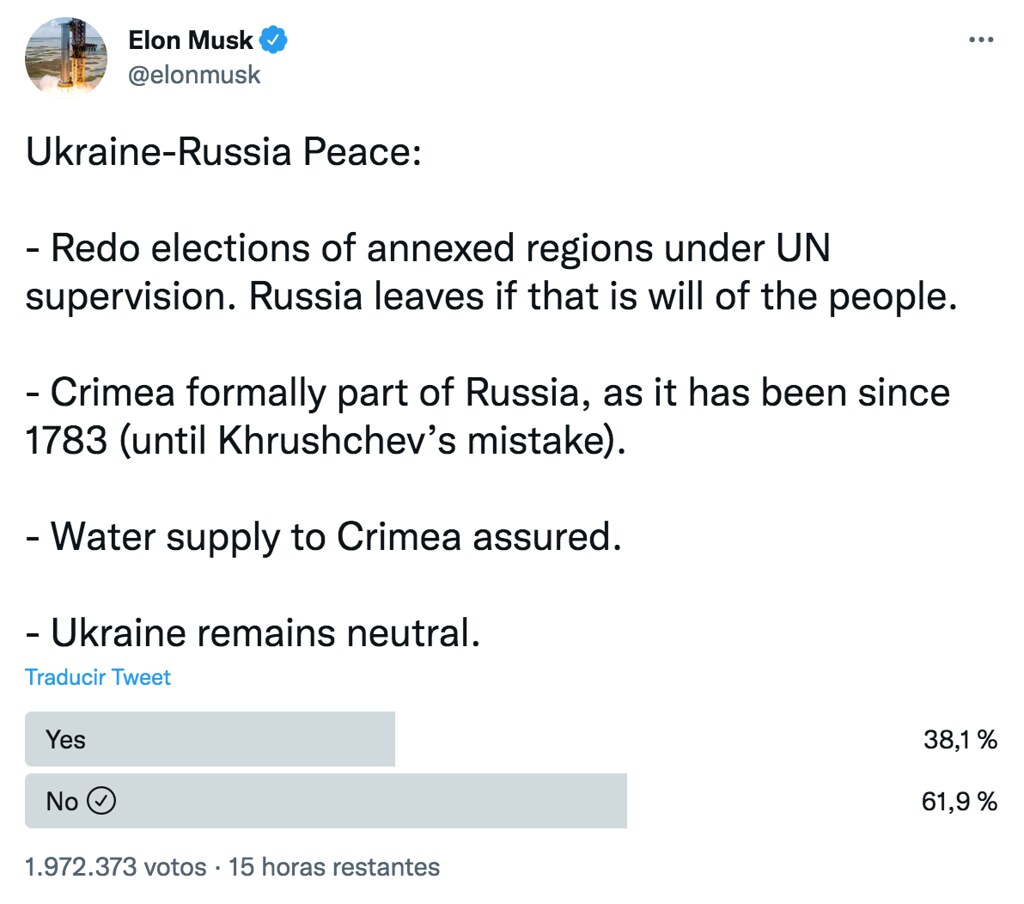 Zelensky responds to Musk with his own poll 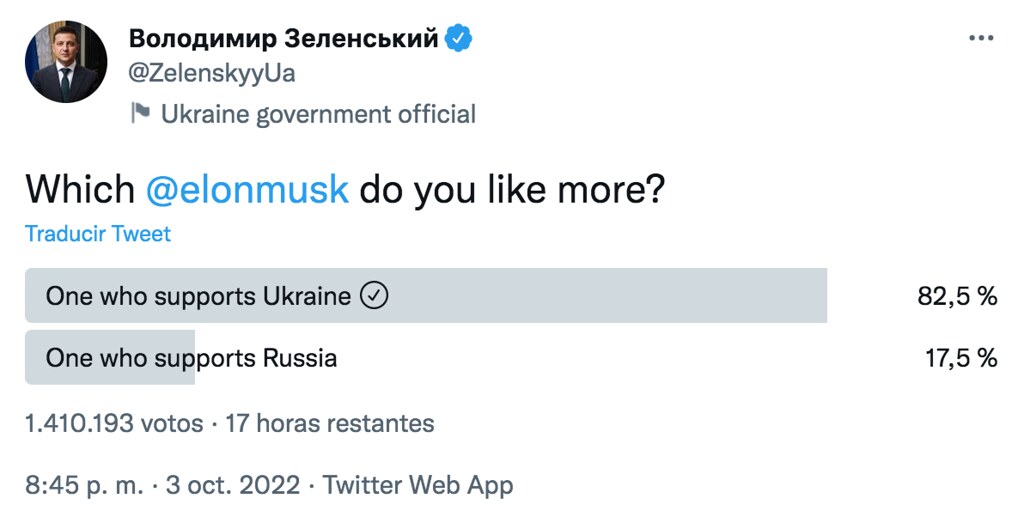 Zelensky's mention of Musk's support for Ukraine refers to a message from the owner of Tesla published on March 5, in which it stated "Hold Strong Ukraine" between six Ukrainian flags. Like someone who changes his jacket or pants, and in the midst of a successful Ukrainian counteroffensive, Musk has gone from supporting Ukraine to signing the Kremlin's theses. It is something unusual, and thousands of people are criticizing it on Twitter for it.

Ukraine's foreign minister explains what some disguise as 'peace'

Ukrainian Foreign Minister Dmytro Kuleba has written a message in English on his Twitter, without alluding to Musk but clearly answering his arguments: "Those who propose Ukraine to give up on its people and land — presumably not to hurt Putin’s bruised ego or to save Ukraine from suffering — must stop using word “peace” as an euphemism to “let Russians murder and rape thousands more innocent Ukrainians, and grab more land”."

The response to Musk from the president of Lithuania

Musk's message has also received a reply from the President of the Republic of Lithuania, Gitanas Nausėda, who wrote the following: "Dear @elonmusk, when someone tries to steal the wheels of your Tesla, it doesn't make them legal owner of the car or of the wheels. Even though they claim both voted in favor of it." Although they have far fewer followers than Tesla's owner, at the time of this writing both Kuleba's message and Nausėda have far more likes than Musk's plan, which it is very significant.

Significantly, one of the harshest responses to Musk has been written by a Russian, chess player Garry Kasparov, a well-known opponent of Putin, who has posted a thread on his Twitter account replying to Musk: "This is moral idiocy, repetition of Kremlin propaganda, a betrayal of Ukrainian courage & sacrifice, and puts a few minutes browsing Crimea on Wikipedia over the current horrific reality of Putin's bloody war. Who are you to reward years of Putin's war crimes with Ukrainian blood and land? To declare done what evil crimes must be undone? It is not too late to delete this and say you were high. Please do."

Kasparov also counters some of Musk's claims: "1) Ukraine was neutral in 2014 and Russia attacked & occupied it, invading again this year. Never again. 2) The greatest nuclear threat comes from concessions to Putin, not standing up to him. 3) The only real peace will be when Russia is defeated. 4) Legitimizing the change of national borders by force is the way of dictators, not the free world. 5) Ukrainian people and territory are not baubles to be traded or sold by third parties, let alone to a dictatorship committed to their ethnic cleansing and slaughter."

Does Musk still remember those who fell to preserve Freedom?

I don't want to end these lines without remembering the message written by Musk on May 30th : "In remembrance of those who fell to preserve the light of freedom". Those who gave their lives for Freedom did so precisely in the face of tyrants and criminals like Vladimir Putin. Those who are doing this now are the brave Ukrainian fighters who are fighting for their freedom and independence against the Russian invaders. What has happened in these months for Musk to go from honoring those who gave their lives for freedom, to insulting the Ukrainian people with a "peace" plan that seems to have been devised by Putin?