The controversy over the publication of a communist stamp by Correos de España has served to portray, once again, the supporters of that ideology.

Yesterday, the Spanish journalist Luis del Pino published a message in English denouncing the the outside that scandalous stamp. The message read: "Spanish government, led by Pedro Sánchez from the Socialist Party, pays homage to communist party and communist ideology with an official postage stamp, to be released Nov 14. A humiliating insult to millions of past and present victims of communism worldwide."

Spanish government, led by Pedro Sánchez from the Socialist Party, pays homage to communist party and communist ideology with an official postage stamp, to be released Nov 14. A humiliating insult to millions of past and present victims of communism worldwide. pic.twitter.com/r7m07h6O4d

Yesterday at noon, the official Twitter account of Izquierda Unida (IU, United Left), the electoral brand that the Communist Party of Spain has been using since 1986 and one of the partners in the coalition government of Pedro Sánchez -communist minister Alberto Garzón is a member of the IU-, replied to Luis del Pino mocking his message and stating: "Don Luis is right, the precious stamp of the #CentenaryPCE must of course be an insult to the fascists and nazis that communism stopped the feet throughout the world, and who worked to bring democracy to our country". 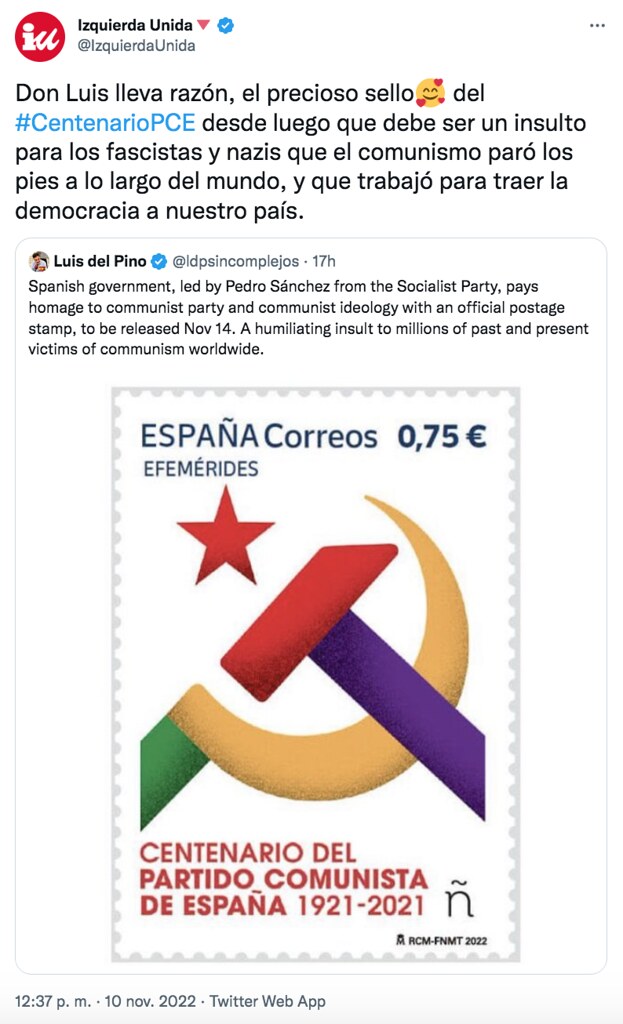 In other words, Izquierda Unida labels those "millions of past and present victims of communism around the world" as "fascists and nazis". One more sample of the kind of political, ideological and moral scum that is the Spanish extreme left in general and the communists in particular.

A totalitarian movement that has killed more than 100 million people

Let us remember that communism has murdered more than 100 million people even in countries where there were no fascist or nazi parties. The vast majority of these victims were murdered by the communist dictatorships for the mere fact of defending different political ideas -liberal, conservative, Christian Democrats, socialists and even dissident communists-, for their religious beliefs -from Christians to Jews to budists and members of other religious confessions-, and also in colossal famines caused by the communist dictatorships with their disastrous policies and affecting entire families, including many children.

As I already pointed out yesterday, in September 2019, the European Parliament condemned the crimes of communism and nazism noting that "the Nazi and communist regimes carried out mass murders, genocide and deportations and caused a loss of life and freedom in the 20th century on a scale unseen in human history." Izquierda Unida not only mocks these horrendous crimes but also justifies them by defaming the victims calling them "fascists and nazis." Let us remember that the extreme left party voted against that European resolution when the opposition proposed endorsing it last year in the Spanish Parliament.

That same extreme left that insults the victims of communism wants to impose its biased and false vision of history on us under the label of "historical memory", while even today it continues to support to all kinds of dictatorships. Attitudes like that of Izquierda Unida fill with reason the countries that have outlawed communism. Totalitarian parties like that should not be legal in any democratic country, nor should the nazi parties be. They are the same scum, only the symbols change.

Spanish legislation now allows action against messages such as that of Izquierda Unida. Article 510 of the Criminal Code punishes with one to four years of imprisonment and a fine of six to twelve months for those who "publicly deny, seriously trivialize or glorify the crimes of genocide , against humanity or against persons and property protected in the event of armed conflict, or exalt their authors". Point 2 of that article punishes with six months to two years of imprisonment and a six to twelve month fine for those who "injure the dignity of people through actions involving humiliation, contempt or discredit of any of the groups referred to in the previous section".

Photo: Alberto Garzón, a member of the United Left and current Minister of Consumer Affairs in the government of Pedro Sánchez, at a meeting of the Communist Party of Spain next to a large portrait of the Soviet dictator Lenin in 2017.