The Kremlin has said that Castro defended "rights and freedoms"

Kremlin propagandists deny that Vladimir Putin is a communist, but the facts remain more stubborn and convincing than the propaganda.

A square and a monument dedicated to Fidel Castro in Moscow

Yesterday, the Cuban communist dictatorship announced the inauguration of a monument to Fidel Castro in Moscow, in a square with the name of that dictator, located in the Sokol district. The information published by the Cuban regime indicates that the current dictator of the island, Miguel Díaz-Canel, attended the event, and both he and Putin "paid honors to Commander in Chief Fidel Castro Ruz, in the monument dedicated to his memory that both leaders inaugurated this Tuesday." As announced by the Kremlin, the monument is the work of sculptor Alexei Chebanenko and architect Andrei Bely. 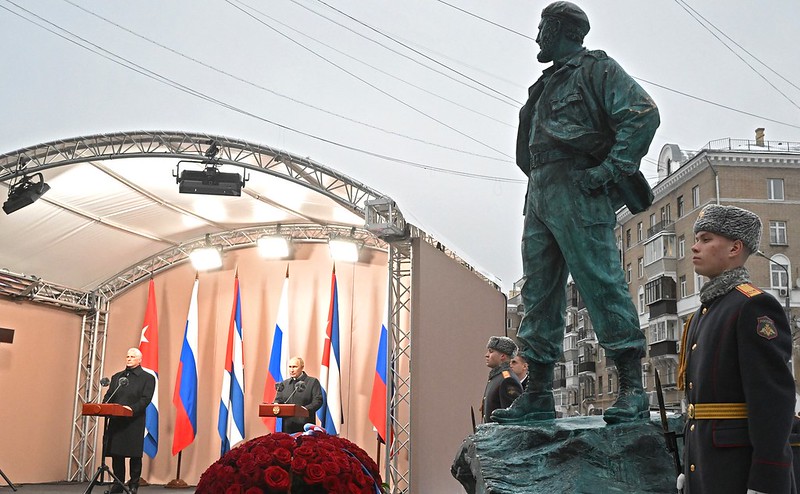 The Kremlin website has published the speech that the Russian dictator addressed to the Cuban dictator, to which called "comrade Díaz-Canel". Among other things, Putin has shown the continuism of current Russia with the Soviet dictatorship: "You know that the Soviet Union and Russia have always supported and support the Cuban people in their struggle for independence and sovereignty We have always opposed any restriction, embargo, blockade, etc. We have always supported Cuba on international platforms. We are seeing that Cuba occupies the same position with respect to our country, to Russia". 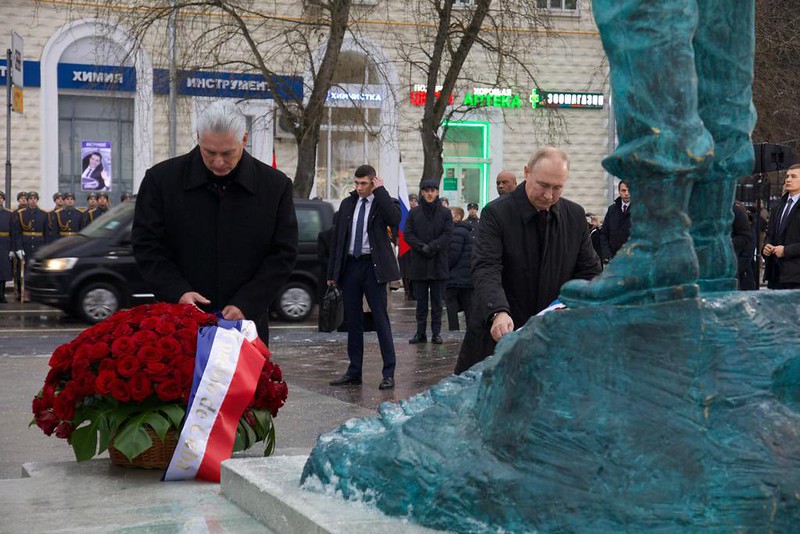 "All this is the result of the traditional friendship started by comrade Fidel Castro", said Putin, who recalled his meetings with the founder of the Cuban communist dictatorship: "I really remember our personal meetings very well, even the details. He was an impressive man." 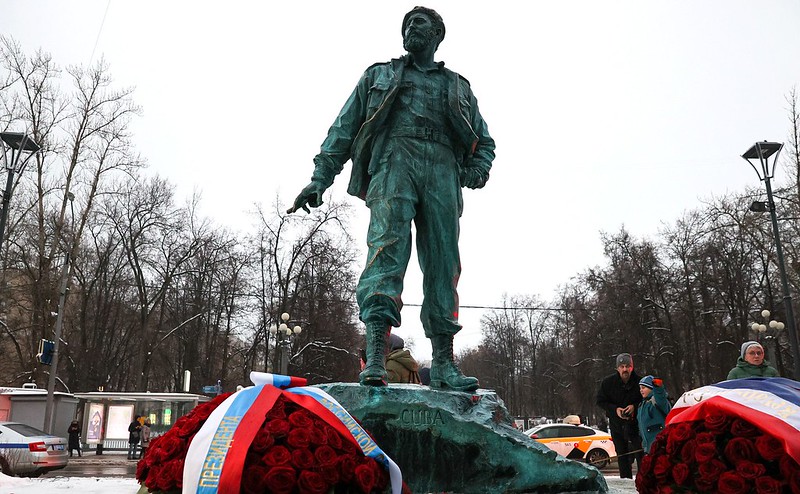 The official Castro website Cuba Información has reproduced the chronicle of RT, one of the media of the Kremlin's propaganda, about the inauguration of the monument: "The sculpture represents Castro on a rock on which the map of Cuba is inscribed. The image tries to reflect the heroic path of the man who defended the rights and freedoms of people in his country, according to a Kremlin statement." Once again, Putin's government misrepresents reality and lies outright: it presents a bloodthirsty dictator as a defender of "rights and freedoms". That says it all about Putin and his regime. 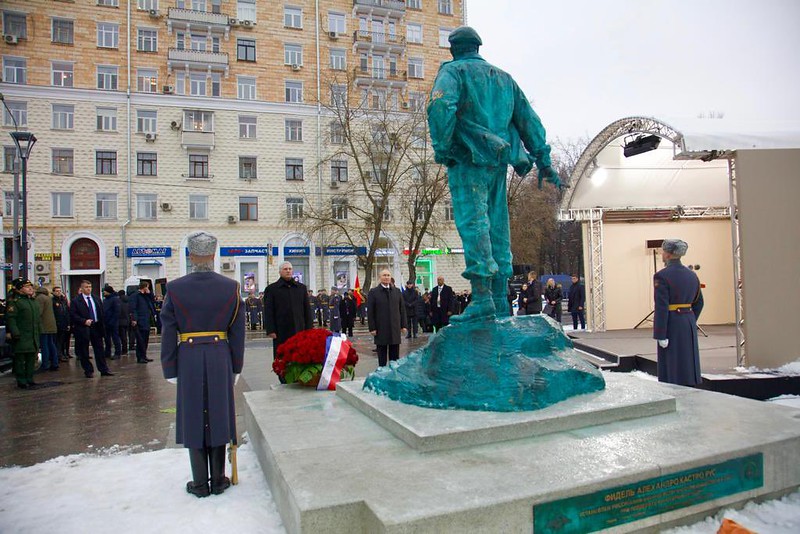 According to RT, Putin affirmed that Fidel Castro dedicated his life to "the selfless struggle for the triumph of the ideas of goodness, peace and justice, for the freedom of the oppressed peoples, for honorable life for ordinary people and social equality". An obscene way of laundering a tyrant who plunged the Cuban people into misery and oppression, violating human rights, violently repressing all criticism of the regime through persecution, imprisonment, torture and murder of those who asked for democracy for Cuba. 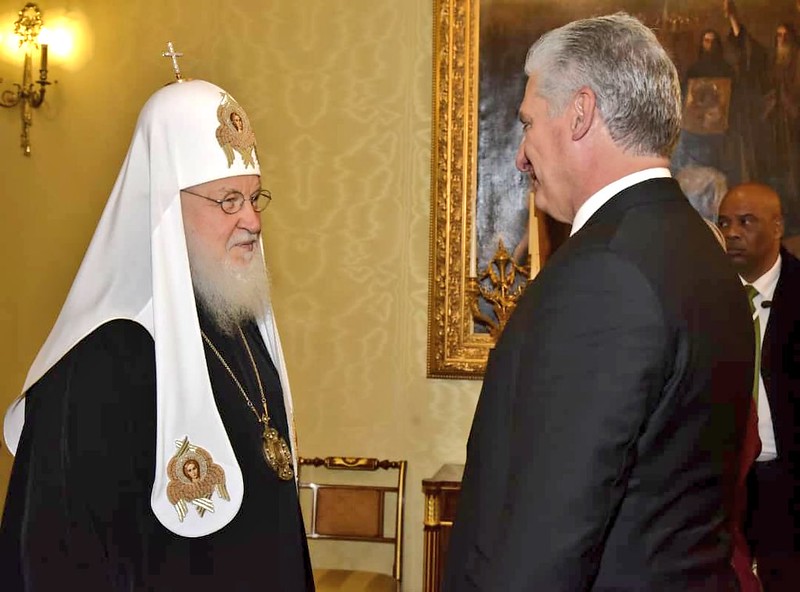 Díaz-Canel's visit to Moscow has not only served to portray, once again, Putin's ideological affinity with the communist dictatorships, but also his servility towards the regime of Patriarch Kiril of Moscow. According to Cuba information, the head of the Russian Orthodox Church has described Cuba as "the island of freedom". The Cuban dictatorship, through its official news agency, Prensa Latina, has stated: "Kiril highlighted the strength of the Cuban people for preserving their sovereignty and independence, as well as their courage and strength to fight against capitalism". One more example of the shameful role of a religious leader who bases his ties with the Kremlin on corruption, and who has amassed a vast fortune thanks to tobacco imports and tax exemptions for that purpose granted by the Kremlin to the Russian Orthodox Church. 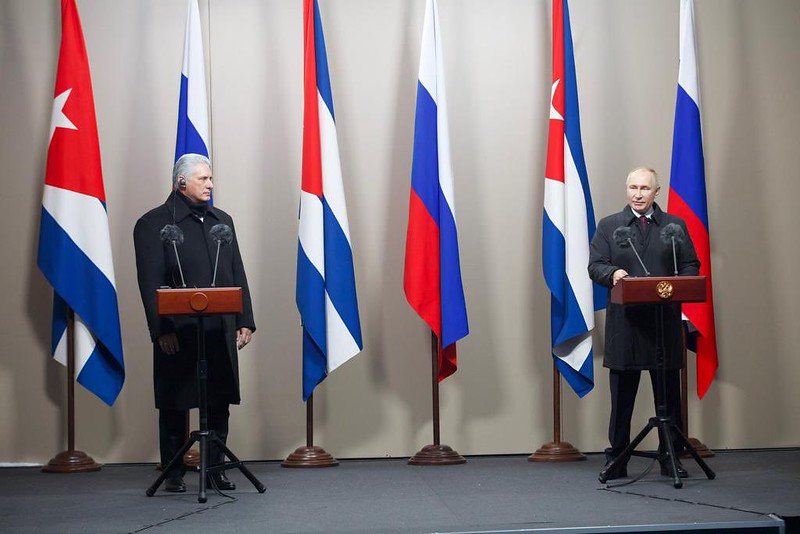 It now remains to be seen how Putin's Western propagandists will resolve this. The European extreme left says that Putin is not a communist, but at the same time the most pro-Russian parties in Europe are precisely the communists: they are the ones that most frequently align themselves with the theses of the Kremlin and those who help spread its propaganda in the European Union. As for the pro-Russian right, they see Putin as a benchmark for Christianity and conservative thought, systematically omitting the facts that show Putin's sympathies for communism and his nostalgia for the Soviet dictatorship. That pro-Russian right, which often declares itself anti-communist, now has to uphold the paradox of justifying a monument to a communist dictator in Moscow inaugurated by its Russian idol.