A Ukrainian company is testing a drone with a range of 1,000 km

Russian media confirm that two airbases in Russia, a long way from Ukraine, have been attacked today, allegedly by Ukrainian drones.

A Russian media reports explosions at two airbases in Russia

This morning, the Russian outlet Readovka reported that the Dyagilevo and Engels air bases have been attacked by drones "Engels is a major bomber operating base and is the only Russian site of operations for the Tupolev Tu-160 strategic bomber", has pointed out this Russian medium.

Engels Air Base was named after communist ideologue Friedrich Engels, and today houses the Sevastopol Guards 121st Heavy Bomber Aviation Regiment, equipped with Tupolev Tu-160Ms, and the 184th Heavy Bomber Aviation Regiment, equipped with Tupolev Tu-95MS. In turn, the Dyagilevo airbase houses a training center for Tu-95 bomber crews. It should be noted that Russia has been using these strategic bombers to launch cruise missile attacks against Ukraine since the start of the Russian invasion.

According to the Russian media The Moscow Times, the attack on the Engels airbase reportedly killed three and damaged two strategic bombers. On December 1, the Ukrainian outlet The New Voice of Ukraine published these satellite photos of Maxar showing that that day there were a dozen Tu-95 and T-160 bombers at the Engels airbase. Now there are two less. 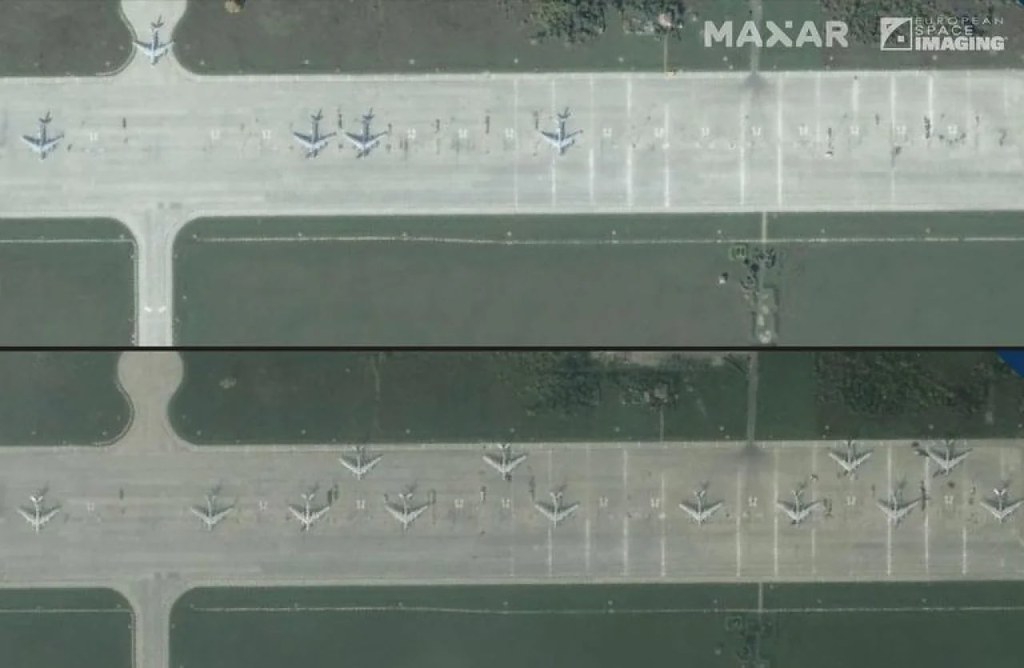 The most striking thing is the scope of this attack. In this map published by Readovka we can see that the Engels air base is about 700 km from Kharkiv, in Ukraine, while the Dyagilevo air base it is about 566 km. The city of Moscow is some 640 km from that Ukrainian city, so it could also have been hit by this attack, if it had been chosen as one of the targets. This is a new leap in this war. Ukraine's message is clear: Moscow is under threat and is no longer a safe city, and the war that Russia has unleashed could now turn against it. 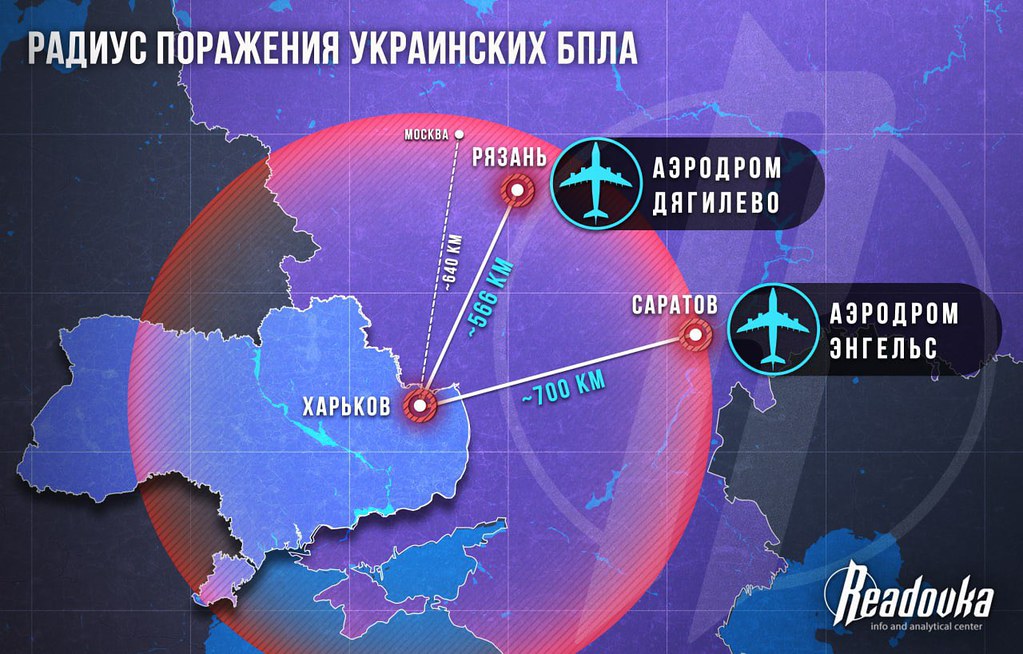 Ukraine is testing a kamikaze drone with a range of up to 1,000 km

On October 17, Defense Express published that Ukrainian company Ukroboronprom is developing a long-range kamikaze drone, capable of reaching targets up to a distance of 1,000 kilometers. These drones would be equipped with a 75 kg warhead. Precisely, this morning Ukroboronprom announced that it has started testing with these new drones. Precisely the same morning that these two explosions were recorded at Russian air bases.

Russia launches 70 missiles against Ukraine: about 60 have been shot down

After news of this attack spread, and with no official confirmation of it from the Russian government, Russia has launched two waves of missile attacks against Ukraine. As noted by Ukrainian journalist Illia Ponomarenko, the Ukrainian Armed Forces have stated that more than 70 Russian missiles were fired at Ukraine, including 38 Kh-101 and Kh-555, 22 Kalibrs, 3 Kh-22, 6 Kh-59 and 1 Kh-31P. Of these, close to 60 missiles have been intercepted. According to the Ukrainian agency Ukrinform, 9 out of 10 missiles launched at kyiv have been shot down.

Ukraine has every right to bring war to the invading country

Of course, Ukraine has as much right to take the war to Russia as the Allies had to take it to Germany after suffering Nazi air raids against Poland, France, Belgium, the Netherlands and the United Kingdom. The Ukrainian people have been enduring attacks against civilian facilities for nine months, attacks that have already caused thousands of deaths: the Ukrainian government reported yesterday, Russia has killed 9,400 Ukrainian civilians, including 461 children, and has left 6,800 injured (all while waiting for new graves to be discovered in occupied territories). The Russian strategy deserves to be qualified as pure and hard terrorism. At least Ukraine has the detail to return the visit by limiting itself to attacking military installations.

A new strategic setback for Russia

What happened today is a new strategic setback for Russia and demonstrates the inability of the invaders to achieve their objectives, seeking to compensate them with missile attacks that are gradually depleting Russia's weapons reserves. Putin seems to have opted for the same strategy of terror that Hitler developed with his V-1s and V-2s, a strategy that failed to prevent German defeat in World War II. Like the nazi dictator, the Russian dictator responds to Ukrainian military milestones with attacks on the civilian population, a clumsy strategy that only further tarnishes Russia's already badly damaged image abroad , and that also confirms the Ukrainian people in the idea that it is worth resisting, because these attacks are a demonstration of the frustration and desperation of the invaders in the face of the successful Ukrainian counter-offensive that has expelled the invaders from northern Ukraine and the western bank of the Dnieper River.

+ UPDATED 18:26h: Russian Defense Ministry confirms Ukrainian attack on its bases. It says that its forces shot down the drones, but that the remains of one of them hit two planes and killed three Russian soldiers, injuring four others (what a "successful" supposed shootdown). It also recognizes the massive attack against Ukraine.