Today a large police raid against an extreme right movement that was trying to carry out a coup in Germany is news.

A coup attempt by the Reichsbürger movement

The coup attempt was reportedly engineered by a movement called the Reichsbürger (Citizens of the Reich). Reading this, one imagines something similar to a repetition of the "Munich Putsch" carried out by the National Socialist Party in November 1923 and which ended with Adolf Hitler being imprisoned. However, the coup that was underway is far from having so many similarities, although it does coincide in its tremendous lack of realism.

Reichsbürger's contacts with Russia and the precedent of Catalonia

The ringleader of the coup would be a German aristocrat, known as Heinrich XIII, who contacted with the Russian Federation to attract possible support for the "new order" that this movement intended to establish in Germany. Russia has denied any connection to that movement, but let's remember that this is not the first time that Russian connections have been found in an attempted coup in a country of the European Union: let's remember that the separatist coup in Catalonia in 2017 also had contacts with Russia, which offered economic and military aid to the coup leaders in an attempt to destabilize Spain.

Reichsbürger: a strange and heterogeneous movement

Doing some research, what one finds is that the Reichsbürger is a very heterogeneous movement, which in 2018 was described as "weird and strange right-wing extremists" by a German media outlet. In this movement they come together from nostalgic for Nazism and the German Empire of 1871 with libertarians who refuse to pay taxes, fans of esotericism (something that already encouraged the promotion of Russian nationalist ideologue Aleksandr Dugin), sympathizers of the QAnon movement, anti-Semites and Holocaust deniers (born in the US and made up of Holocaust theorists the conspiracy), anti-vaccination, pro-Russians and also antifascists who declare themselves anti-Zionists, in the style of extreme left movements.

On the website Holocaust-Referenz, which offers arguments against Holocaust deniers, Jürgen Langowski pointed to Rüdiger Hoffmann, head of the staatlos.info website, as one of the visible heads of the Reichsbürger. Langowski points out that Hoffman often uses the spelling "NaZi", since "he does not refer to the National Socialists, but to the 'National Zionists'" This character supports the picturesque theory of that the Zionists (ie the Jews), controlled and financed Hitler and led Germany to its downfall. According to Hoffman's website, Hitler's mission was "to prepare the National Zionist Reich of Israel."

Langowski notes: "How convenient is that: if Hitler and his crimes can be attributed to the Jews, nazi Germany was the victim of sinister machinations. This perfidious inversion of perpetrators and victims is repeatedly taken up by right-wing extremists in different variants". Langowski also notes that "under the heading Timeline of Fascism, the word "genocide" appears on staatlos.info, but only in relation to Germany today, and not in relation to National Socialism". Likewise, he points out that "Hoffmann also demonstrated on August 29, 2020 and appeared as a speaker at a rally in front of the Reichstag. There, several participants tried to storm the Reichstag."

The Reichsbürger's support for Russian imperialism

In an article published in August 2018 on the Deutschlandfunk website Kultur, this photo appeared showing Hoffmann, on the right, at a Reichsbürger protest in front of the Reichstag. Hoffman and another member of his group are shown wearing Saint George Ribbons, a badge very common in Russian nationalism, and next to it is a flag of the Russian Federation. 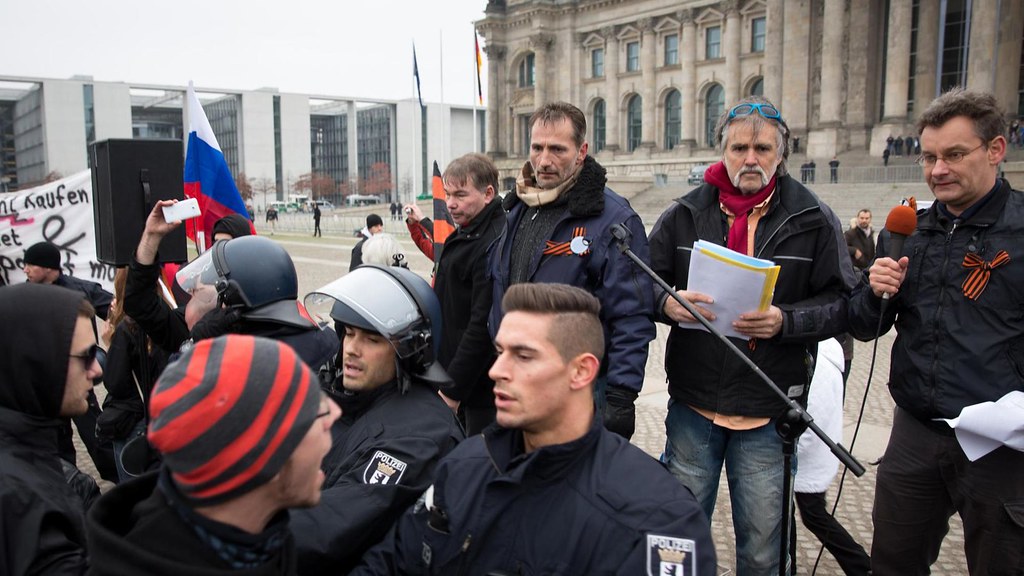 In October 2014, Hoffmann was photographed at another Reichsbürger protest in front of the Reichstag accompanied by two flags in the colors of the Russian Saint George ribbon, as well as a flag of the so-called "Donetsk People's Republic", one of the Donbass territories occupied by pro-Russian separatists and Russian military since 2014. 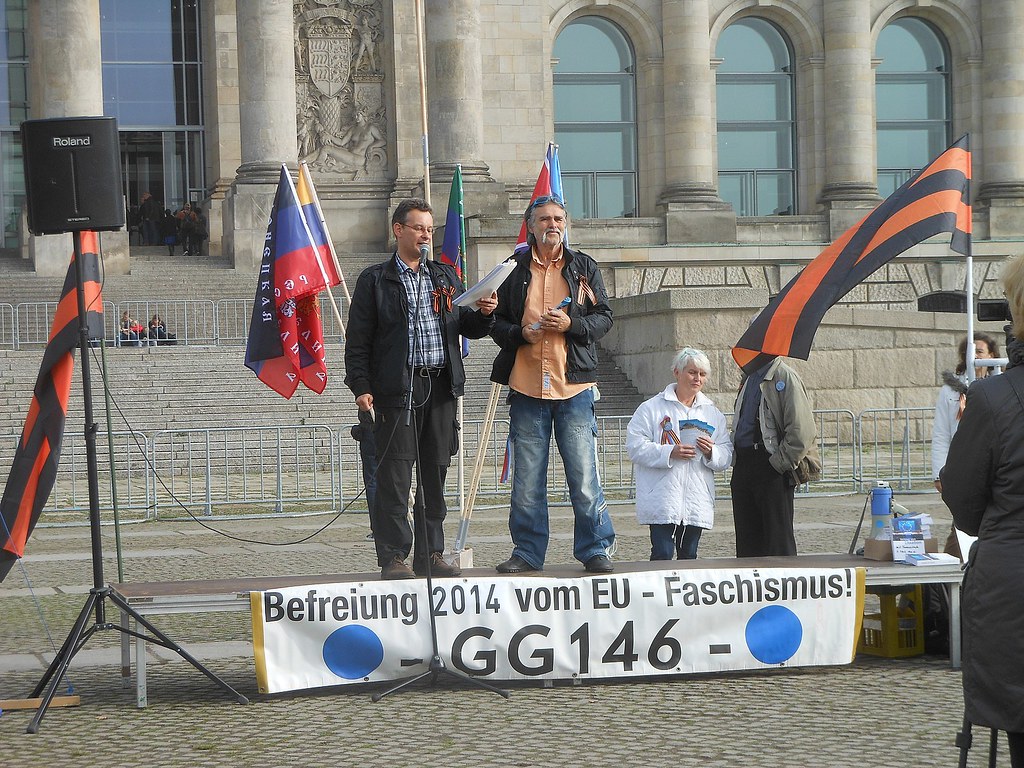 Recent contacts between the far left and the far right

As can be seen, at this protest a banner was displayed identifying the European Union with "fascism". This coincidence or overlap between left-wing extremism and what some describe as right-wing extremism is not something new: Communists and pro-Russian Nazis have been fighting together against Ukraine in Donbas for years. Likewise, in the Czech Republic the communists and the pro-Russian ultra-right have demonstrated together against a conservative government, headed by a member of the ECR, the European parliamentary group to which they belong to right-wing parties openly hostile to Russia such as the Polish Law and Justice and the Spanish Vox.

What happened in Germany should serve as a warning against a certain extreme right that has no qualms about collaborating with the extreme left in support of Russia, a collaboration that stems from the efforts of the Kremlin propaganda media to influence both extremes and use their anti-American and anti-liberal positions to Putin's advantage. It is very profitable for Russia to sponsor and promote these extremist groups without the need to control them from within, since encouraging them helps to >create instability in democratic countries, which is what the Putin government has been doing for years.