The left has tried to link Vox to the Putin regime for the mere fact of being a conservative party. A report denies those accusations.

Poles and Lithuanians, the strongest against Russia; French, Greeks and Cypriots, the least

This Thursday, VoteWatch Europe, an independent European NGO based in Brussels and dedicated to monitoring the activity of politicians in the European Parliament, published a report entitled "EU-Russia: latest trends among EU political parties", which is an analysis of the actual votes cast in the European Parliament since 2019 in relation to Russia. The analysis has been done by parties and national delegations. Regarding the latter, the report concludes: "Poles and the Lithuanians are, on average, the most critical of Russia in the European Parliament, followed by the Romanians. On the opposite end, French, Greek and Cypriot MEPs are, on average, the least critical of Russian actions."

The conservative ECR, the group most critical of Russia

Contrary to what the left usually claims, the report reaches the following conclusion: "Centre-right EPP and ECR factions are (and have been) the most critical of Russia and have proposed the toughest EU sanctions and actions. On the other hand, the radical left and the nationalists are (and have been) the most accommodative towards Russia, but some of these parties have substantially altered their positions." The ECR is the Group of European Conservatives and Reformists, and the EPP is the European People's Party.

In fact, the report points out that "the parties most critical of Russia are found within the ECR group", specifically citing its delegations from Central and Eastern Europe: Poles, Czechs, Lithuanians, Latvians and Croats, and also mentioning Sverigedemokraterna (Sweden Democrats) and Spanish Vox. According to the report, ECR member parties are the strongest against Russia in 8 European countries: Croatia (HS), Latvia (NA), Lithuania (LLRA–KŠS), Poland (PiS), Spain (Vox), Sweden (SD), the Netherlands (SGP) and Italy (FDI).

The report also lists among those most critical of Russia the European People's Party partners of Poland, the Czech Republic, Slovakia, Romania, Bulgaria, Slovenia and the Baltic states, along with the Maltese and Swedish members of the same group.

On the opposite side, the report cites The Left group, "especially the communists from Portugal, Cyprus and Czechia, but also the Spanish Izquierda Unida and the Irish from Independents 4 Change", among the least staunch and even among the supporters of a rapprochement with Russia. The report also includes Identity and Democracy (whose main partner is Rassemblement National, Marine Le Pen's party) and some independent parties in this group.

In the aforementioned group of The Left (also known as the European United Left, GUE/NGL) is the most pro-Russian party on the Iberian Peninsula, the Portuguese Communist Party (with 6.56%), which is also the third most pro-Russian party of all the EU parties analyzed in the report. The member parties of The Left are the most pro-Russian in 10 European countries: Portugal (PCP), Cyprus (AKEL), Netherlands (PvdD), Spain (IU, Podemos), Ireland (I4C, Sinn Féin), Germany (DL) , Belgium (PTB), Sweden (Vänsterpartiet), Finland (Vas) and Denmark (Enhedslisten). 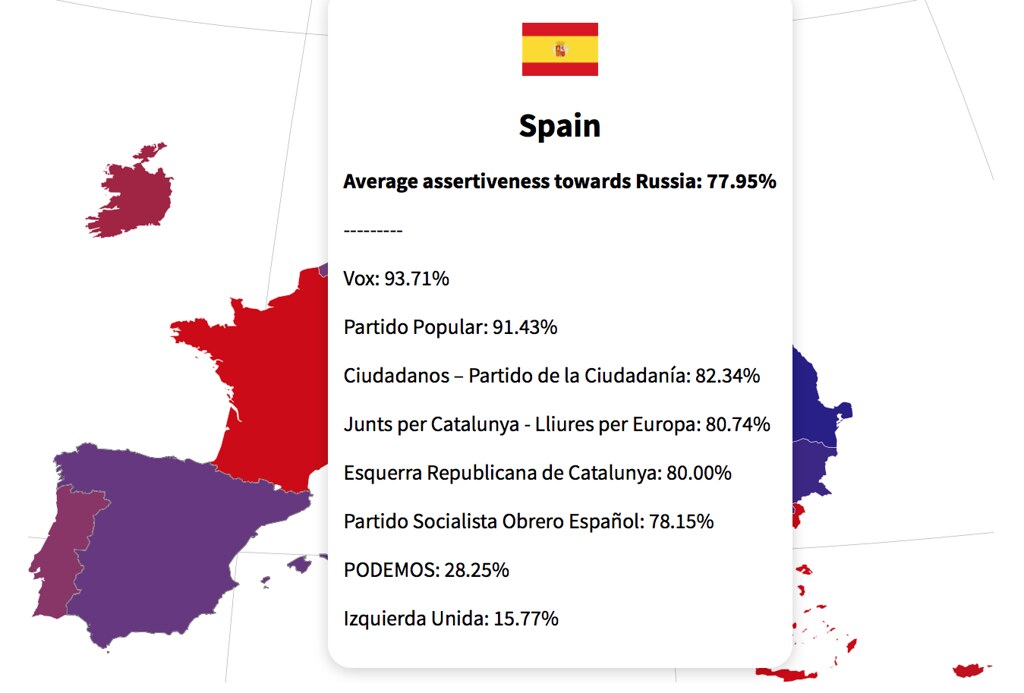 The report's analysis of the firmness of the Spanish parties against the Putin regime. Vox and the PP appear as the firmest. Izquierda Unida and Podemos appear as the least firm (Source: VoteWatch Europe).

Vox, the Spanish party hat most opposes to Russia, followed by PP and Cs

The report includes a country-by-country map showing the data relating to the parties in each country (in the case of larger countries, it only includes those parties that have at least two MEPs). The average firmness of the Spanish matches against Russia is 77.95%. Vox is the strongest Spanish party against the Putin regime, with 93.71%, followed by the Popular Party (91.43%) and Ciudadanos (82.34%). To give us an idea of the degree of firmness of the party chaired by Santiago Abascal on this issue, in 16 European countries (including three of the largest: Germany, France and Italy) there is no party with a score as high as the by Vox.

IU and Podemos, the most pro-Russian parties in Spain by far

On the opposite side, Izquierda Unida (IU) is the most pro-Russian party (15.77%), followed by Podemos (28.25%) and the PSOE (78.15%). The paradox is that precisely these three parties are currently in the coalition government chaired by Pedro Sánchez, that in a few days will host the NATO Summit in Madrid. The data in this report is a terrible business card for the Spanish government at a time like the present.